George Merkle was the pseudonym of George A. Marko according to Who’s Who of American Comic Books 1928–1999. Anton George Marko was the name on his World War I draft card and his birthdate was recorded as September 2, 1900. I believe the year is incorrect because a passenger ship list, at Ancestry.com, listed a Slovakian, “Antal Marko”, who arrived in New York on July 13, 1903. His age was 10 months old so his birth was in September 1901. Also, his age in the censuses made his birth year either 1901 or 1902. I would say his birth was September 2, 1901.

The 1910 U.S. Federal Census recorded his name as Antonio who was the oldest of three children born to Antonio and Helen; he and his parents were Hungarian emigrants while his siblings were born in New Jersey. They lived in Elyria, Ohio at 129 Quincy Street. His father was a factory machinist.

Marko signed his World War I draft card on September 12, 1918. He lived at home which was in Cleveland at 10050 Hulda Avenue, and his occupation was a clerk employed by W.P. Southworth. Marko’s description was tall and slender with blue eyes and brown hair.

In 1920 he, as Anton, was the oldest of five. The family remained in Cleveland but at a different address, 10412 Hulda Avenue. Marko was a timekeeper at a furniture factory. The Cuyahoga County, Ohio, Marriage Records and Indexes, 1810-1973, at Ancestry.com, recorded his marriage to Florence Nickel on January 30, 1924; on the certificate his name was “George A. Marko.” The 1926 Cleveland City Directory listed him at 10412 Hulda Avenue, the same address as his parents, and his occupation was a clerk at the Kroger Grocery & Baking Company. The 1928 directory had the same address but his job was “assembler”, the same as his father.

Who’s Who said he was a mimic in vaudeville. That was confirmed several times in the Cleveland Plain Dealer, beginning May 23, 1926: “…The women’s auxiliaries of the Brooklyn and Deckert-Watterson posts of the American Legion will sponsor a joint entertainment for the ex-service men at Warrensville Thursday evening….Those participating in the program are Miss Nova B. Nahm, soprano; George Marko, mimic; Earl G. Guscott, magician; Howard De Gant, violinist….; August 19, 1928: “…George Marko of Cleveland got a big hand with his barnyard imitations….”; December 15, 1929: “…Cleveland Post No. 2 band will play carols and Christmas numbers. Earl Guscott, magician of Brooklyn Post No. 223, and George Marko, barnyard impersonator, will perform, and Erling C. Theller of Glenville Post No. 130 will substitute for Santa Claus….; December 23, 1929: “…They listened to the Legion band, heard George Marko imitate animal calls…”

In 1930 Marko and his wife had two daughters and lived in Cleveland at 1444 East 93 Street. He was a retail salesman who sold silk.

Information on his education and art training has not been found. He may have taken correspondence courses or may have known some Cleveland cartoonists and gotten advice from them. In the late 1930s his comic book career began. Using the name George Merkle, his first creation was the Master Mind which appeared in Detective Picture Stories, January 1937; Funny Pages, January 1938; Amazing Mystery Funnies, August 1938; and Keen Detective Funnies, August 1939. The sporadic appearances of the Master Mind suggests the stories were used as fillers.

It's not known how often he performed during the 1930s, but he was mentioned in the Plain Dealer, November 17, 1939: “Patricia Bloor, tap dancer, headlines the new stage show at the Metropolitan Theater tomorrow night. Others in the show include George Marko, master of ceremonies; Lou Welston, harmonica player, and Betty Ferrell, contortionist.”

According to the 1940 census, Marko was in Cleveland at this address, 9521 Lamontier Avenue. He had an eighth grade education and was currently employed as a paint sprayer at a manufacturer of pipe threading equipment. A World War II draft card or military record has not been found for him. He was naturalized March 26, 1943 under the name, Anthony George Marko.

With some comic book work under his belt, Marko sold Hy Score to the Chicago Tribune Comic Book; his character ran from June 30, 1940 to October 31, 1943. Next, he found work with comic book publisher Fawcett and produced a large volume of Dopey Danny Dee filler material that occupied a page or less. The character continued to appear five years after Marko’s death. It’s not known he if traveled to Chicago and New York City to sell his works. Evidently, he kept his comics credits to himself, as any mention of it has not been found in the Plain Dealer.

In addition to a day job and freelance comic book work, he continued his stage appearances according to the Plain Dealer. 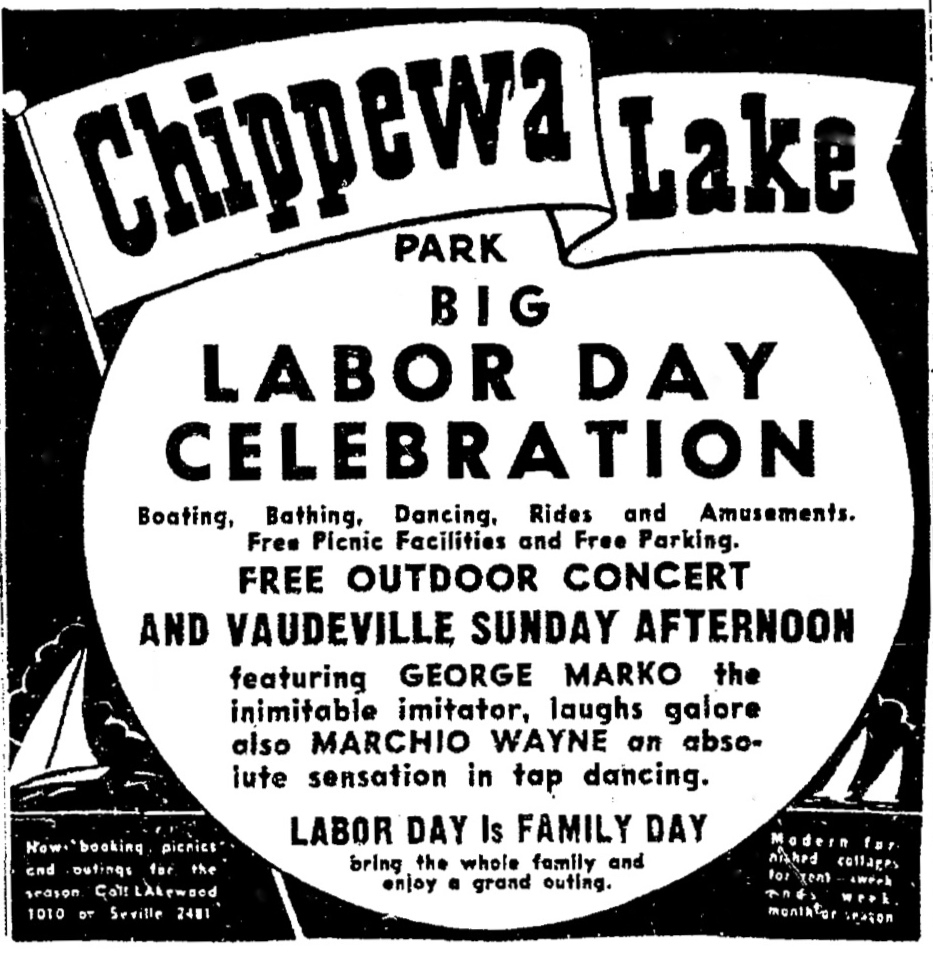 Five acts of vaudeville are being booked by Frank L. Cost, manager, for the occasion. Appearing on the stage today through Tuesday are Paul Kohler, xylophonist; Lucille Mahoney, dancer; George Marko, barnyard imitator; Marion Kerrigan, in songs and taps; Billy Hill at the piano and Bert Dagmar as master of ceremonies.

July 8, 1944
Restauranteur Frank Monaco will bring back Placida, an operatic songstress, for his floor show at Monaco’s Cafe tonight. With her are appearing George Marko, a hillbilly performer, and Gwen McClellan in dances.