I hope you enjoyed the last month of posts about the Chicago Tribune Comic Book and its creators. I know that Alex and I enjoyed doing the research to bring the series to you. If you really, REALLY enjoyed the comic book features themselves, you might drop a line to the good folks at IDW Publishing expressing that interest. I talked to editor Dean Mullaney about doing a book of these features, and he felt they were a mite esoteric to warrant a book. He's probably right. But if there was an upwelling of fan interest, well, you just never know.

I really enjoyed getting the feedback on this series as I learned a lot from you folks as well. Given the level of knowledge out there in the readership, it has long ago stopped surprising me that you folks took me behind the woodshed on a few points.

First there was the question about the identity of the Bucks McKale creator. Used to be that the smart money was on Vin Sullivan,  until Alex Jay practically pulled a rabbit out of his hat, finding a cartoonist named E.B. Sullivan who was known to sign his work as Sullie. Although we don't know for sure if either of these gents is the creator, at least the puzzle is now on the web, where perhaps others will continue to weight in with evidence.

The bigger bombshell, and it only came to light very recently so that the posts do not reflect it, is that the Chicago Tribune Comic Book lasted longer than I believed. Y'see, I had this crazy idea that the research about the Comic Book features was best done with the microfilm of the Chicago Tribune. Foolish, foolish me. Turns out that while the Tribune itself gave up on the comic book format itself in April 1943, and the former comic book features petered out in their regular comics section over the next six months, the Tribune's clients weren't quite so cavalier.

Only a few papers other than the Trib are known to have run the comic book. The Los Angeles Times and the Boston Post did, and I would bet that the Detroit Free Press did, although I don't have any samples from that paper. It never occurred to me to spend any time with these papers in regard to researching the comic book, and that was a mistake.

The Los Angeles Times comic strips are indexed on Dave Strickler's website. If I'd bothered to just pay attention to what is there in black and white, it appears that the Times ran the comic book section intact for three months longer than the Tribune, cancelling it and all the features on July 4 1943. That means that while for many of the comic book features I still have later end dates, for the ones that the Trib dropped shortly after the end of the comic book section itself, like Bucks McKale, the Times is a source for additional episodes.The other difference in the Times is that they did not run Lew Loyal except on one isolated occasion. It appears that in the LA Times comic book, Brenda Starr stuck around much longer than in the Chicago Tribune version, and Lew Loyal was not needed.


I only realized this because of a message from reader Cliff Erickson -- and Cliff had bigger news than that. He told me that he also had later dates on Tribune Comic Book strips from the Boston Post as well. Turns out that the Post, while they apparently had given up on the comic book format per se, kept the comic book features in their own separate section, not printed on a space-available basis in the regular comics section like the Tribune, to the bitter end.

Cliff told me that of his four scattered dates of the Boston Post comic book section, his latest was October 3, and that the section still ran Bucks McKale, Speed Berry and The Whizzer, all of which had been gone for varying times from the Tribune. Like the LA Times, the Post did not run Lew Loyal, but rather used Brenda Starr as their headline strip.

It seems obvious then that the Chicago Tribune, while having given up on the comic book section itself, was meeting the demand (or contract requirements) of a few client newspapers for it. Based on the last episodes that run in the Tribune itself, it seems likely that October 31 might very well have been the final edition of the comic book section offered to clients. Or maybe November 14, or maybe even later. The only way we could know for sure is to; first, determine when the Boston Post last ran its comic book section, and second, cross-reference the last episodes printed between the Tribune and the Post, And third, hope that no other paper was still running the doggone thing!

Although I have spot-indexed the Boston Post of the 1940s, I have nothing in my notes indicating that I saw these comic book sections. That may be because they weren't microfilmed, or it might be because I had no interest in them since I thought I was already in possession of definitive information from the Tribune. For now the research path is cut off as I don't see myself getting back to Boston anytime soon to check that information. Any Boston folks reading this who would like to try their hands at some research work?

By the way, Cliff Erickson tells me that the sort-of-superhero that took over the Mr. Ex strip, The Whizzer, appeared to be printed on a consistent basis in the Post. Here is the last episode he has, from October 3, Thanks again Cliff!! 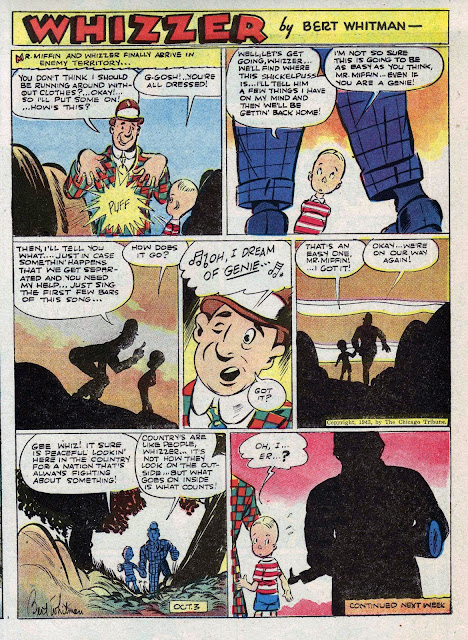 Comments:
Hi Allan -- Love the blog and we be happy to do some Boston research ....could you let me know how to get in touch with you? Thanks.

Hi Brad --
Very glad of the offer to help! You can email me at stripper at rtsco.com.