Lorenzo Warner Ford was born in Walworth, New York, in December 1866. His full name was reported in the Pawling Chronicle (New York), September 26, 1935. His birth date was recorded in the 1900 U.S. Federal Census, and his birthplace was mentioned in the Syracuse Herald (New York), May 15, 1925.

In the 1870 census, he was the youngest of eight children born to Loami and Jane. His father was a farmer. They lived in Palmyra, New York.

The 1880 census recorded him, his widow mother and three siblings in Walworth, New York. Information regarding his education and art training has not been found.

The Herald said Ford started at that paper in 1891. He was an artist, according to the 1892 New York State Census, and resided with his wife, Cora, son, Leon and mother in Syracuse, New York.

The 1900 census showed that he remained in Syracuse but at another address, 1109 Spring Street, with his wife and two sons, Glen and Ellsworth. Ford continued work as a newspaper cartoonist. 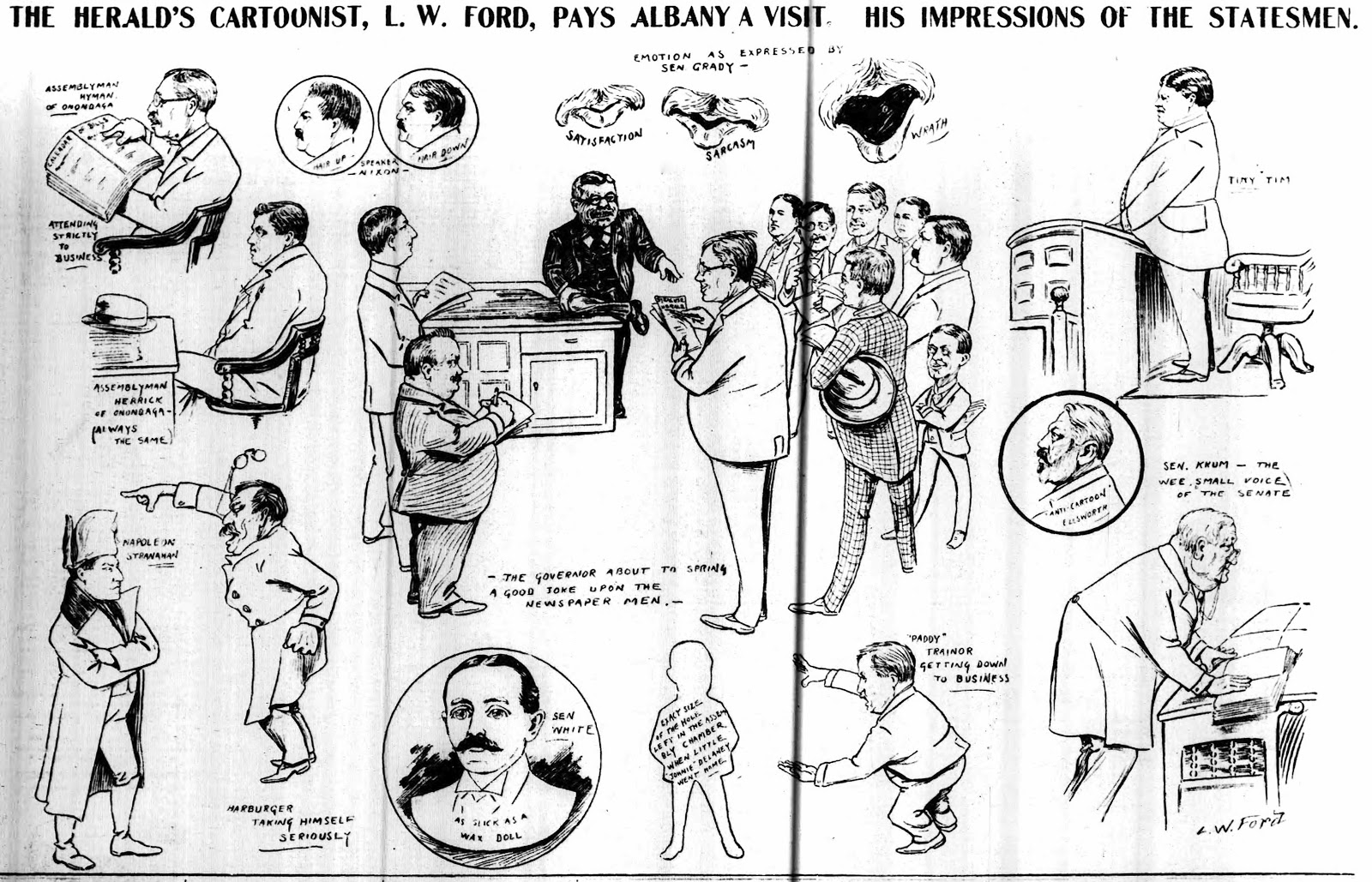 The Evening Telegram (Syracuse, New York), June 2, 1902, noted the passing of his wife: “Mrs. Cora J. Ford, wife of L.W. Ford, died yesterday at the family home, [illegible] Baker avenue at 37 years of age. The funeral will be held at 1:30 o’clock tomorrow afternoon from the family home.” The Herald said: “…Mr. Ford left The Herald upon the death of his wife, in order that his two little sons should be near his relatives, who lived near Cortland. He took up Chautauqua work and afterwards was employed by the Evening World.”

He was portrayed in a cartoon (upper right corner) published in the Luyceumite & Talent, September 1911. 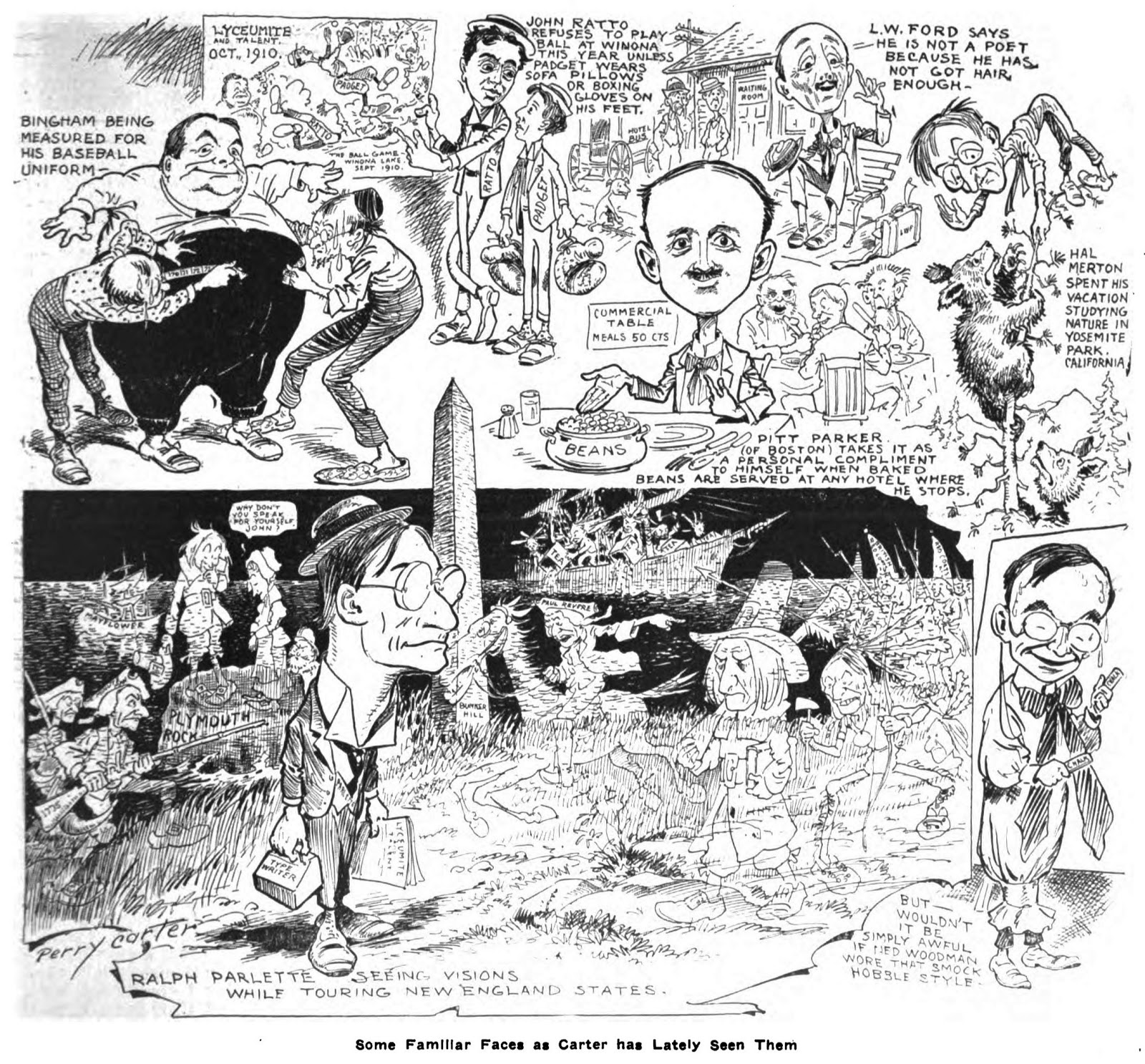 His visit to the West was covered in the Anaconda Standard (Montana), November 17, 1911:

Cartoonist’s View of Life Will Be Ford’s Subject
When L.W. Ford, the noted cartoonist, formerly with the Syracuse Herald and other papers appears at the Auditorium Saturday night under the auspices of the Young Woman’s Association of Butte, special interest will attach to the occasion because Mr. Ford does not limit his entertainment to drawing pictures for the amusement of his audience, but lectures upon life from the viewpoint of the cartoonist. He will take for his subject “The Panorama of Life.” Sunday afternoon he will lecture again in the Auditorium upon “The Moral Cartoon in Modern Parables as Applied to Practical Christianity.” Mr. Ford is on his vacation trip and lecturing in all of the larger cities of the West. 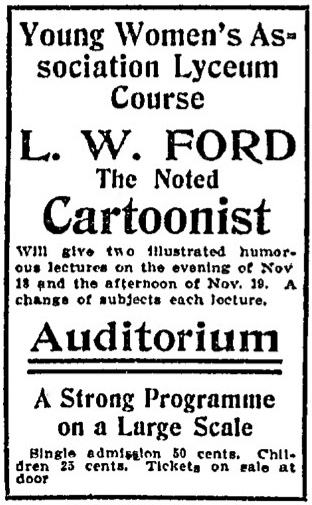 In 1913 and 1914 he drew cartoons, such as Broadway Ballads and Bobbie, His Dog and the Dogcatcher, for the New York Evening World. The Syracuse Herald, September 9, 1914, reported Ford’s change of careers.

Readers of The Herald of ten or fifteen years ago will be interested to learn that Lorenzo C. [sic] Ford, The Herald cartoonist for years, has just entered the Baptist ministry, for which he studied as a young man before taking up newspaper illustration.

At the time when he was associated with The Herald Mr. Ford was one of the most noted political cartoonists of his day. He had a marvelous knack of catching a likeness and a pencil that could depict a situation in a manner calculated to arouse interest and amusement. His cartoons dealing with State, national and international issues were widely copied and be ranked as one of the prominent cartoonists of the State. Governor Roosevelt declared that no man had ever succeeded in caricaturing him and catching his likeness as well as Ford, and wrote him a complimentary letter after which the artist sent him the original drawings of several of his most widely copied Roosevelt pictures, which the Colonel had bound with a number of others.

Mr. Ford left The Herald upon the death of his wife, in order that his two little sons should be near his relatives, who lived near Cortland. He took up Chautauqua work and afterwards was employed by the Evening World.

His sons are now in Oberlin college and a short time ago, Mr. Ford wrote to friends here that he was looking for some work in which he could settle down and make a home for his boys during vacation and when they had concluded their studies. On Monday his brother-in-law, Guy C. Taylor of Cortland, received a letter stating that through the influence of wealthy friends in New York he had received the offer of a charge at the flourishing Baptist church just outside the limits of Greater New York which would furnish him with congenial work and a comfortable income. The letter said that further details would shortly follow.

Ford passed away May 12, 1925, at his home in Wingdale, New York. His death was reported in the Syracuse Herald, May 15:

Lorenzo W. Ford
A career of large usefulness has ended in the death in the village of Wingdale, N.Y., of Lorenzo W. Ford. For twelve years prior to 1903 he was on the staff of The Herald as artist and cartoonist. He came to this newspaper from his native town, Walworth, Wayne County, after some preliminary experience in sketching for commercial enterprises, and began what proved to be a life of pioneering. Thirty-four years ago newspaper illustration was in its infancy, few publications have adventured in what was then a new field. The ambitions and the talents of “Loren” Ford found opportunity for expression and development with a pioneering newspaper and an extension in the path of progress was charted.

Subsequently Mr. Ford was seen and heard on the Chautauqua circuit, where his chalk talks were enjoyed by thousands in different parts of the country, and later—still the pioneer and adventurer in fresh fields—he became a clergyman, built a church, and with this he continued his life of service.

Few of Mr. Ford’s associates on the staff of The Herald remain. To those the news of his death is one of personal sorrow which is assuaged by the remembrance of a kindly personality, an artistic soul.

Ford—Died at his home at Wingdale, Dutchess county, N.Y., May 12th, Rev. Lorenzo W. Ford, aged 68 [sic] years. He is survived by his widow and two sons, Dr. Glenn R. Ford and Alger Ford. Funeral services were held at Wingdale on Friday and interment made at that place.

The deceased will be remembered by Fultonians. In 1903 he lived in this city; later he removed to Syracuse and was cartoonist for the Syracuse Herald. In 1914 he became a Baptist clergyman and has been pastor of the Baptist church at Wingdale for 11 years. He died suddenly from cardiac conditions that has suffered from for several years.

Resolutions of Respect
In Memory of Brother Lorenzo W. Ford, who Died May 12th 1925

Once again a Brother Mason, having completed the designs written for him on life’s trestle board, has passed through the portals of Eternity and entered the Grand Lodge of the New Jerusalem and hath received, as his reward, the white stone with the new name written thereon,

And whereas, The all-wise and merciful Master of the universe has called from labor to refreshments our beloved and respected brother,

And whereas, He having been a true and faithful brother of our beloved Order, therefore be it

Resolved, That Harlem Valley Lodge, No. 827, F. & A. M., of Pawling, N.Y., in testimony of her loss, be draped in mourning for thirty days and that we tender to the family of our deceased brother our sincere condolence in their deep affliction and that a copy of these resolutions be sent to the family.

Ten years later the Chronicle, September 26, 1935, reported his wife’s passing and her bequest:

Two Dover churches and a number of residents in Pawling, Dover and Wingdale received bequests in the will of Mrs. Anne Tabor Martin, formerly of Wingdale, who died Sept. 14th in Roxbury. The will was filed for probate with Surrogate Gleason last Thursday. The estate is valued at more than $10,000. Dr. Glenn R. Ford, of Endicott and John E. Mack are joint executors.

One fund of $2,500 is bequeathed to the Dover First Baptist church as the Lorenzo Warner Ford Memorial Fund, in memory of Mrs. Ford’s husband, the late Rev. Lorenzo W. Ford. This fund is bequeathed to “further the work begun by my beloved husband in connection with the Community House erected by my said husband and to aid and improve the social as well as the religious life of the community of Wingdale through the said Community House.”

A chronological list of Ford’s cartoons in the Evening World.