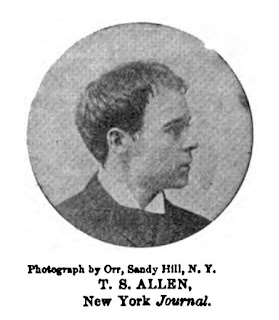 Thomas Stamps Allen was born in Lexington, Kentucky, in 1869, according to the book, Little Visits with Great Americans or, Success, Ideals, and How to Attain Them (1904; see second photo). In the 1870 U.S. Federal Census, he was the second of two children born to Thomas, a lawyer, and Harriet. They were part of the Thomas Stamps (Allen’s maternal grandfather) household in Lexington. The census, which was enumerated September 23, said Allen’s age was seven months, so he would have been born in February 1870.

His father was the head of the household in 1880, and he had four younger siblings. Residing with them were Allen’s maternal grandmother and aunt. They lived on East Third Street in Lexington. Of his childhood and education, the The Morning Herald (Lexington, Kentucky), May 18, 1902 said in its article, “Kentuckians Who Have Won Fame in New York”:

Two artists [Carl Schultze was the other] popular with Greater New York readers of the metropolitan newspapers are simon pure Kentuckians. One is Thomas S. Allen, whose studies of child life in the slums are so clever as to have won him the title, “The Phil May of America.”

Mr. Allen’s autobiography is Allenesque. “To begin,” he says, “I was born just as ordinary mortals are. This interesting event took place thirty two years ago [1870] on my grandfather’s farm near Lexington, Ky., now the property of Major Thomas, the well known horseman. From my grandfather I inherited a love of saddle horses, which, alas! the business of comic picture-making has never enabled me to gratify, and a very fine taste for whisky which I have gratified as time and opportunity permitted.”

With much protest against the use of the singular pronoun, for he is a genuinely modest man, Mr. Allen continued: “When I was a little lad I lived for four or five years in Louisville, where my father practiced law with his brother, Major Bryant Allen, and after that lived in Lexington. At Lexington I was a pupil of James Lane Allen, the novelist. I have three gold medals he gave me. I was a student of the Kentucky University, where I stood fairly well, I believe, in English and the classics, but like many another great man whose name has gone sounding down the corridors of time gave no particular sign of that mighty genius which has since set the world on fire.

“I read law in my father’s office for a while, and a very brief while it was, and then drifted into newspaper reporting in Chicago and Spokane, Wash., and then came to New York and wrote jingles and jokes for Judge and Truth for several years. Encouraged by the late Bernard Gillam, of Judge, and Mr. P. W. Arthur, once editor of Truth, I began to make my own sketches to go with my jokes, and so gradually developed into the most wonderful artist you know. Most of my stuff has to do with the little street gamins of New York. Their lives interest me because they are the saddest and bravest I know.”

“When I came on to New York I did not begin my career as an artist at once,” he said, as he graciously offered us a thousand-dollar Davenport couch, which was covering one of the eight-thousand-dollar rugs he obtained at the Yerkes sale. “I began as a writer.”

“Did you write novels or epics?” we asked.

“No. My ambition was higher. I wanted a more catholic form of expression. So I wrote jokes.”

We signified our admiration by an appropriate smile.

“But the trouble with jokes is that they must necessarily be anonymous. In other words, I was furnishing all the brains and the man who illustrated the joke was signing his name to the picture and getting the credit. All he did was to carry out my idea.”

We bowed appreciatively in consonance with his deep reasoning.

“And so I determined to do the pictures myself. I did forty of them, and one day took them to Life’s old office in Twenty-third Street. But my courage failed me. Besides, I had doubts as to the strength of the elevator to carry them up. And so I gathered together all of my available resources and invested in enough postage to mail them to the editor. Then I waited.”

“In the usual despair, we presume.”

“Hope, mingled with despair. They all came back—but one. It was entitles ‘The Young Girl Gazed Into Vacancy.’ By the way, it has never yet been published.”

“We are saving it for our special number entitled ‘Great Beginnings.’...

During class one time–it was perhaps in physics–he drew on the fly leaf of his book a group picture of the faculty going a fishing. Prof. C. L. Loos, the venerable president, was dressed in kilts, and the other members of the faculty were dressed in children's clothes. So perfect were the characteristics that each individual in the picture was easily recognized. Mr. Allen was then 15 or 16 years of age.

William H. Walker and Carl Schultze were the other classmates mentioned in the article. When asked about his art training, Allen said, in the Life interview: “Well, I studied for several years on the Sunday comic supplements of the daily papers.”

The exact dates of his time in Chicago and Spokane, and his move to New York City are not known. He was in New York in the early 1890s and married to Minnie Clark. Their daughter, Genevieve, was born in New York on May 23, 1893, according to the Social Security Death Index. At the time, his parents lived in Olympia, Washington. The Olympian, March 27, 1894 said: “Tom Allen, son of Mr. and Mrs. T.N. Allen, is making an enviable reputation as a sketch artist. He is the author of many of the caricatures in Judge.” Around 1897, he was on the staff of the Hearst newspaper, New York Journal, which published his first kid cartoon October 2, 1897. His Adonis Jimmy was a panel with a recurring character; it ran in the Journal from August 31 to November 15, 1898. A photo of Journal staff artists is here. 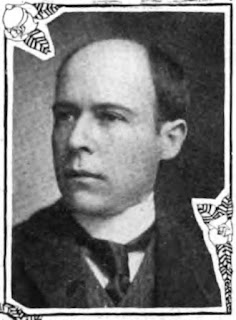 In the Literary Collector, September 1903, literary critic Percival Pollard wrote a tribute to the late Phil May and took a swipe at Allen.

Our debt of gratitude to May for the lift he gave black-and-white art in the general and critical estimation is so great that we can afford to forgive him for unconsciously being the cause of much art that was superfluous. When his style first began to attract attention, its superficial mannerisms were at once seized by many lesser artists. They forgot that in his work there was much that had been eliminated to save the essential; they fancied it was mere outline work, easy, yet effective. Some of these imitators owed their daily bread in this way to May for years, notably one American illustrator, T.S. Allen.


One of his drawings was published in How to Draw: A Practical Book of Instruction in the Art of Illustration (1904), and Caricature: Wit and Humor of a Nation in Picture, Song and Story (1911). 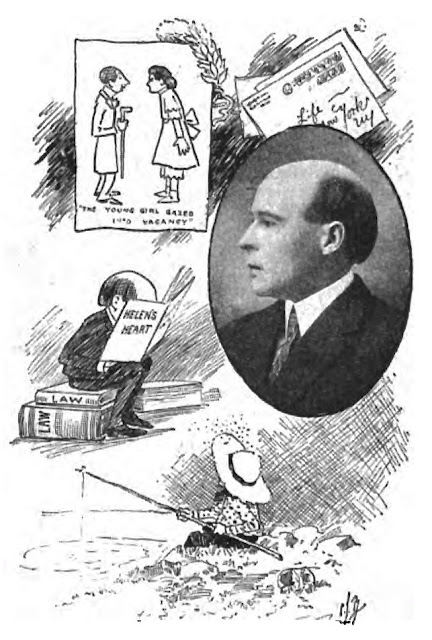 Allen has not been found in the 1910 census. In that year, Sandy Hill changed its name to Hudson Falls. The Olympia Daily Recorder (Washington), December 30, 1914, reported his daughter’s marriage:

Rockledge became his winter home, as noted in the Troy Times Record (New York), October 7, 1918: “After spending the summer as guests of their daughter, Mrs. Rollin T. Wright, Mr. and Mrs. Thomas S. Allen have returned to their winter home at Rockledge, Fla.”; and the Troy Times, June 14, 1919: “After spending the winter at their cottage at Rockledge, Fla., where they have an orange grove, Mr. and Mrs. T.S. Allen have returned to town to spend the summer with Miss Genevieve Clark.”

In the 1920, 1930 and 1940 censuses, he was recorded at Rockledge on River Drive, in the same house as his daughter’s family. He owned a fruit grove. The 1940 census said he had two years of college. Allen passed away November 25, 1940. His death was reported the following day in the Times Record:

He is survived by his widow, the former Minnie Clark of Hudson Falls; a daughter, Mrs. Rollin T. Wright of Rockledge, Fla.; two grandsons, two brothers and two sisters.

His wife, Minnie, passed away in 1959. Both were buried in Union Cemetery, near Hudson Falls, in the section and lot with her parents and siblings.

Comments:
TS Allen was my Great Great Grandfather. My family still owns the house in Rockledge, FL where he lived at the end of his life. I am an artist as well. Thank you for maintaining and sharing this history!