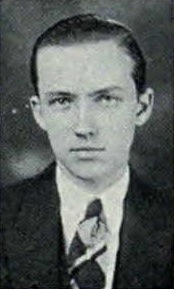 Wingate Chase Craig was born in Ennis, Texas on August 28, 1910. His birthplace was determined by examining census records; his birth date was in the Social Security Death Index; and his first name was recorded in the 1920 U.S. Federal Census and Social Security Death Index. In the 1920 census, Craig was the only child of Everett, a hardware merchant, and Mildred. They resided in Ennis at 408 Preston. It’s unclear what happened to their first son, Everett Jr., who was recorded in the 1910 census.

Craig’s cartooning career began at the age of 14 when the Dallas Morning News published his comic strips in the “Little Knights and Ladies Club” page.

Craig attended the University of Texas in Austin. In the school’s yearbook, The Cactus 1930, he was a member of the Delta Sigma Chi fraternity, and he contributed cartoons to the campus publication, Longhorn-Ranger Magazine.

The Craig family remained at the same address in the 1930 census.

GenealogyBuff.com posted Craig’s obituary from a Ventura County, California newspaper whose name and date were not included. It said he studied at the Chicago Academy of Fine Art from 1933 to 1934. Accepting a position with the Christian Science Monitor in Boston, he produced Little Chauncey for the newspaper. He moved to Hollywood in 1935; later that year his mother passed away, according to the Dallas Morning News, August 4.

Craig found work in animation first for Walter Lantz and then Tex Avery. His obituary said he “…drew a short-lived comic strip, ‘Hollywood Hams,’ for the Los Angeles Daily News. His talent was quickly recognized and he was hired to take over the Charlie McCarthy newspaper strip [Moritmer and Charlie], based on Edgar Bergen’s popular character.” In American Newspaper Comics (2012), Alberto Becattini said Craig worked on the daily Moritmer and Charlie from October 2, 1939 to May 25, 1940, and Sunday version from October 29, 1939 to February 25, 1940. And he did freelance comic book work for the Western Publishing Company. Collaborating with Fred Fox, they produced Odd Bodkins from June 16, 1941 to June 20, 1942.

Craig has not yet been found in the 1940 census. A military record at Ancestry.com said he served in the navy from September 1, 1942 to September 27, 1945. His obituary said he illustrated training manuals “at the Vine Street Pier in Hollywood.” In 1943 Craig married Mary Jane Green.

After his honorable discharge from the Navy, Craig did freelance writing for Western. In 1950, he was employed by Western as an editor, and moved up to managing editor and then executive editor. At the 1982 San Diego Comic-Con, Craig received the Inkpot Award for outstanding achievements in comic art. An overview of his career is here. A list of his comic book work is here. Sample pages of one of his scripts, illustrated with roughs and printed pages, begins here.

Craig passed away December 2, 2001, at the Los Robles Hospital and Medical Center in Thousand Oaks, California.