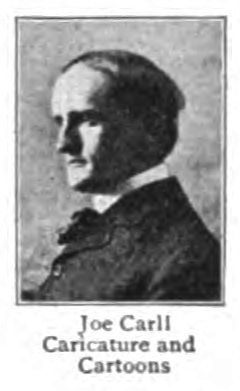 In the 1880 U.S. Federal Census, Carll was the second of three children born to William and Abbey. His father was a stage agent. The family resided in Jump Off Joe and Garlic Creek, Oregon.

The 1890 census is not available. The 1897 Portland City Directory listed Carll, his father and older brother, at 532 Clay. Carll was in the 1898 directory.

A new weekly has made its appearance bearing the title The Yellow Dog, and is a long way better that the title implies, for it shows no snarling, nor any disposition to be vicious. The tone of the whole is humorous and gives promise of avoiding that coarse satire which is the last refuge to decadent wit. The managers of the new venture, N.J. Bowden and Joseph Carll, have taken a path which leads them into rivalry with no other weekly in the City, and may possibly conduct them to fortune.

The Oregonian, June 12, 1898, published this item: “Joseph Carll, for the past seven months with The Oregonian art department, leaves today for Chicago.”

Carll was profiled in The Inland Printer, October 1899:

Who is Joe Carll? Most everybody will say, “Why, he’s an artist for the Daily News, Chicago.” But most people are prone to err. The Daily News is merely a newspaper on Joe Carll’s staff, and it serves a good cause. Few would suspect the truth. Mr. Carll is by birth and instinct half-savage. Twenty-three years ago he was born in a little Indian village in the southern wilds of Oregon. The village, Roseburg, long since reclaimed from the domination of the painted red man, was then the habitat of the unregenerate, scalp-taking North American Indian. Carll’s father was the famous mail contractor, William Carll, known all over the Pacific Coast as the man who carried dispatches to and from “the lava beds” nearly a quarter of a century ago, when the murderous Apaches, led by that daring chief of massacres, Captain Jack Held, hemmed in 300 regular soldiers of the United States army, of whom he slew two-thirds before relief reached that honeycombed grave.

At the age of eleven years, Joe took his father's advice and removed with the family to Lake View, another southern Oregon town containing fewer Indians but more whisky, and there he saw, for the first time in his life, a real human schoolmaster. He drew pictures of the pedagogue on the blackboard, and the birch across his well-worn knickerbockers. The dual works of art developed incompatibility of temperament, and one day, while fishing, Joe concluded school life might be tolerable after all, so he induced his parents to send him down to California, where he knew of a nice town, and there he learned to recognize his own name and perform other feats equally wonderful to the natives of southern Oregon when he returned home. Country life seemed very slow to him , however, when he got back to Lake View, so one day before breakfast he walked 128 miles to the nearest railroad, to take his first ride on the cars. For the last half of the trip he rode inside, and landed in Portland, a thriving village eighteen miles from Fort Vancouver, which is now on the military map because General Grant, then a second lieutenant, was once stationed there, and for the further fact, though he denies it, that Gen. T. M. Anderson, now in command of the Department of the Lakes, was, some years ago, colonel at that post.

On his arrival in Portland, Joe was taken ill. His malady was picture fever, and when he got a job in the office of Manager Holcomb, of the Oregon Railway & Navigation Company, he mutilated his books with cuts, varying in size from half column to full page, and Mr. Holcomb developed a potent desire for a new clerk. Joe passed the newcomer on the threshold, and that was their first and only meeting. Then the young man made three sketches, which he took to the chalk-plate editor of the Portland Oregonian. By accident they were printed, and Joe fell asleep, keeping awake till the paper came off the press. He has fallen asleep many a time since then over his pictures, but that time he had really done the work. His sainted mother woke him up, and he vowed he would not split wood; but when she pointed with tears, gleaming like diamonds, in her eyes, to Joe’s first printed pictures, “with his name to ’em,” boyish arms wound round mother’s neck and together they wept for joy. Long since then that experience became unique in his life. The appearance has ceased to be a novelty, and his arms, now stronger, wind round another neck than mother’s.

Three years before he had cast a vote the coming Benjamin contracted the gold fever and went to Alaska. Ten months, and that is a long time when one season is half a year in duration, he remained, or rather existed there. In that time he was a miner, cleaning up one run with the magnificent find of 30 cents. Then he was a bailiff one term of court, and was dismissed for carelessly drawing a jury. After that he was a clerk. Intending to enter a walking-match, he became a variety actor, and at this he made enough money to paddle a canoe out of the country. Most people regarded him as perfectly harmless, but he acquired a reputation for shiftlessness which sticks to him yet. He will not work all day on one drawing, no matter how small it is. He was next inquired for in San Francisco, where, properly disguised and misrepresented, he got a job as an artist on the Evening Post. His work was such that the Examiner took pity on the afternoon contemporary and hired him at a ridiculously advanced salary, and probably would be printing his pictures yet next to Lydia Pinkham’s woodcut had he not felt the spirit move him back toward Portland. This time he took a Pullman car and found it a novelty. Thenceforward his career has been the inevitable. Publishers who steal pictures have sunk so low as to pirate sketches made by Joe Carll, who made his debut in Chicago made his debut in Chicago shortly before the recent performance in which Spain played the part of the dying gladiator. With touching pathos, Mr. Carll disclaims any responsibility for that justly celebrated farce. He has been forced to admit responsibility for the Philippine rebellion since Aguinaldo was found studying several of his cartoons drawn before office hours while waiting for the city editor to reach the office. For a few weeks after reaching Chicago, Mr. Carll was a member of the Chicago Evening Journal staff. As a Daily News artist he became famous. The pictures presented herewith are shown by the courtesy of that paper.

Carll was a teacher at the School of Illustration in Chicago. 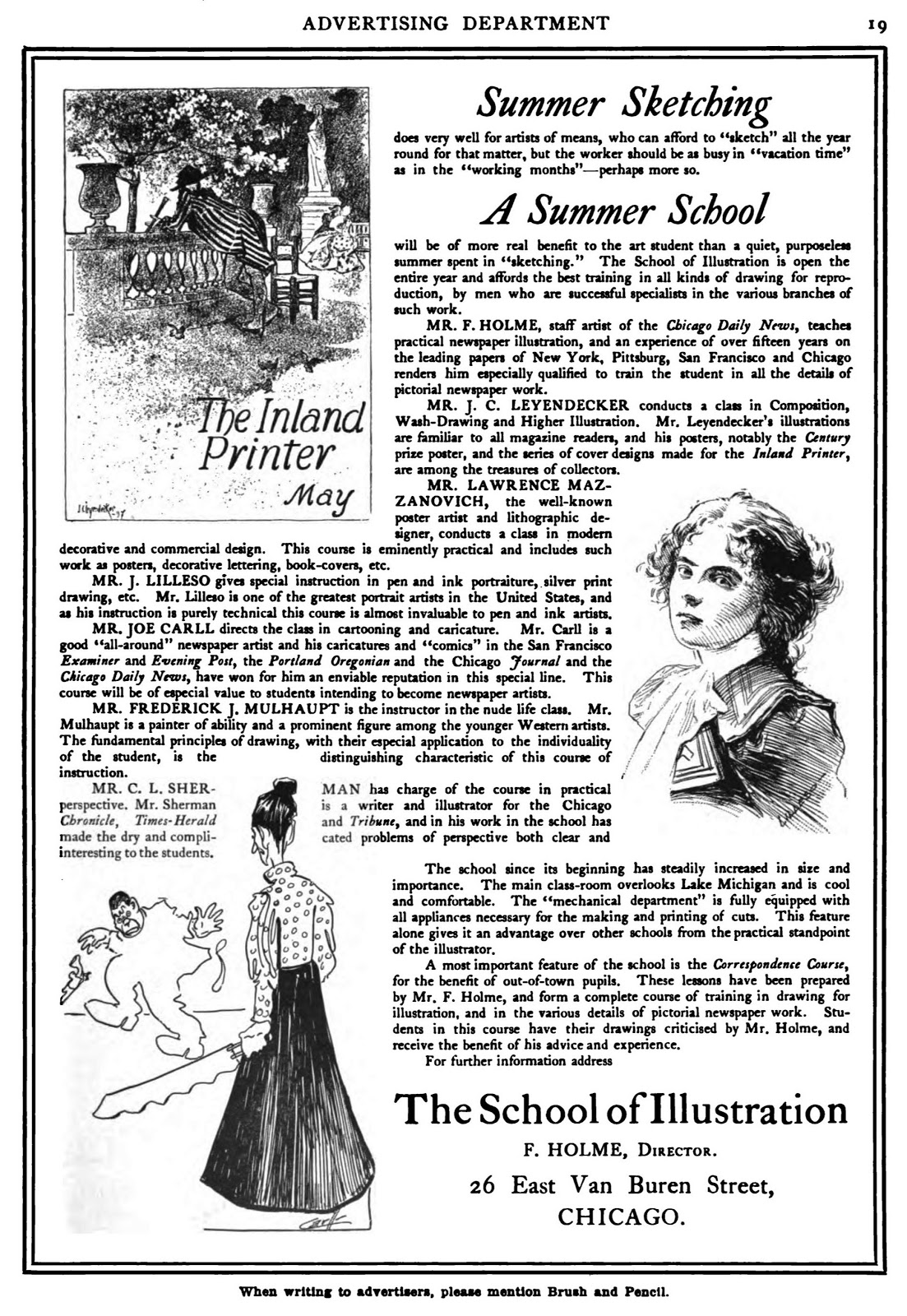 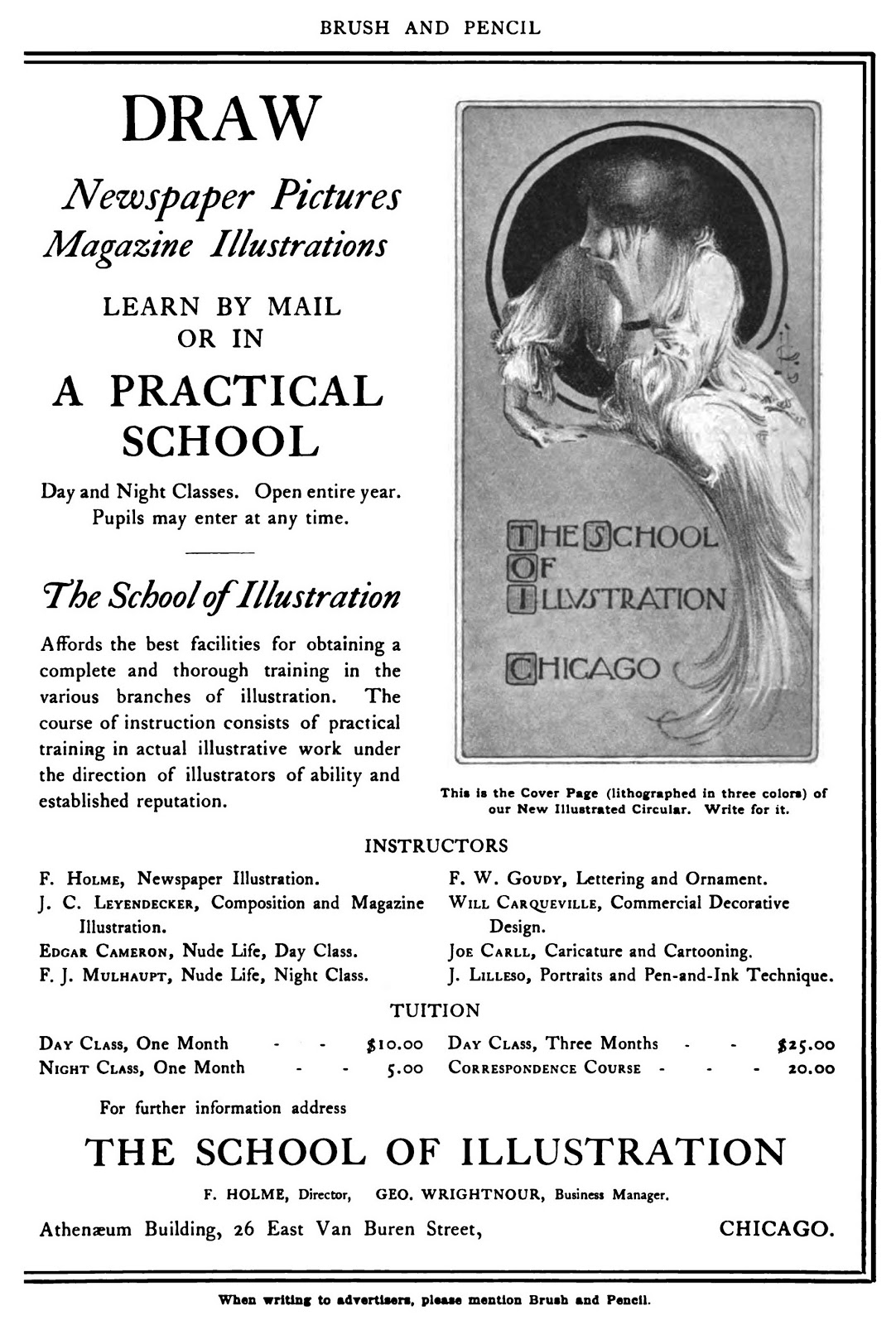 Carll has not been found in the 1900 census. According to the 1900 Chicago City Directory, he lived at 5626 Drexel Avenue and was an artist at the Daily News. According to American Newspaper Comics (2012) his panel, Side Lights of History, ran in the Daily News from July 21 to September 29, 1900.

The Cook County, Illinois, Marriages Index, at Ancestry.com, said he married Edith Maus on November 28, 1900 in La Grange, Illinois. Apparently there were marital problems as seen in a notice in The Oregonian, October 7, 1901:

To Whom It May Concern—I hereby give notice that I, Joe Carll, will not be responsible for any debts contracted by my wife, Edith Carll, on and after this 3d day of October 1901. (signed) Joe Carll.

The Oregonian, April 8, 1902, reported that delegates were gathering in Portland in preparation to depart for Hot Springs, Arkansas to attend the 17th annual meeting of the National Editorial Association. At the time Carll was with the Portland Chronicle.

At some point Carll headed east to find work. The Oregonian, February 9, 1907, reported the death of his father and said: “…He is survived by his wife and two sons, Dr. Frank Carll, of Helena, Mont., and Joseph Carll, a cartoonist, formerly in the employ of The Oregonian, but now working on an Eastern paper.”

The 1910 census, enumerated on April 15, recorded him and his mother in Portland, Oregon at 532 Clay Street. He was an artist working at home. A few months later, Carll passed away July 14. His death was reported the following day in The Oregonian:

He Is Ill But Two Days
As Cartoonist and Sketch Artist He Had “Made Good” on Papers in Some of Largest Cities—Numerous Friends Mourn Him.

Joseph Carll, newspaper artist and cartoonist, known to and beloved by every active newspaper man in Portland, died yesterday of apoplexy, aged 34 years.

Mr. Carll left his work in The Oregonian art department Monday because of slight illness. Even yesterday his condition was not regarded as alarming, but at 5 o’clock he was stricken suddenly and died.

Whole-souled generosity and good-fellowship were strongly marked traits of Mr. Carll which endeared him to his fellow workers. His friends in and out of the newspaper profession were legion. Always cheerful and kind, he was known to and esteemed by employees of all departments of The Oregonian.

Mr. Carll was born in Roseburg, Or., December 3, 1876. He was the son of the late William Carll, a well-known pioneer, who for years was superintendent of the California & Oregon Stage Company, operating stages between Portland and Sacramento. About 1886 the family removed to Lakeview and here the artist’s talent was first manifested through the mediumship of chalk and colors from discarded paint cans at the town wagon shop.

Later the family went to California and young Carll took a course in an art school. He then came to The Oregonian, but after a year or two was seized with an ambition to see the Eastern newspaper shops and went away. He worked for some of the best papers of New York, Philadelphia, Chicago and Denver, “making good” everywhere. He possessed a rare sense of humor, which found expression in his work, and his style in sketching and drawing possessed individuality and attractiveness. To him newspaper illustrating was not drudgery; it was the thing in which he took his greatest enjoyment. His sunny disposition was generally reflected in his sketching, his choice of subjects generally being bright and lightsome.

Mr. Carl is survived by Mrs. Abbie Carll, his mother, and Dr. Frank Carll, of Helena a brother.

Funeral services will be held Sunday at 3 o’clock at Finley’s chapel. Interment will be at Rose City Cemetery.