Victor Clyde Forsythe was born in Orange, California on August 24, 1885 according to the California Death Index at Ancestry.com and a biography at Taos and Santa Fe Painters. In the 1900 U.S. Federal Census, he was the only child of W.B. and Alice; they lived in Los Angeles, California at 1040 8th Street. His father was a salesman of general merchandise.

About his art training and early career, Taos and Santa Fe Painters said: “Having shown artistic promise as a boy, Forsythe studied at the Los Angeles School of Art and Design. In 1904 he took the train to New York to study at the Art Students League under Frank DuMond. He worked as a staff artist for Joseph Pulitzer’s New York World while attending classes, and later switched to W.R. Hearst’s New York Journal….”

According to the 1910 census, Forsythe had been married three years. He and Cotta lived in Manhattan, New York City at 640 West 139th Street. His occupation was artist in the business service industry. The 1915 New York State Census recorded the couple in New Rochelle at 150 Elm Street.

One of his World strips was the 1914 I’m Falling in Love with Some One. Taos and Santa Fe Painters said:

…He went on to work for a succession of Hearst papers, drawing briefly for the St. Louis Post Dispatch, and then the Los Angeles Examiner, before returning to New York in the nineteen-teens to work at the American. While at the New York American, Forsythe began to develop comic strips. Among his earliest were a gag strip about boxing called The Great White Dope, and a western series, Tenderfoot Tim. In 1918 he began his most successful strip, Joe’s Car [renamed Joe Jinks in 1928]…Living in New Rochelle, New York, Forsythe met a young artist named Norman Rockwell, and the two shared a studio that had once been owned by Frederick Remington.

His World War I draft card was signed on September 12, 1918. He lived in New Rochelle at 144 Meadow Lane. He was an artist–cartoonist at the Press Publishing Company, located at 63 Park Row, New York, New York. His description was tall and slender with blue eyes and brown hair.

In the 1920 census, the couple remained in New Rochelle at 154 Meadow Lane, where he was an artist and illustrator. According to Taos and Santa Fe Painters: “In 1920, Forsythe and his wife, Cotta, had given up New York and returned to southern California. Frank Johnson and his wife followed shortly, and the two artists built a studio in Alhambra which they shared until Johnson’s death in 1939….In 1923, Forsythe and Johnson founded the Biltmore Gallery at the Biltmore Hotel in Los Angeles to sell their work and that of their friends….” He had a studio in Fawnskin, California. The Alhambra City Directory 1922 listed him at as an artist at 200 South Wilson Avenue. 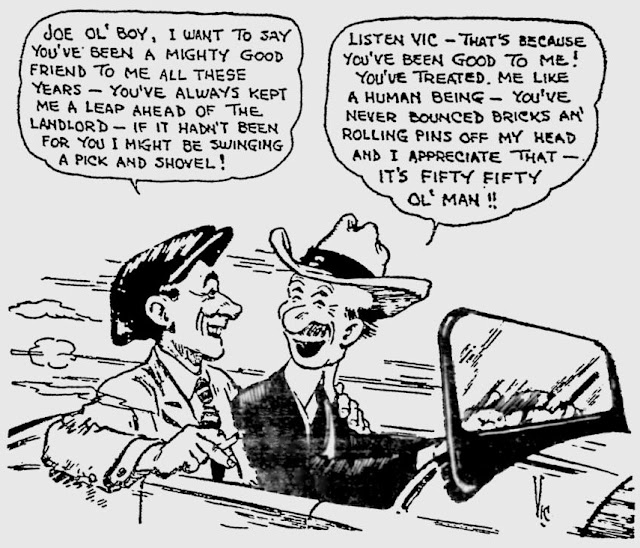 Detail of advertisement in the News-Dispatch 5/5/1937

They remained in Alhambra, at 520 Cordova Street, according to the 1930 census. According to American Newspaper Comics (2012) Forsythe created a golf strip called Divot Diggers which was the topper to Joe Jinks; it began on June 28, 1931. He stayed on to December 3, 1933 and then it was continued by Pete Llanuza and and Mo Leff. Forsythe returned May 7, 1937 until February 20, 1938 then Henry Formhals carried on through 1941. Taos and Santa Fe Painters said: “…Forsythe quit Joe Jinks in 1933 and began a cowboy strip titled Way Out West. He then added a home life strip, The Little Woman. Neither of these was very successful, and he returned to drawing Joe Jinks in 1937, but quit cartooning for good the next year.” The 1933 Thurston’s Pasadena City Directory listed him at 1449 Saint Albans Road.

The 1940 census found him at the same address where he was an artist and painter. About his painting career, Edan Hughes said: “…Forsythe immersed himself in the lore of the West and often lived in ghost towns while on painting forays. His subjects included desert scenes with prospectors and their burros as well as cowboy genre. His unique style of painting the sky and cloud formations became the identifying feature of his landscapes.”

Victor Clyde Forsythe of 1690 Ramiro Rd., San Marino passed away May 24, 1962. He was a native of Orange, California and had resided in San Marino for the past 20 years. Mr. Forsythe was a member of the Los Angeles Art Association, California Art Club, Salmagundi Club of New York City, Allied Artists of America, Pasadena Art Museum, Pasadena Society of Artists, American Institute of Fine Arts, Rancheros Visitadores and the San Gabriel Country Club. Survived by his wife Cotta Owen Forsythe and one nephew, Thomas R. Gay of Encino. Funeral services Monday at 11 a.m. in the chapel of Pierce Bros. Fred A. Turner, Alhambra, mortuary, Rev. Raymond Riebs officiating. Interment, private. In lieu of flowers friends may contribute to the Orthopaedic Hospital or their favorite charity.

Comments:
I have a comic strip dated Jan. 25, 1953 signed by Henry Formhals. Just cataloging it now...