Gerald “Jerry” Albert was born in New York City on November 13, 1917, according to Who’s Who Among Human Services Professionals (1992) and Who’s Who in Medicine and Healthcare (1999). His parents were Andrew Irving and Eleanor Walder, both Ohio natives.

In the 1920 U.S. Federal Census, Albert was the youngest of two children; his sister, Sylvia, was seven years older. The family resided in the Bronx, New York at 1728 Croton Park East. His father was an attorney, who had been a teacher according to his World War I draft card, signed in 1918.

The family of four remained in the Bronx but at a different address, 2775 Pond Place, as recorded in the 1925 New York State Census.

Five years later, the federal census listed the Alberts in the Bronx at 1840 Grand Concourse. In this decade, Albert enrolled at the City College of New York and graduated with a B.A. in 1938. He was the editor of the school paper, Mercury, and on the editorial staff of the yearbook, Microcosm. 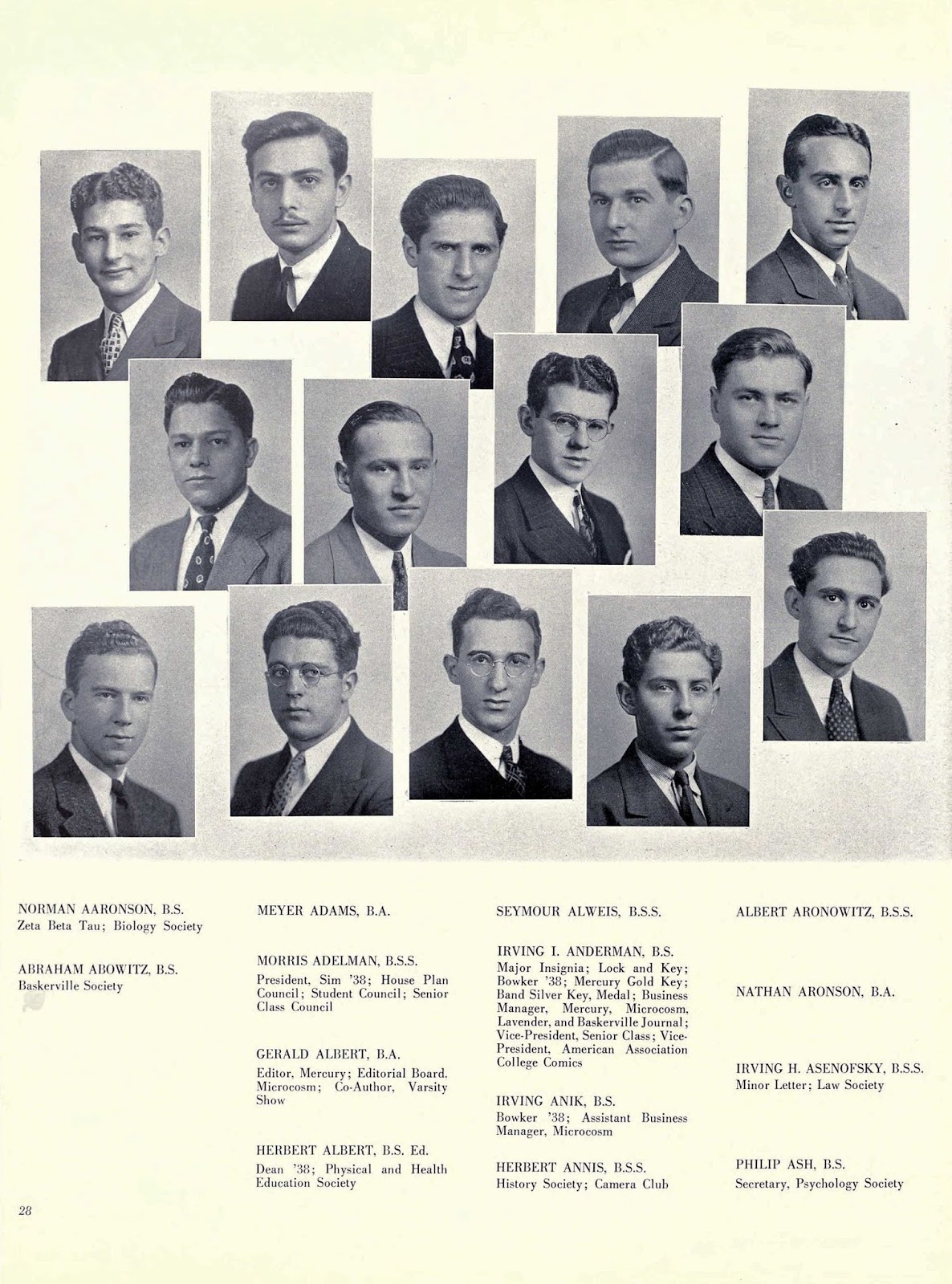 Albert is in the top row, far right

Later that year he earned his M.A. at the New School for Social Research.

According to Who’s Who, Albert was an editor at Vulcan and Creston Publications, in New York City, from 1939 to 1943. His next job was a writer for the Sangor Studio. In Joan Schenkar’s book, The Talented Miss Highsmith: The Secret Life and Serious Art of Patricia Highsmith (2010), there are several references to Albert, most prominently on pages 153 and 154:

In 1943, Gerald Albert, the twenty-six-year-old son of a smart lawyer-turned-pulp publisher who sold his wartime paper allotment to Ben Sangor, got himself a job writing comics for Sangor-Pines a few months after Richard Hughes hired Pat. Albert thinks his job may have been part of the paper-supplying deal his father made with Ben Sangor. However it transpired, Gerry Albert found himself sitting in the writers’ bullpen at Sangor-Pines two seats away from a “tall, dark, serious, attractive, rather remote young woman [with] good features” — like everyone else who met her at this time, Albert emphasizes how “good-looking” she was—named Patricia Highsmith.

…Gerald Albert, who later became a psychotherapist (his leading questions in the office to Pat — “You seem sad” — annoyed her), says he somehow formed the impression that Pat “was a homosexual.” He never heard a word about it at the office, but thinks his feeling may have been prompted by Pat’s rather severe style of dress, or by the “semimasculine disdain for the feminine” which seemed to emanate from her.

“But,” says Dr. Albert, “what I remember most is her ability to produce an enormous amount of material.”

The four other Sangor shop writers would come to the office, get their individual assignments from Richard Hughes — the assignments would be for different kinds of stories— and try to bat ideas around with each other, spinning out the time while they tested out their “gimmicks” or their story lines on themselves and on their typewriters. But Pat would come in and start typing — “Just like a machine,” says Gerald Albert, and he said it several times — the moment she arrived at the office. And she wouldn’t quit until it was time to leave. “As a producer of comics, she was a huge producer. And she was constantly producing stuff that was useful.”

Albert collaborated with Bob Oksner, Sangor’s art director and artist, on the comic strip, Miss Cairo Jones, which debuted July 29, 1945. According to Who’s Who, that same year, Albert was the national director of advertising for public relations at Universal Pictures’ division of educational films, in New York City, until 1950. From 1951 to 1964, he was executive director at Advertising Enterprises and Continental Research Institute, Queens, New York.

In 1964 Albert earned his Doctor of Education (Ed.D.) at Columbia University. During Albert’s career in psychology, did he meet psychotherapist, Claire Szep, who was married to the comic book writer, artist and editor Al Feldstein?

The New York Times, February 10, 1972, published the article, “What 40 Years of Counseling Taught Psychologist About Saving Marriages,” which was about Albert and his booklet, Choosing and Keeping a Marriage Partner. The syndicated article can be read in the OCR text box here. On February 22, 2000, the Times published his letter.

An overview of Albert’s comics career is here. Some of his comic book credits are here and here. I believe Albert currently resides in the New York City metropolitan area.

Just a note to mention that "Creston Publications" and the "Sangor Shop" are the same company.