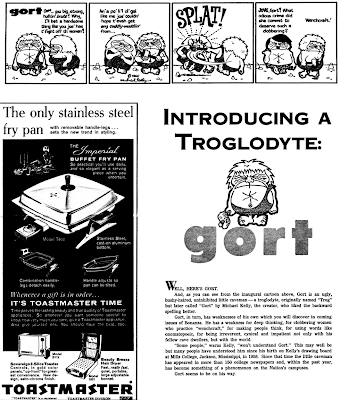 For a mystery strip, I know a fair amount about Michael Kelly's Gort. I know that it was marketed (almost) exclusively to college newspapers. I know that the strip debuted in 1958 in the school newspaper of Millsaps College in Mississippi. I know that the strip was syndicated to college papers as late as 1975, an extraordinarily long run for a college strip. I also know that it is a very entertaining and incisive strip based on the handful of examples I've seen, which were just augmented with an additional stack from Mark Johnson (thanks Mark!). Mark also discovered them running in papers much later than I would have imagined (he contributed the 1975 date).

Being a college newspaper strip, though, I don't really have any dire need for more info -- college papers are out of my scope of research. The problem is that in my files I have a single page (the bottom image) torn out of the San Francisco Chronicle's Bonanza magazine. As you can see from the article, they were planning on running the strip there. That makes it my business, since the San Fransisco Chronicle sure as shootin' qualifies as a mainstream newspaper.

This single undated page is the only proof I have that it ran in the Chronicle, though. And the page isn't even dated (though by the other content I have narrowed it down to probably being from late 1962 to early 1963). So I don't know how long it might have run in that paper, or if Gort ever made it to any other newspapers outside the college realm.

There's also the question of the creator. Outside of Gort itself and the few lines in the Chronicle, I have no information on Michael Kelly. It seems awfully strange that a good cartoonist whose strip ran for the better part of two decades left no other of traces of himself. But I come up dry. Even Alex Jay, who will move heaven and earth looking for a lost cartoonist, can find only that Mr. Kelly's short bio in the Chronicle was wrong -- Kelly attended Millsaps College in Mississippi, not Mills College (which is in San Francisco). Beyond that he cannot ferret out Mr. Kelly's whereabouts or other accomplishments.

Comments:
The same ad for the Toastmaster fry pan ran in the Oakland Tribune on 19 May 1963, so it's likely that it appeared the same day across the bay.

Thanks Mark! That exact dating will save me time when I next have access to Chronicle microfilm.

You just made my dad's day. He remembers seeing this strip in his college paper when he was a student!

Looking at this link, "Gort" also apparently ran in Jackson Daily News in 1963

I found a little more info on Michael Kelly in this link: