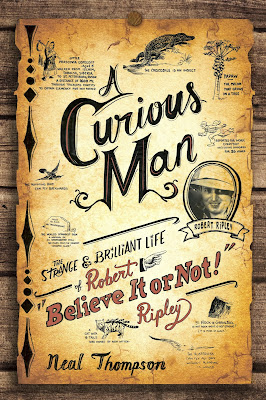 Cartoonist Robert Ripley had an interesting life that is well worth your reading time in this enjoyable biography by Neal Thompson. Thompson kept me entertained while telling the story of this fellow, one of the most widely recognized cartoonist names in the world. Of course, I imagine the general public today doesn't even realize he was a cartoonist before he became a radio host and iconic ringmaster to all the world's oddities.

In fact Thompson's skillful writing was so effective that I didn't realize until well after I'd finished this satisfying book that I'd been subject to a bit a of a whitewash, likely at the behest of the the Ripley Entertainment corporation. I did notice right off that nowhere in the book is it frankly admitted that Ripley used ghost artists. The closest we come is a remark that King Features was always freaking out over his lateness and on occasion a syndicate bullpenner had to dash off some cartoons at the last minute.

At first I ascribed that omission to simple lack of interest. This is a biography for a general audience, after all, not for cartooning historians, so perhaps the detail was not deemed important. But then I realized that Thompson also never seriously entertained the idea that Ripley was a bit of a creep for making a good part of his fortune off of freak shows. That seems an issue worthy of exploration.

Thompson acknowledges his huge debt to the archives of Ripley Entertainment, and I am left with the impression that Ripley Entertainment did not share all that raw material without exacting their pound of flesh from the author. That's a shame, but considering the wealth of source material that Thompson was able to bring to bear in this biography, I suppose it is an equitable sacrifice. Or perhaps, on the other hand, Thompson simply accepts Ripley at face value, and doesn't see any point in discussing Ripley's possible moral failing of making a very good living off of the deformities, eccentricities and misfortunes of others. I suppose there really isn't anything wrong with leaving it up to the reader to form their own opinion of Ripley's character.

Ethical qualms aside, Ripley's life is fascinating and Thompson tells his story very well. The facts of his cartooning career, and the background to newspaper cartooning in the early part of the century, are accurately reflected. Since I fact-checked an early draft of the book, hopefully I was able to help with that aspect. Thankfully Thompson doesn't gloss over his early cartooning years, as other biographers might, and his cartooning certainly doesn't get short shrift over his later more well-known exploits in radio and television.