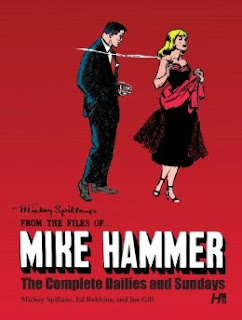 From the Files of Mike Hammer: The Complete Dailies and Sundays

Before I say anything else about this collection, I think the most important thing is to compliment the folks involved in this book for managing to put together a full run of this very rare strip. That, I can say from years of collecting, was no small feat. They deserve our respect for that accomplishment, no matter any other positives and negatives they'll accrue in the rest of this review.

First let's focus on the positive, of which there is plenty. To open the discussion I have to come clean and admit that I am not a big fan of Spillane's writing or of the hard-boiled detective genre in general. I bought the book primarily because I was so impressed at the fact that they were able to amass the strips and wanted to support the effort. I approached reading the strip itself expecting not to be too enthused. I also considered that the newspaper comic strip operates under one of the strictest informal codes of decency possible, so if I were a big Spillane fan, I could expect this strip to be much watered down from his usual work.

I was pleasantly surprised, then, to find that I quite enjoyed some of the stories. The early dailies, penned supposedly by Joe Gill, were pretty awful -- the plots were so badly constructed. But after Gill's tenure, the daily stories took a big turnaround, and I quite enjoyed the balance of the stories. Artist Ed Robbins says he wrote these daily stories, and I'm certainly glad he took the bull by the horns.

In fact, I'm going to commit heresy here. The Sunday stories, which were apparently penned by Mickey Spillane himself, except for the final one, are better than Gill's, but no match for Robbins' in my opinion. Spillane's stories are too loosely plotted, tend to have too many characters running around to keep track of, and rely incessantly on Hammer's supposed ability to instantly mesmerize women in order to keep the detective alive and point him to the who of the whodunit. On the other hand, Robbins' plots have all the standard Hammer tropes, but they play out in a much more satisfying, logical and inventive manner. Maybe Robbins should have considered a career in writing?

Ed Robbins' art is a great match for the material. The necessary dark and moody film noirish feel is handled perfectly. The character design of Mike Hammer (looking like Spillane himself) and the all-important sexy 'dames' look just perfect in this strip.

I do have a complaint. I really wish the Sundays had not been so garishly over-restored. I can appreciate the tremendous amount of work that went into these restorations, but I feel, and I think I follow the general consensus, that restorers should not remove the original 4-color dot screen colors and replace them with full-process colors. To do so is to subvert the intentions of the artist and colorist, whose plans with their art and color choices were based on how they expected their work to be printed.

Being a comics restorer myself, I have wrestled with this question. In the desire to do everything I can do to make the work look new and fresh, I too went through a short phase where I zapped all or most of the existing colors out of Sundays and recolored them myself. I quickly saw that this was a case of my ego overruling my duty to the material. While it is nigh impossible to restore the colors on old tearsheets to proof sheet quality, it is better to do what we can within the stricture of maintaining the original look of the work. Sunday comics are generally printed badly, and we probably just need to accept that, and recognize that we aren't living in the world of CSI. The recoloring of these strips is an especial shame, because I think the grittiness of Mike Hammer is perfectly suited to the rough treatment of newspaper coloring.

PS: It is worth noting that the strips in the book begin with the daily release of April 20 1953, and the Sunday release of May 17 1953. In an article in  Editor & Publisher (1/10/53), the initial release dates were given as March 9 and March 16 respectively.  I assumed those dates to be correct, and those are the dates I cite in my book, American Newspaper Comics. I'm satisfied that the publishers of this book have discovered the correct starting dates, so you might want to pencil that information into your copy of my book.

Comments:
Is there a missing Sunday strip? When the book was being put together there was a search for a strip that has never truned up.

Hi Tom --
You're quite right. They were unable to find one Sunday, and they admit that in the front matter. I didn't even notice the omission while I was reading, so they certainly did get lucky to miss a strip that wasn't making important plot points.

I never buy from Hermes again, after so many badly designed books and even worse paper choice. The recoloring faux pas sounds like something I would hate. I am glad of any review, because that gives me a chance to get the book after all (the strip interests me, you see). You did not mention there was a previous collection and how they compare. As for the recoloring, it is always a problem, certainly when the copy tyou have is so bad you would love to redo all the colors. I wish there was a photoshop program that did dot patterns.

I'm also a bit gun-shy with Hermes Press books, ever since I bought their complete Star Hawks book. I needed a magnifying glass to read those strips.
Are the Hammer strips printed in a decent size?
D.D.Degg

Ger -- Somewhere in the stacks I have those comic book Mike Hammers you refer to, but I'm pretty sure they were nowhere close to complete reprints. At least they failed to make any lasting impression on me. Anyone have them at hand and can tell us how much they actually reprinted?

Hi DD --
The reproduction is at a good size. The dailies are at original 4-column newspaper size (and crisp for most of the run, which came from proofs). The Sundays are slightly reduced from tabloid, but plenty big enough.

I trust your judgement on this, but I must concur with D D Degg, that Star Hawks book just crushed my spirit-- and the worst part was that they had plenty of room to play with.

It's not a true dot pattern with all the colours angled correctly but I've used it to recreate the texture of letterpress colour.

With Photoshop you can do perfect Benday dots.
Not so easy, but not so hard...

A few days ago I've written about it in my (Italian) blog:
http://testanellenuvolette.blogspot.it/2013/09/le-antiche-magie-del-benday.html