Marjorie Organ was born in Ireland on December 3, 1886. Her birth place was recorded in the 1900 U.S. Federal Census, which also said she was born in November 1886. However, there are several passenger lists, at Ancestry.com, that have the December 3, 1886 birth date, but, recorded New York as her birth place. According to the National Cyclopædia of American Biography (1916), her father’s name was John. Bennard B. Perlman, in his book Robert Henri: His Life and Art (1991), wrote: “…Her father was an artist of sorts, creating wallpaper designs for a living, a profession he continued after he brought the family to the United States…”

There are passenger lists at Ancestry.com with an “Ellen Organ” who accompanied her children, on three trips, to New York City. In 1888, Ellen arrived with Kate, Martin, Mary, Jessie, Christopher, Thomas. The 1892 passenger list named the same children with the exception of Jessie, who became “Tessie”, and Christopher became “Chrissie”. In 1894 Ellen traveled with Martin, Teresa, “Christe” and Thomas. Comparing these lists to the census, I would say that Jessie/Tessie/Teresa was Marjorie, and Christopher/Chrissie/Christe was Violet; maybe these were nicknames. The third visit was very close to the 1895 immigration year in the 1900 census.

Apparently, Organ contributed to some of the newspaper contests and activities for children and young adults
.

Perlman said Organ attended “St. Joseph’s School on Washington Square for a year. As was custom at the time, Marjorie entered the Normal College…” The New York Tribune, June 19, 1900, listed Organ (below) as one of 640 girls who passed the entrance exam for Normal College, now Hunter College.

The book, Robert Henri and His Circle (1969), was written by William Innes Homer who had access to an unpublished biography of Henri, who had married Organ in 1908. Organ’s younger sister, Violet, wrote the biography, some of which was used in Homer’s book. Regarding Organ’s education, Homer wrote:


The daughter of Mr. and Mrs. John Organ of New York City, Marjorie was a beautiful, vivacious redhead who left Hunter College in her freshman year to study art with Dan McCarthy, a newspaper artist who ran a study-by-mail school in the New York World Building. Recognizing her talent, McCarthy guided her into newspaper work, and when his school failed, he suggested she join the art staff of the New York Journal. And so she did, becoming the only woman (and a very young one) in an office of eight or ten men. Having embarked on a career as a cartoonist at the age of seventeen, she became well known as the artist of the comic strip, “[Little] Reggie and the Heavenly Twins,” which ran for three years in the Journal, and for her caricatures of theatrical personalities in the World….

When Henri met Organ it was March 1908. How it happened was the subject of a long article. 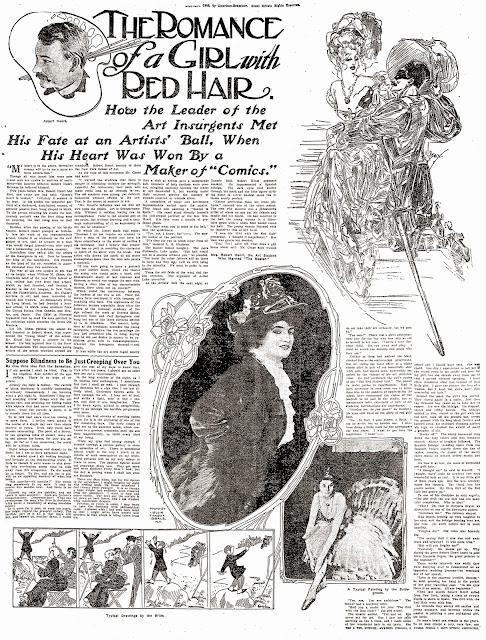 The New Orleans Item (Louisiana), August 2, 1908, published “The Romance of a Girl with Red Hair”, the a story of how Organ met Henri at a masquerade ball, the Artists' Ball, at Tuxedo Hall; below is an excerpt:


“Pardon me, do you pose?” he inquired, his eyes still fixed on the glory of red gold hair.

“No. In fact, I pose others, a little. I am an artist but an humble one. I have been doing a little work for the newspapers for two years. I want to get into the magazines. I hope.”

“Yes, yes. You are ambitious.” The master had a soothing voice.

“Had you a model for your ‘The Girl with Red Hair’?” the girl asked.

The master smiled. “Yes and no. She never sat for me. But I saw her each morning on the L train, and I made notes of her wonderful hair in my brain. She was a wee, scrawny, awkward creature, a school girl I should have said. She was timid. One day I approached to ask her if she would come to my studio and pose for my girl, but she shrank away from me so that I passed without speaking. I have often wondered what had become of that little girl. I gave the picture the face of a woman, but I kept the girl’s hair—that wonderful red hair.”

Behind the mask the girl’s lips parted. They closed again in a smile. Just then the tiresome boy came up to take her to supper…

He saw it at last, the mass of burnished red gold hair.

“I thought so,” he said to himself. “I thought there could be nowhere else such wonderful hair as that. It is my little girl of three years ago. But the wee, scrawny figure has ripened. The timid face has grown serene. My little Girl of the Red Hair has grown up.”

To one of his disciples he said eagerly, “The girl with the red hair and the beautiful complexion. Who is she?”

“That? Oh, that is Marjorie Organ, an illustrator on one of the downtown papers.”

“Introduce me.” The follower obeyed.

Miss Organ, looking up with laughter in her eyes, saw the hidalgo bending over her. She rose. He knelt before her in mock humility.

“Forgive me.” His voice was beseeching.

“For saying that I was wee and awkward and scrawny? It was quite true.”

“But will you forgive me?”

“Certainly, Oh, please get up. Why should the great Robert Henri kneel to poor little Marjorie Organ, the great painter to the beginner?”

Three weeks later—it was while they were hurrying over to Connecticut on an impulsive wedding journey—he reminded her of her speech.

The newspaper account of Henri and Organ’s meeting was a fanciful fabrication. In the Delaware Art Museum 1980 exhibition catalogue, City Life Illustrated, 1890-1940: Sloan, Glackens, Luks, Shinn—Their Friends and Followers, was this reaction: “When the news reached the press, an article about the romantic marriage of Henri to a ‘comic artist’ was printed, but [John] Sloan declared it ‘ridiculous and untrue.’ ”

In Robert Henri: His Life and Art, on page 86, Perlman wrote:


…The July 19 Sunday edition of the American-Examiner carried a story about his supposed courtship, headlined: “The Romance of a Girl with Red Hair,” which placed his meeting with Marjorie at a masquerade ball….

Henri was sent a copy of the newspaper story, complete with pictures. “Not one word was true,” was his only comment, and that included the location of the marriage in Connecticut.

Three accounts of Organ and Henri’s meeting are similar with minor differences. From page 55 of City Life Illustrated was this version:


Marjorie frequented New York Cafe Mousquin, the famous gathering place of artists, writers, and musicians, and it was here in 1908 that she first saw Robert Henri. At the coaxing of her friend Walt Kuhn, a cartoonist for the World, she attended some of Henri’s art lectures and was captivated by him. Another friend, Journal artist Rudolph Dirks, finally introduced the two at Mousquin’s in March 1908.


Marjorie met Henri at Mousquin’s on February 3, 1908, after the opening of The Eight exhibition, to which she had been invited by Rudolph Dirks. She had brought along Helen Walsh; it was also the first meeting of Dirks with his future wife. Henri, dining at another table, walked over to greet Dirks and complimented him on the painting he had sent to the Pennsylvania Academy. Immediately attracted to the red-haired, blue-eyed Marjorie, he was even more intrigued when he learned that she was the creator of one of the comic strips he so enjoyed. He suggested she join his class, which she did, teasing him during the initial critique by sketching a caricature of him with enlarged feet. The teacher reciprocated by asking her to pose for a portrait in his studio, and it was there that the romance blossomed.

From page 148 of Robert Henri and His Circle, Homer wrote:


She was often squired about by Walt Kuhn and Rudolph Dirks, cartoonists working on the World and Journal respectively; and at Mouquin’s, one of their favorite haunts, Henri was pointed out to her as the leader of the Eight. At Walt Kuhn’s urging, she attended some of Henri's lectures and was attracted by his slight southern drawl and electric changes of manner. Finally Dirks, himself a friend of Henri’s, introduced them at Mouquin’s late in March. Two days after the meeting Henri began to paint her portrait in sittings that were kept a secret from all but her sister Violet. Indeed, few were aware of their courtship during the spring, so their marriage on May 5 in a civil ceremony at Elizabeth, New Jersey, came as a complete surprise to most of his friends….

On June 7, 1908 the New York Times reported their marriage.


Robert Henri, head of the New York School of Art, it was announced yesterday, was married on May 5 to Miss Marjorie Organ, who was a pupil at the art school. The ceremony was performed in Connecticut, according to Mrs. Henri, the artist’s mother, by a Roman Catholic priest, but the bride’s mother was not present.

Mr. and Mrs. Henri are now on their way to Spain on board the Moltke. Mr. Henri is accustomed to take every year a number of his pupils to Spain, and did not drop this practice because of his marriage. The wedding was announced the day the ship sailed, last Tuesday.

Mr. Henri is a widower, his first wife having died about two years ago. He is 42 years old and is noted in art circles for the originality of his ideas and his refusal to be bound by conventions.

His wife is 21 and has been doing illustrating work for the newspapers. She has been a pupil at the New York Art School for a long time but is said to have met Mr. Henri only three weeks before they were married.

Organ and Henri’s names did not appear in the 1910 census. The reason may have been because they were away in Europe; a passenger list, at Ancestry.com, recorded their return to New York on October 20, 1910.

The 1930 census recorded Organ at the same address where she was a painter. Almost a year after her husband’s death, Organ passed away July 5, 1930. A death notice appeared in the New York Times the following day. The New York Evening Post, July 7, noted her death:

Funeral Being Arranged for Staff Artist of the World

Funeral services are being arranged today for Mrs. Marjorie Organ Henri, for several years an artist on the staff of the World and the Journal, who died of a heart attack in St. Luke’s Hospital in her thirty-fourth [sic] year.

Mrs. Henri was the widow of Robert Henri, the American painter, who died a year ago. Recently she had been painting and doing pen and ink sketches. She lived at 10 Gramercy Square. 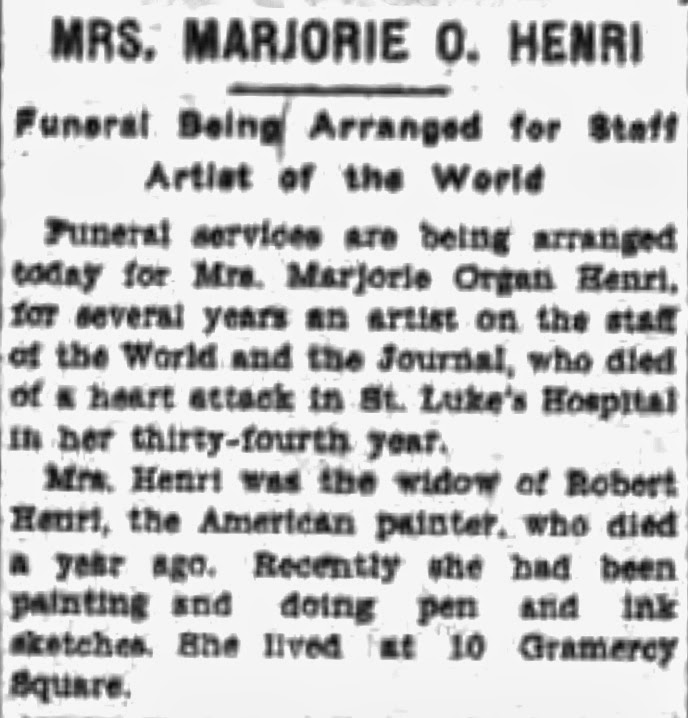 Comments:
Thanks for the Marjorie O.Henri posting. I just finished reading John Loughery's biography of John Sloan and I wanted to learn more about Marjorie Henri.