The Chicago Tribune Comic Book: The Drums of Fu Manchu 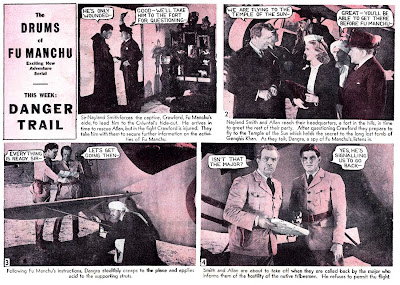 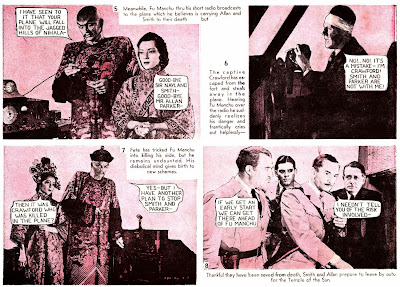 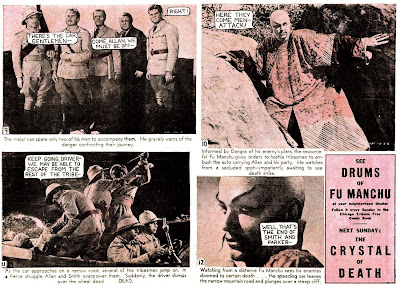 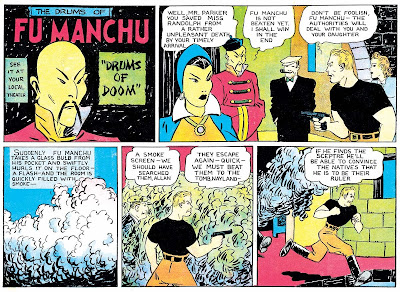 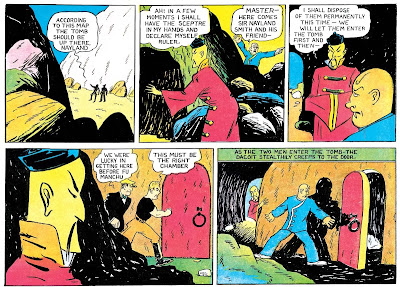 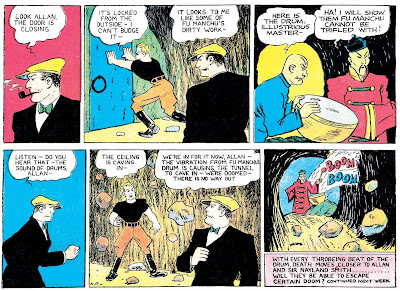 Waaaaaayyy back in the summer, when we were young and life was gay, I published a long series of posts covering the comic strip series that ran in the Chicago Tribune Comic Book. Unfortunately, that blog series was not absolutely complete, as there were two titles for which I did not have the necessary samples to do a proper show and tell.

Luckily for us, Kurt Gore has come along and offered me scans of one of those series, making us 50% closer to our goal. Thanks Kurt!

Each episode was recounted in three pages of the comic book. The stills didn't work all that well because the printing was quite muddy. Although Tribune retouchers worked hard to make the photos reproduce better, often by removing backgrounds and outlining the characters, the results were less than spectacular. This method was finally dropped, and starting on June 2 the feature was drawn, probably by a Tribune bullpenner. The only clue the cartoonist gives us to his identity, beyond his style, are the initials N.P. on each strip. The new strip was much more attractive, but the movie serial only had so many episodes, so the strip had no place to go after adapting the whole run. The last comic book episode ran on June 23 1940.

Those N.P.  initials don't match anyone at the Trib that I can think of. In fact the only American cartoonist of the era with those initials I can come up with is Nick Penn. But I doubt it was him. The style has sort of a generic Tribune look to it. Gus Edson, Stanley Link, Al Posen, Carl Ed ... any of those Tribune guys could, I think, have whipped off this sort of thing. In fact, the second panel looks like a Caniff swipe. Hey, could it be? Nah. Caniff couldn't draw this mediocre on a bet.


Oh, by the way. If you'd like to see a good helping of the movie serial, head on over to The Serial Squadron, where they offer a half-hour video clip from the serial, and have a fully restored DVD available for sale when you just can't survive without knowing what happens next.

P.S. Before you expend a lot of brain juice trying to figure out the secret identity of N.P., I have to tell you that our resident super-sleuth, Alex Jay, has come up with nearly incontrovertible proof of the artist's identity. I have to say, when he revealed it to me, I was rather pleased. But that's all I'm going to say -- you can wait for Jay's Ink-Slinger Profile tomorrow to learn ... the rest of the story. Good day!

Comments:
Could be anyone, as you say. Maybe even Ray Bailey? I still have tohave a look to see if the 'standing rock' formation that Bailey drew in 30% of his strips was something he took from Caniff or something he added to it... but there is one in the June 2 strip as well.