Charles D. Pearson was born in Brooklyn, New York, on May 21, 1913, according to his New York World War II enlistment record. The 1915 New York State Census recorded Pearson, his parents, Milton and Emily, and older brother, Homer, in Brooklyn at 48 Richmond Street. Pearson would reside there long enough to be found in the 1940 U.S. Federal Census. His father was a traveling salesman. The census records at Ancestry.com link his mother to an “Emilie Dahl” in the 1900 census. Pearson’s middle name may have been his mother’s maiden name. 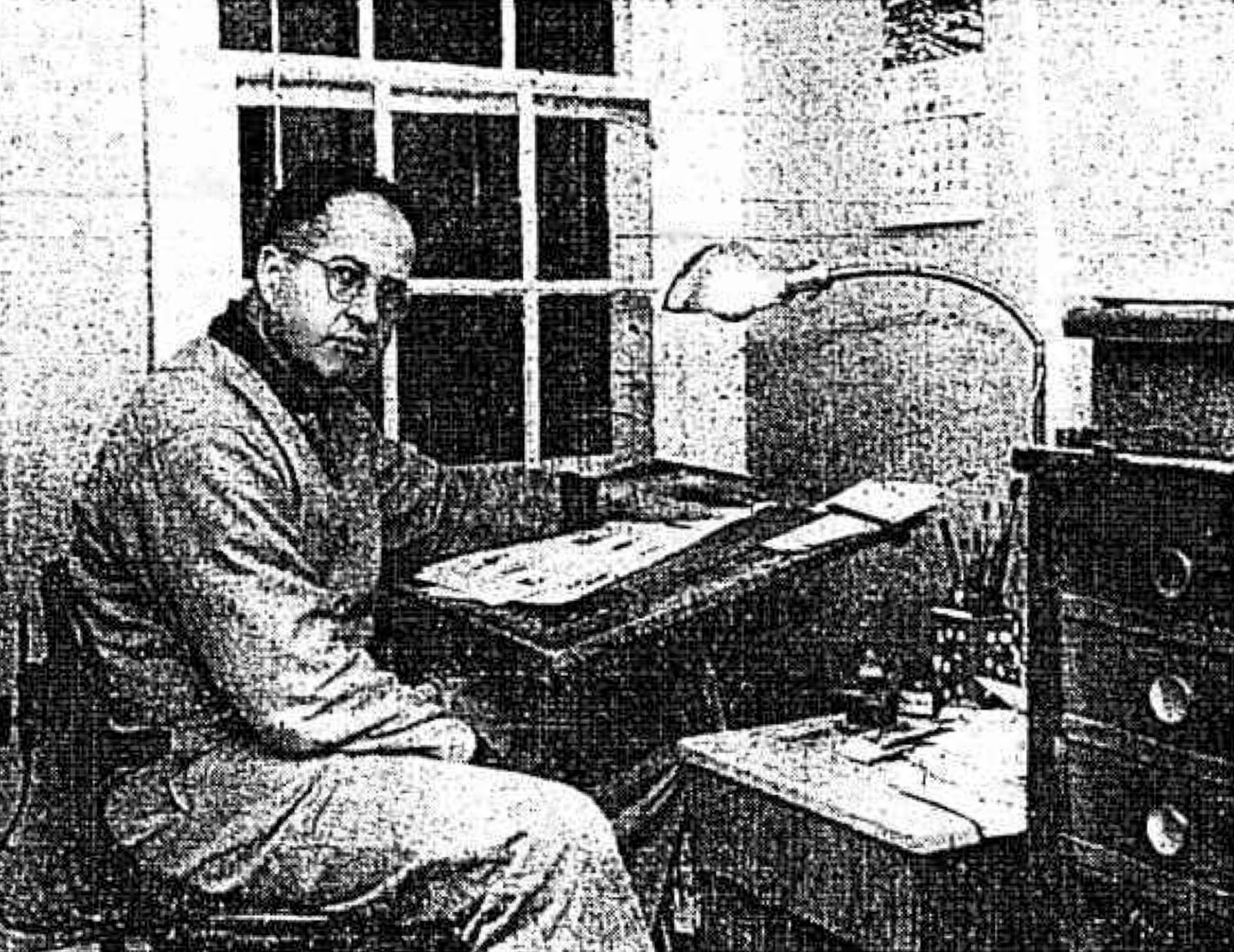 …Mr. Pearson was born in Brooklyn about 40 years ago and went to Jamaica High School where he started cartooning. After four years at Grand Central School of Art he began freelancing and made his first sale to the old Life magazine when that publication was devoted to cartoons instead of the news organ it has become since purchased by Time, Inc.

Later sales were made to Saturday Evening Post, Colliers, Ladies Home Journal, and American Legion Magazine among others. In between, there were 36 months in the South Pacific with the Army where he also cartooned and did editorial work for Yank. It was also at this time that he broke his bread and butter arm and was idled from the drawing board for a time.

The Courier did not mention Pearson’s cartoons that were featured in Life magazine, January 8, 1945. Another one by him was included in a group with other cartoonists in Life, November 24, 1946. Pearson’s third appearance in Life was in the letters column of the August 26, 1957 issue. (He was credited on page two.)


…After the war Mr. Pearson picked up where he left off, and soon conceived his idea for “Notes.” He wrote directly to the then Herald-Tribune publisher Whitelaw Reid, submitting a few sample panels. His idea was approved by Mr. Reid and he has been with the Tribune Syndicate ever since…

…Editorial page cartoons have long been an important feature of many of the nation’s newspapers and the above have been included among the hundreds turned out in the last few years by Charles Pearson, who now makes his home on a small farm in the Town of Greenport.

Once weekly Mr. Pearson turns out six small panels entitled “Notes on the News”, devoted to some segment of that week’s happenings and these, in turn, are distributed by the New York Herald Tribune Syndicate to 60 publications including the Oakland Tribune, San Diego Times-Union, New Orleans Times-Picayune, and other large metropolitan dailies throughout the nation.

“The cartoons themselves are simple, once I get the idea under way,” Mr. Pearson says, “but the toughest part is writing the caption lines for them. I do all my own captions.” Ideas for cartoons come for the most part from reading the news and retaining what is big enough and important enough that everyone will know about It two weeks or so hence when they see the cartoon on that particular subject. For instance, the recent Sputnik flurry which in turn helped create the panel of the “beeping” Russian.

One corner room in the upstairs of his farm home is Mr. Pearson’s studio where he has a drawing desk next to a window that furnishes a view of the Greenport countryside as he contemplates his next cartoon. Within easy reach of the southpaw artist are an assortment of pencils, brushes, inks, paper, and a few newspapers for research.

As he formulates an idea for a cartoon or caption, it is jotted op a piece of paper and placed under a large clip oh his drawing board. By the end of a week there may be 25 to 30 ideas for panels from which he eventually chooses the six best sounding ones and sets to work. “It takes a week to get things in order,” Mr. Pearson, told us, and I wait right until the last minute so I can be up to date on the news. Then I draw all six at one time, devoting the entire day to my work.”

…Last March Mr. Pearson moved from Westbury, L. I., to his present Greenport farm. Mrs. Pearson, originally from Sherman, Texas, is a graduate of Texas State College for Women at Denton, and was a reporter-photographer, for the Marshall News Messenger. She later came to New York City as a fashion photographer and there met her future husband. Their three budding cartoonists, all boys, attend Claverack Union Free School.

As for outside freelance work, “that’s out right now,” Mr. Pearson said. “I have plenty to do right here getting the farm in shape. There are still a few repairs and odds and ends to be completed, and that leaves very little outside time. And my six panels keep me busy the rest of the time. And then there's always those captions.”

Sometimes Pearson’s jokes were printed without the cartoon as in the New York Post, September 7, 1946: “New approach to an old gag, by cartoonist Charles Pearson: Teacher to student—‘Your homework is 100 per cent right today. Are you sure your father did it all by himself?’ ”

Pearson’s piece about himself was printed in Best Cartoons of the Year 1947.

I was born 400 years ago in a life boat aboard the Mayflower. I’ve been drawing cartoons ever since. My first cartoons were drawn for a select group of subscribers. Each morning a cartoon was painted on the side of an educated elephant. During the day the elephant walked a route which took him past the home of each subscriber. He stopped in front of each one for three minutes. The elephant disappeared during a meat shortage. I suspected dirty work on the part of a diner that started to advertise ‘Jumbo Hamburgers’. Unfortunately I could never prove anything. Recently I was in Uncle Sam’s Marching and Chowder Club and right now I’m drawing left handed cartoons for magazines until such time as I invent the Elikafoobis. The Elikafoobis will revolutionize conditions here on the Universe. Wait and see.

What’s Funny About That? Cartoons from This Week (1954) had another story by Pearson:


“I was born in Brooklyn at least forty years ago. My family had already decided my brother would be President of the United States, so that left me unemployed. This annoyed me, so I decided to write nasty things about people on a fence but I didn’t yet know how to write so I drew pictures instead.”

Mr. Pearson’s brother is still not President, though he hopes to make it in 1956. Meanwhile Cartoonist Pearson is keeping his tuxedo pressed for the inaugural dinner, and he and his wife have raised three future presidents of their own. They all live in Carle Place, New York, wherever that is!


The editor of the Look humor department, Gurney Williams, has had on display a mousetrap invented by Charles Pearson, a cartoonist of Hudson, New York. It is a large tin can, the open end of which is covered with wire mesh. Bolted partway inside the can is a conventional mousetrap with its lethal snapper securely wired upright to the mesh.

It is physically impossible for any mouse to enter this trap, and even more impossible that the immobilized snapper could pose any threat to man or beast….

Sometime in the 1960s, Pearson was a cartoonist for the Albany, New York newspaper, the Knickerbocker News. The original art for a few of his cartoons are here and here.

A 1974 issue of The Conservationist had a brief explanation on how Pearson was involved illustrating an article:


...Work on our cover story (Heroes of the Christmas Bird Count) began in November 1973 when Samuel Yeaton of Bayside, a veteran of many Audubon bird censuses, agreed to write the story of the then upcoming bird-count. His article arrived in our office January 1974. Early in summer Charles D. Pearson of Hudson read the article and consented to prepare illustrations for it including a cover. The resulting combination of pictures and text is, we think, a most happy one.

…Mr. Pearson is widely known for his cartoons in the Knickerbocker News, which he draws with his left hand. He is also, he says, a left-handed farmer in Columbia County, where he serves on the Soil and Water Conservation Board. “I try to stir people up so they will be as enthusiastic about a countywide soil survey as I am,” he writes. “Actually I am not much of a birdwatcher. I’m more a bird talker-toer. I can warm up to those birds who will sit on a fencepost and say tweedletweedle at the proper times.”

According to the Social Security Death Index, Pearson passed away March 16, 1991, in New York.