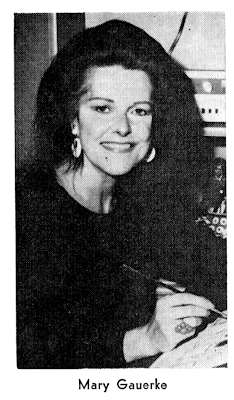 by Don Maley, Editor & Publisher August 9 1969
When Mary Gauerke (nee Flanigan) was a wee lass, her father, Lon, got himself enmeshed in the sauerkraut business in Geneva, New York. Young Mary grew up never realizing there was anything funny about her father being the Irish Sauerkraut King. "But when he appeared on 'What's My Line?' years later," she now admits, "I finally thought it was funny."

But for years she's been seeing humor in other situations. Despite life's apparent grimness Mary Gauerke thinks that life can be beautifully funny — and since 1947 has been putting humor on paper with a fine brush dipped into black India ink. The petite housewife is a rarity — a female in an almost exclusively male profession: cartooning.

"I didn't know that cartooning was a man's world," she admits, "when I first started doing it soon after getting married in '47." Since then she has sold cartoons to Look, The New Yorker, Playboy, National Review, True, Family Circle and a variety of newspapers, including The New York Times, the Chicago Tribune, the Wall Street Journal and The National Observer.

After more than two decades of depicting life's humor for magazines Mary created a six-a-week panel cartoon called "The Alumnae," which is being distributed by The Register and Tribune Syndicate. The well-drawn and completely contemporary panel pokes fun at distaffers. "The theme of the panel," explains Mary, "revolves around the diverse activities of four women with contrasting personalities. DeEtte, the youngest, is a caricature of youthful, frivolous femininity who lives only to be dressed up. The avant-garde Magda keeps her ear to the ground for current fads in the arts, politics, and social problems. She is feverishly determined to stamp out middle-class values, which, in turn, are feverishly determined to stamp out Magda. Helen is a calico-kitchen housewife forever engaged in a losing—sometimes gaining—battle with a self-indulgent appetite. And Myra is the organizer and leader of the group—a somewhat officious club-woman always seeking outlets for her frustrated executives urges." The girls' husbands were originally drawn into the panels but were later excluded.

Mary says the flavor of her creation is contemporary. "The characters are not paper dolls," she says, "but are rather designed to suggest their real-life counterparts, especially to women readers, particularly those in the younger age groups." 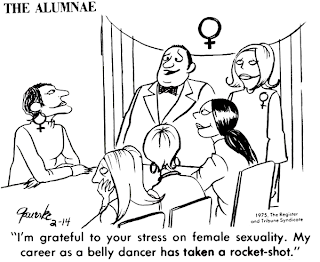 Before signing with the Register and Tribune Syndicate Mary was turned down by two other major syndicates. "We saw a great potential in it," says Denny Allen, the syndicate's managing editor. "We felt it was well done and that it filled a void. Many affluent and educated people have moved to the suburbs and we find there isn't too much in the paper today for the typical suburban housewife. She's no dummy and deserves more than she's getting. We feel 'The Alumnae' should appeal to her." Allen, who was instrumental in signing the feature, feels it's "sophisticated and intelligently constructed." "Mary uses empathy in 'The Alumnae,'" he says, "and the whole thing is tied into our times. The art is fresh and the humor is thought-provoking." To date over 30 newspapers feel the same way and have signed the panel. 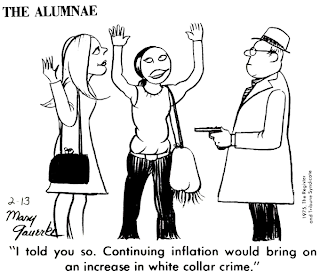 Mary says her humor is universal and her panels are checked by the syndicate before being distributed. "If I can understand them anybody can," says Allen. But before the cartoons are sent to the syndicate Mary's husband, Carl, checks them. "He's deaf, dumb and blind to all art," she says, "but he's got good taste when it comes to my cartoons. I show him a batch of my latest ones and he picks the ones he thinks are best." Husband Carl is with the Mergenthaler Linotype Company where he is manager of their overseas sales division. "He's happy because I've signed with the syndicate," confesses Mary. "Now that I'm working he can retire and play with his weather machines." (Carl is a frustrated weatherman and has a gaggle of weather-checking instruments in the Gauerke's Tenafly, New Jersey home.)

Ideas for "The Alumnae" come from inside Mary's head. "They're exclusively mine," she says. She skims through most magazines and newspapers to see what's new in the world and draws "three or four months ahead." Taboo subjects are strictly taboo in her panels, although they are slowly meeting with approval elsewhere in the media. "If she draws a panel involving the Pill," says Allen, "someone is bound to complain to a newspaper editor somewhere. And if readers complain then the whole thing is ruined and we defeat our own purpose." 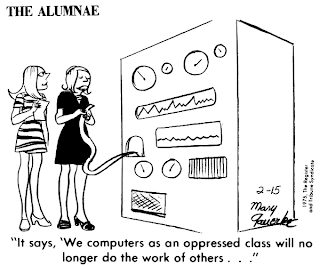 Dreaming up situations for her four girls to get into takes up most of her time. "I'm only a part-time housewife now," she admits, "and I work whenever I have a chance to get to my drawing board." Her studio is the biggest room in her three bedroom home. Besides her family and her cartooning she has another passion. "I'm a puzzle buff," says Mary, who is so proficient at crossword puzzles that she's one of the few people able to complete The New York Times crossword puzzle— a feat accomplished only by English professors. "It's really an addiction, one that's worse even than booze or heroin," she complains. Another complaint: "When you live in the New York area there are very few comics available now that most of the papers are gone."

Before getting married Mary studied art at Stevens College in Columbia, Missouri, and her son, Carl Jr., shows inherited artistic talent. "He'd be a good cartoonist," says his mother, "but he just can't sit still long enough to draw." Carl Jr., 20, is a sophomore at the University of South Carolina and brings his college chums home on weekends. "He just brought up a whole bunch of hippies," says Mary, "and I think some of them are planning to stay for the summer."

Comments:
Do I smell burning brassiere? Honestly, this chick has one of the scariest-looking styles of the seventies. Oh, those faces....