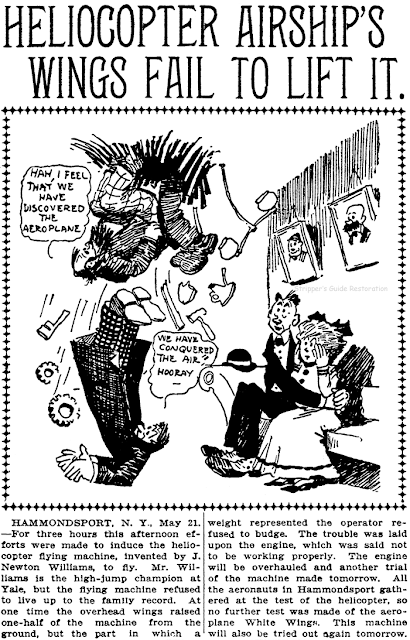 Friday, May 22 1908 -- A really practical helicopter wouldn't be invented until the 1930s, but some inventors were on the hunt for it long before. One of the mostly unsung pioneers was J. Newton Williams, who was reported to have successfully flown his helicopter (barely) in July 1909 in the New York Times. Why he didn't pursue his design further I don't know, but he seems not to have rated so much as a footnote in most web-based histories of helicopters.

Herriman here provides a cartoon regarding an unsuccessful flight attempt from a year earlier. Since no photo was included in the wire story, Herriman slyly structures his cartoon so that he doesn't have to depict this mysterious invention called a 'heliocopter'.

Comments:
"Heliocopter" in the headline and first sentence, but streamlined to "helicopter" by the end of the story. Spelling in error, or in flux at that time?