John George “Jack” Betts was born in New York in 1904, according to a family tree at Ancestry.com. His parents were Steven H. M. Betts, a machinist, and Alice Ethel Stevens, who married October 1, 1901, in Jersey City, New Jersey. Betts’s father was born in Brooklyn, New York, which was his residence in the 1900 U.S. Federal Census. Betts’s sister, Ethel (1907–1982), was three years younger and born in Brooklyn. Presumably, Betts was also born in Brooklyn.

In the 1910 census, Betts and his sister were living with their maternal grandparents, John and Anne Stevens, whose two sons, daughter and daughter-in-law were part of the household. They resided in Jersey City, New Jersey, at 257 Union Street. The family tree said Betts’s mother had passed away February 9, 1910 in Brooklyn, New York, about two months before the census enumeration (April 15). Betts was six years old at the time. His father has not been found in this census; he passed away in 1970.

Betts’s education and art training was in Jersey City. He was a Boy Scout who contributed spot illustrations to the Jersey Journal’s “Scouting” column. His debut was March 26, 1918.

I want you to meet our new artist. He’s Tenderfoot Scout Jack Betts of Troop 17, and he’s the Art Editor of this department of the Jersey Journal. You’ll meet him here every Tuesday.

It’s only natural that you’d want to get a view of the Scout who drew the three pictures that appear to-day. So I said: “Jack, old man, just draw a picture of yourself making your bow to the audience.”

And this is what Jack drew: 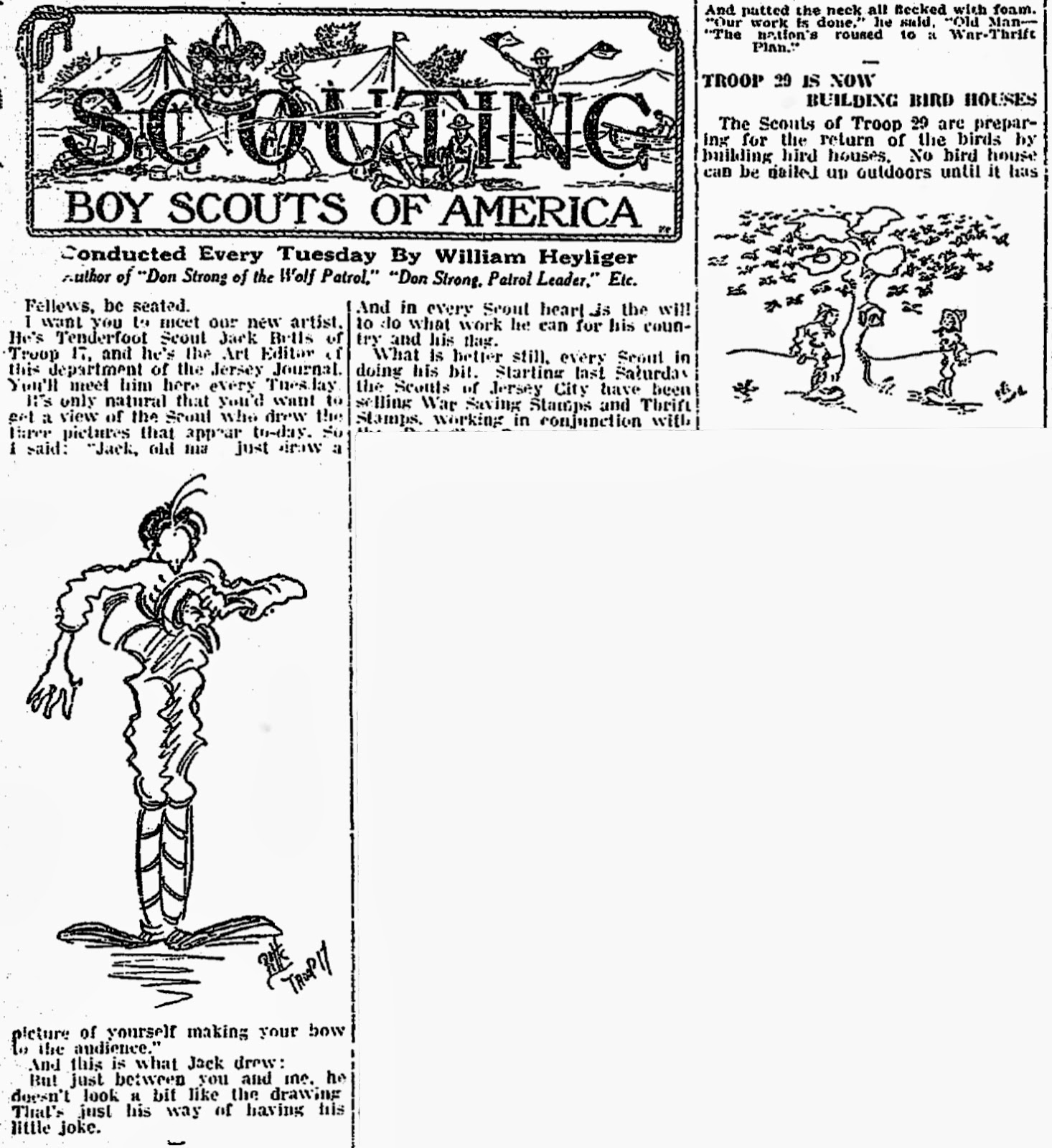 But just between you and me, he doesn’t look a bit like the drawing. That’s just his way of having his little joke.

We—that is, Jack Betts, the art editor, and I—sat down yesterday to plan this week’s Scouting news.

“Well,” said Jack, “last week you had a little fun with the showing them how I don’t look; now it’s my turn.”

“What do you mean?” I asked, growing pale.

“I mean,” Jack said in determination, “that this week we’ll let them see how you look.”

“But listen, Jack, old man—we can’t do anything like that.”

“We’re going to” said Jack, and he reached for his pencil.

And this was Jack’s idea of mercy: 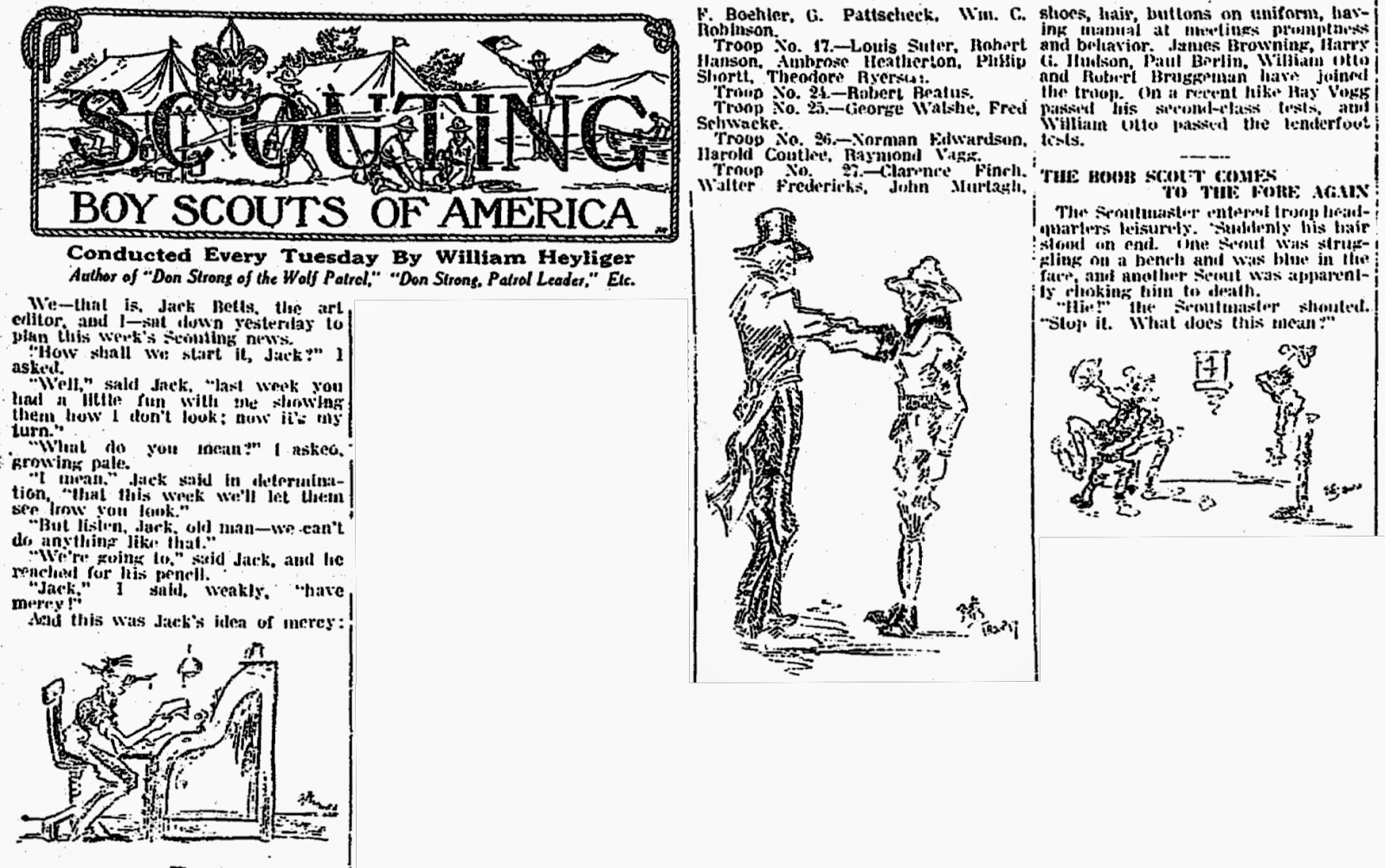 The spot illustration, below, was published in the April 30, 1918 column. 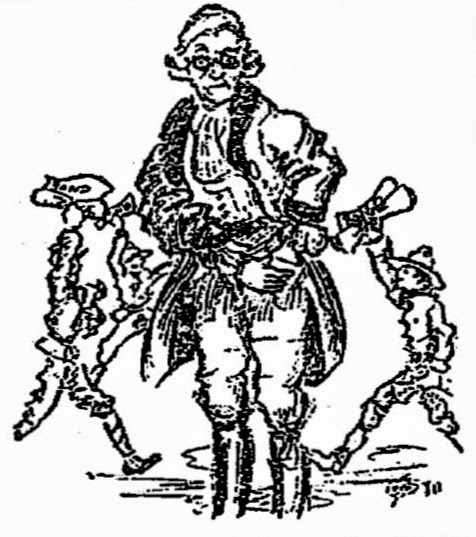 Farmer and the Scout: Scout and the Bug

“What do you think of it, Jack?” I asked Jack Betts, our trusty cartoonist.

“Can you draw a picture of a battle between a cut worm and a Scout?’

Jack said he could. He did. Here it is: 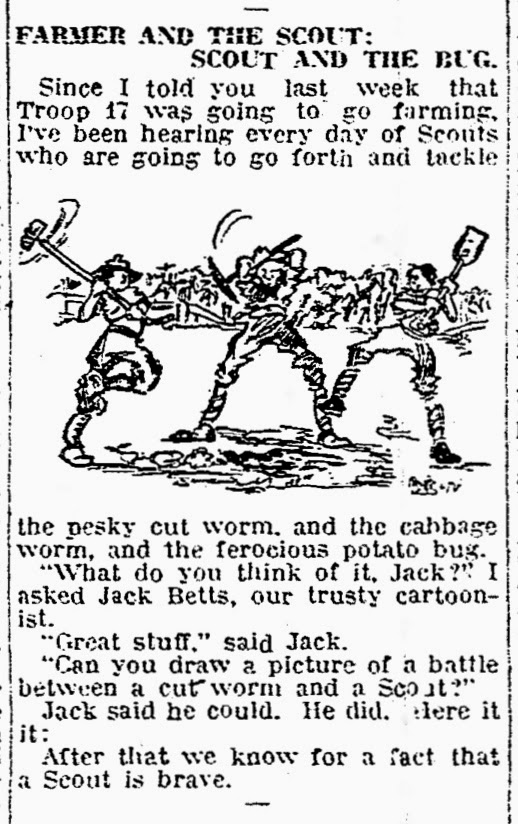 After that we know for a fact that a Scout is brave.

One of Betts’s drawings earned him a mention in the national periodical, St. Nicholas, February 1919.

In the 1920 census, Betts’s maternal grandmother was the head of the household which included two of her children and her two grandchildren. They lived in Jersey City at 219 I (eye) Avenue. Betts was 15 years old when the enumeration was done on January 15; based on the enumeration dates of the 1910 and 1920 censuses, his birth day was after January 15 and before April 15. The census recorded his name as John.

At this time, very little is known about Betts in the 1920s. He married around 1925 and was credited for an illustration in the October 1928 issue of College Life.

According to the 1930 census, Betts was married to “Ester”, a Swedish emigrant, and had two children, Joan, age four-and-a-half, and Jack, age one. They resided in Jersey City at 37 Clendenny Avenue. His occupation was artist at an advertising agency.

In October 1936, the American Distilling Company launched a major advertising campaign to promote its Old American Brand whiskey. Betts illustrated the two-panel advertisements which featured “Prof. Jim Crack”. The advertising agency Hanff-Metzger created the campaign, which was copyrighted and recorded in the Catalog of Copyright Entries, Part 4, Works of Art, etc., 1936 New Series, Volume 31, Number 3, on pages 135 and 139. 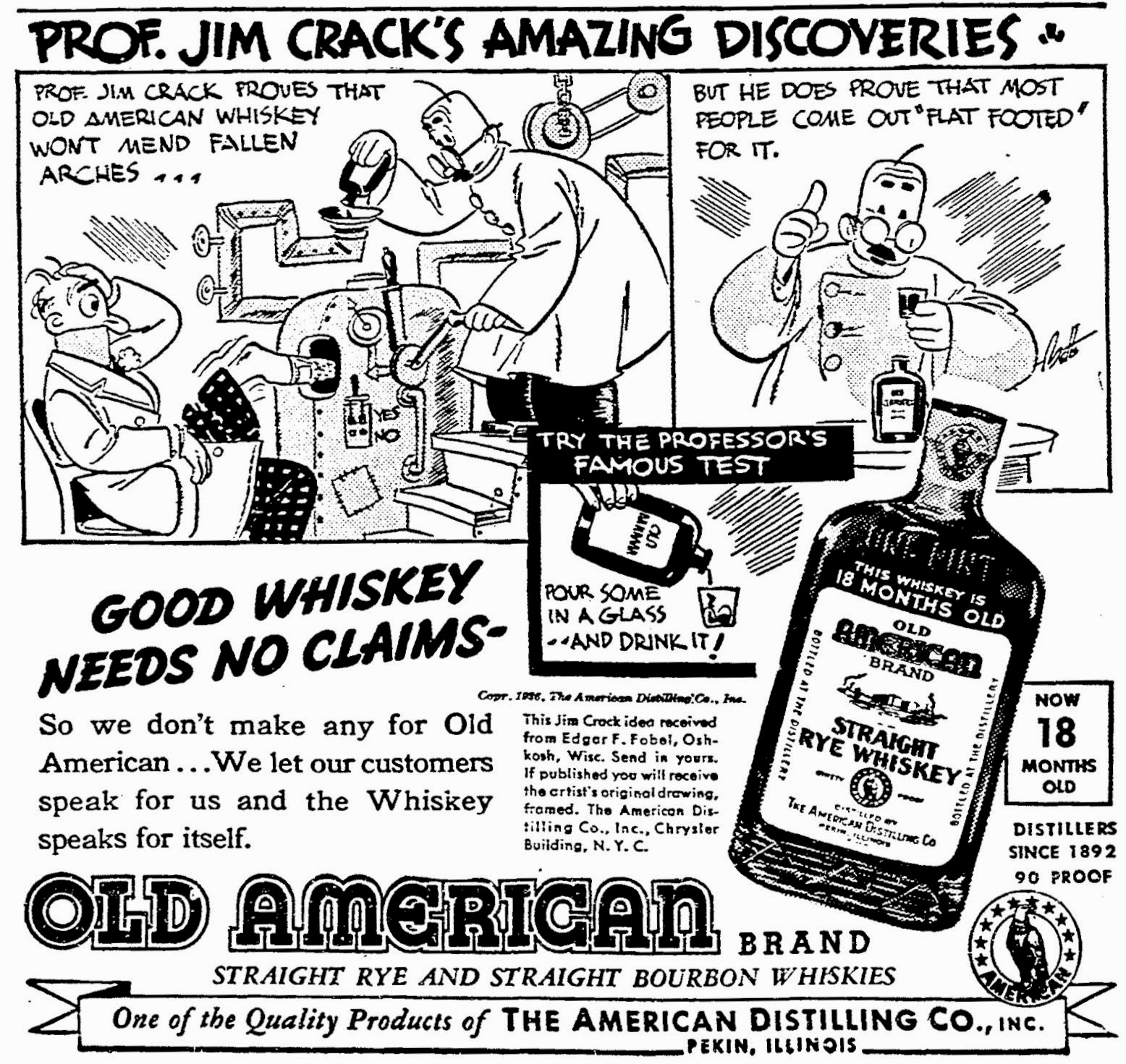 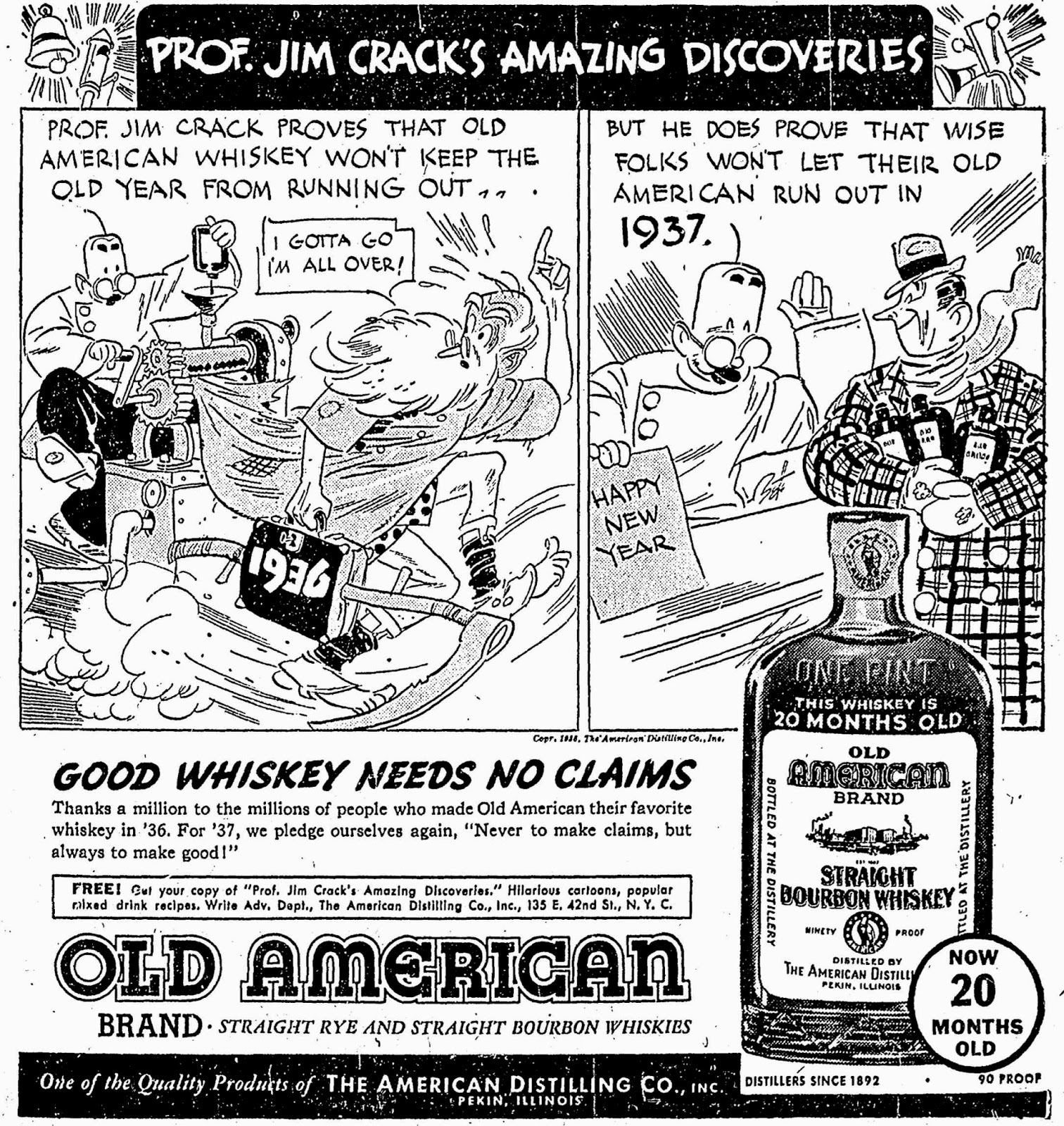 The New York Times, April 29, 1939, noted that Betts leased an apartment at 2 Horatio Street, and that was his address in the 1940 census. This was the first time his name was recorded in the census records as Jack. His occupation was freelance artist and he had completed three years of high school. His second wife’s name was listed as “Trixe”. Betts’s first wife and children lived in Miami, Florida.

The 1940s was a busy decade for Betts. He produced advertising comics for Ben Gay, Nestlé, and Super Suds.

A World War II military service record for Betts has not been found. He illustrated the poster Don’t Fall for Enemy Propaganda which can be viewed here and here.

Betts was one of the artists who illustrated the adaptations of Book-of-the-Month Club novels that appeared in newspapers. In 1946 he drew the panels for Britannia Mews.

Betts drew spot illustrations for several magazines including American Legion, Collier’s Magazine’s “Keep Up with the World” column, This Week Magazine, and Bluebook.

According to the family tree, Betts passed away in 1966. An obituary has not been found and there is no record of him in the Social Security Death Index.

A photograph of Betts and a greeting card by him can be viewed at Fabulous Fifties.

Comments:
Nice... lot's of stuff I didn't have. Betts daughter told me he died in the late fifties. This does coincide with the disappearance of his work around that time. But it doesn't fit with the fact that neither Tom Schreuer nor Leonard Starr knew about him, although all of them worked at Johnstone and Cushing in the late fifties. I'll contact Alex privately about all of this.

I have found a Jack Betts dying on March 8 1957 at age 53 in New York. Could be our man. Fits with what the duaghter told me. https://health.data.ny.gov/Health/Genealogical-Research-Death-Index-Beginning-1957/vafa-pf2s/data. So where do I go from there to more?

Oh, sorry. It's the third of August 1957.I now have the State file number and would like to see the death certificate. Can that be found?

Here is the link to the New York State Genealogy Records & Resources. https://www.health.ny.gov/vital_records/genealogy.htm

If Betts was born outside of New York City, you should be able to obtain a death certificate.

If Betts was born in New York City, you should read the genealogy information at the New York City Department of Records:

Here is the link, http://www.nyc.gov/html/records/html/archives/genealogy.shtml