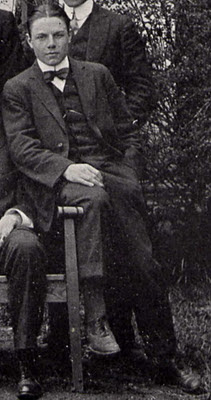 Jacob Bates “Jack” Abbott was born in Brookline, Massachusetts on November 11, 1895, according to his World War II draft card and the Vermont Death Record at Ancestry.com. In the 1900 U.S. Federal Census, he was the only child of Edward and Mabel. They lived in Brookline at 29 Marion Street. His father was a real estate agent.


He has not been found in the 1910 census. A yearbook at Ancestry.com identified his high school. He attended St. George's High School in Middletown, Rhode Island. He was in the class of 1913 and contributed to the June 1912 yearbook, The Lance, as an art editor. He was a member of the Dragon Board, 1911–1912 (see photo); an errand boy for the Dramatic Association; and won a prize in drawing. He signed his World War I draft card in 1917. His occupation was security salesman (bonds). His description was medium height and build, with blue eyes and dark brown hair. According to a Pennsylvania Veterans Burial Card at Ancesrty.com, he served in the army from August 15, 1917 to January 18, 1919. He was a second lieutenant in the 28th Division, Company D, 112th Infantry Regiment. He fought on the Western Front.

In 1920, he and his wife, Eleanor, lived with her parents in Philadelphia, Pennsylvania at 1015 Oak Lane Avenue. He was unemployed. In 1929 he moved his family to California where he sold the strip, The Gay Stone Age, to Hearst.

In the 1930 census, he was recorded in Pasadena, California at 2377 Mar Vista Avenue. He was a cartoonist with two children.

Tredyffrin, Pennsylvania, on Contention Lane, was his home in the 1940 census. He was an advertising illustrator. According to the census he resided in Cambridge, Massachusetts in 1935. His World War II draft card was signed on April 12, 1942. He lived in Dublin, New Hampshire, where he was self-employed. The Daily News (Huntingdon, Pennsylvania), August 24, 1944, reported his appointment.

Harrisburg, Aug. 24.—Jacob Bates Abbott, Haverford, nationally known wildlife illustrator and naturalist, was appointed today by the State Game Commission to assist in promoting its education program which will be intensified for the first time since its inception 10 years ago.

Abbott, a Harvard graduate and World War I veteran, will be paid on a per diem basis comparable to the amount the commission expends annually for art work.

The commission is planning to expand its program after the war to better acquaint hunters and the general public on wildlife conditions, hunting and trapping regulations, an agency spokesman said.

Abbott will begin work in the near future on a series of painting[s] of all Pennsylvania game birds and animals which will be used in game and wildlife publications.

Abbott passed away July 14, 1950, in Brattleboro, Vermont, according to the Associated Press report. Pennsylvania Game News, in an issue from Volume 21, 1950, gave an account of his life in this excerpt:


Jacob Bates Abbott, Haverford, for years a Commission staff artist, died from a heart attack on July 14 while he was vacationing in New Hampshire. He was 54. One of America's foremost wildlife artists, Mr. Abbott was a regular contributor of both illustrations and articles on natural history to this magazine. His colorful portraits of wild birds and animals in their native habitat were featured on Game News front covers from 1941 to 1949.

A native of Brookline, Massachusetts, Abbott attended Harvard College but left at the end of his junior year in 1917 to enlist in the Army. He served in France during World War I as a machine gun officer with the 28th Division and was gassed at Chateau Thierry. Following his discharge he became a bond salesman, doing book jackets and illustrations on the side.

In 1929 he moved his family to California and that year sold a comic strip called “The Gay Stone Age” to William Randolph Hearst. He later contracted to present Zane Grey’s books in comic strip form. In 1934 he became a free-lance artist and concentrated entirely on wildlife illustrations. He sold his first cover painting to the Saturday Evening Post in 1935 and during the past 10 years he has illustrated about 35 books including the “Encyclopedia of American Birds” and “Animal Babies”. One of his paintings was requested by the Library of Congress for its collection of outstanding wildlife illustrations….