Camillus Kessler was born in Ottawa, Kansas, on March 3, 1883, according to his World War I and II draft cards. In the 1895 Kansas State Census, he was the youngest of two children born to John and Minnie. Their home was in Ottawa.


One local boy who “made good,” did so as a nationally syndicated cartoonist, but has been almost completely forgotten by Ottawans and the public at-large….

Kessler grew up in Ottawa in the 1880s and ’90s and attended the public schools here. His father, John B. Kessler, and a partner had purchased the Queen City Herald newspaper here in 1883, about the time of Camillus’ birth….

The family originally lived on Poplar Street, but later resided at 132 and 217 S. Cedar. They apparently moved away from Ottawa about 1900...

Details of Camillus Kessler’s cartooning career are even more obscure. His talents presented themselves at an early age, however, for when he was still in his teens he drew a series of excellent caricatures of prominent local businessmen….

The 1900 U.S. Federal Census recorded Kessler, his parents and sister in Muskogee, Creek Nation, Indian Territory, on Third Street. They resided in what would become Oklahoma state in 1907. His father was the proprietor of a printing office. The Evening Tribune (San Diego, CA), October 26, 1933 carried L.L. Stevenson’s column, “Lights of New York”, who said:


Camillus Kessler was telling me about the old days down in Oklahoma when his father ran the daily newspaper and he delivered it on ponyback. In those days, newspapers being hand set, there was always a demand for printers. So the elder Kessler would telegraph up and down the Katy railroad to have tramp printers headed this way. Most of them would work a week and get drunk on pay day. Muskogee didn’t have much of a caboose. But it was strong enough to hold the tramp printers. So every Monday morning, Editor Kessler would go to the coop and pay the fine of $2, so he could get out his paper, the fine, of course, being deducted from the next week’s wages.

How long they stayed in Muskogee is not known.

The St. Louis Republic (Missouri), August 21, 1904, said Kessler and other newspapermen were on a committee, for a competition sponsored by a local music store, to award pianos to girls. The paper said of Kessler: “…whose cartoons and drawings in The Republic have won for him more than a local reputation….” The Muskogee Times-Democrat (Indian Territory), October 6, 1905, noted Kessler’s whereabouts: “Camillus Kessler, the cartoonist, formerly of this city, is now at Parsons, Kansas, running a series of cartoons in a paper there.”

Gould’s 1908 Directory, St Louis, Missouri, listed Kessler at 4273 St. Louis Avenue and his occupation as artist with the Republic. The 1910 directory said he was a St. Louis Star cartoonist and resided at 4254 St. Louis Avenue. The same address was recorded in the 1910 census which said he was married to Edith.

The St. Louis Lumberman, January 15, 1910, published three drawings by Kessler, including one of his father (middle column). 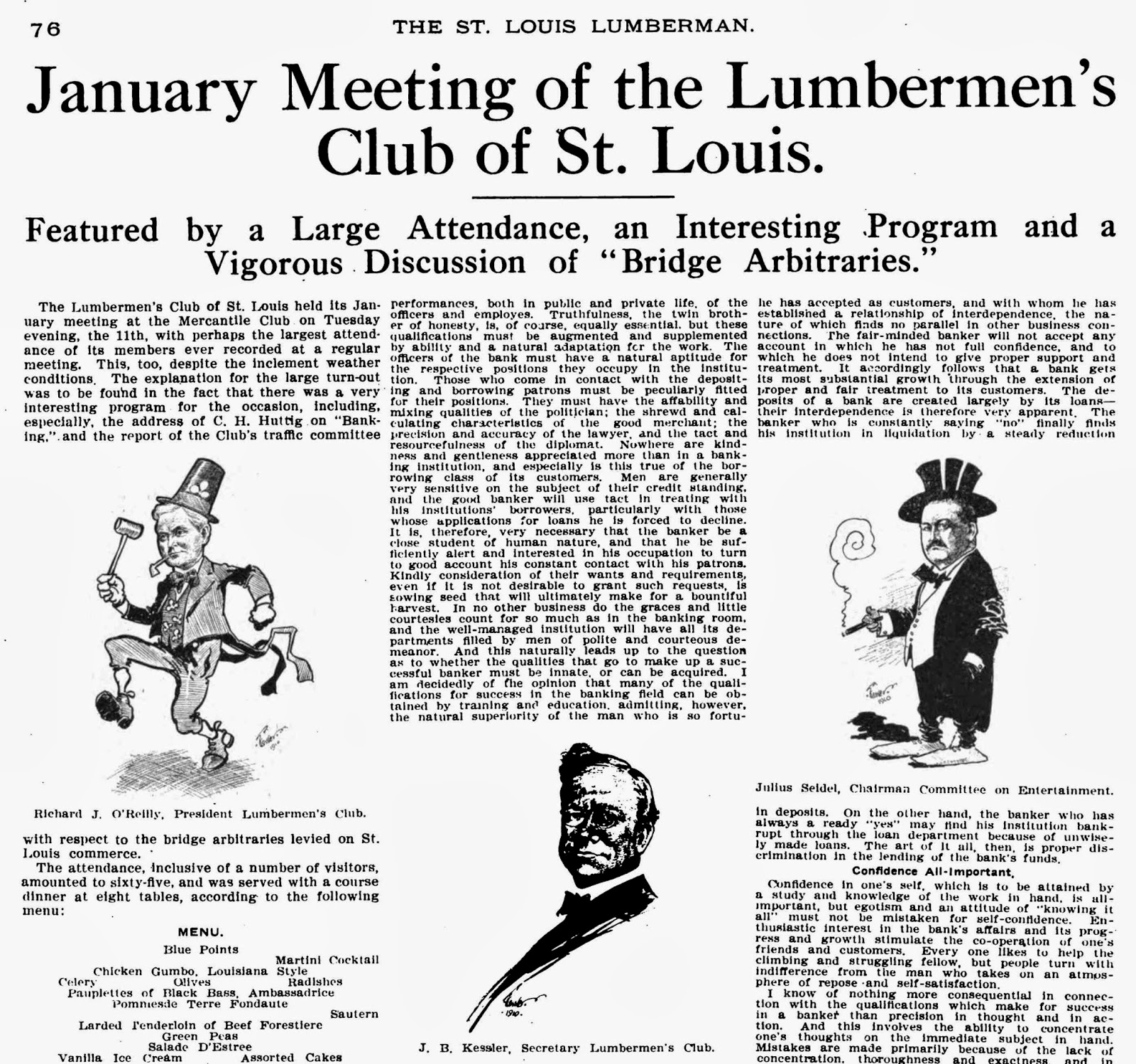 A full-page feature, “Back of the Footlights by C. Kessler”, appeared in Cartoons Magazine, March 1913. At some point, Kessler moved to New York City. According to American Newspaper Comics (2012), His cartoons appeared in the New York Press from January to June 1914.

The 1915 New York State Census listed cartoonist Kessler and Edith in Manhattan at 839–841 West 179th Street. The same address appeared on his World War I draft card. The description of him was medium height and build with gray eyes and brown hair. The self-employed newspaper artist signed his draft card on September 11, 1918.

Regarding Prohibition, Kessler wrote a letter to Leslie’s Weekly which was reprinted in The Mixer & Server, February 15, 1916.

In the 1920 census, the couple lived at 76 West 103 Street in Manhattan. Kessler’s work took him various events such as the fifth annual banquet of the Silk Travelers’ Association at the Hotel Astor. The American Silk Journal, March 1920, described what he did:


Cartoonist C. Kessler, who made most of the cartoons in the souvenir program, sat at a small table in the center of the room, and as he drew cartoons they were projected on a screen suspended from the upper balcony. These cartoons were of persons present in the audience and created considerable laughter.

Kessler went unnamed in the Garment Manufacturers’ Index, March 1920, article about the same event: “…A feature of the entertainment was the presence of a shadow cartoonist who amused the company with sketches of the leading men in the association.”

Kessler illustrated two full-page articles by Arthur James Pegler which were published in the New York Tribune, August 7, 1921 and October 23, 1921. One of his At the Bottom of the Ladder cartoons, for the New York Globe, was reprinted in Publishers Weekly, September 16, 1922. A 1926 issue of The Bookman noted the upcoming release of the book, At the Bottom of the Ladder, and offered an explanation on how the series started.


“At the Bottom of the Ladder”, a series of Kessler cartoons, was recently syndicated and is to be published now in book form. The origin of the series seems to have been as follows:

“My friends have seen with interest and amusement the cartoon by Kessler exhibited in a recent issue of the ‘Globe’ entitled ‘At the Bottom of the Ladder’…He probably did not know that the cartoon accurately represents my early experiences on my father's farm. On two different occasions my carelessness, and perhaps unreasonable haste, resulted in injuries — not serious but quite disagreeable. At one time the ax slipped and struck my foot, resulting in a scar which I have carried to the present day. At another time a stick flew and, instead of striking a cow, struck me across the bridge of the nose and left a mark which lasted several days, although the wound healed without leaving a permanent scar. I am wondering if I could purchase the original drawing.”

The cartoon in question shows young Gary busily engaged with an ax, making wood fly, as well as several farm animal, while a too inquisitive cow has been caught squarely between the eyes by a flying billet.

The 1930 census found newspaper cartoonist Kessler in Palisades Park, New Jersey at 206 Harnet Avenue, where his home was valued at $10,000. In this decade, Kessler produced the weekly panel, Making the Grade (1930 to 1932), and the daily panel, Home Town Echoes (1939 to 1950) which had alternate titles such as On the Home Front, Seems Like Yesterday, and True to Nature. The Ottawa Herald said: “Kessler’s nationally syndicated “Seems Like Yesterday,” and “Home Town Echoes” cartoons were often based on his early days in Ottawa.” Kessler’s cartooning career was discussed in this earlier post.

After a few years, Kessler moved to 417 Tenafly Road in Englewood, New Jersey, as recorded in the 1940 census. His highest level of education was four years of college. In 1939 he worked 46 weeks and earned $2,974.

Kessler passed away October 12, 1950, in Oak Hill, Missouri, according to his death certificate. He was buried in the family plot at Hill Cemetery, Bourbon, Missouri.

Comments:
Greetings. Thanks for your blog. I recently came across a cartoon by kessler, that was published in automoble daily news oct 1926. This is not a cut out from a magazine. I am wondering what to do with the signed framed print. It features the V.P of chysrler. thank you