Edward Courtney Dunkel was born in Baltimore, Maryland, on December 21, 1902. His full name and birthplace was found in a family tree at Ancestry.com. The Social Security Death Index had his birth date. His parents were John and Sadie, both Pennsylvania natives.

In the 1910 U.S. Federal Census, Dunkel was the youngest of six children. His mother was a widow and head of the household. They resided in Baltimore at 1037 West Saratoga Street. A listing in the 1918 Baltimore city directory said Dunkel, a clerk, lived with his mother at 1728 East Chase Street.

According to the 1920 census, that address was Dunkel’s sister’s family. Sybil was married to John Dickel, who was head of the household, which included Dunkel, Dunkel’s mother and older brother John, a widower. Dunkel worked as a salesman in a grocery store.

Lambiek Comiclopedia and Who’s Who of American Comic Books 1928–1999 both said Dunkel attended the “Maryland Institute of Arts.”

The 1923 Baltimore city directory listed Dunkel as a cartoonist residing at 63 Raspe Avenue. Three years later, Dunkel’s listing was, again, at 1728 East Chase Street. Also in 1926, this classified ad appeared in the June 19 issue of the Fourth Estate:


Cartoonist, young artist with five years experience in art departments on newspapers in the East desires new connections with paper in fair sized town. Will go anywhere as long as there is an opportunity to make a name for himself. Samples of work on request. Courtney Dunkel, care Baltimore News, Baltimore, Maryland.

Dunkel’s Radio Bugs was in the Editor & Publisher annual syndicate directory but it is unclear if it was ever published. According to American Newspaper Comics (2012), Dunkel produced the Fumble Family, a 1928 weekly strip syndicated by the Autocaster Service. 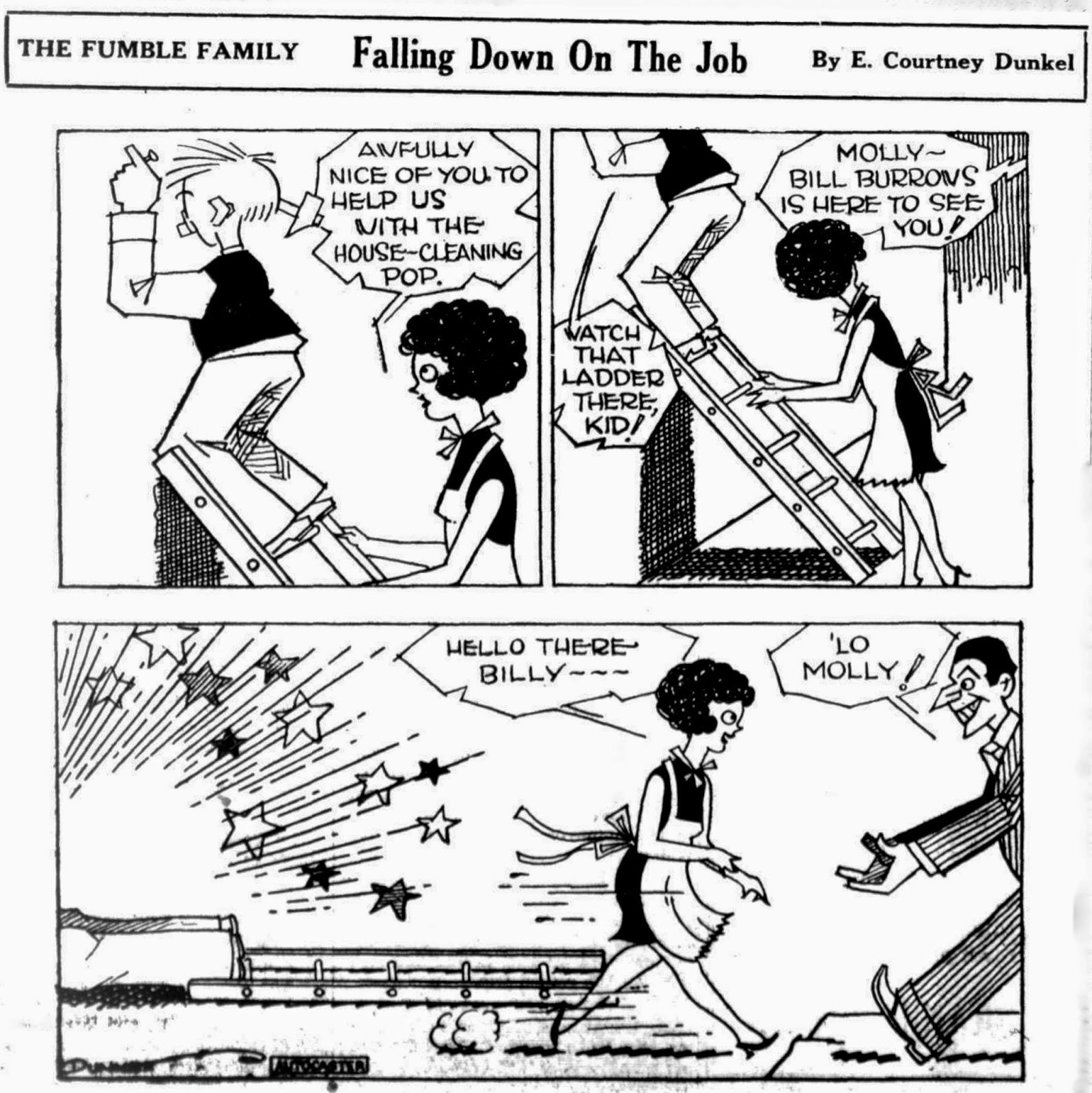 His News Laffs had a one-month run in 1930. The Catalog of Copyright Entries, Part 4, Works of Art, Etc., 1932, New Series, Volume 27, Number 3, has an entry for Dunkel’s Jigsaw Puzzle Laughs, whose publishing history is unclear. Dunkel was one of the contributors to the collection of daily gag panels, Chirps and Chuckles, from the King Features Syndicate, published in the first half of 1937. In the Editor & Publisher, January 22, 1966, Dunkel said he was the colorist on the Hairbreadth Harry Sunday pages, but the exact dates are not known.

The 1940 census recorded Dunkel, his wife, Catherine, and three-year-old daughter, Sara, in New Rochelle, New York at 46 Park Place. According to the family tree, Dunkel remarried to Alverta May Boyer on January 14, 1946.

Dunkel provided artwork for an advertising campaign according to Printers’ Ink, April 21, 1944:

Gag comics, running under the title Tru-Fit Ticklers, created so much interest for Tru-Fit Clothes, Baltimore, that the idea was expanded into a continuity strip. The agency responsible for the campaign, Leon S. Golnick and Associates, believes it is the first tri-weekly continuity strip devoted to advertising.

The idea started with a panel of three pictures, the third invariably featuring the product and the box in which it was packed, and showing ludicrous and utterly impossible situations. From there it developed along the lines of non-advertising comics, which began with daily gag panels and then changed into continuity strips. It was Dr. Gallup’s discovery that comics were the first and most read feature of daily newspapers that led to their adoption for advertising purposes.

Now “Henry” and “Little Lulu” have pointed toward the use of pantomime and “Shipwreck Sam,” the creation of Courtney Dunkel for Tru-Fit, leads in becoming a pantomimic continuity strip.

“Shipwreck Sam” is believed by his creator to be unique in two particulars: He is a continuity advertising cartoon character and his various adventures are treated, and will continue to be viewed, from a nonsensical rather than a sober dramatic angle such as many newspaper comics seem to carry these days.

It is planned to keep the humor in good taste and with a patriotic background when that can be done unostentatiously. Artist, agency and advertiser believe that “Shipwreck Sam” will fill a need and may start a trend.

Dunkel drew a pantomime strip, Hannah, which ran from late 1944 to 1947. The next two Dunkel strips were Too Funny for Words, which ran from 1950 into 1952, and Just a Moment, which ran about four years, from 1951 into 1955.The 1957 Press Intelligence Directory listed Dunkel on the staff of the York Dispatch in Pennsylvania. The date of his move to York is not known.

In his early 70s, Dunkel drew the daily connect-the-dots panel, Draw Your Own Conclusion, which ran from 1974 to 1979. The Working Press of the Nation, Volume 1 (1977) said Courtney Dunkel was an editorial cartoonist at the York Dispatch.

Some of Dunkel’s comic book credits can be viewed here and here. A 1973 press photograph of Dunkel is here. A journalist recalled his memories of Dunkel and the York Dispatch here.