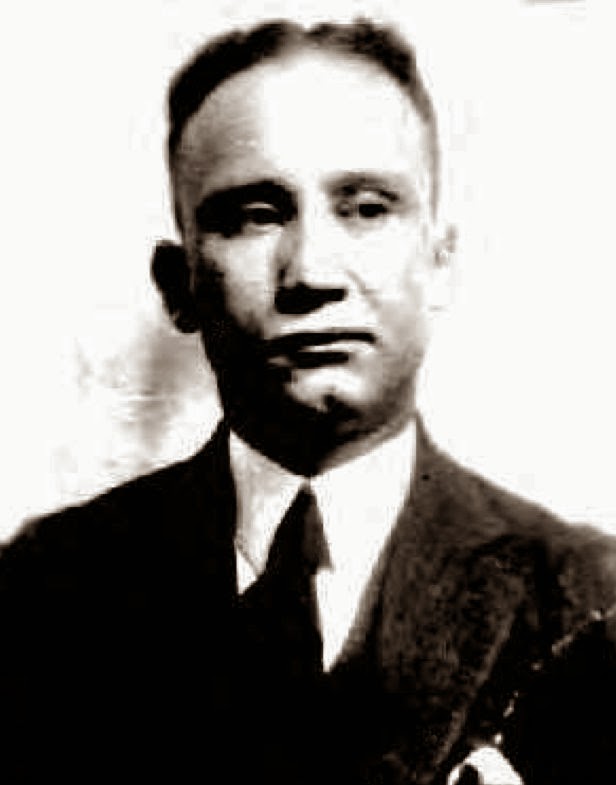 Al Zere was the professional name of Alfred George Ablitzer, who was born in Brooklyn, New York, on July 4, 1889. His full name and birth information is from his World War II draft card. I came across two cases in which his surname was spelled with a second “e”, Ablitzere.

In the 1900 U.S. Federal Census, Zere was the seventh of eight children born to Pierre, a tailor, and Stephanie, both French emigrants. The family resided in Brooklyn at 463 Carlton Avenue.

According to the school’s yearbook, The Oracle, Zere attended Adelphi College, in Brooklyn, during the years 1906 and 1907. “Ablitzere” was the spelling in the 1907 Oracle.

By 1910, just Zere and a younger sister were living with their parents in Brooklyn at 241 Wyckoff Street. Zere was a newspaper artist.

The Fourth Estate, January 9, 1926, profiled Zere, who provided a self-portrait, and said:


Alfred G. Ablitzere is the real name of the talented young gentleman who draws So This Is Married Life! for King Features Syndicate under the signature “Zere.” “Zere” has had a varied life. He has always managed, too, to burn his bridges behind him—or, more literally, to break his dishes behind him! If that sounds funny, listen:

After studying art seriously, he got a job painting china dishes. He didn’t like the work and didn’t want to quit, either. So he got himself fired in a week by breaking so many dishes the firm couldn’t afford to keep him.

“Zere” was born in Brooklyn and studied art at Adelphi College, under the tutorship of J. B. Whitaker, the noted landscape painter. He won several medals for drawing and painting and was considered one of the most promising students.

Soon he got a job on the Brooklyn Eagle. His pay was nothing a week. His work was to experiment on comics.

When he finally got up Buttons & Fatty, a strip about two bell boys, his pay was raised. Buttons & Fatty, begun twelve years ago, is still a Brooklyn Eagle feature, drawn now by another artist. 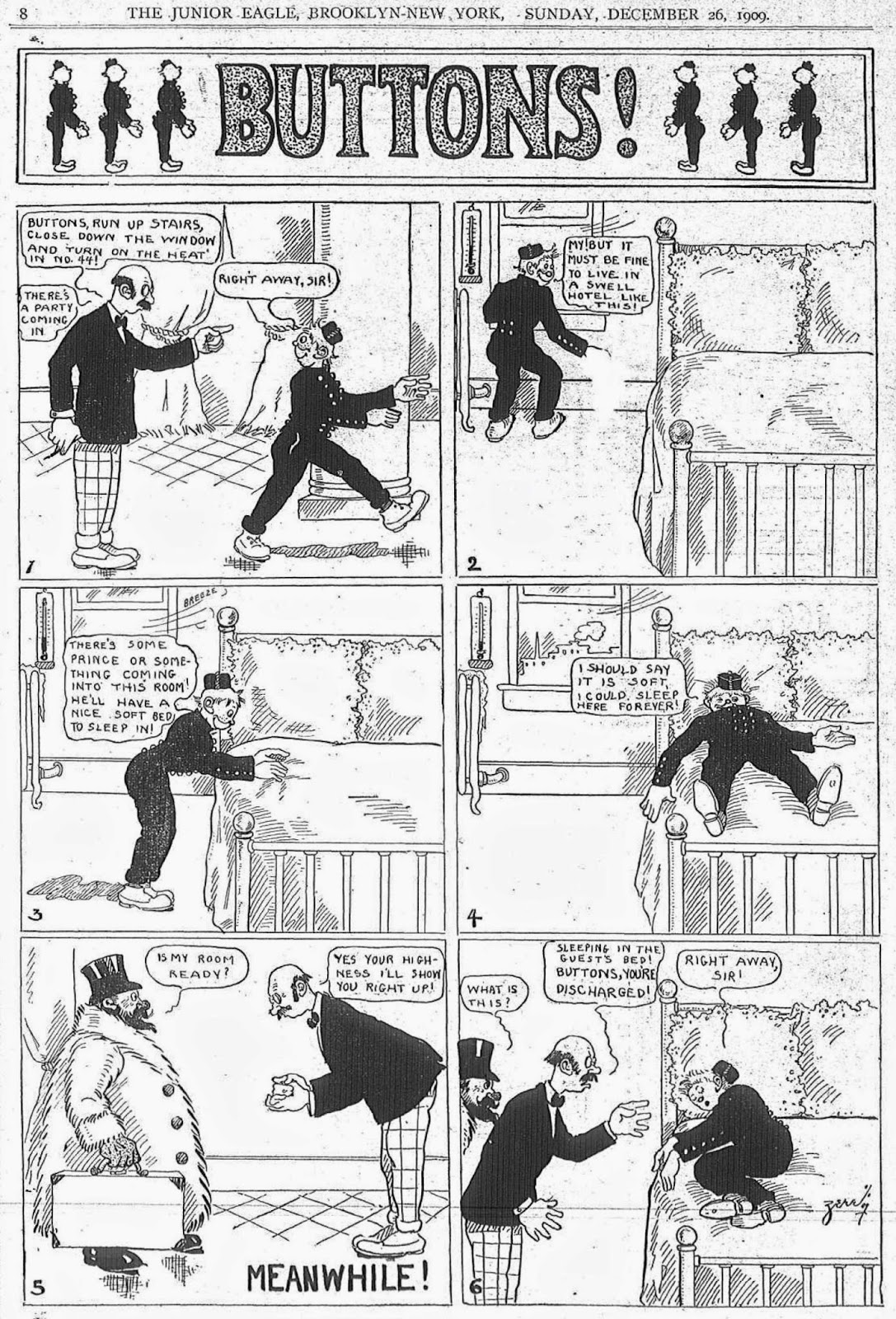 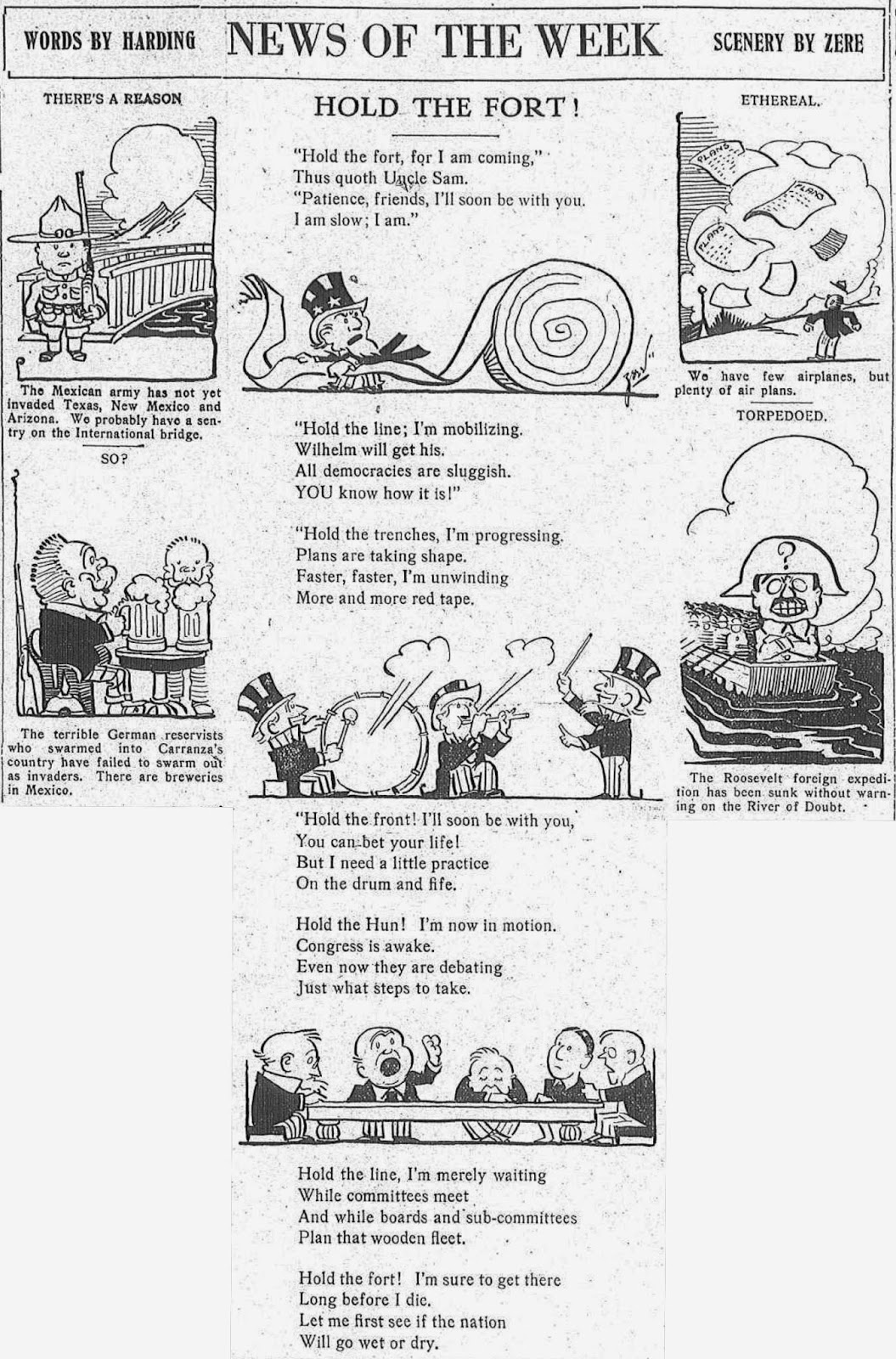 In June 1917, Zere signed his World War I draft card which said his address was 82 71st Street in Brooklyn. He was a Brooklyn Daily Eagle cartoonist whose description was medium height and build with blue eyes and blonde hair.


He joined the army as a private when the World War began. He was yanked from drill to teach wounded soldiers how to draw. He was offered a commission but refused to remain at this work, feeling the lust for adventure, and went overseas. But there too he was yanked from the force and sent to Navarre, France, to run a newspaper called the Martian in the big hospital center at Mars. 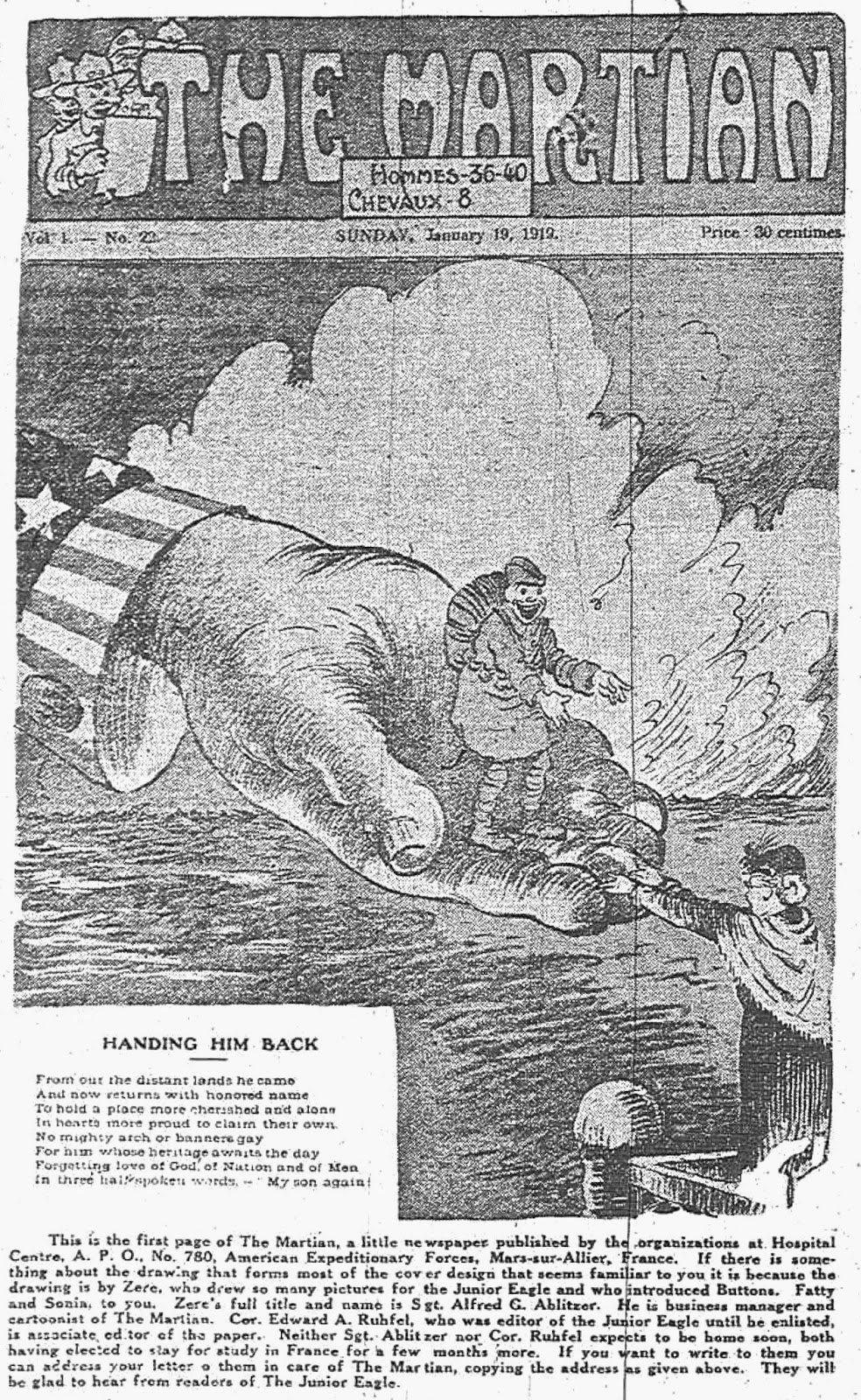 This is the first page of The Martian, a little newspaper, published by the organizations at Hospital Centre. A.P.O., No. 780, American Expeditionary Forces, Mars-sur-Allier, France. If there is something about the drawing that forms most of the cover design that seems familiar to you it is because the drawing is by Zere, who drew so many pictures for the Junior Eagle and who introduced Buttons. Fatty and Sonia, to you. Zere’s full title and name is Sgt. Alfred G. Ablitzer. He is business manager and cartoonist of The Martian. Cor. Edward A. Ruhfel, who was editor of theca Junior Eagle until be enlisted, is associate, editor of tho paper. Neither Sgt. Ablitzer nor Cor. Ruhfel expects to be home soon, both having elected to stay for study in France for a few months more. If you want to write to them you can address your letter to them in care of The Martian, copying the address as given above. They will be glad to hear from readers of The Junior Eagle.


Associated with him on this newspaper was Edward A. Ruhfel, now financial editor of the Brooklyn Eagle.

After the war be continued Buttons & Fatty for the Brooklyn Eagle and also started a new feature section for that paper. He was soon called to work on the New York Evening Post, where he did a general cartoon and later Man the Master, his first married life strip. 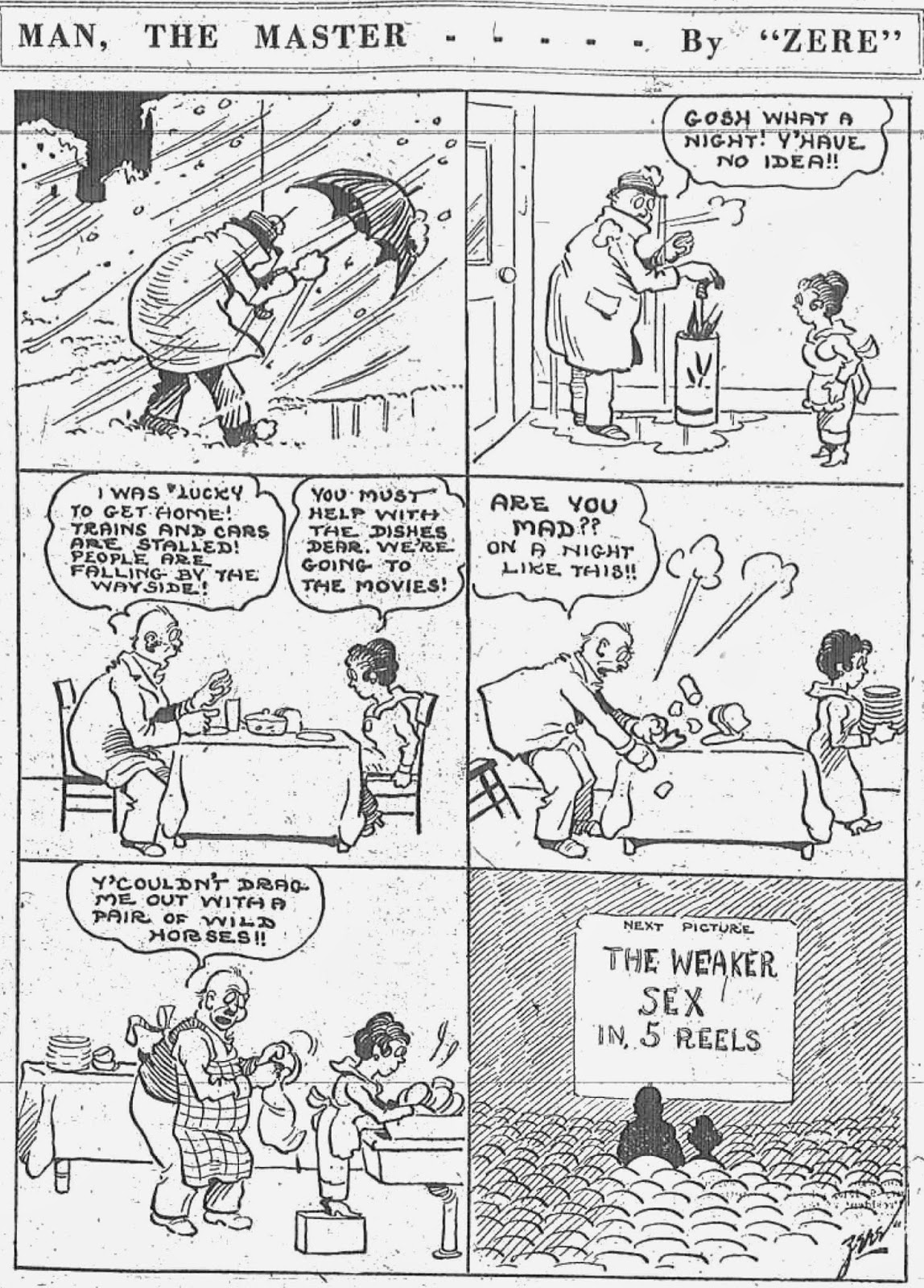 When the Post changed hands he was sent for by King Features Syndicate and started So This Is Married Life! In this strip he details the adventures of Mr. and Mrs. Waffle. He does not go in for “gags” as much as for simple human interest stuff and a certain continuity from day to day in the adventures of the pair.

Once in a while “Zere” hops over to Europe. He can speak French fluently, in fact served as an interpreter during part of the war time. “Zere” is active in sports, particularly tennis.

According to the 1920 census, Zere, his sister and mother resided in Brooklyn at 82 71 Street. On June 2, 1920, Zere applied for a passport to visit France, Switzerland and Italy for “pleasure and professional representative.” At the time he was an illustrator and cartoonist, residing at 78 72nd Street, Brooklyn. Attached to the application was a letter by his brother Pierre who certified that Zere was his brother. The letter was notarized by another brother, Edward. Also attached was a letter, below, from the managing editor of the Eagle. In addition to his 1920 trip, he sailed to Mexico in 1922; to Bermuda in 1925; and to Europe in 1926. 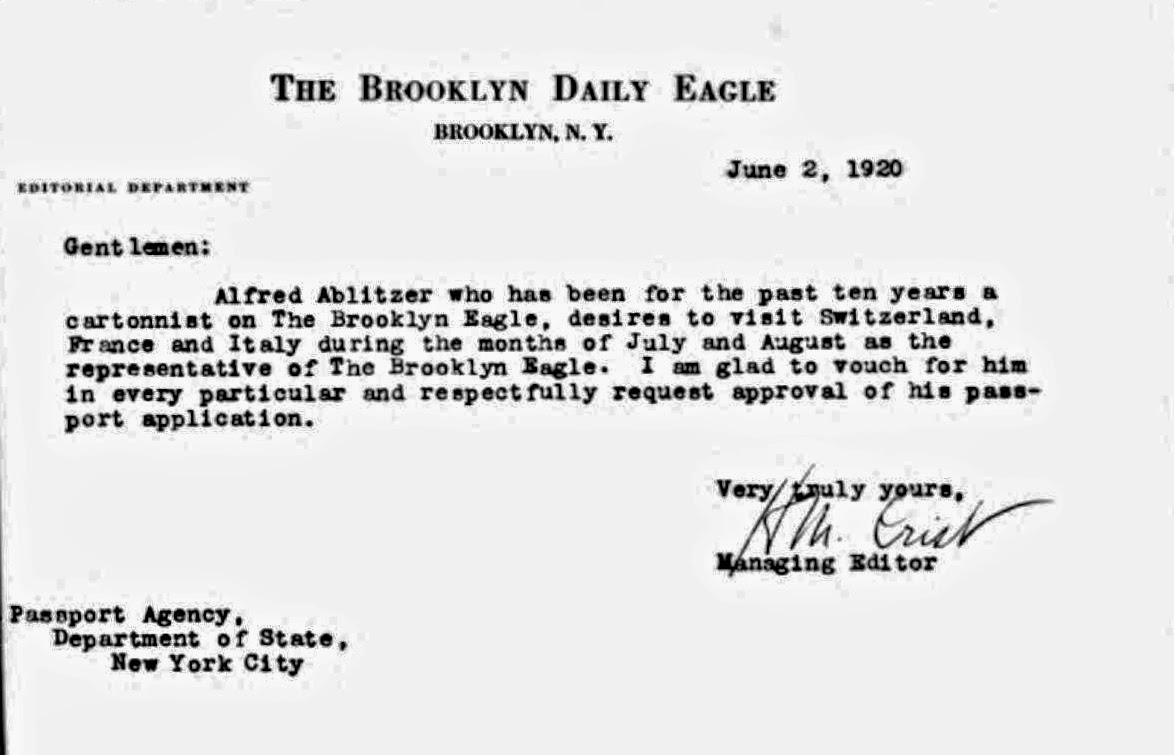 I naturally assumed that “Zere” was married, else how could he picture wedded life with such fidelity? But when I asked him, I found that I had been mistaken.

“Maybe the fact that I’m not married,” he laughed, “makes it easy for me to poke fun at those who are. Anyway, I might eventually marry. But first I must catch up with my work.” 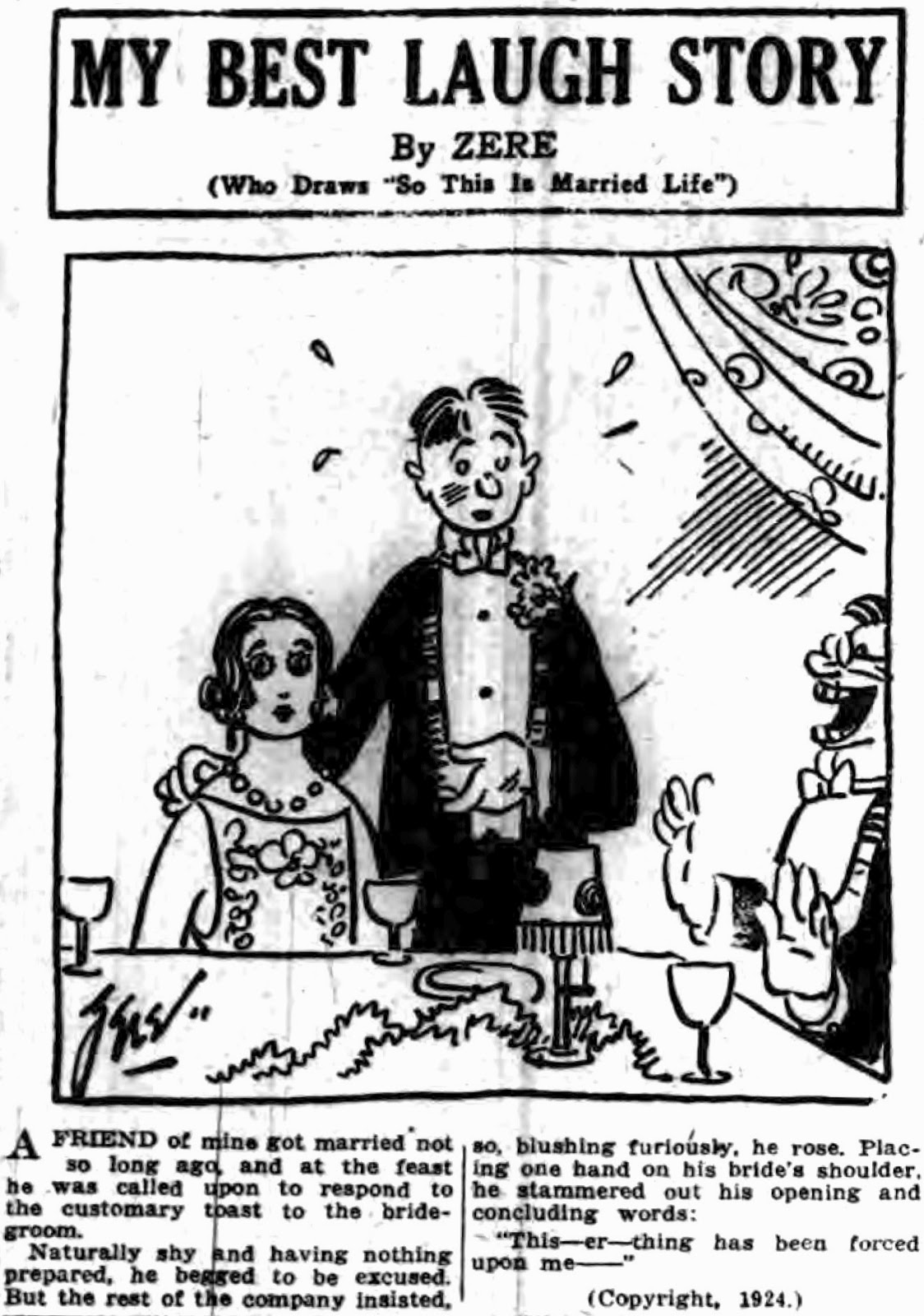 Buffalo Courier 7/9/1924
panel text below:
A friend of mine got married not so long ago and at the feast he was called upon to respond to the customary toast to the bridegroom.

Naturally shy and having mouthing prepared, he begged to be excused. But the rest of the company insisted, so, blushing furiously, he rose. Placing one hand on his bride’s shoulder, he stammered out his opening and concluding words:

“This–er–thing has been forced upon me–”

Miss Biedermann is the daughter of Mr. and Mrs. Louis Biedermann of Hollis, L. I., who have announced her engagement to Alfred G. Ablitzer of Bay Ridge. Mr. Ablitzer is the artist whose pen name is “Zere.” The wedding will take place in the near future.

The New York, New York, Marriage Indexes, at Ancestry.com, said they married on March 17, 1928 in Manhattan. Later that day they went on a cruise. The passenger list said they lived at 6820 Ridge Blvd., Brooklyn.

Louis Biedermann was an illustrator who had worked at The World. One of his notable illustrations was “New York City as It Will Be in 1999”. The Long Island Daily Press, July 20, 1935, said Zere’s father-in-law was “…in charge of comic strips and other art for the Hearst syndicates.”

In 1930, Zere and his wife lived in Forest Hills, New York at the Tennis Place Apartments. His occupation was newspaper artist. The Brooklyn Eagle, July 22, 1934, published this item:


...Right now, Ablitzer and the Mrs., who was Henrietta Biedermann of Jamaica before her marriage, are at their summer home on Shelter Island. Mr. Ablitzer spends all of his spare time fishing for weaks and blues in Peconic Bay and raising wire-haired terriers. In the winter months, the Ablitzers live at 193-02 100th avenue, Hollis. They have no children.

The 1940 census recorded them in Forest Hills at 98-120 Queens Boulevard. He continued as a cartoonist. On April 26, 1942, he signed his World War II draft card. United Features Syndicate was his employer. 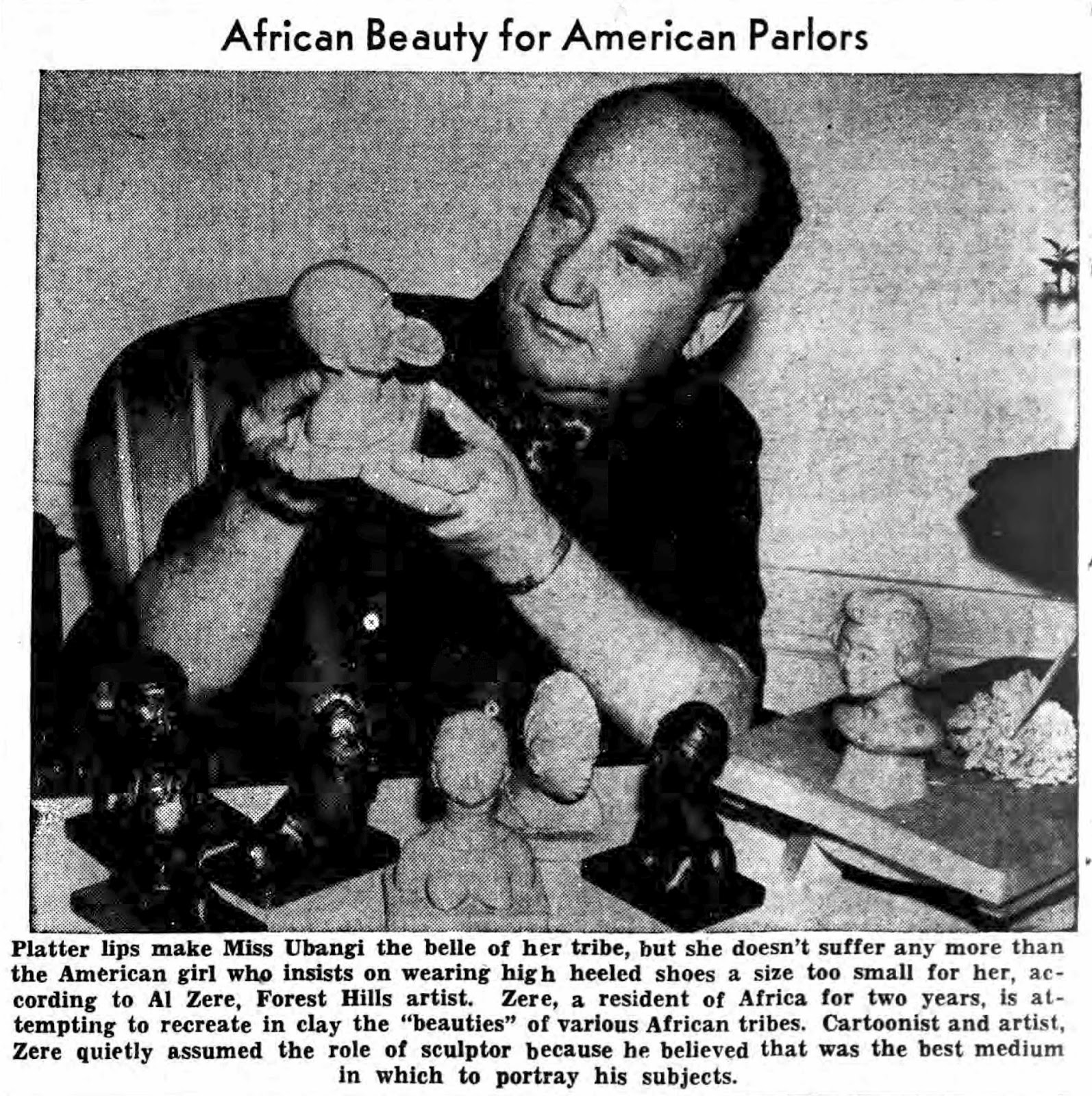 Long Island Daily Press 10/5/1940;
caption text below:
Platter lips make Miss Ubangi the belle of her tribe, but she doesn’t suffer any more than the American girl who insists on wearing high heeled shoes a size too small for her, according to Al Zere, Forest Hills artist. Zere, a resident of Africa for two years, is attempting to recreate in clay the “beauties” of various African tribes. Cartoonist and artist, Zere quietly assumed the role of sculptor because he believed that was the best medium in which to portray his subjects.

According to American Newspaper Comics (2012), Zere produced over a dozen comic series including Susie Sunshine and Flossie. Man, the Master began January 27, 1920 in the Brooklyn Eagle, where it appeared once or twice a month on the front page. In November that year, Zere moved to the New York Post where Man, the Master debuted on the 16th and may have ended September 1 1922. A photograph of Zere at his drawing board is here. 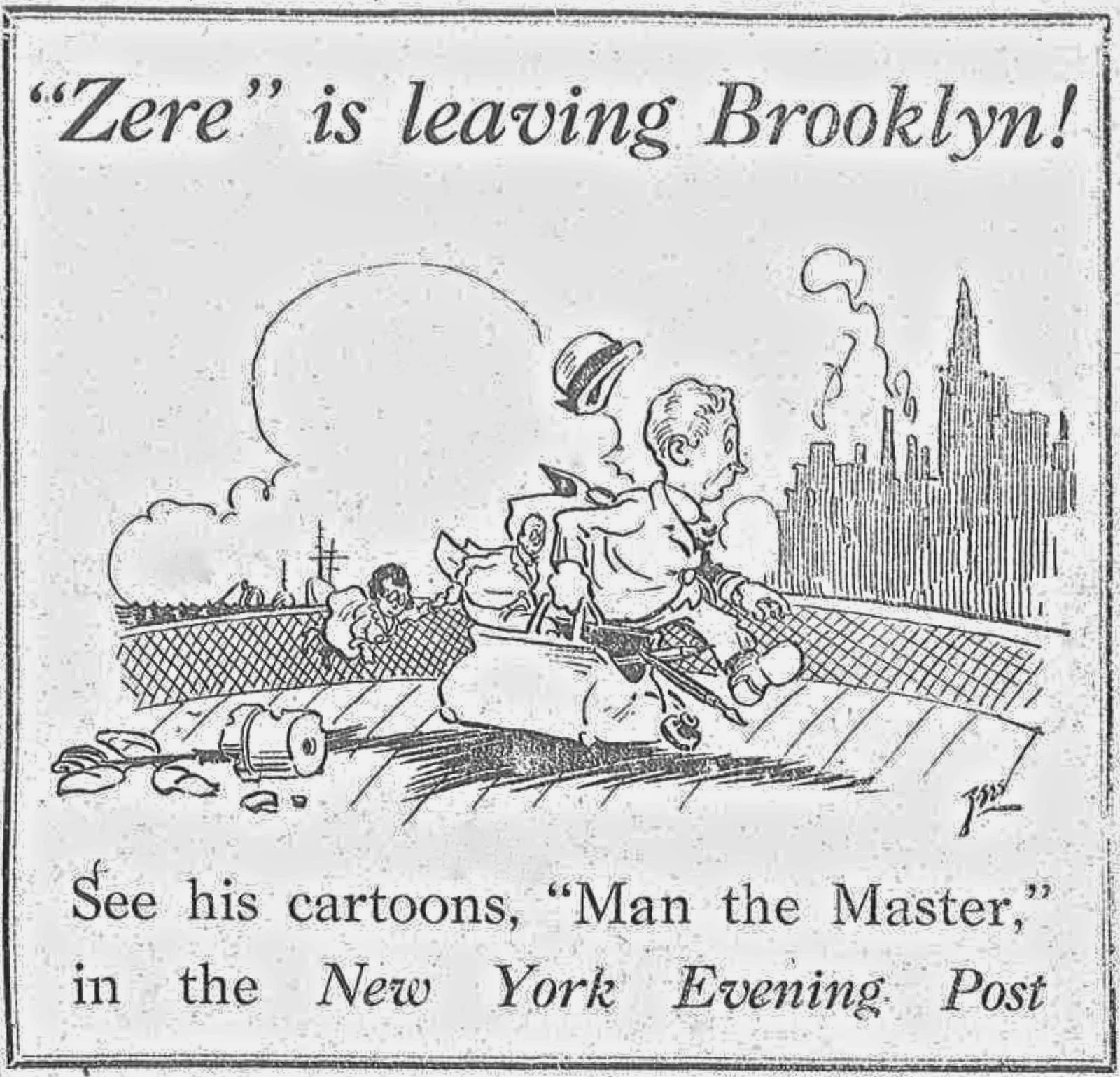 Zere passed away November 1968, according to the Social Security Death Index.

Yes, AL ZERE did also work under the name ﻿JOURDAIN