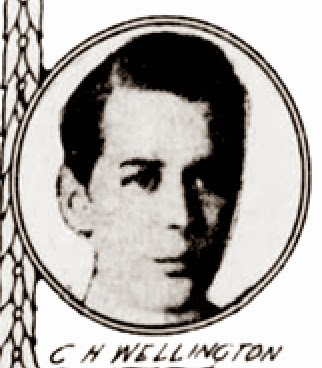 Charles Hewitt “Duke” Wellington was born at Edore Central Township, St. Louis County, Missouri on January 13, 1884, according to the Missouri Birth Records and his World War I draft card at Ancestry.com. His parents were James, a commercial traveler, and Josephine, whose maiden name was Hewitt.

Wellington’s father died before the enumeration of the 1900 U.S. Federal Census, which said his mother operated a boarding house in St. Louis at 3863 Washington Boulevard. She also cared for her parents, Charly and Carrie Hewitt. Wellington was not recorded there, but, according to Edan Hughes’ Artists in California, 1786-1940, “Wellington was educated at Smith Academy in his native city and at Washington University.” The 1901 St. Louis City Directory listed Wellington as a student who resided at 3863 Washington Boulevard.

Without citing any sources, the World Encyclopedia of Comics said: ”Wellington’s first published work appeared in the St. Louis Post-Dispatch and St. Louis Republic. He accepted, in 1908, an offer to draw for the Memphis News-Scimitar and later moved to Nashville for a six-month stint on the Tennessean.”

The 1903 St. Louis City Directory listed Wellington and his mother at 522 North Newstead Avenue. He was an artist for the Post Dispatch. The 1907 Memphis City Directory had listings for Wellington and his mother at 908 East McLemore Avenue. His occupation was artist, News Scimitar. The New York Times, April 2, 1942, said he was a cartoonist on the Memphis Commercial Appeal.

A photograph of Wellington and other cartoonists appeared in the comic section of the St. Louis Star-Chronicle, June 18, 1905 (below). 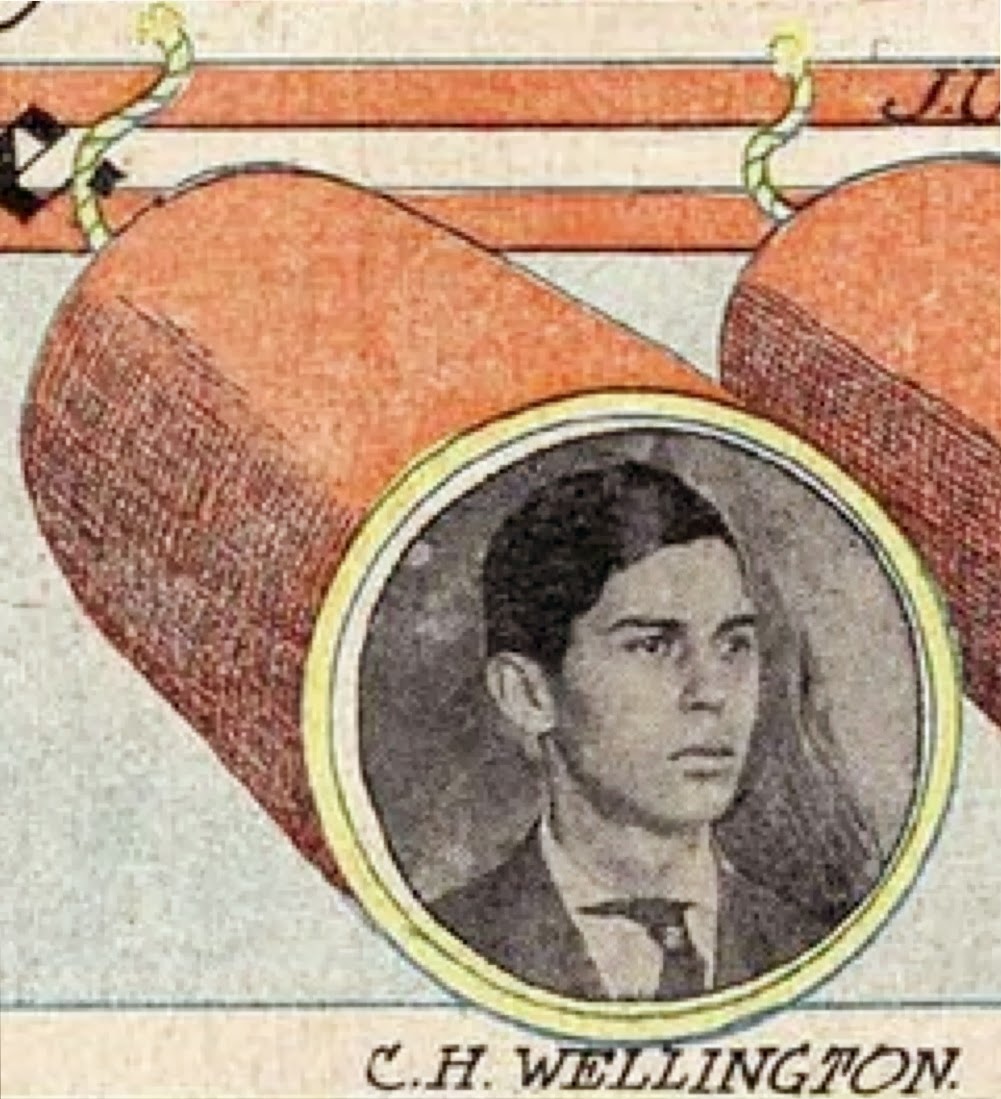 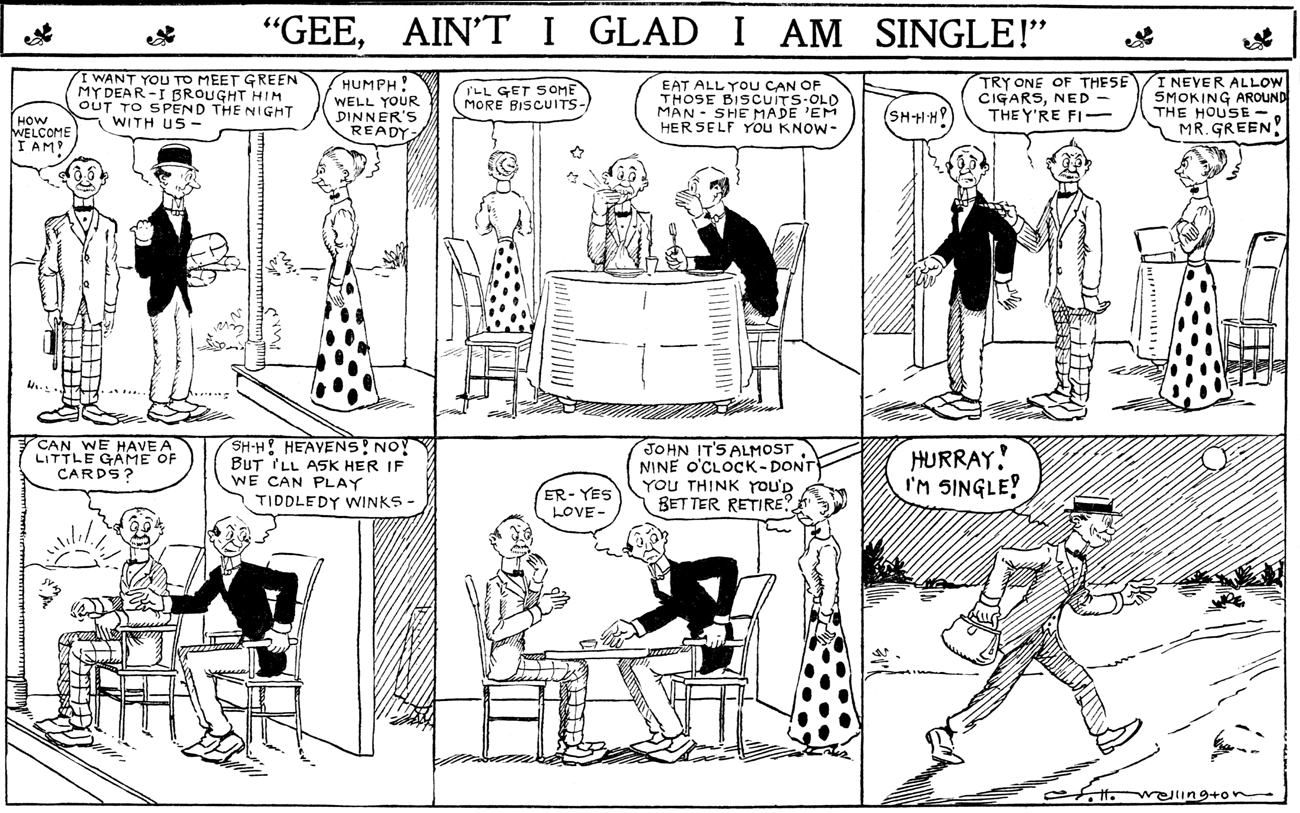 The Bookman, April 1910, said Wellington got his idea for There’s a Reason after reading an advertisement for Grape Nuts.

He signed his World War I draft card on September 12, 1918. His address was the Friar's Club, West 48th Street, and occupation was cartooning for the Newspaper Feature Service. His description was medium height, slender build, and brown eyes.

Wellington has not been found in the 1920 census. Artists in California said he moved to California around 1925. The 1928 San Fernando City Directory listing said the cartoonist lived with his wife, Emily, at 9920 Toluca Lake Avenue.

In the 1930 census, the couple lived in Los Angeles, California at 9920 Toluca Lake Avenue. They had married in 1919. His occupation was cartoonist for the New York Tribune.

Wellington’s address and occupation remained the same in the 1940 census, which said he completed four years of college.


Charles H. Wellington, 56, creator of the comic strip, “Pa’s Son-In-Law, ” which ran in the Daily News for years until recently, died at his home, North Hollywood, Cal., Wednesday. He created the strip, which was one of the most popular of the cartoons, in 1914. The daily strip, which ran in the Daily News from the New York Herald Tribune, was discontinued because of Mr. Wellington’s recent illness, although he continued his Sunday feature. Surviving are his wife and his mother.