Lois Millicent Bull was born in New York City on September 18, 1900, according to passenger lists at Ancestry.com. Her full name was found in the 1922 Llamarada yearbook of Mount Holyoke College and the 1924–1925 Catalogue of Columbia University. Her birth came after the 1900 U.S. Federal Census enumeration.

Searching for Bull in the 1910 census was challenging. A clue was reported in a death notice from the New York Times, February 21, 1926, which mentioned Bull as the granddaughter of William H. and Mary Augustus Bull. Also named was Bull’s aunt, Mrs. Charles B. Elmer. Bull’s grandparents were found in the 1880 census. They resided in West Springfield, Massachusetts with their two daughters, Susie, 6, and Clara, 3. In the 1900 census, Bull’s mother, Susan, was married to Edwin Levy. The couple were part of Clara’s household; Clara had married Charles B. Elmer. Also in the household was the daughters’ mother. They resided in New York City at 270 West 123 Street. About three months after the census enumeration, Bull was born to the Levys.

The 1910 census recorded Bull as “Lois M. Levy”, her parents and adopted brother, Paul, in Springfield City, Hampden County, Massachusetts, at 161 Nilbraham Road. Her father worked as a printer in a printing office. It’s not known why Bull changed her family name.

Listed as “Lois Bull" in the 1920 census, she was a student at the Hephzibah House–Bible Training School in New York City at 263 West 25th Street. The date of her enrollment is not known. In fall 1920 Bull was a freshman at Mount Holyoke College in Massachusetts, according to the Springfield Republican (Massachusetts), September 27, 1920. The Republican, October 31, 1921, reported Bull’s membership in the school’s debating team. The May 9, 1922 issue of the Republican said Bull was on the volleyball team. The New York Tribune, October 1, 1922, said Bull’s address was 31 Claremont Avenue, in Port Chester, New York.

Bull’s writing talent was acknowledged in the Tribune, March 8, 1920, which published her letter.

According to the Augusta Chronicle (Georgia), December 24, 1922, Bull was a student at the Columbia School of Journalism and won a prize for best story, which was titled, “Interview, Mme. Sigrid Onegin of the Metropolitan Opera.” Competing against 15 fellow students, Bull’s prize was a pair of season tickets for the Philadelphia Orchestra concerts. Bull was one of the 3,319 students who received their degrees from Columbia University, as reported in the New York Times, June 4, 1924. She was awarded a Bachelor of Literature in Journalism.

For the New York Graphic, Bull wrote the Antics of Arabella which began in October 1925, according to American Newspaper Comics (2012). About one of the first Arabella models, Variety, December 30, 1925, said: “Rose Wenzel has had many offers to pose for artists since demonstrating L. M. Bull’s ‘Antics of Arabella’ in the N. Y. “Graphic.’” Variety, January 13, 1926, mentioned Wenzel, a performer in the show, Vanities:


…Miss Wenzel is known as “The Arabella Girl,” a creation which she posed for “The Graphic” in “The Antics of Arabella,” a comic strip used in the health section of that publication….She said, though posing for the strip for four months, she never received payment for her services. Her main object, she said, was originally to get publicity....

The New Yorker took aim at the Arabella strip in its  November 17, 1928 issue. (Be sure to read Cole Johnson’s explanation in the comments.)

During the Forties, Bull wrote three books under the name Cecily Bowman; Dreaming True (1945), Forever Yours (1946) and Tomorrow’s Promise (1947). Using her own name, Bull’s novel, Gold Diggers, was published in 1949.

In 1961, Bull renewed the copyright on several of her works. She had written several short stories for Complete Detective Novel Magazine: “Death Rides Engine Thirteen” (June 1933), “The Trail of an Heiress” (July 1933), “The Missing Finger” (November 1933), “Murder in the Air” (November 1933), “The Jig Saw Murder” (December 1933), “The Sodium Chloride Alibi” (January 1934). Another pseudonym she used was Dale O’Hara. The magazine also published “Yellow Robe Murders” (January-February 1935) under her Melville Burt pseudonym. 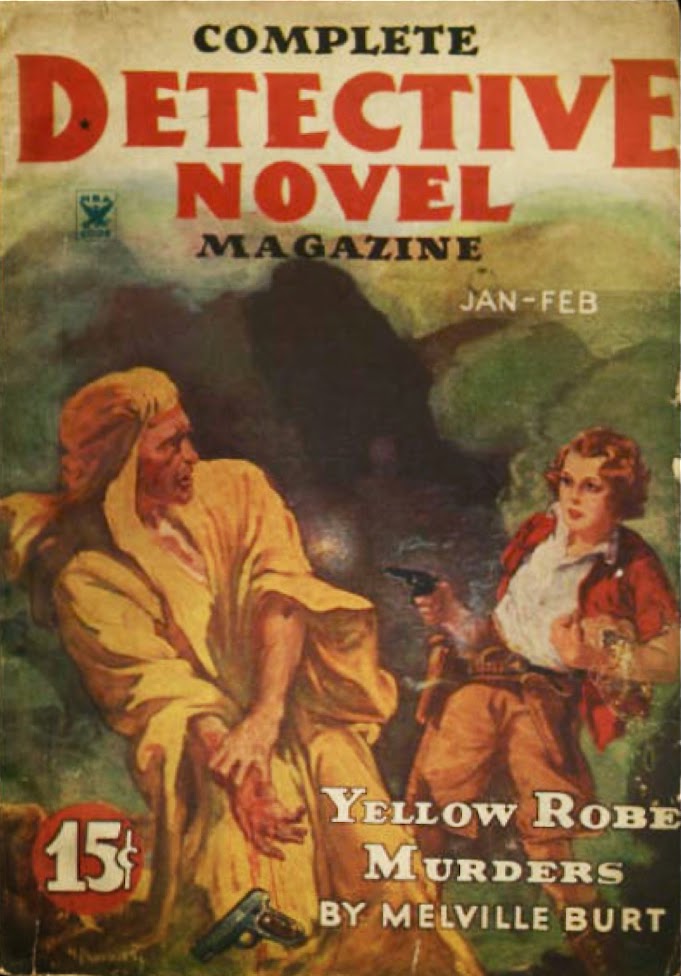 Bull passed away September 21, 1971, according to a death notice in the New York Times published on the 25th.

Comments:
Thanks for the info! I've read "Broadway Virgin" and "Collect" recently and loved them both. Nice to learn more about Bull. And you mention her publishing "Gold Diggers" in 1949 under her own name, but it turns out "Gold Diggers" was just a flashier title for the reprint of her book "Collect". If you look at the "Gold Diggers" cover underneath the title "Collect" is written!