David George “Dave” Plotkin was born in New York City in April 1899, according to the 1900 U.S. Federal Census. He was the youngest of four children born to Louis and Sarah, both Russian emigrants. The family resided in Manhattan at 254 Madison Street. The Brooklyn Standard Union, June 30, 1926, said Plotkin was born on Henry Street.

In 1910, Plotkin was the fourth of seven children. His parents and siblings lived in Brooklyn at 331 Sackman Street. The 1915 New York State Census recorded their address at 317 Sackman Street.

Plotkin was unemployed according to the 1920 census. The entire Plotkin household remained in Brooklyn but at a different address, 578 Cleveland Street.

The Brooklyn Standard Union, September 7, 1923, published a list of the 167 people who passed the state bar exam which included Plotkin, who resided at 509 Elton Street.

Plotkin’s Ghetto Gutter and Other Poems was published in 1926; a review is here. The website, Strangers to Us All, quoted part of the “Author's Introduction”, which said:


I had just completed a three year's course at law school, studying the Elizabethan playwrights and reading the Russian novelists, and after being admitted to the bar of New York State, I became a Rube Goldbergian comic strip artist and columnist.

The New York Times, April 1, 1968, said “he attended City College and graduated from the Brooklyn Law School, but practiced law only briefly.”

In the Church Notices section of the New York Evening Post, January 10, was an advertisement for the Community Church, Park Avenue at 34th Street, which had three events scheduled. At five o’clock was a poetry reading by Plotkin.

In 1934 he collaborated with Otto Soglow on the book, Wasn’t the Depression Terrible. The dust jacket is here, and several pages are here.

The following year, Plotkin and artist Chuck Thorndike produced Follies of the Great which was syndicated by Van Tine Features, who owned the copyright. 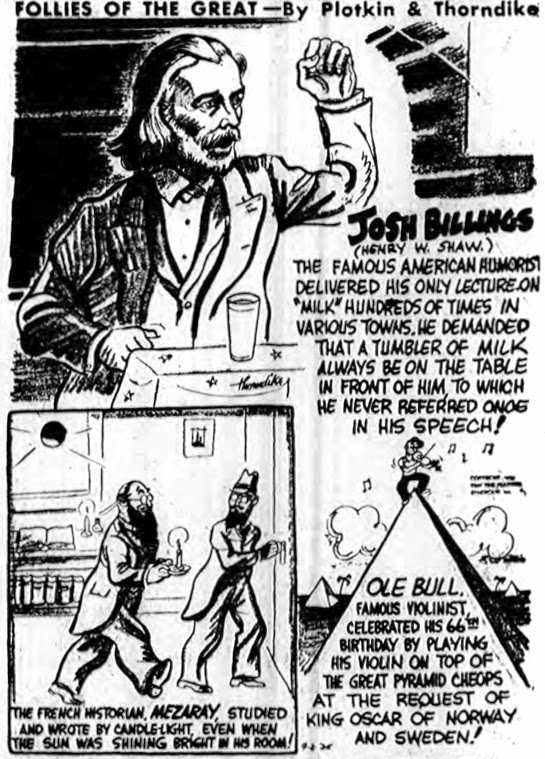 Plotkin’s father passed away June 10, 1942. The following day, the Brooklyn Eagle published an obituary and said, in part:

Plotkin’s next book was Rage in Singapore: The Cauldron of Asia Boils Over and published in 1942. The Deseret News, (Salt Lake City, Utah), October 4, 1946, published the column by George Sokolsky who provided some background information on Plotkin and how he came to write the books, Rage in Singapore and The Plot Against America (1946).

Sokolsky’s column prompted a response from the publisher, Sam Roth, who explained Plotkin’s role in his letter to the New York Sun, October 8, 1946.

The second book, The Plot Against America, caused Plotkin to be investigated by the U.S. Senate. The report, Investigation of Senatorial Campaign Expenditures, 1946, can be read here. (scroll about a quarter way down to page 5, Part II; Subjects Investigated; A. Primary Campaigns; 1. Montana)

The Deseret News said Plotkin lived in Woodstock, New York, when he wrote Rage in Singapore, and he was rejected by the Army because he was suffering “with manic depressive, psychosis, paranoid trend.”

Plotkin’s 1968 manuscript, The East Side Story, is in the collection of the New York Public Library.

Plotkin passed away March 30, 1968, in Brooklyn, according to the New York Times; two excerpts.


David George Plotkin, a poet and writer under the name David George Kin, died Saturday, near his home at 2214 64th Street, Brooklyn, his age was 68.