Klaus Fjalar Nordling was born in Pori, Finland on May 29, 1910 according to a family tree at Ancestry.com. He was the only child of Gustaf Ribert and Aili Karoliina Hemmila, whose marriage license was listed in the Brooklyn Daily Eagle, October 8, 1909. The family sailed aboard the S.S. Oscar II from Copenhagen, Denmark on August 22, 1912; they landed in New York City on September 3. They were counted in the 1915 New York State Census; his father was a photographer in Brooklyn. In the Daily Eagle, December 19, 1916, the November honor roll list included Nordling, who attended the Sunset Park School, Public School 169. According to his World War I draft card, Nordling’s father was a self-employed photographer. The family lived at 4213 8th Avenue in Brooklyn.


The Nordlings were recorded at the same address in the 1920 U.S. Federal Census. Nordling’s father had been in the U.S. since 1903. Their address remained the same in the 1925 New York State Census; his father was naturalized in 1923. In 1930, they lived at 4015 7th Avenue in Brooklyn. Nordling’s first name was recorded as “Frank” and his occupation was a clerk in the diplomatic industry.

The Ridgefield Press (Connecticut) reported the death of his wife, Lilja Heta Tellervo “Tel”, on December 5, 2003; excerpts from the obituary:


Mrs. Nordling was born in Cambridge, Mass., on March 30, 1910, the second of four children. Her Finnish-born parents, Risto and Milma Lappala, moved the family to Virginia, Minn., where they established a Unitarian ministry and raised their children among the forests, rivers and lakes of the north woods. True to her Finnish heritage Tellervo was named for a woods-maiden in the Finnish national epic, the “Kalevala,” and had a deep and life-long love of nature and the outdoors.

She was educated as a librarian, and lived briefly in Germany as a student until the imminent outbreak of World War II brought her back to the United States. Besides being fluent in Finnish, she also became proficient in German. She met Klaus Nordling, a cartoonist and comic book artist, while she was working as a translator for a Finnish newspaper in Brooklyn, N.Y. They married in March 1937, and lived in Brooklyn and Minnesota until moving first to Redding [Connecticut], and then in the mid-1940s to Florida Hill Road in Ridgefield [Connecticut], where Mr. Nordling worked at his home studio.

“Both dearly loved art, music, literature, their wonderful circle of friends, and living in Ridgefield,” said her daughter, Thea Nordling.

According to Who’s Who in American Comic Books 1928-1999, Nordling began his career as a gag cartoonist and caricaturist for Americana Magazine in the early 1930s, and then produced, under the name Fred Nordley, Baron Munchausen in the mid-1930s. The strip was syndicated by Van Tine Features which owned the copyright.

The late 1930s saw his entry into the comic book field. An overview of his comics career is at Wikipedia, and a list of his comic book credits is at the Grand Comics Database.

In the 1940 census, Klaus, his wife, Tellervo, and daughter Thea, lived in Brooklyn at 760 67th Street; the same place as in 1935. He was a cartoonist for publications. 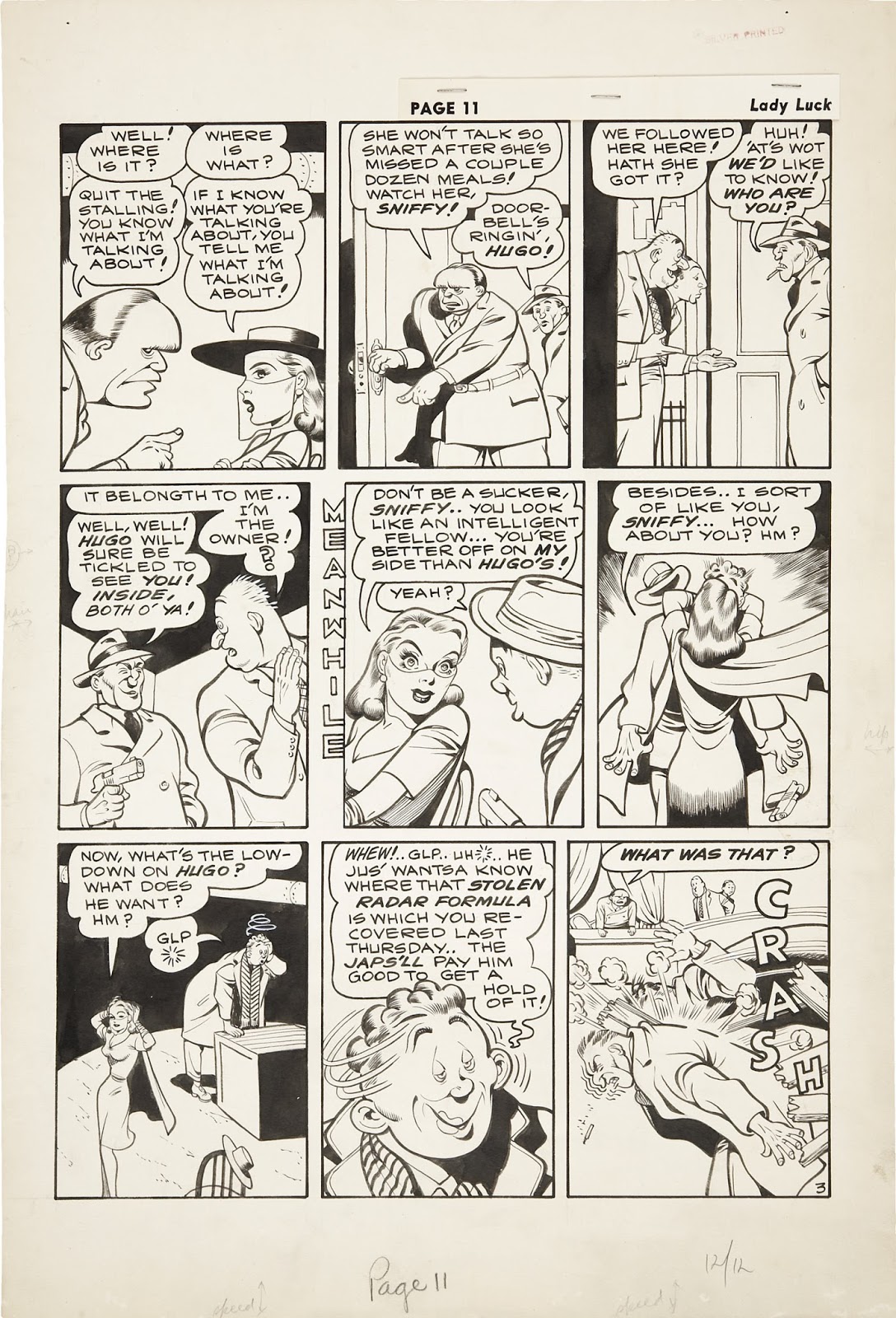 During the mid-1950s the newspaper, Bridgeport Telegram (Connecticut), reported his theater work as an actor and director. A photo of Nordling in Tobacco Road was published in The Hour (Norwalk, Connecticut), November 7, 1978. The Ridgefield Press, August 18, 1983, printed a photo of Nordling and his wife with another couple.

Nordling passed away on November 19, 1986, in Ridgefield, Connecticut, according to the Connecticut Death Index. Photos of the Nordling’s early Brooklyn residences are here. A chapter on Nordling is in Amerikansuomalaisia sarjakuvataiteilijoita (2008).