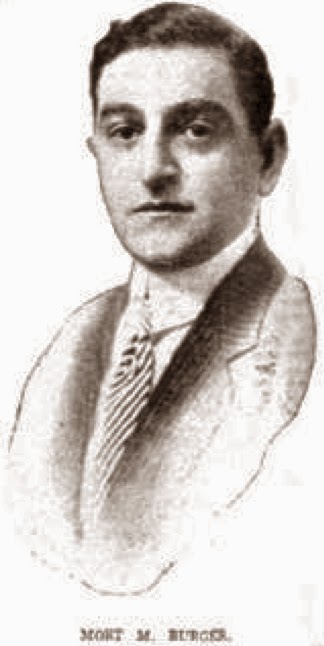 Mortimer Moses Burger was born in South Carolina on April 24, 1880 or 1881. His full name was on his World War I draft card which had his birth date as April 24, 1881. The 1900 U.S. Federal Census said he was born in April 1880. Information about his education and art training has not been found.

According to the 1900 census, Burger, an artist, resided in Scranton, Pennsylvania, at 423 Madison Avenue. His name was recorded as “Moses Burger”. His parents, Nathan and Regina, both German emigrants, and three siblings, Sallie, Gustave and Sidney, resided in Manhattan, New York City.

An article in the Fourth Estate, February 7, 1920, told of Burger’s early career.


Mort M. Burger…started his newspaper career at the age of 17, cartooning for the New York World under the direction of the famous Walt McDougall. Later he started a school of caricature with Dan McCarthy, another well known cartoonist….

In Printer’s Ink, April 23, 1902, McCarthy explained how their business, The National School of Caricature, operated.

After the school closed, Burger moved to New Orleans, Louisiana. He was listed as art manager of the Morning World, 210 Camp, in the 1908 New Orleans city directory. He stayed at the Hotel Gruenwald. The 1909 directory was not available.

According to the Daily Picayune (New Orleans, Louisiana), January 27, 1908, Burger, a photographer for the Morning World, was assaulted while attempting to photograph a former police inspector and judge. The February 6, 1908, New Orleans Item, said the local newspaper artists formed the New Orleans Newspaper Artists’ Society to exhibit their work. Burger was the society’s treasurer. 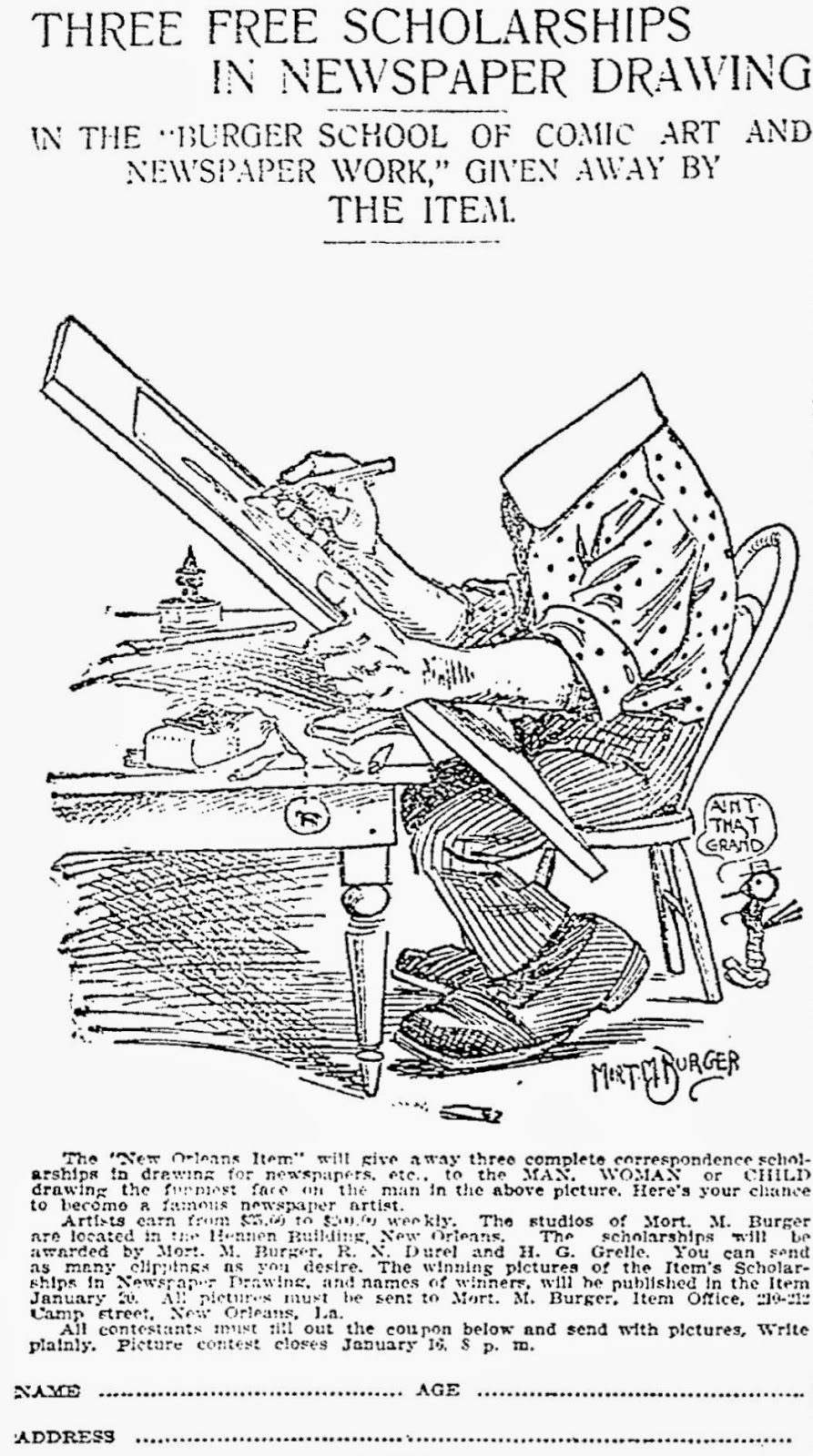 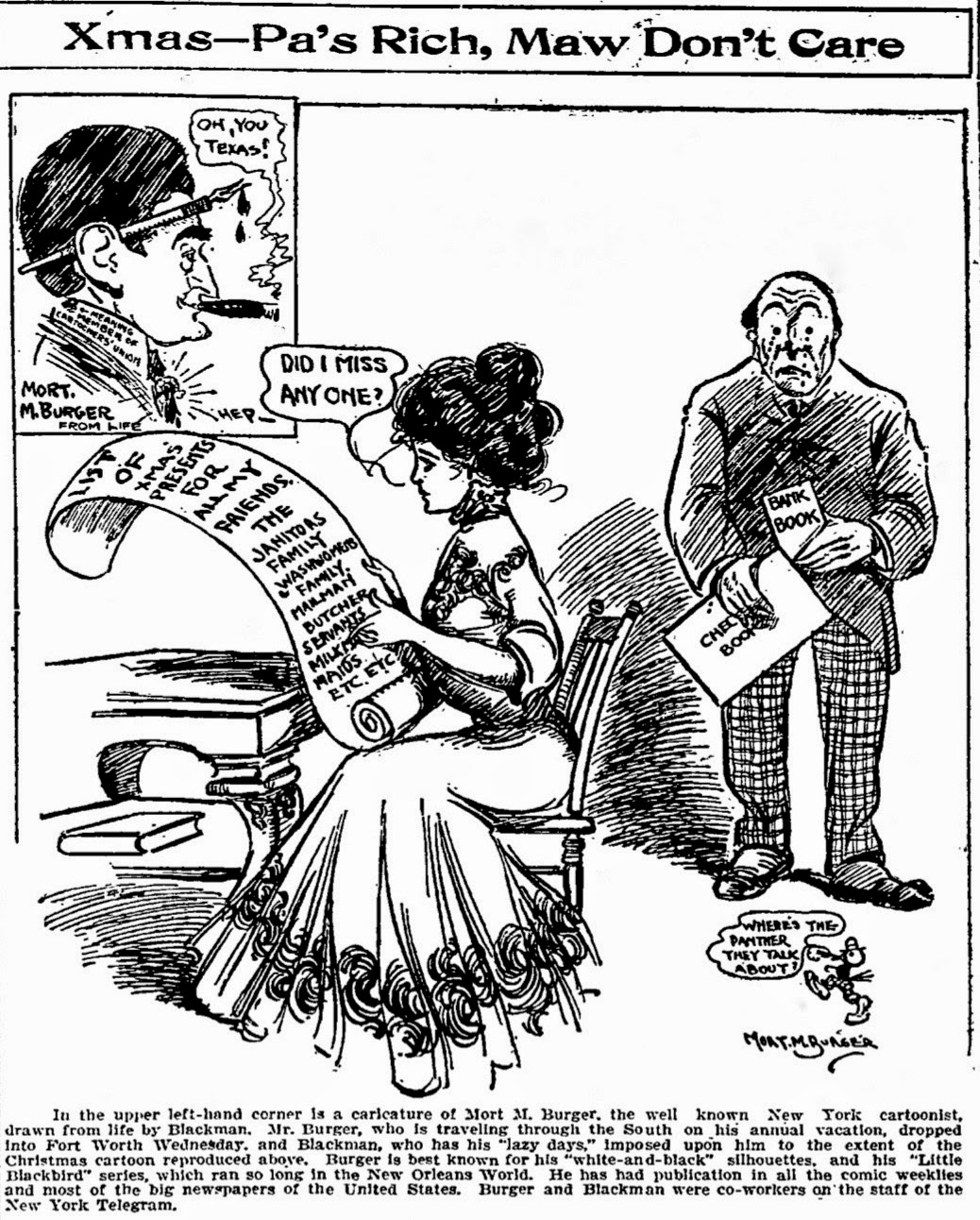 
A School of Art.

The Burger School of Art has just been opened in this city in the Cosmopolitan Bank Building, and executive offices in the Hennen Building. The aim of the institution is to give to the student a thorough knowledge of the methods of illustrating for reproduction in the newspaper and magazines. This will be a home concern, offering the same advantages as schools of art in distant cities.

Exhibitions of the work will be held from time to time, and prizes will be awarded. Mort M. Burger is the director and N.D. Boniel assistant director. 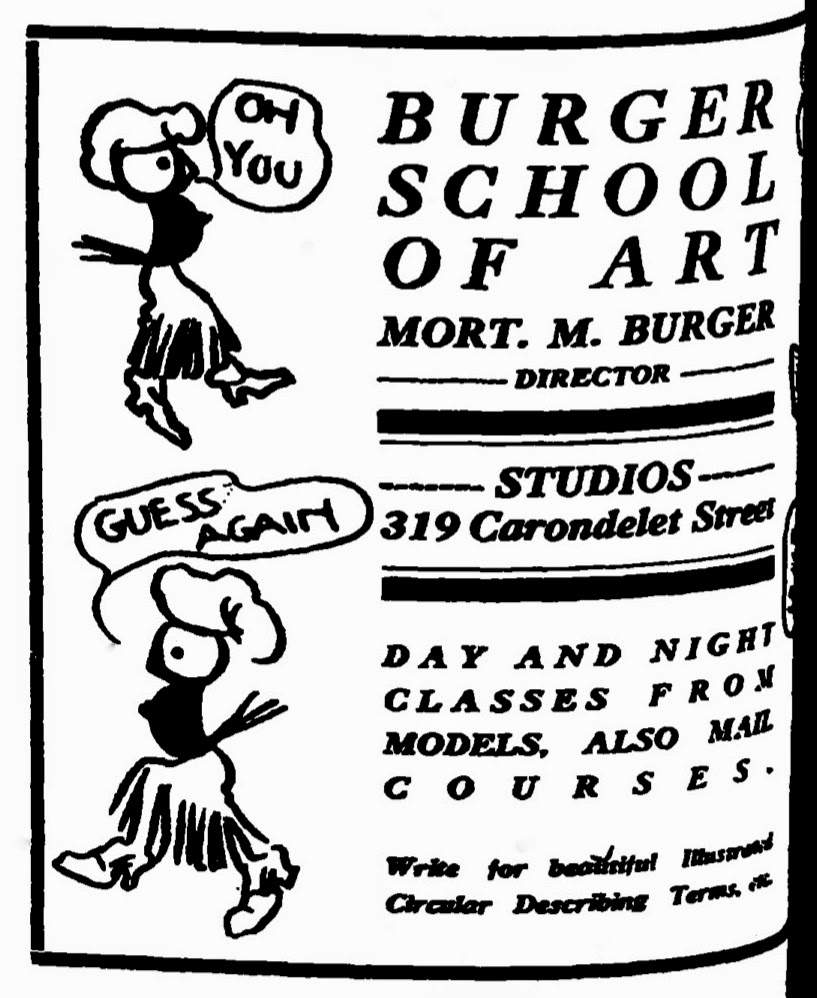 In the 1910 and 1911 city directories, listed Burger as director of the Burger School of Art, 317 Carondelet. He still resided at the hotel.

In the 1910 census, Burger was recorded, as Moses, in his father’s household. They lived in Manhattan, New York City at 2527 Seventh Avenue. Burger was a newspaper cartoonist. He was listed as Mortimer, in the 1915 New York State Census, at his father’s residence, 167 West 146 Street in Manhattan.

Burger turned to vaudeville as reported in the New York Dramatic Mirror, December 31, 1913:


Mort. M. Burger, the comic artist whose work has appeared in the foremost newspapers of America, is entering vaudeville in a cartoon act.

The action is built about an artist and his model. Mr. Burger will be supported by Elsa Howard, formerly with the Aborn opera company.


Mort M. Burger presented his novelty cartoon act in New Britain last week. The act was well received, according to reports. Mr. Burger is assisted by Elsie Howard in poses and songs.


Mort M. Burger, cartoonist, assisted by Elsa Howard, the singing model. To pass judgment on the first performance would not do the act justice as almost everything went wrong. Eleven minutes, in three.

On September 12, 1918, Burger signed his World War I draft card, parts of which are illegible. He worked for a company based in South Amboy, New Jersey.

Burger was involved in a new service, Telephotography, according to the Fourth Estate, April 19, 1919, and Advertising and Selling, May 10, 1919:

Another means of eliminating time is an invention of Le Roy J. Leishman of Ogden, Utah. By the use of this new device a picture can be drawn in New York and reproduced by wire, at the rate of 186,000 miles per second, in San Francisco — or between any other two points where this electrical apparatus is installed.

As a result of the experiments made with this invention, the Leishman Telegraphed Picture Service has been organized. This company is establishing zone centres in thirty large cities, where artists will be in charge to illustrate big events and instantly wire them to newspapers using the service.

Mort M. Burger, an experienced newspaper man, is in charge of the New York office, which has been established in the Flatiron building, and active operations will begin about June 1.

Burger, his parents and brother, Gustave, lived at 53 Adrian Avenue in Manhattan according to the 1920 census, which had his name as “Morton M”. Burger was head of a “correspondence office.”

The North Platte Semi-Weekly Tribune (Nebraska), August 6, 1920, published a photograph of Burger’s students, wounded veterans, at a life drawing session. I believe Burger is the one who is standing. 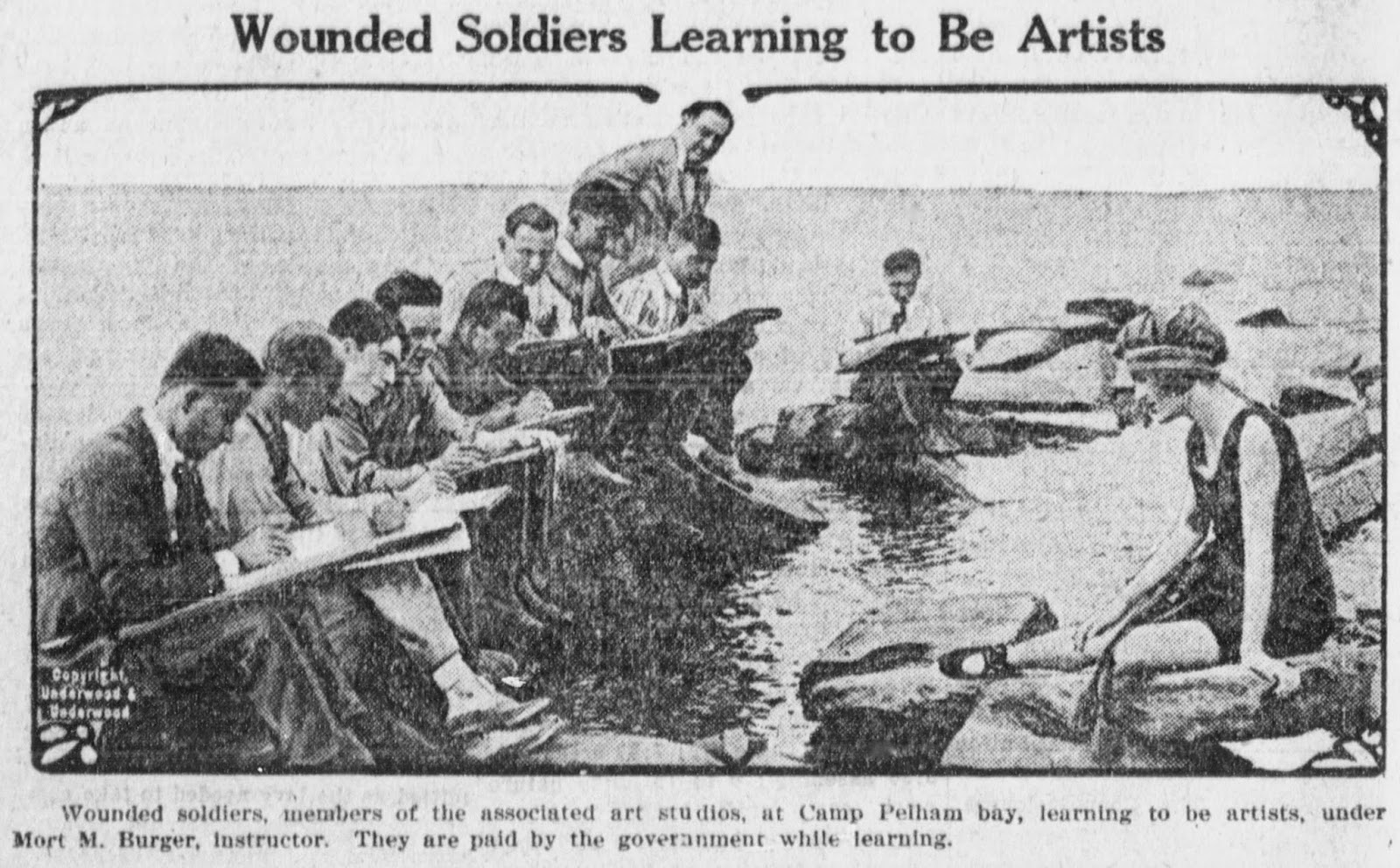 Mortimer M. Burger of New York and Purling, one of the owners of the Columbian Hotel, Purling, was almost instantly killed in an automobile accident near Rifton, a few miles below Kingston, last Friday evening. Two other members of his party—Walter Kaufman and Ira Wulf—also died soon after from injuries received. Mr. Burger was thirty-eight years old, a member of Catskill Lodge of Elks, and was on his way to Purling for the Labor Day holiday when the accident took place. He was driving a new Paige car. When Philip Miller attempted to pass in his Cadillac. The machines came together at the foot of a hill, it being said that each was going about fifty miles an hour. The impact threw the Cadillac to the side of the road, tearing up a piece of concrete. The machine bounded back onto the highway, hitting the Paige full in the back and diverting its course, the vehicle going head-on into a tree, while the other automobile smashed into a telegraph pole and turned over several times. Both machines were badly damaged, the Paige being rendered practically useless.

In the car with Mr. Miller, who was on his way to his camp at Tannersville, were Benjamin Burnett of Brooklyn and William Musken of New York. All were more or less injured and were hurried to the Kingston City Hospital. Large crowds soon gathered at the scene of the accident, and the general opinion was that both drivers were exceeding the speed limit, they having chosen a dangerous part of the road to try out their machines, Thompson Hill being steep and long.

Who was to blame is merely conjecture, but with two automobiles traveling in the same direction it would seem that the man behind should take plenty of room in endeavoring to pass a car ahead unless he has plenty of room to insure a safe and sane passage. These accidents are regrettable, when it is considered that a minute or two in time would undoubtedly have saved the lives of three men and kept harmless as many more.

Here are the first two paragraphs of the article in the Stamford Mirror-Recorder (New York), September 3, 1924:


A taunt, followed by a thrilling race between two cars, a Paige and a Cadillac, ended in a horrible tragedy near St. Remy, about four miles south of Kingston, Friday evening, in which three men were killed and three others were sent to Kingston hospitals. The dead are:

Mortimer M. Burger, 38, of No. 949 Broadway, New York, driver of the Paige, who was killed instantly. He was a member of the firm of N. Burger & Sons, proprietors of the Columbian Hotel at Purling, N. Y. He was on his way to spend Labor Day at the Purling resort.