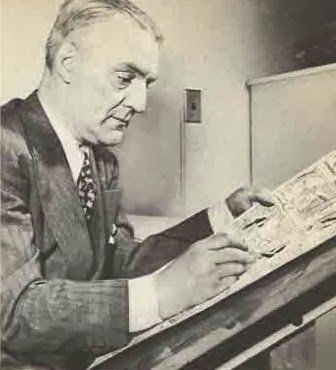 Clarence David Russell was born in Buffalo, New York on August 19, 1896, according to his World War I and II draft cards. The same birthdate was recorded in U.S. Veterans Gravesites, ca.1775-2006 at Ancestry.com.

In the 1900 U.S. Federal Census, he was the first of two children born to Hamilton and Elizabeth. They lived in Buffalo at 43 East Balcom Street. His father was a bookkeeper.

In the next census, the Russells remained in Buffalo, but at 143 North Pearl. Russell’s father was a claims agent. Their address was the same in the 1915 New York State Census.

The Buffalo Evening News, June 24, 1915, said Russell graduated from Lafayette High School that evening. According to Russell’s obituary in the New York Times, October 25, 1963, he studied at the Chicago Art Institute.

Russell signed his World War I draft card on June 5, 1918. He resided at 136 West 16th Street, Manhattan, New York City. He worked for the Western Electric Company, and named his father as his nearest relative. His description was medium height, slender build with blue eyes and light brown hair. History of Buffalo and Erie County, 1914-1919 (1920) had this entry: “Russell, Clarence D.—1st-class Pvt., Co. F, 11th USM.”

The Western Electric News published one of his cartoons in its August 1918 issue. 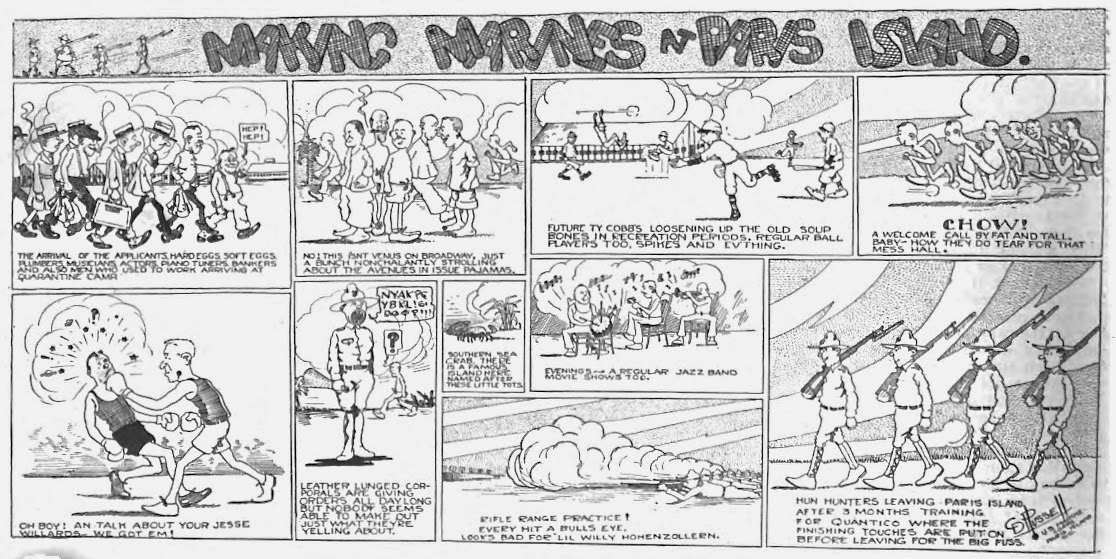 The Buffalo Courier-Express, October 23, 1918, noted Russell’s achievement as a cartoonist.


Buffalo Boy’s Cartoons Make Hit with MarinesCorporal Clarence D. Russell, 143 North Pearl street, is making a reputation for himself as a cartoonist in the Marine corps. He enlisted in this branch of the service last May and after a short period of training at Paris Island, was sent to the camp at Quantico where he soon be came associated with the Marines’ newspaper, The Leatherneck.

A short time ago Corporal Russell was ordered to France. Before he sailed he sketched the officers and some of the rookies in the camp and these pen pictures will be distributed in a booklet to be published by the Marines. He will remain a member of the staff of The Leatherneck while “over there.”
“Russell will be part of the outfit which will compile a daily history of the regiment under the supervision of Colonel Van Ordence and Captain John H. Craige, intelligence officer,” says The Leatherneck in a recent issue.

Russell is a graduate of the Lafayette high school with the class of 1915.

The American Review of Reviews, November 1918, reprinted one of his Leatherneck cartoons. 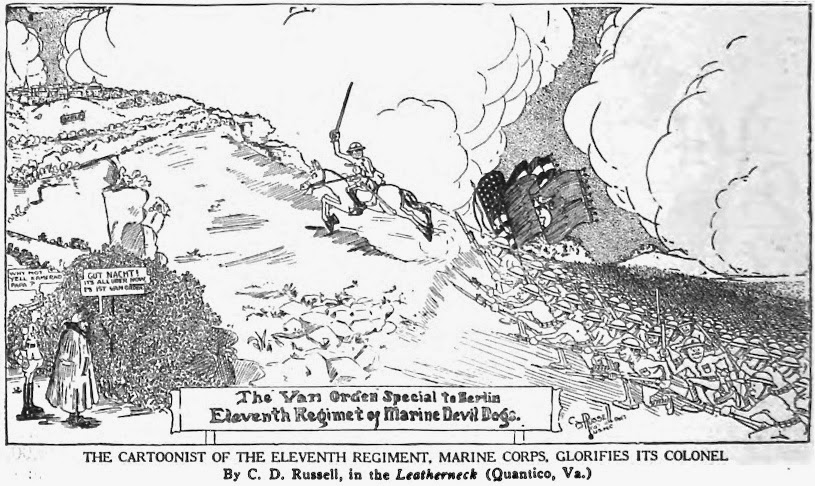 
Word has been received by Mr. and Mrs. Hamilton Russell of the safe arrival of their son, Corporal Clarence D. Russell, who embarked will the Intelligence Staff of the 11th regiment, U.S.M.C.

Russell has not been found in the 1920 census. A visit from his mother and sister was reported in the Buffalo Courier Express, January 31, 1922:


Mrs. [sic] Oliver M. Russell left yesterday for New York where she will join her mother, Mrs. Hamilton Russell who has been there for a fortnight visiting her son, Clarence D. Russell.

In 1924 Russell produced cartoon advertisements titled Electrified History for Western Electric. According to Famous Artists & Writers (1949), "…in the early Twenties [he] worked for the old New York Evening Post and Evening Mail….Russell's professional interest in tramps began around 1927…'I began drawing tramps for Judge, the old humorous magazine…and pretty soon Pete [the Tramp] began to evolve…." (The entire profile is here.)

The New York, New York, Marriage Indexes at Ancestry.com said Russell married Ruthelma Stevens on April 27, 1925. She was an actress. According to the 1925 New York state Census, they resided at 15 Sheridan Square in New York City. Their marriage ended in divorce and both remarried.

Russell has not been found in the 1930 census. Famous Artists & Writers said, “He signed a contract with King Features in 1930.” According to E. Simms Campbell’s obituary in the New York Times, January 29, 1971: “…C.D. Russell, creator of ‘Pete, the Tramp,’ encouraged and advised him….”

According to American Newspaper Comics (2012), Russell’s strip Pete the Tramp, began on January 10, 1932. Snorky was one of three toppers he used on Pete the Tramp.

I suppose they don’t really, but comic artists give me the impression that they lead cheerful, irresponsible lives. C. D. Russell, who inks out a handsome living drawing scape-grace dogs and tramps, conducts a household at Brewster, a suburb, which is overrun with dogs. Russell has six at the moment, collies and pointers of excessively friendly and roistering dispositions. Oddly enough, he has no small Sealyham such as his cartoon character.


Mr. and Mrs. C. D. Russell, have rented the home of Dr. and Mrs. Jewitt in Kent, “Stonywold.” Mr. and Mrs. Russell have lived here for about one year, coming from New York city. Mr. Russell is a “cartoonist” in the Daily Mirror.

A 1937 issue of the Judge printed instructions for Russell’s word game.


Before the paper and pencils are put back in the desk drawer, a neat game for groups of two, three or four is “Letter-Go,” an invention of cartoonist C.D. Russell, who is also the inventor of Pete the Tramp. Each player rules off, free-hand, a box containing twenty- five squares. This is done by making six horizontal lines about a half inch apart and crossing them with six more half inch apart vertical lines. The players then take turns in calling out letters. Each letter, as it is called, must be placed by each player in any one of his twenty-five squares, and no erasing either. The object is to make words horizontally and vertically. When all the squares have been filled in, papers are exchanged and scores totaled. A five-letter word counts 10, a four-letter word 5 and a three-letter word 2. Two-letter words don't count at all. Neither do proper names nor foreign words. Also, adding an “s” on the end of a singular word to make it into a plural is just a waste of time. Your opponents will only allow you the singular. A perfect score is 100 — five five-letter words each way. But in stiff competition you should be able to pick up the marbles with anything in the neighborhood of 70.

Russell has not yet been found in the 1940 census. Russell signed his World War II draft card on April 27, 1942. He lived in Atlantic City, New Jersey, and was a cartoonist for King Features. His description was 5 feet 8 inches and 165 pounds, with blue eyes and gray hair. 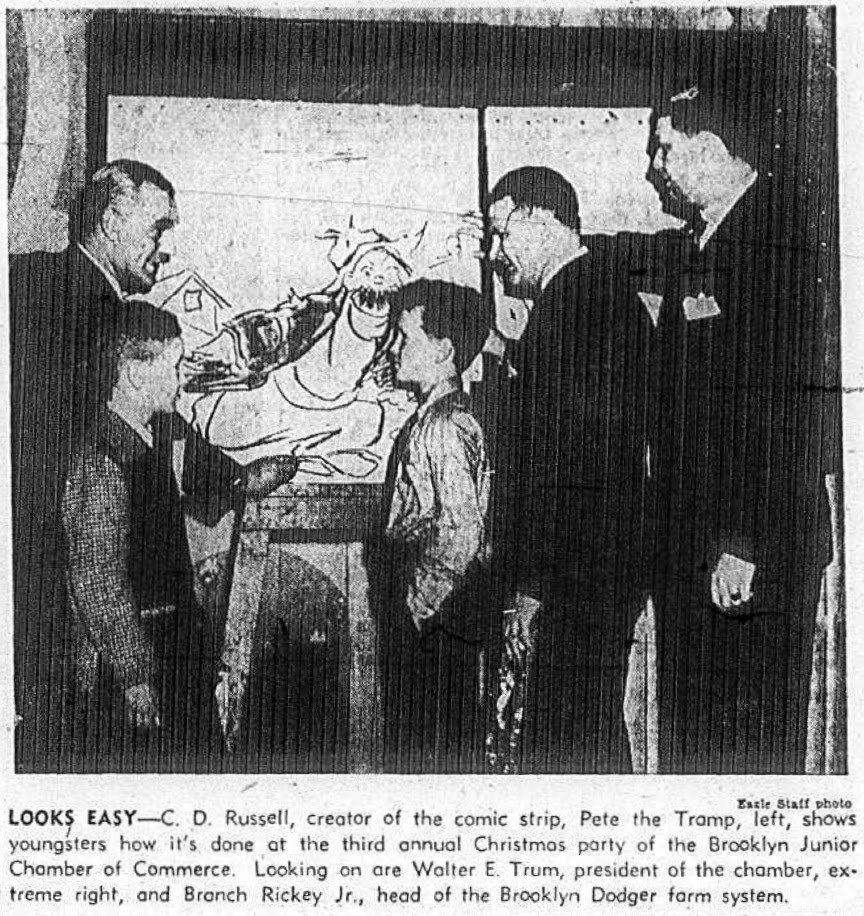 Russell was involved in the founding of the National Cartoonist Society in 1946.

When the Buffalo Courier, December 31, 1962, noted the death of Russell’s sister, he was living in Fort Lee, New Jersey.

Russell passed away October 22, 1963, according to the New York Times: “…[Russell] died of cancer Tuesday [October 22] in Kingsbridge Veterans Hospital, the Bronx. He was 67 years old and lived in Fort Lee, N.J.” However the date on his headstone is October 23. He was buried at Long Island National Cemetery in Farmingdale, New York.

Pete the Tramp ended December 12, 1963. A list of his comic book credits is at the Grand Comics Database.