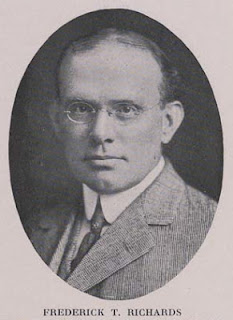 Frederick Thompson “Fred” Richards was born in Philadelphia, Pennsylvania, on May 27, 1864, according to Who’s Who in New York City and State (1905). In the 1870 U.S. Federal Census, he was the second of three children born to David and Janet They resided in Philadelphia.

The 1880 census recorded the Richards family in Philadelphia at 1708 North Eighteenth Street. His father was involved in wholesale dry goods.

According to Who’s Who, Richards was a pupil of the Pennsylvania Academy of Fine Arts, and studied with Thomas Eakins and Edmund B. Bensell. The 1885 Philadelphia City Directory listed him as an artist at 524 Walnut, and his residence at 1626 Jefferson; the same information was found in the 1886, 1889 and 1890 directories. Who’s Who said he married Odile A.S. Hudry on October 21, 1890, in Philadelphia. At some point they moved to New York City where he joined the staff of Life magazine in 1899.

In the 1900 census, Richards, his French-born wife, and their daughter lived in Manhattan, New York City at 144 West 13th Street. His occupation was artist. Who’s Who said his work was exhibited at the Paris Exposition 1900. The New York Times, July 9, 1921, said he was cartoonist for the New York Herald in 1901 and 1902.

In 1901 Richards was involved with two books: The Idiot at Home Three Other Farces was co-authored with John Kendrick Bangs and published by Harper Brothers; and The Royal Game of Golf, published by R.H. Russell.

In the following census, he remained in Manhattan but at another address, 37 West 22nd Street, where he continued as an artist. Some of his neighbors were artists and illustrators: Frank Bittner, William Lippincott, Bertha Low, George Reevs, and Ada Budell.

His wife passed away October 19, 1912, at Sellersville, Pennsylvania, according to death notices, published October 22, in the New York Herald and Philadelphia Inquirer.

Richards was included in Empire State Notables 1914 which said he was on staff at Life since 1888 and at Collier’s Weekly, and cartooned for the New York Herald and New York Times.

He illustrated and Charles Jay Budd wrote The Blot Book, which they published in 1915. According to American Newspaper Comics (2012) Richards produced, in the late teens, News Item for the Philadelphia North American. 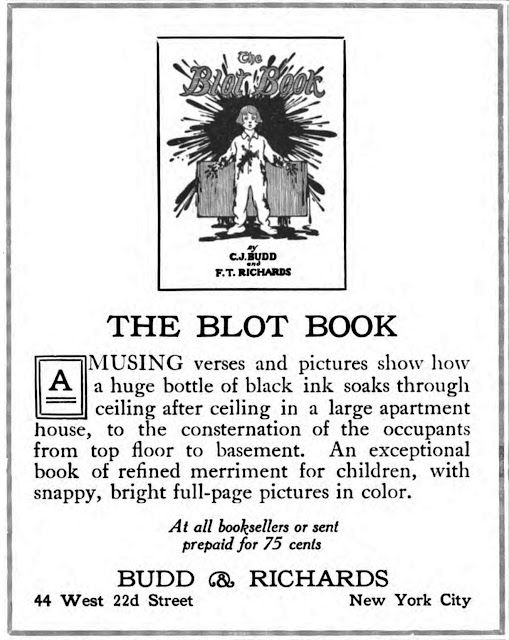 The 1920 census said Richards was the head of the household in Philadelphia at 1815 North 22nd Street. With him was his widow sister, his nephew and his wife, and his niece with her husband and four children.

Richards passed July 8, 1921 in Philadelphia. His death was reported the next day in the New York Times:


Philadelphia, July 8.—Frederick T. Richards, an artist, for the last nine years on the staff of The North American, died at his desk in his home today of heart disease while at work on a drawing. He was born in this city in 1864, but had spent much of his life in New York, having made drawings for Life for twenty years. He had also been cartoonist for The New York Herald in 1901 and 1902, and had done similar work for The New York Times and Evening Mail. He was the author of “Color Prints from Dickens” and “The Blot Book.”

He learned his profession at the Pennsylvania Academy of Fine Arts under Thomas Eakins, and at the Art Students League in New York. He belonged to the Players, Friars and Dutch Treat Clubs in New York.