Paul Moore discovered these interesting news stories about Robert S. Grable, head of World Color Printing. There is some interesting new information here (new to me anyway). I'll discuss that at the bottom of the post.

All of the following stories are from St. Petersburg (FL) papers, which wrote them because Grable was a prominent snowbird in that community.

Thanks so much to Paul Moore for these!


Merchants of the United States are realizing the favorable psychological effect that color exerts on their customers, according to Robert S. Grable, president of the World Color Printing company of St. Louis. 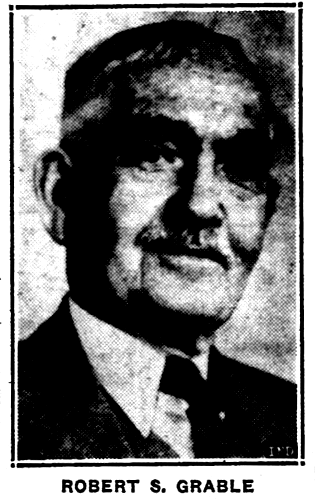 Grable's concern In St. Louis prints colored comics, advertising sections, feature pages, etc., for newspapers all over the world which cannot afford the expensive equipment necessary in this type of work. He is visiting here with friends at 315 Eighth avenue north.

"Color enables a newspaper or magazine to reach a greater number of readers, consequently benefitting the merchants who advertise," he said.

Color Attracts
A certain percentage of readers will read black and white printed matter regularly, but when color is added the colored portion will attract a larger number of readers because it stands out from the mass about it, Grable has found.

Many Install Own Plants
Printing of ready-made colored comic sections formerly composed 95 percent of his concern's business. Now It is only 5 per cent, because many papers have installed their own color printing equipment.

However, Grable had been keeping up with the times, and found something new in the color printing line to keep his concern going.

Grable started out in business as a newsboy, selling papers on the street. He later became circulation manager of the St.Louis Star, and then climbed the ladder of success on higher.

The Comic Families
The World Color Printing company was at first a branch of the St Louis Star, but when that paper was sold some years ago the color printing company was kept separate, with Grable as its manager. He later bought out other interests.

The concern prints such comics as Slim Jim, the Kelly Kids, etc., and through a working arrangement with the Bell syndicate prints Tailspin Tommy, Mutt and Jeff, the Nebbs, Don Winslow, High Lights of History, Keeping Up With the Joneses, and others. 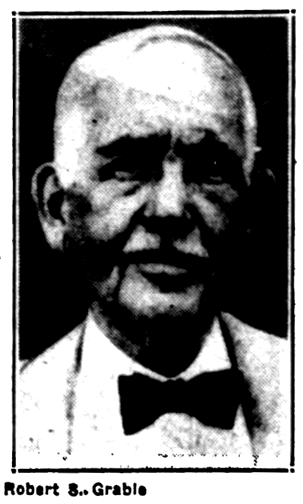 Owner of the World Color Printing company In St. Louis, Mo., Grable pioneered first in ready-printed color comic strips for the Sunday newspaper supplements and when later most newspapers installed their own presses for their "funny papers," stepped out among the first to publish such pulps as "The Green Hornet" "Zip" and "Suspense."

Comic books, of which there are about 130 in the field, have a monthly circulation of 50,000,000, Grable says, and seem definitely to have become a part of the American scene, if not the national literature.

The World Color Printing company puts out some 25 different comic books with a detective number, accounting the trials of "Archie", taking a first place position with a circulation of 1,000,000 copies.

History of the comic books only dates back to the late thirties, according to Grable. It was in 1938-1939 that his company put in new buildings and equipment to take care of the new field in comic literature. The publishing house also prints eight or nine "more dignified" monthlies, he adds.

Publisher Grable – “spelled just like 'Betty's last name” is a cousin of the famous actress and admits that new acquaintances invariably end up talking to him about the Hollywood star rather than the comic book business.

Grable and his wife are wintering in Clearwater and were here yesterday to see Grable's old friend, James Wright Brown of Editor and Publisher.

Clearwater - Mr. and Mrs. Robert S. Grable, winter residents for the past quarter century from St. Louis, Mo., are celebrating their 64th wedding anniversary today. They were married in Louisville, Ky., Feb. 12, 1891. He is now 86 and she is 81. 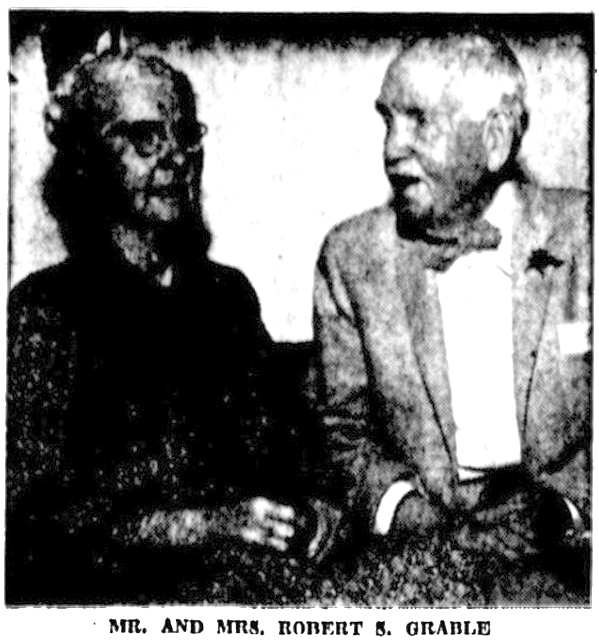 On Sunday they will further mark the occasion with a dinner party at their home, 1336 Sunset Dr., for a group of relatives in the area and a few close friends. Appointments of the table will be enhanced by an anniversary cake centerpiece and arrangements of spring flowers.

KIN OF BETTY GRABLE
In addition to relatives well-known in the up-county area, Grable and the late Tom Grable, father of the world-famous Betty Grable, were first cousins.

Most noteworthy, in addition to 64 years of married life, is Grable’s active business life. He is by no means retired. As owner-director of World Color Printing Co., he even directs the operations of his firm by long-distance telephone during his three months in Florida each year.

He began his business career as circulation manager for the St. Louis Star. He was a charter member of the National Circulation Managers Assn. in 1899 and is now one of the few living charter members.

COLOR PRINTING
In the early 1900s he founded World Color Printing which supplied more than 80 per cent of the newspapers in the nation with colored comic supplements for their Sunday editions. Among these was the St. Petersburg Independent a few years after the turn of the century. He recalls that the Miami Herald used 10,000 comic sections in 1904 and now uses 600,000.

With a Philadelphia editor who wanted comics with the text in German, he originated the first foreign language comic sections after 1910. After World War I this service was taken over by Hearst publications.

INVISIBLE COLOR
In 192[number obscured] he also originated the invisible color book used as a tabloid section in a number of large papers in the East and Midwest. In this the black and white printing, treated with water, emerged in full color – a very popular operation with the small fry of the day.

When newspapers started printing their own “funnies” or consolidated with other papers on this feature, World Color Printing went into comic book publication and now prints 1,300,000 every day. However, the company still does the comics and the tabloid TV guide for the St. Louis Post-Dispatch.

Grable’s company also prints Billboard, Sporting News, the Army, Navy and Air Force Times, and a number of other magazines.

Clearwater -- The chairman of a syndicate which supplied The St. Petersburg Times with comics in 1903-1904 is celebrating his 64th wedding anniversary today. 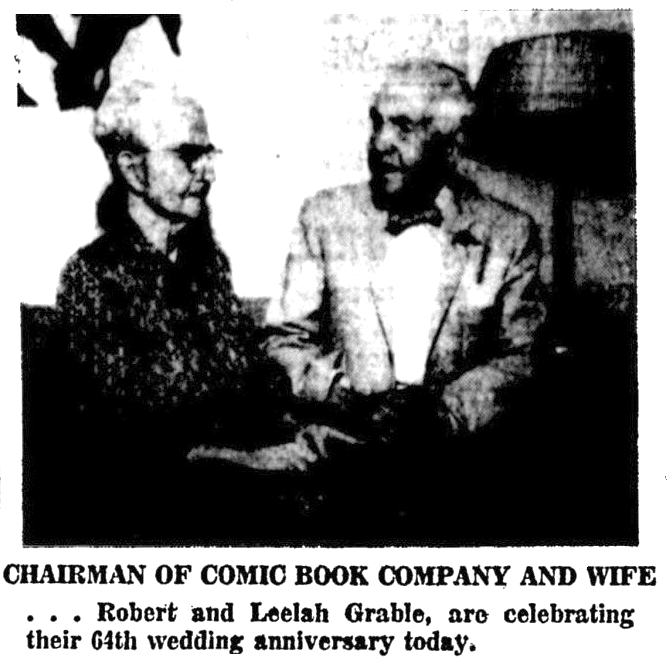 Robert Grable, 86, and his wife Leelah, 81, 1732 Sunset Drive, Clearwater, met a a Louisville, Ky., Sunday school February 12, 1893. They were married a year later. During the interim, Grable took a train from St. Louis, where he was working, to Louisville every other month to visit his bride-to-be.

"It was love at first sight, though neither of us knew it at the time," Grable said.

"We are optimistic about celebrating our diamond anniversary (the 75th)," Grable said. "The Lord has been good to us."

Practically every newspaper in the United States, Grable pointed out, has been a client of his firm, the World Color Printing Products (sic), St. Louis.

Gable hired comic artists from newspapers, and sold their services to other newspapers which could not afford artists of their own. Rube Goldberg and George Harriman (sic) were among the people Grable employed.

No longer in the newspaper comic business, it is now the largest printer of comic books in the country, Grable explained. Among its publications are Dagwood, Mr. District Attorney and Casper.

The Grables have been coming to Clearwater for the winter for the past 25 years.


~ ~ ~ ~ ~ ~ ~ ~ ~ ~ ~
So, what new information is here? First, I had no idea that World Color took refuge in the comic book printing business when their Sunday sections became unprofitable. I was under the impression that printing of The Sporting News was their main source of income later on -- obviously that wasn't the case. Apparently I'm slow on the uptake in this regard, as the Wiki entry on World Color Printing covers this aspect of their business.

Second, I was not aware that WCP had some sort of business arrangement with Bell Syndicate in the late 1930s (2/13/37 article). Was Bell offering pre-printed sections that featured just their comics? Come to think of it, the way these strips were presented in the 1930s, I do recall that you sometimes see them printed on a singularly rough quality of pulp paper, cut slightly larger size than normal -- is that evidence of World Color pre-printing? Does anyone else share this idea, or am I making up facts to fit a conclusion?

Third, I wonder about the mention of a German language comic section from WCP in 1910 or so. The idea that it was the first of its kind would seem to be false on the face of it, since Hearst's German language section was available long before that. However, maybe Grable is saying that he was producing a German section of original material? In any case, I've never seen a WCP section printed in German. Have you?

Fourth, it's nice to know that WCP still kept one toe in the newspaper comics world, printing the St. Louis Post-Dispatch comic section even in the late 1950s.

The date of the INVISIBLE COLOR was 1922. The Washington Evening Star carried this Sunday feature from May/28/1922 through Jul/16. It probably began elsewhere at least as early as Mar/26. Seems to have been very short lived.

Hi Bob --
Thanks for reminding me of the Invisible Color sections. Always meant to look a bit deeper into their history, and you gave me the push I needed. Found enough interesting bits that I am working on a blog post about it. Look for it to appear here sometime in March.

My father worked for world color from the fifties til his retirement in mid 80s. In 1977 they produced a comic book featuring him giving a tour of the plant showing how comics were printed. Various super heroes were working in the plant in the book. I remember him driving to the airport late every wednesday night to get the plates for the sporting news which I think came out friday. He was transferred to New York in the 60s to open an office there