Gustav Erhard Rudolph Michelson was born in Riga, Latvia, on February 4, 1884. His full name and birth information were found on his World War I and II draft cards and naturalization petition at Ancestry.com. According to the U.S. Federal Censuses, his family emigrated in 1893 and resided near Boston. There is no record of him residing in California. Coincidentally, there was an Eric Gustavus Michelson* (1893–1977) who was born in Boston. He was a designer who moved to California around 1919. Eric G. Michelson was confused with Gustav E.R. Michelson in the book, Artists in California, 1786-1940: L-Z (2002).

In the 1900 U.S. Federal Census, Michelson was the youngest of three sons born to John, a wood carver, and Louisa. The enumerator spelled the family name “Michaelson”. They lived in Arlington, Massachusetts (near Boston) at 301 Massachusetts Avenue. The New York Times, March 8, 1964, said Michelson attended the Boston Latin School. He may have submitted a drawing to the children’s periodical, St. Nicholas, October 1901.

A 1904 Arlington city directory listed Michelson as an artist boarding at 299 Massachusetts Avenue. In the same year, a Boston directory listing had artist Michelson at 76 Summer. He worked in the editorial department, presumably of a newspaper, at 268 Washington, according to the 1905 Boston directory. The Times said he was with the Boston American.

On June 27, 1906, Michelson married Cora Louise Hull in Somerville, Massachusetts, according to a Massachusetts marriage record at Ancestry.com. The 1907 Somerville directory said their address was 110 Boston Avenue. Before the end of the decade, Michelson was a staff artist on The World in New York City; some of his drawings appeared on December 11, 1908; December 17, 1908; December 22, 1908; and December 29, 1908. The World also published his strip Mrs. Neighborly on January 30, 1909 and February 5, 1909.

In 1909 Michelson switched to the Hearst publishing organization. According to American Newspaper Comics, his strip The Wonder Girl’s Diary had a short run from March 11 to May 28 1909.

The 1910 census recorded Michelson and his wife in Brooklyn at 224 88th Street. He was a newspaper artist. The Times said Michelson attended the Art Students League. In the 1915 New York State Census, Michelson had remarried to Kathryn and they had a two-year-old daughter. The family resided in the borough of Queens on Edgewater Place. A 1916 New York city directory listed him in Manhattan at 245 Fort Washington Avenue. 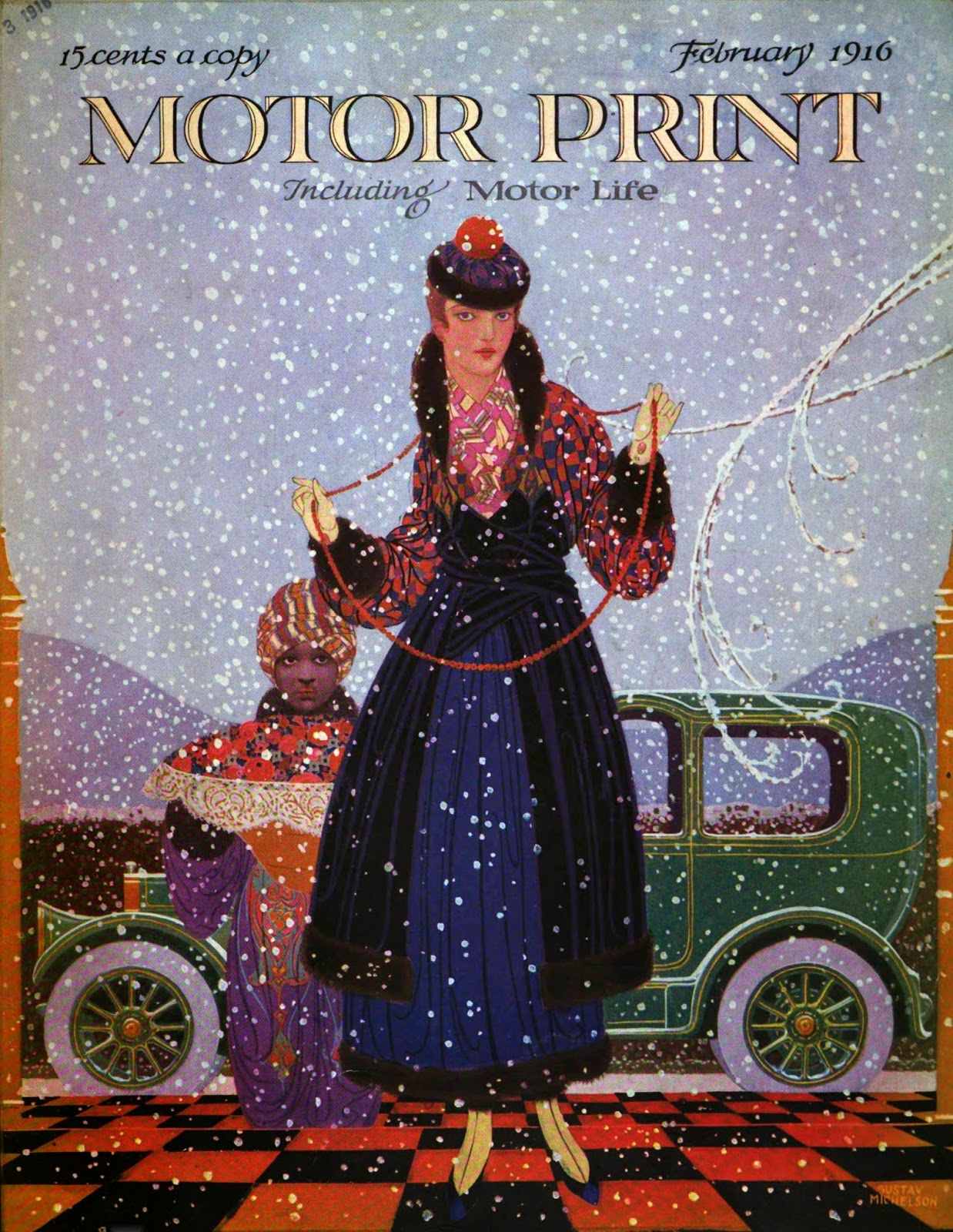 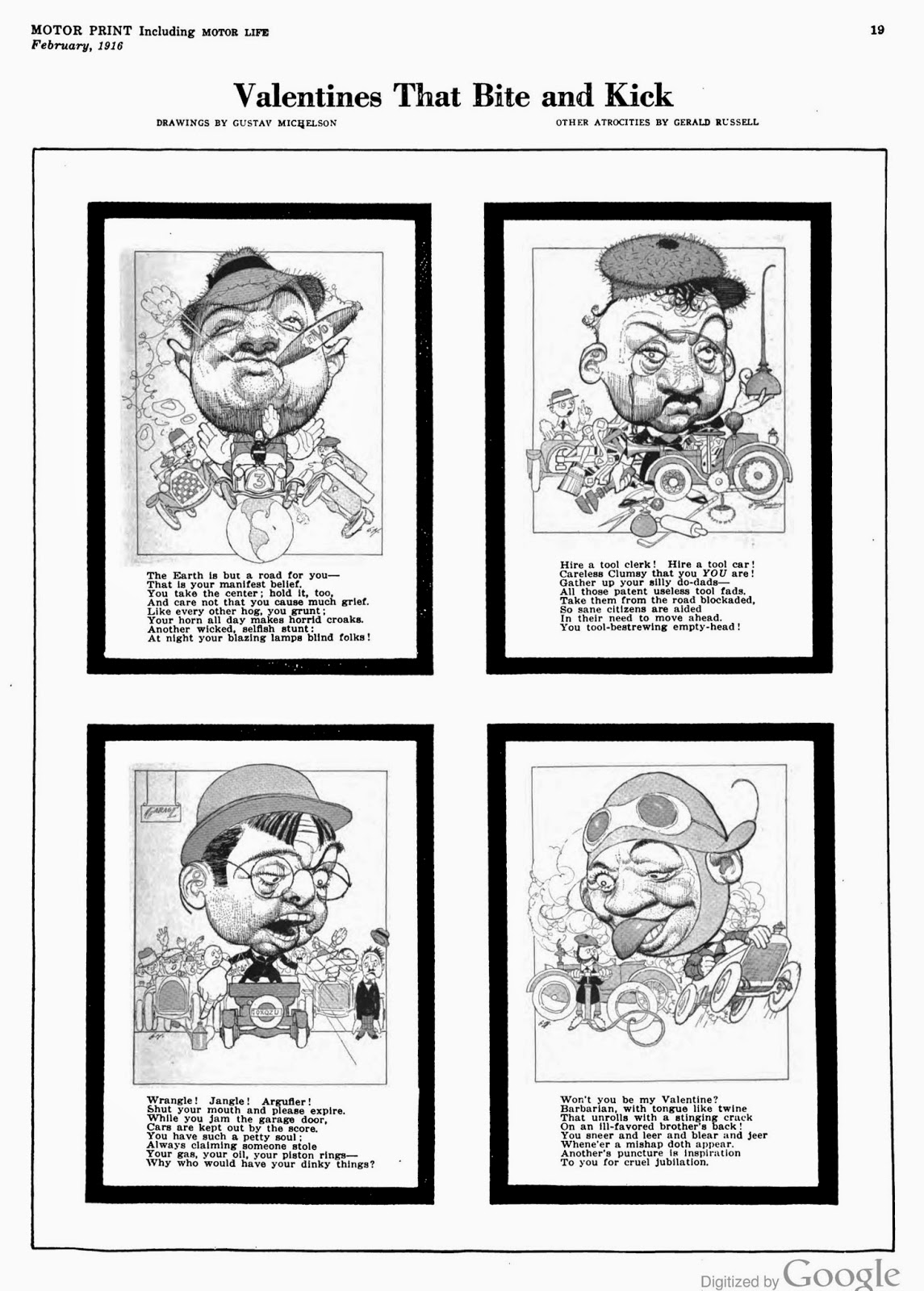 Hearst used Michelson on the covers of Harper’s Bazar (April 1914 and February 1917), and inside Puck magazine, which it bought in 1917.

Michelson illustrated the book Jinks and Betty which was published in 1916.

On December 13, 1917, Michelson became a naturalized citizen. His address was 677 West 204 Street. The same address was on his World War I draft card which he signed on September 9, 1918. The self-employed artist’s description was medium height and build with gray eyes and brown hair. 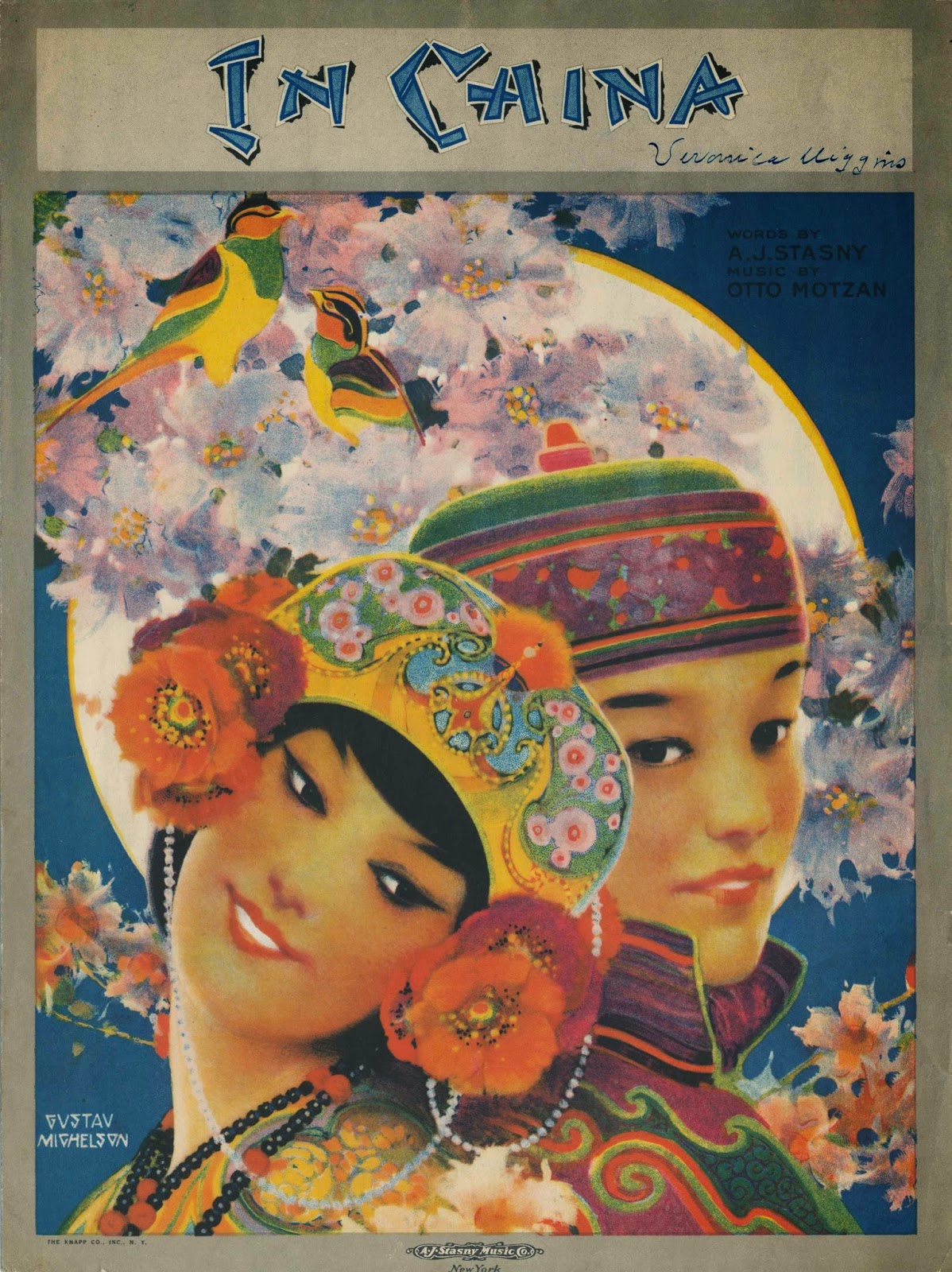 “August E. R. Michelson” was the name recorded in the 1920 census. His wife and three children lived in Queens, New York at 30-32 Gardiner Street. A fourth child was named in the 1925 New York state census. At Ancestry.com, there are Boston city directories, from 1922 to 1930, that list artist “Gustav Michaelson” at “276 E Cottage Dor[chester]”. It’s not clear if this Boston artist was the same New York City artist.

In the 1930 census the family remained in Queens but at a different address, 3634 Gardiner Avenue. Michelson continued as a self-employed artist.

They remained at the same location but the street was renamed Corp Kennedy Street in the 1940 census. The census statistics said he completed two years of high school, and in 1939, worked 26 weeks and earned $1,700. Michelson signed his World War II draft card April 27, 1942.

Michelson passed away March 7, 1964, in Elmhurst, New York. His death was reported in the Times, the next day, and Long Island Star-Journal (Long Island City, New York) on March 9 (below).

A requiem mass for Gustav Michelson, 80, of 160-15 7th avenue, Beechhurst, will he offered in the Roman Catholic Church of St. John and Mary in upstate Chappaqua at 11 A. M. tomorrow.

Burial will be in Gate of Heaven Cemetery, Mount Pleasant, N. Y.

A native of Boston, he was an artist and illustrator. He attended the Boston Latin School and the Art Students League in Manhattan and had been a courtroom artist with the Boston American, the old Morning World and other newspapers.

A cover artist for leading magazines, he had painted posters of movie stars for several major companies.

Retiring as an illustrator 15 years ago, Mr. Michelson continued to he active as a portrait painter.

He is survived by a son, Theodore, and three daughters. Sheila, JoAnn and Kathleen.

The Edward A. Cassidy Funeral Home of Mount Kisco. N. Y., is in charge of arrangements.

Comments:
The April 1914 Harper's Bazaar cover linked near the top is quite wonderful...as is the Motor Print...great learning about 'new' artists. Thanks!

Nice article on a sadly forgotten talent! Gustav Michelson was responsible for a ton of poster and ad art for the Pathe company throughout the 1920s. This included Mack Sennett posters of Harry Langdon, Ben Turpin, Billy Bevan and others; Hal Roach comedies of Stan Laurel, Charley Chase, Our Gang, Harold Lloyd, and more; as well as Paul Terry's Aesop Fables cartoons and more. When signed, most of his art was simply inscribed "M". Some of his prettiest art was for Laurel & Hardy's "Flying Deuces" of 1939.