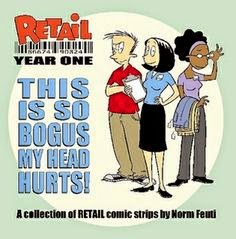 It used to be that the publication of a collection of a current comic strip wasn't a particularly newsworthy event. Until the early 2000s, most any comic strip with a decent fan following was available in reprint form at your local bookstore.

Well, with the slow but steady demise of those local bookstores, and the advent of comic strips archived on their syndicate websites, those collections are becoming rarer and rarer.

Of course, being a troglodyte, me wantum comic strips on paper. So I was delighted to find that one of my favorite current strips, Retail, has been given  the reprint book treatment. Unfortunately, creator Norm Feuti apparently never got the call from Andrews-McMeel, which seems to have less interest in comic strip reprints these days, so he had to publish on his own through POD website Lulu.com.

I wonder in this age how many fans of Retail never actually get to see the strip printed on a newspaper page. I know I haven't. I developed a taste for the strip online, even though I really dislike reading comic strips in that milieu. Feuti's strip about a group of Grumbel's department store employees just seems to hit all the right notes. It is just a bit edgy, but nevertheless warm. There are no heroes and villains in his cast, which would be the easy way to play this game. Everyone at Grumbel's is just trying to make their way; some doing a better job than others, some more likeable than others, but no one is labelled BAD or GOOD. Dilbert, another successful workplace strip, takes the opposite tack and makes it work, but that strip is ultimately hitting the same few notes all the time, whereas Retail endeavors to use the whole keyboard. This approach limits the belly-laugh potential, but it makes you care enough about the characters to want to visit with them every day.

This book collects the first year (2006) of the strip, and works as a superb introduction to an excellent feature. Feuti was still finding his way at the time, but the strip was a good one right out of the gate. Not only is the strip funny, but Feuti's polished art is also a delight. It never calls attention to itself, but the spot-on expressions and body language always serve the gags perfectly.

So ignore, please, the awful hackneyed title of this collection (it really is the only klunky part of the whole package) and give Retail a try. If you've ever worked in retail, and who among us has been lucky enough not to, I think you'll become a fan of the strip.

Comments:
One of my favorite strips. I hope more follows!