Whining, Mostly, plus a Preview of Things to Come 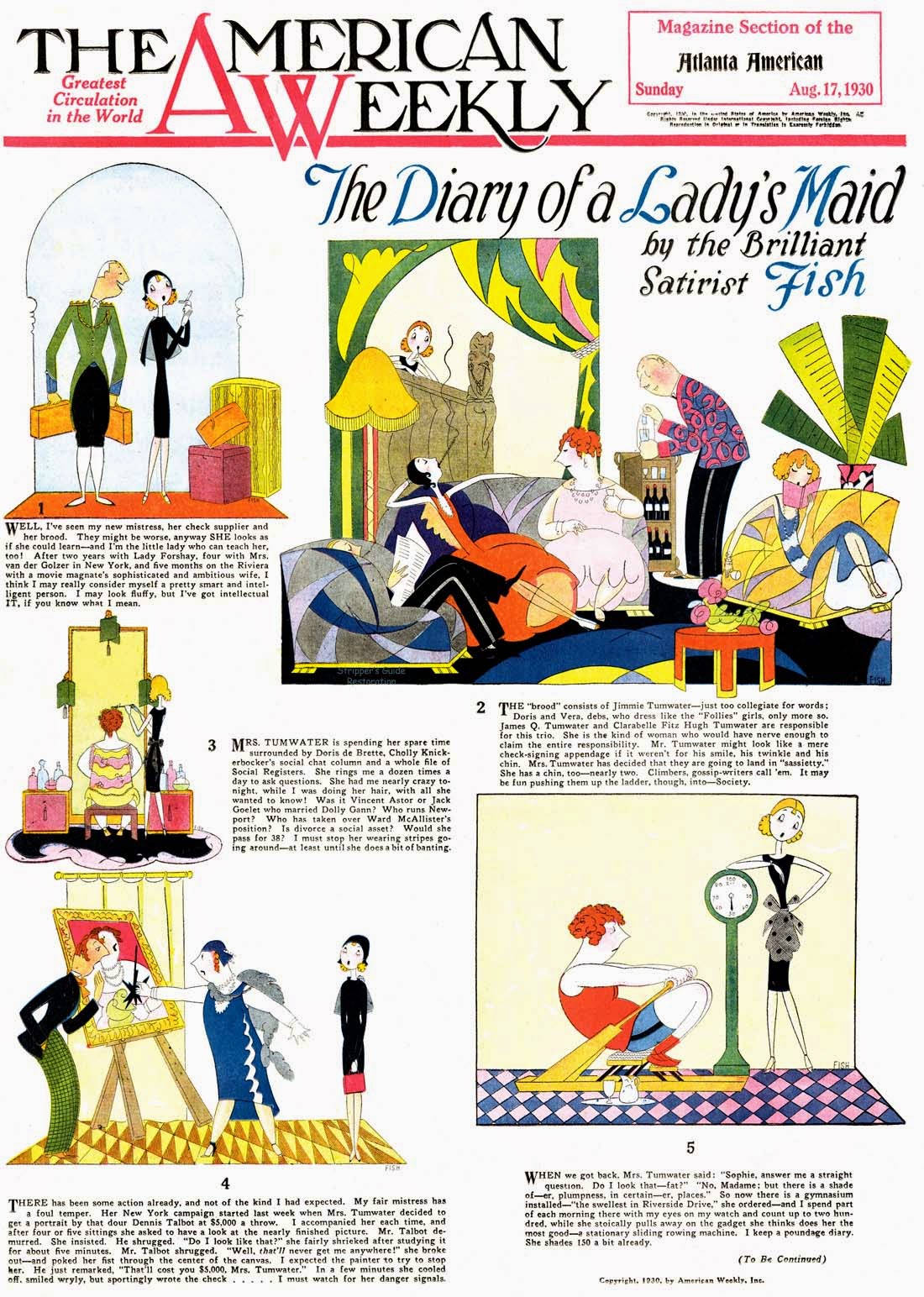 Here's a second look at Fish's The Diary of a Lady's Maid, which we previously covered in this post. Why are we revisiting it? Well, I could tell you that it is such a great series that I decided to restore another example. While it is in fact a darn fine series, the truth is that I restored a second example this morning because I was hurriedly casting about for a post to do, and didn't realize that I'd already covered this series.

I made that mistake because, despite what I hope looks like a smoothly running blog from your perspective, all hell has broken loose behind the scenes. You see, I just returned from a three week trip out of the country. Before leaving, I prepared a month's worth of posts. Three weeks worth for when I would be out of touch, and an extra week's worth to give me time to settle back in on my return.

It seemed like a foolproof plan (me being the fool in question). Unfortunately, when I returned to Casa Holtz, it was to find that my computer had decided that, having been unplugged and on vacation for three weeks, that the rest was insufficient. So the hard drive crashed. Then to add insult to injury, my meticulously careful backups did not work quite as expected, leaving me after several days of swapping drives and backups, with an incomplete restoration with which I am still wrestling*.

Add to that a head cold courtesy of my fellow airplane passengers, and a variety of other non-comics related emergencies around the homestead, and the week of posts that I arranged for ran out entirely too quickly.

Now that you understand that the Stripper's Guide universe is in a temporary shambles, and are no doubt shedding warm empathetic tears on my behalf (you are, aren't you?), here's what I'm gonna do to try and get this train back on the track. Alex Jay has had a group of fine posts in the queue for a long while now, all waiting for me to write complementary posts. Well, those complementary posts ain't gonna happen any time soon, so we're going to unleash Jay's work on you without the questionable benefit of my own blather to go along with them. First we'll have profiles of the cartoonists that worked on one of the first 'family sitcom' strips, Doings of the Duffs. After that we may continue with a group of posts about Dr. Guy Bennett, which has been sitting in the queue because I could not come up with even a short run of strips to run in an accompanying Obscurity of the Day.

Hopefully by then I'll be able to patch my world back together. Enjoy!


* By the way, I lost the last month's worth of emails in the process. So if I haven't responded to a query that you sent in September-October, try sending it again please.

Comments:
Wonderful stuff! I note a title The First Book of Eve by Fish (on ABEbooks) ... humor from 1916/comic strips it says.... I have not seen it.... and a couple other titles she did decorations for.

(most of these are print-on-demand or ebooks)

On Amazon there is a Third Eve Book, so this was perhaps a strip of hers.

As the book intro says, these 'strips' originally appeared in the British publication The Tatler.

Too bad the color sundays of 'all' of the comics aren't available.....preferably in hard copy.
Thankyou for presenting them like this!