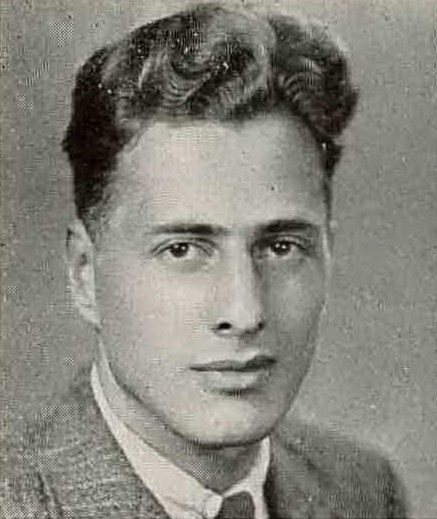 Charles John “Chuck” Mazoujian was born in New Jersey on August 24, 1917. His full name and birth date are from the Social Security Death Index, and his birthplace was recorded on his World War II army enlistment.

In the 1920 U.S. Federal Census, he was the second of three sons born to John and Rosa, both Armenian emigrants. They lived in West Hoboken, New Jersey at 915 Highpoint Avenue. His father was a photo-engraver.

The next census recorded Mazoujian, his parents and younger brother in West New York, New Jersey at 21 20th Street.

Mazoujian was at home with his parents and older brother in the 1940 census.

Who’s Who of American Comic Books 1928–1999 said Mazoujian’s career in comics began at the Eisner and Iger Studio in 1939; the studio was formed in 1936 by Will Eisner and Jerry Iger. When the partnership ended in 1940, Eisner formed his own studio. In an interview in The Art of George Tuska (2005), Eisner said to Dewey Cassell:


...when I left Eisner-Iger, three artists agreed to come with me: Bob Powell, Chuck Mazoujian, and Lou Fine. We opened a studio in Tudor City. And then Nick Viscardi came along, and Dave Berg and Chuck Cuidera.

Cassell: It sounds, at least for those of us looking back on it now, as if that must have been an exciting time to be involved in comics.

Eisner: Well, you know, everybody refers to the period as the Golden Era. For me, it was the Leaden Era. Everybody was working hard. Most of the guys in the shop were working to just make some money so they could go uptown. Chuck Mazoujian was the first guy to leave and he went uptown to become an art director and illustrator and a good painter….Uptown meant going to a major advertising agency….

Before Mazoujian left Eisner, his contribution was Lady Luck which appeared as a backup feature in the Comic Book Section Sunday supplement whose main feature was The Spirit. It debuted June 2, 1940. The Record and Herald News (New Jersey), March 27, 2011 said: “…he created the ‘Lady Luck’ comic originally modeled after his fiancée, then Edna Monson, who wore a stylish green hat.” According to American Newspaper Comics (2012), Mazoujian’s run ended May 11, 1941.

Mazoujian enlisted in the army on January 31, 1941. One year later his engagement to Monson was reported in the Brooklyn Daily Eagle, January 29, 1942:

Miss Monson studied art at Pratt Institute. Mr. Mazoujian, a graduate of Pratt and, before being called into the service, an assistant instructor in evening art classes at that institution, is the originator of the adventure strip, Lady Luck, and is well known in commercial art circles. He is continuing his art work at Fort Hancock. 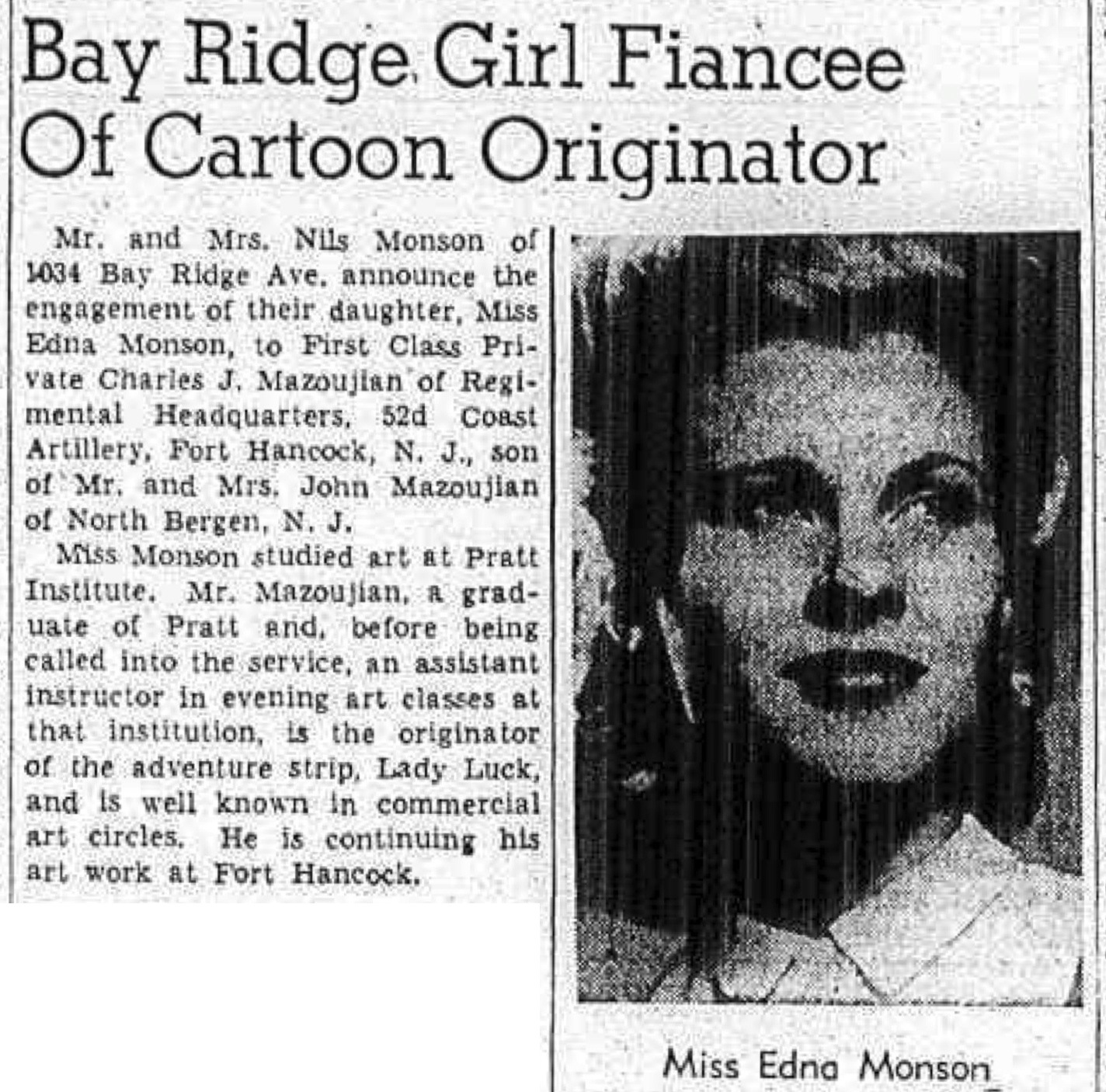 While in the service Mazoujian’s art garnered attention. The New York Sun, January 9, 1942, said he was awarded fifth place in “Life in the Service” exhibition sponsored by the Hobby Guild of America and shown at Bloomingdale’s. The Richmond TImes Dispatch, (Virginia), January 23, 1942, said: “Outstanding among the pencil work is that of Private First Class C.J. Mazoujian, stationed at Fort Hancock, N.J. He depicts Army life on maneuvers in several pieces.” Some of those drawings were featured in Life magazine, February 9, 1942. Nine years later, Mazoujian provided two pencil drawings for Life, December 3, 1951, here and here.

After the war, the Record and Herald News said he returned to Pratt Institute to teach painting and figure drawing evening classes. His freelance illustrations appeared in many books. He was an illustrator for the New York advertising agency, Ogilvy and Mather, in the early 1960s. At some point he retired. His wife passed away October 3, 1992. According to telephone directories at Ancestry.com, during the 1990s Mazoujian lived at 20 Brook Road in Tenafly, New Jersey. Beginning in 2002, he lived with his son, Craig in Tucson, Arizona, then in 2007 with daughter, Gwen in Sacramento, California.

Mazoujian passed away January 14, 2011, in Sacramento, California. His death was reported March 27 in the Record and Herald News. An overview of his career is here, and his comic book credits are here.

Comments:
He also did a terrific spread illustration for Will Eisner at his first editorial war gig, Firepower. So they did join up, even though Chuck had gone into the army earlier.