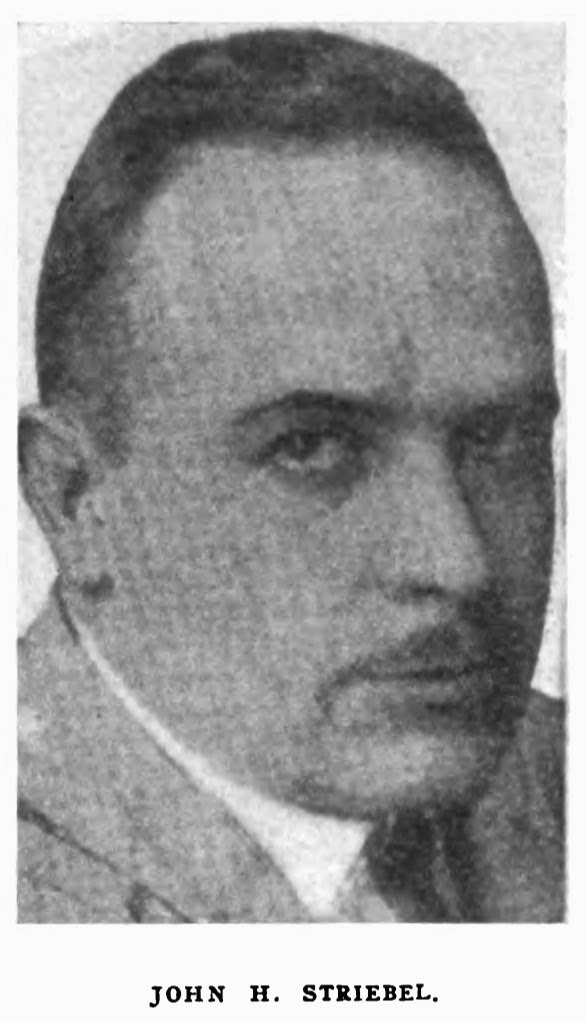 John H. Striebel was born Floyd Henry Striebel in Bertrand, Michigan, on September 14, 1891. His birth name was found in the Bulletin of the University of Notre Dame: General Catalogue 1910–1911, passenger lists and newspapers. His birthplace was named on passenger lists and his obituary in the Kingston Daily Freeman (New York). The birth date is from the Social Security Death Index, and passenger lists. However, his World War I draft card had the year as 1892.

In the 1900 U.S. Federal Census, Floyd Striebel was the oldest of two children born to Henry, a grocery clerk, and Helen. They resided in Portage, Indiana at 556 Burroughs Street. Also in the household were Striebel’s maternal grandparents and two aunts.

The start of Striebel’s career as a cartoonist was told in many newspapers including the Colorado Springs Gazette (Colorado), December 8, 1910:


Quick Change for a Boy

From Human Life.When Charles Kane, who is now sporting editor of the Chicago Examiner, was doing a column of humor a day on the South Bend, Ind. Morning News, one day he chanced to go down to the pressroom and he saw a newsboy drawing a cartoon of the circulator on the newly whitewashed basement walls. Kane took the youngster by the ear upstairs and into the office of the managing editor.

“I won’t do it again, honest…,” protested the frightened lad.

Kane clasped his hand gently over the youngster’s mouth and turned to the astonished man at the roll-top desk. “Here’s the cartoonist the News has been looking for,” said Kane. “You ought to see the picture he just drew of Gussie.”
This rather unconventional introduction of Floyd Striebel to the editor of the South Bend News had two results: the News circulator lost a newsboy, and young Striebel was engaged to draw a page cartoon every day. This was in December 1908, when Striebel was just 16 years of age. The work that the boy has done since that engagement is of a nature to mark him as one of America’s coming cartoonists.

A newspaper cartoonist must have ability in two lines: he must be able to execute an idea; he must be able to get the idea. Young Striebel’s execution is by no means crude, considering that he has had absolutely no artistic schooling. That is what he is now working for, to earn enough money to put himself through the Chicago Art Institute. But he has all of an experienced cartoonist’s grasp of public affairs. He finds no difficulty in conceiving his cartoon ideas.

One night when the News was short a reporter, Striebel was sent out to cover an important police story, which he did with the ability of a veteran newspaper man. His versatility makes him valuable.

The 1910 census recorded the Striebels in South Bend, Indiana at 618 Leland Avenue. At the time of the census, Striebel was a student at the University of Notre Dame, where he contributed to the 1910 yearbook, The Dome. On the Artists and Contributors page it said:


Some of the very best work in the book must be credited to Mr. Floyd Striebel, cartoonist for the South Bend News. That this young man has a remarkable facility for catching expressions is amply evidenced by the caricatures of the Seniors in the back of the book. These pictures, nearly all admirable likenesses, were done with nothing but photographs to work on, and they manifest an unmistakable talent for character-drawing in the artist. 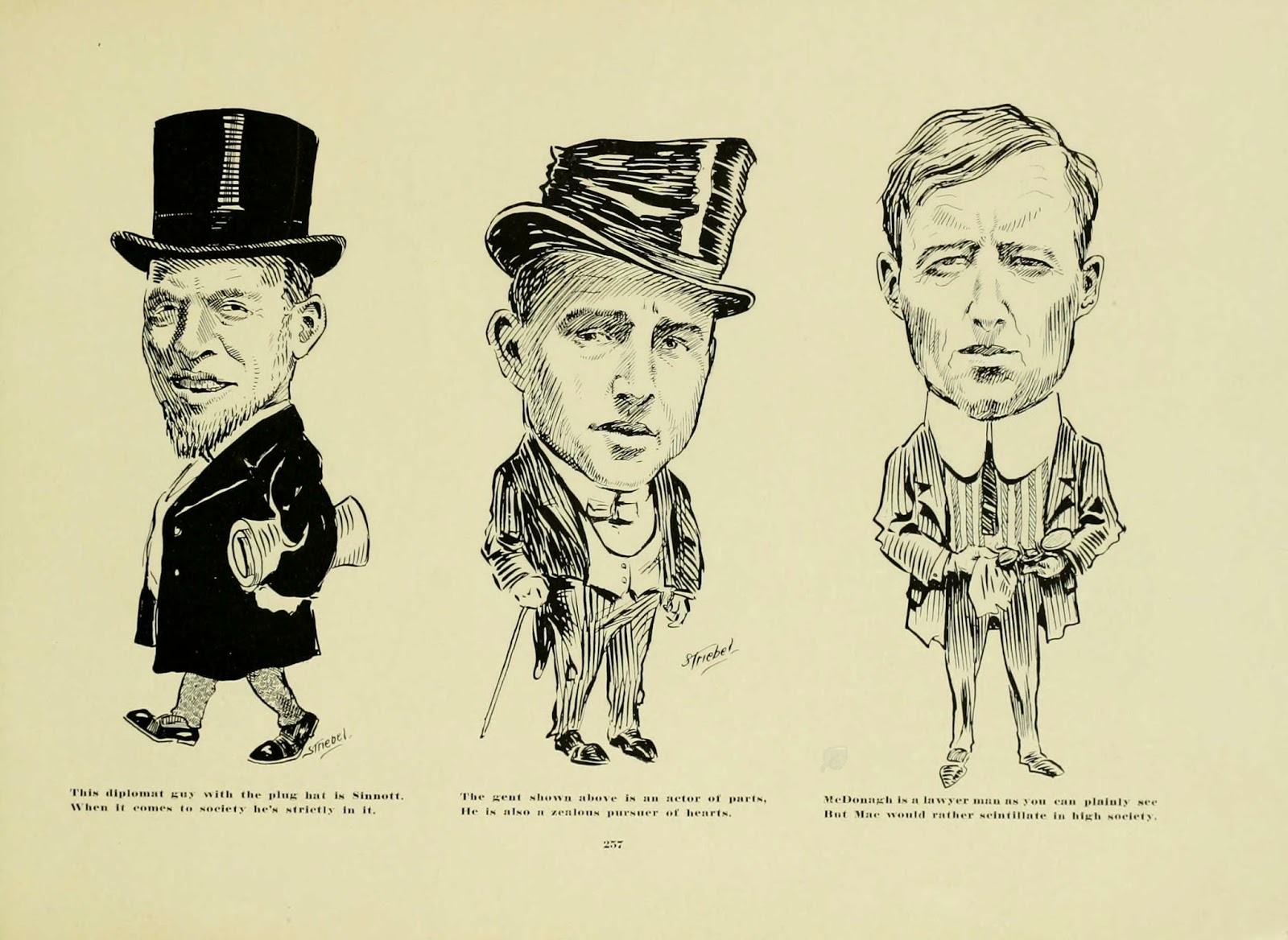 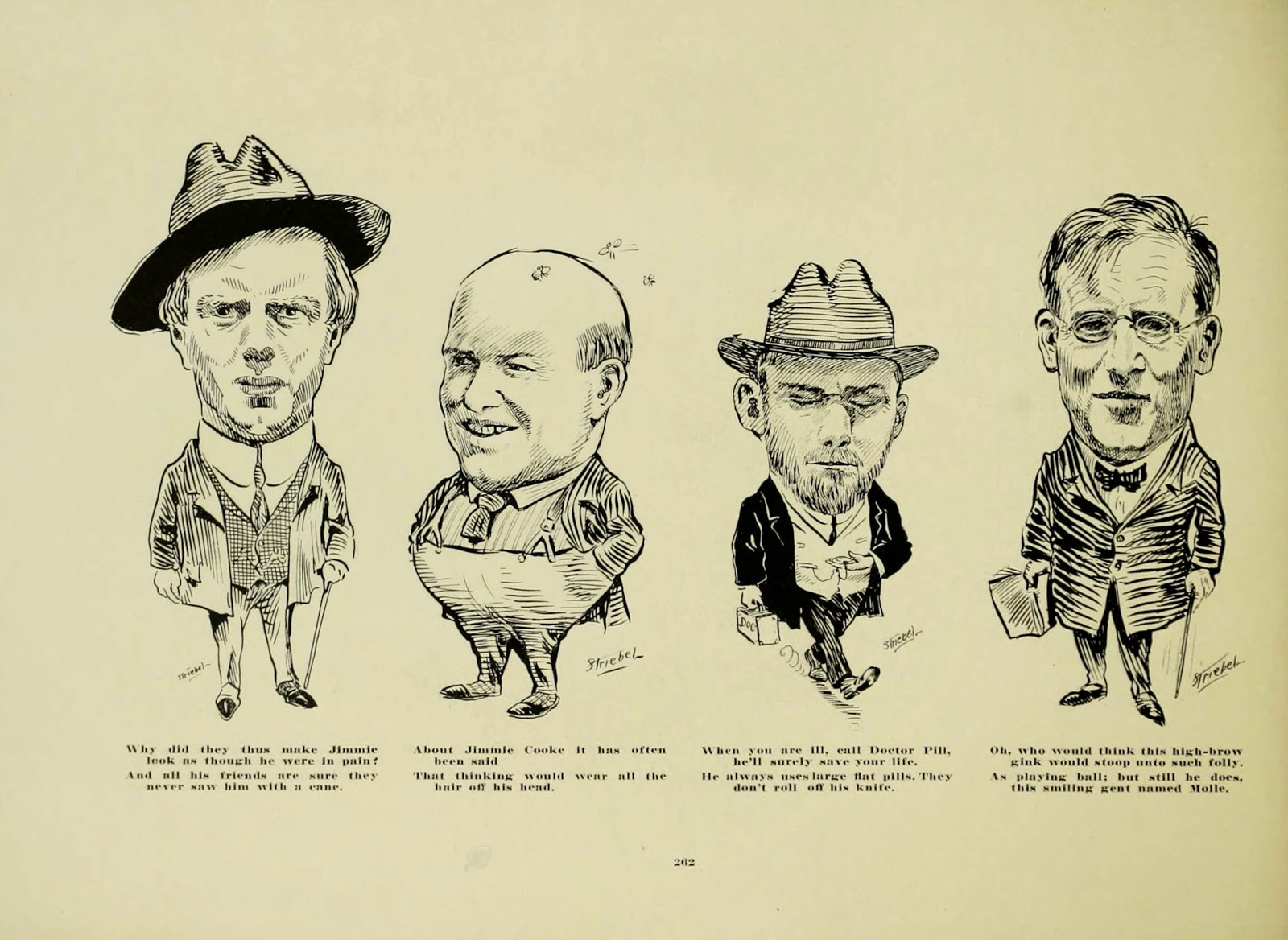 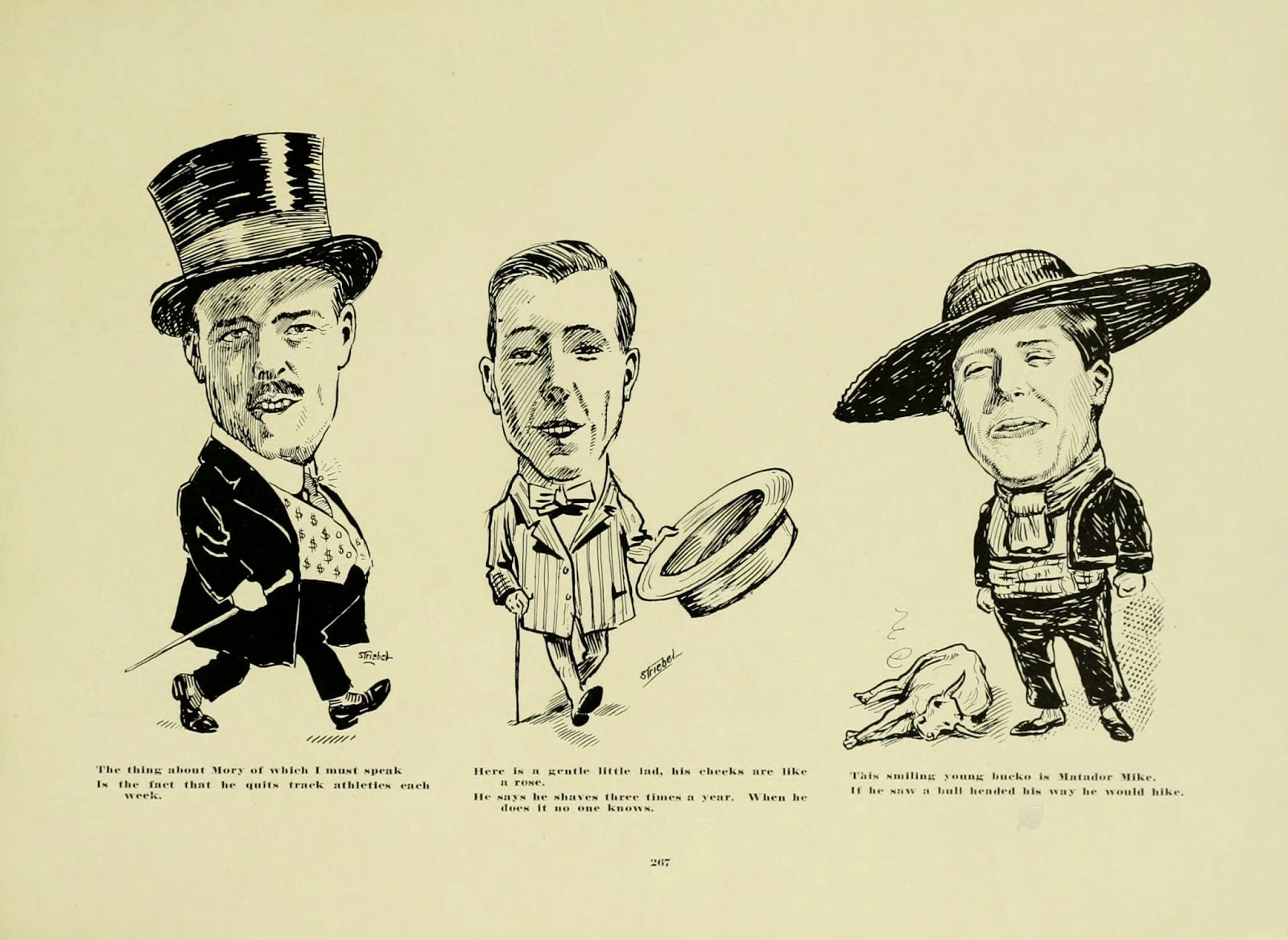 Striebel drew 37 caricatures. After Notre Dame, Striebel moved to Chicago, where he worked for “Meyer-Roth, Marshall Field & Co., the Chicago Tribune, Palmolive Soap, and other large purchasers of high-grade art,” according to the Fourth Estate, December 2, 1922.

The Indiana, Marriage Collection, at Ancestry.com, said “John H. Striebel” married Margaret Fernandez on June 30, 1915. Striebel signed his World War I draft card on June 5, 1917. He resided at 1966 East 72nd Place in Chicago. The commercial artist said he had two dependents, a wife and child. The description said he was of medium height and build with brown eyes and black hair.

Striebel’s address in the 1920 census was 6840 Merrill Avenue, Chicago. He was an advertising illustrator with a daughter and son. Also in the household was his brother-in-law, William Fernandez, an advertising art director.

Striebel collaborated with Notre Dame schoolmate, J.P. McEvoy, on his family serial, The Potters, for the Chicago Tribune, which mentioned the serial in its advertisement on the cover of Editor & Publisher, April 30, 1921: “‘The Potters,’ a new weekly humorous satire in verse on married life in a big city”. 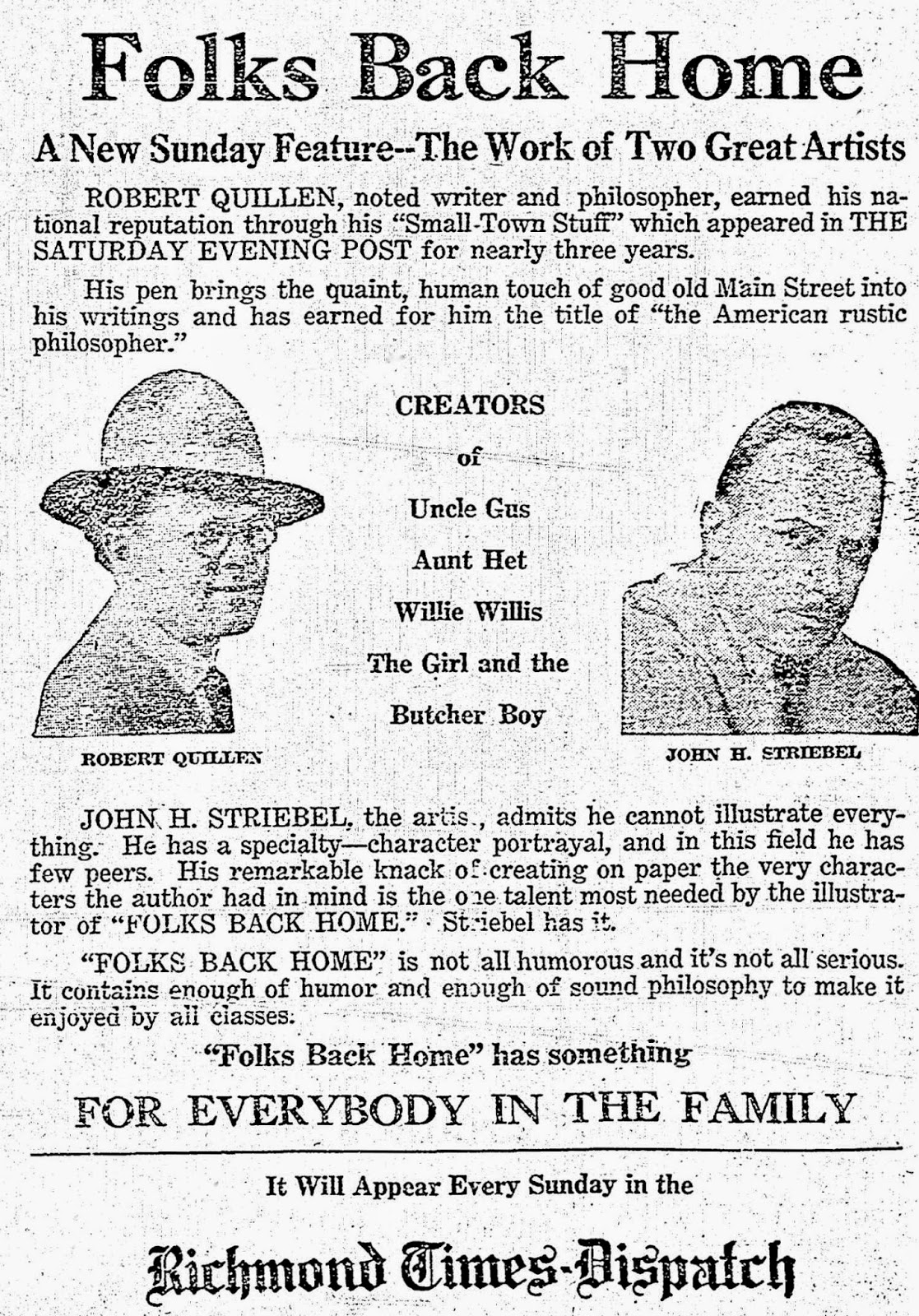 
John H. Striebel, who fifteen years ago, when on the South Bend News, had the distinction of being the youngest front page cartoonist in the country, and who now illustrates “The Potter” for the Chicago Sunday Tribune, has just signed an eight-year contract to do for Associated Editors a daily pictorial feature of his own, to be entitled “Pantomime.” 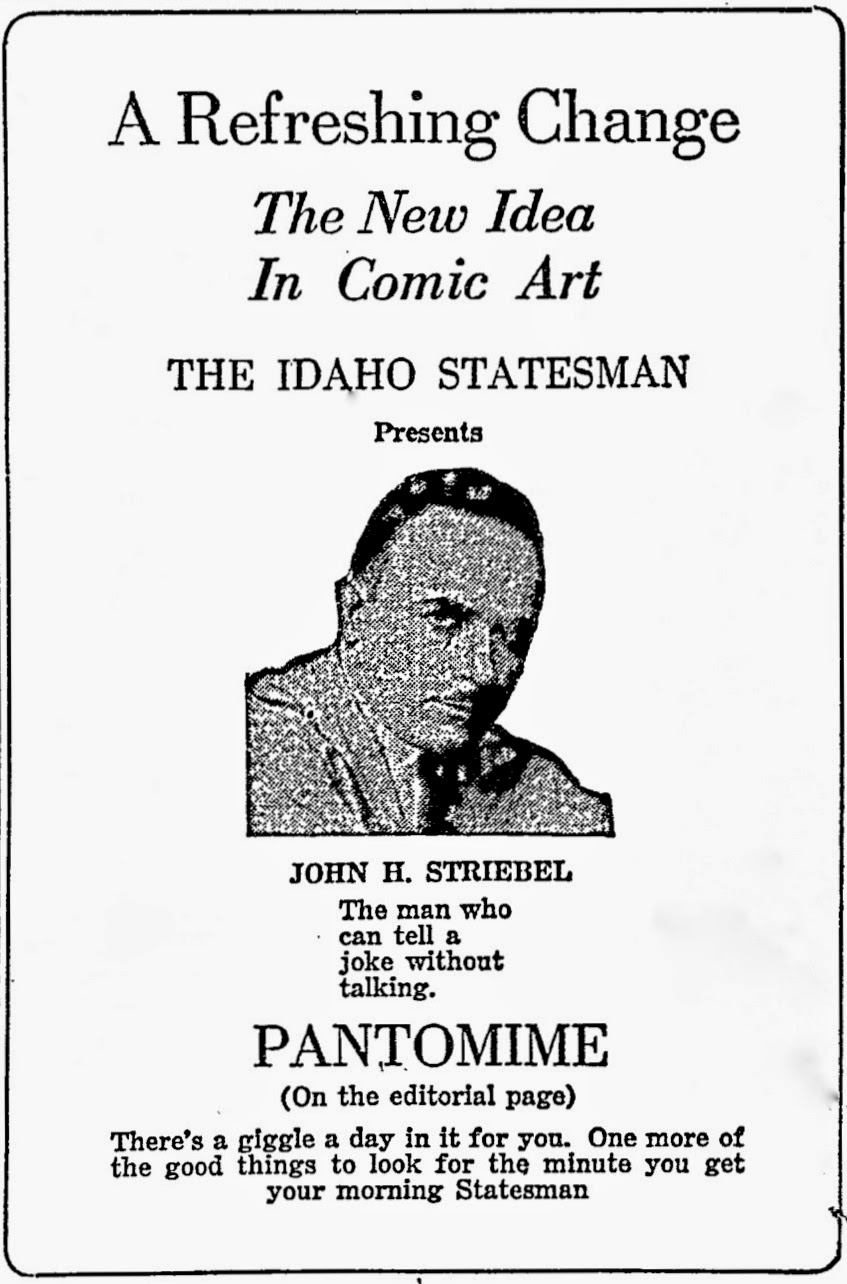 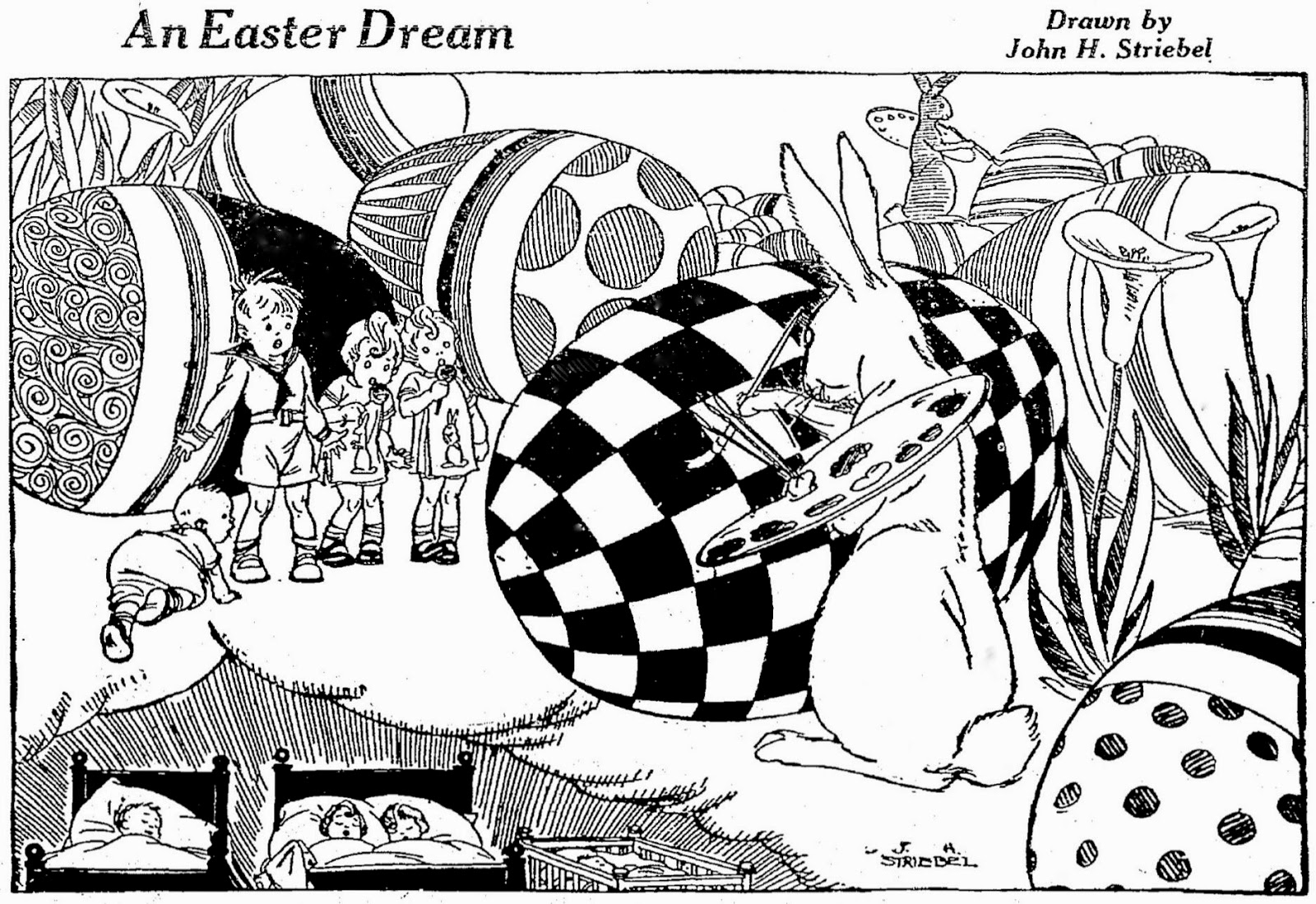 At some point Striebel moved to New York City. His family was listed in the 1925 New York state census at 15 East 9th Street. When Striebel and his wife returned from Europe on September 17, 1926, their address, on the passenger list, was Woodstock, New York. The 1930 census recorded the Striebels in Woodstock on Orchard Place. Striebel’s occupation was commercial artist.


…One of his creations, which appeared in Liberty magazine, was a serial about a 25-year-old showgirl named Dixie Dugan. McEvoy expanded the serial into a novel, and from there it went on to become a Ziegfeld musical. Striebel, though still in Chicago, was called upon to illustrate the Liberty magazine serial, which was then titled Showgirl. The original Dixie Dugan was based on silent film star Louise Brooks, but took on a character of her own when McEvoy infused her with the real-life qualities most of the current showgirl strips lacked. The result was renamed Dixie Dugan in 1931 and became one of America’s first “continuity,” or continuous action comic strips. Dixie Dugan was syndicated by the McNaught Syndicate and ran for more than 30 years.

The World-Herald (Omaha, Nebraska), October 28, 1929, published a photograph of show girl Wanda Valle who was Striebel’s model for Dixie Dugan. 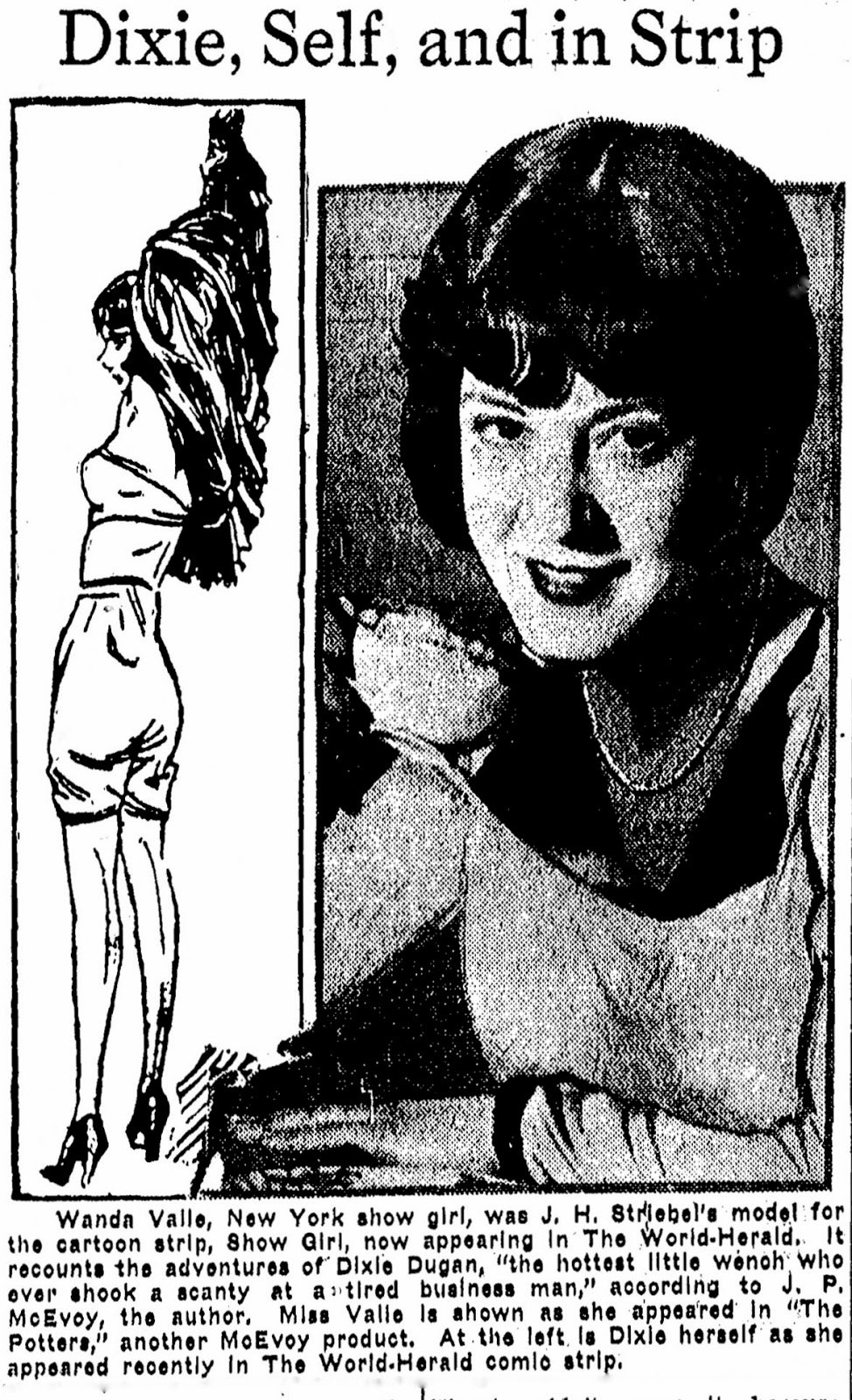 Striebel and McEvoy were profiled in Modern Mechanix, April 1937.

Creig Flessel was interviewed in the Comics Journal, #245, August 2002, and said that in 1936 the art agency Johnstone and Cushing declined to offer a job and suggested he seek work with Striebel. Flessel said he worked a year for Striebel doing pencils and backgrounds. He said Striebel penciled the heads and did the inking. Flessel explained that Striebel was doing advertising and needed an assistant. Flessel said Striebel’s studio “was over by Bloomingdale’s on the East Side, near the 59th Street Bridge, a three-floor walk-up,” and New Yorker editor, Harold Ross, was Striebel’s landlord. A 1939 Advertising Art annual had this listing: “Striebel, John H., 323 East 58th St., New York.”

Dixie Dugan and Joe Palooka met in a crossover published from January 4 to 6, 1940.

According to the Field Guide to Wild American Pulp Artists, Striebel produced artwork for a number of pulp magazines during the 1930s. He used the pseudonyms “William Streib” and “Stephen Waite”.

On August 21, 1934, Striebel married Evelyn Kreighbaunn, according to the Cook County, Illinois Marriage Index at Ancestry.com.

The couple was listed in the 1940 census as residents of Woodstock. Striebel’s occupation was illustrator.

Striebel was one of ten cartoonists featured in the Life magazine’s February 3, 1947 pictorial, “I Could Draw with My Eyes Shut”.


John Striebel, creator of the comic strip, “Dixie Dugan” syndicated in 300 newspapers, and his family have set up shop in the City of Anna Maria for the Winter.

Striebel says he finds the Island a fine place to work, similar to Woodstock, N.Y., his home.

The strip is a sort of family affair. Striebel does the art work, his daughter Marjorie Huffine, handles the lettering, and Mrs. Striebel is in charge of Dixie’s fashion department. The script is written in Hollywood by Renny McEvoy, stepson of J.P. McEvoy, Striebel’s original partner.

News of the passing of Striebel’s father was printed in the Kingston Daily Freeman, July 21, 1954.


Henry W. Striebel, father of John H. Striebel, prominent cartoonist of Bearsville, died in Kingston Tuesday. A native of South Bend, Indiana Mr. Striebel has resided with his son at Bearsville for a year. Besides the son, he leaves a daughter, Mrs. Howard Walter and three grandchildren; two sisters Mrs. Otto Rasp and Mrs. Elmer Bernhard of South Bend. The body was sent to South Bend by the Lasher funeral Home of Woodstock today for services and burial on Friday.

Striebel legally change his name, from Floyd H. Striebel to John H. Striebel, according to a legal notice in the Kingston Daily Freeman, October 18, 1958.

John H. Striebel, a long time resident of Woodstock and a well known illustrator and cartoonist died at his home in Bearsville Tuesday afternoon after an illness of several weeks.

Mr. Striebel. who with the late J. P. McEvoy collaborated on the cartoon strip, “Dixie Dugan,” had lived in Woodstock since 1923. Born in Bertrand, Mich., Sept. 14, 1891, Striebel was the son of Henry W. Striebel and Helen Striebel. Shortly after his birth, the family moved to South Bend, Ind., where he grew up and attended school.

At the age of 14 he was a political cartoonist for; the South Bend Daily News, later using the proceeds of his talent to pay his tuition at the University of Notre Dame. Mr. Striebel went to Chicago where he became an advertising illustrator for the Chicago Tribune.

His first comic strip. Pantomime, was a feature for eight years, after which Striebel illustrated The Potters, a feature written by J. P. McEvoy who had grown up in South Bend and attended Notre Dame University with Mr. Striebel.

After illustrating Show Girl, Striebel came to Woodstock in 1923 to study painting with Henry Lee McFee and Andrew Dasburg. Before Striebel was able to apply himself intensively to the study of painting, he found himself enmeshed in the Dixie Dugan cartoon and soon “Dixie” took precedence over all of his other endeavors which included cover illustrations for Liberty magazine.

Funeral services will be held Friday 11 a. m. at the Lasher Funeral Home Inc., Woodstock. The Rev. Arthur E. Oudemool, pastor of Old Dutch Church, this city, will officiate. Cremation will take place at the Gardner Earl Memorial Crematorium, Troy. There will be no calling hours at the funeral home.

Comments:
I love finding your post. John was my great Uncle, brother to my paternal grandmother Bertha Striebel (Mrs. Howard Walter). I was born in 1944 to Forrest Goodenough and Lucia Crocheron Goodenough. Many fond hours of my childhood were spent in Woodstock and the Bearsville home. Uncle John would let me sit beside him as he worked on Dixie Dugan strips.
Well, enough fond memories. Thank you for highlighting his work. Sincerely, Crow Johnson Evans (nee Amy Lucia Goodenough)