Odin Burvik was the pseudonym of Mabel Glazier "Grace" Burwick, who was born in Colorado Springs, Colorado on September 17, 1904. Her full name was pieced together from the census records and a family tree, and her birth information was on a 1933 passenger list at Ancestry.com. Trina Robbins wrote, in A Century of Women Cartoonists (1993): "Another woman who took a masculine name was Mabel Burwick; at the start of her career, she changed her name to Odin Burvik."

The Colorado Springs Directory 1905 had a listing for her parents, Odin and Della, who resided at 128 West Mill. He was a driver at the Houston Lumber Company. The 1907 directory recorded them at 418 South Tejon and he remained employed at Houston Lumber. Iowa Gravestone has a photo of Odin's gravestone, with the dates "1879–1908", at the Holman Sergeant Bluff Cemetery in Woodbury County, Iowa.

In the 1910 U.S. Federal Census, Burwick and her mother, a widow and dressmaker, lived in Colorado Springs at 914 Lake Avenue. Later, her mother remarried.

The 1920 census recorded Burwick and her mother and brother, Robert, who both had the Olesen surname, in Los Angeles, California at 6110 Moneta Avenue. She worked as a saleslady in her mother's candy store. The whereabouts of her Danish step-father is not known. The family moved again.

In 1930 they all had the Burwick surname and were in Minneapolis, Minnesota at 916 Seventh Avenue. The census had her name as Grace, which may have been a nickname. She was a self-employed commercial artist and her mother was a school teacher. On September 13, 1933, she returned from Europe, sailing from Le Havre, France to New York City. On the passenger list, it appears she was employed by the L.S. Donaldson Company in Minneapolis, Minnesota. Her name appeared in an issue of the Bulletin, Volumes 23-24, 1934, from the Minneapolis Institute of Arts, and Minneapolis Society of Fine Arts. She was in The Federal Illustrator, Spring Number, 1938. According to the Kingston Daily Freeman (New York), April 13, 1968, she "…decided at the age of 12 to become a professional artist…Mrs. Waugh studied at Minneapolis and Chicago Art Institutes, and with Harvey Dunn at Grand Central Galleries in New York…"

The Catalog of Copyright Entries, Part 1, Group 2, Pamphlets, Etc. 1940 New Series, Volume 37, Number 2 has an entry for her and John Charles Fabbrini. New York City was the home of the Burwicks in the 1940 census. They lived at 51 West 68 Street. She was a free-lance artist, who had two years of college; her brother was a hotel porter. The census asked where one lived in 1935, and the Burwicks had been in Chicago, Illinois.

Coulton Waugh had been producing the Dickie Dare comic strip for many years. In his book, The Comics, he explained how Burwick became involved with his strip.

…When the writer decided to turn finally to other matters, he had as assistant a determined young woman with an interesting Norwegian name, Odin Burvik. She could herring-bone up a hill on skiis as fast as he could roll down them, and she had one burning, devastatingly difficult ambition: to become a comic artist.

Knowing the stress and strain of strip-producing, the author decided to try her determination and gave her the most difficult assignments he could. "You can't be sick; no holidays," he said. She wonders now how she ever survived; but she learned so much in a single year as assistant, that when the big chance came in the spring of 1944, the Associated Press agreed to try her out. She won, and soon she was in full charge of "Dickie," matching his bubbling energy with with the sense of life which gives her style its own special distinction.


"…Coulton Waugh, son of the late Frederick Waugh of seascape fame, has long been the creator of a popular cartoon strip titled 'Dicky [sic] Dare'…Not long back he decided that he wanted to give it up, and in due course, an open competition was held by the Associated Press to find someone to carry it on. One Miss Odin Burvik won. Miss Burvik was a former assistant of Coulton...Well…it's still in the family…he married the girl!…"

The Newburgh News (New York), September 6, 1945, reported the marriage of Burwick's brother, who "…at present is assistant to his sister, Mrs. Coulton Waugh, of Little Britain who draws a comic strip for Associated Press…" In Alter Ego #59, Fran Matera explained how he took over the strip and who did the lettering: "…the Associated Press hired me to take over Dickie Dare. I went to see Coulton Waugh and his wife, Odin. Waugh was writing and doing a lot of the art, and his wife worked on it for a while, signing it 'Odin.' Her brother lettered. Gradually, both Coulton and Odin wanted to taper off…doing the strip so they could paint, and I took over. Odin's brother continued to letter it, but he didn't live near me, so I decided to take that over…." Dickie Dare ended in 1957.

Burwick devoted her time to painting. Parade magazine, January 12, 1958, had an advertisement for Art Instruction, Inc., which had a paragraph about her (below). 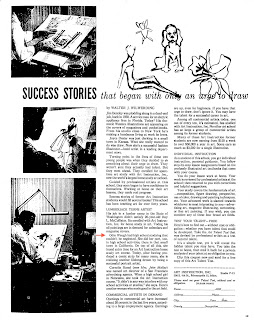 The Kingston Daily Freeman said, "…She gained her total knowledge of color and oil painting from working with her husband and the two often work together on a portrait. The almost life-size portrait of their daughter, Phyllis, is one example of this collaboration…" The Newburgh News, March 18, 1958, noted the upcoming lecture at Temple Beth Jacob Brotherhood: "…The program will feature a lecture discussion on 'The History of Cartooning' by Coulton and Odin Waugh, nationally-syndicated cartoonists and creators of 'Dickie Dare'…."

During the mid-1960s and 1970s, the couple produced the panel Junior Editors Quiz.

Citizen Advertiser (Auburn NY) 11/18/1969
Caption and word balloon says: "Some may enjoy abstraction
but for me the things in nature are just—so beautiful or
funny—that I can't resist drawing them just as they are—".
On the same day, The Rock Hill Herald (South Carolina)
published a different version of the same question.

The Evening News (Newburgh, New York), June 11, 1964, published photos of Phyllis and her mother, and the November 6, 1983 edition has another photo. The Otsego Farmer (Cooperstown, New York), July 17, 1969, reported the upcoming exhibition at the Pioneer Gallery, whose members included the Waughs and their daughter.

Coulton Waugh passed away May 23, 1973, according to the New York Times, who was survived by his wife, Odin, son, John, Daughter Phyllis Goodman, and sister, Gwenyth Clymer. According to Who's Who in U. S. Writers, Editors and Poets, 1988, she married Hubert A. Buchanan on September 13, 1981. They lived at 290 West 19th Street, in Pueblo, Colorado. She illustrated his book, Winnowing Winds (1984).

Burwick, as Odin Waugh, passed away June 1998 according to the Social Security Death Index. The USGenWeb Project website, Welcome to the Orange County, New York GenWeb Site, has the Times Herald-Record Obituary Index June 1998. The entry has an error: "Burwick Glazier, Odin [Waugh, Buchanan] / Born 09/17/1904 / Birth Place Colorado Springs, NY [sic] / Died 06/17/1998". Burwick was born in Colorado state. Her mother's maiden name was Glazier, according to a family tree at Ancestry.com. Her mother passed away December 3, 1964, and brother on December 15, 2006. In The Comics, Coulton Waugh said: "…The author would like especially to thank his research assistant, Robert Burwick, whose wide knowledge of the subject and sharp intelligence proved invaluable during the several years of hard work which went into the book…."

Comments:
Odin Waugh painted my portrait as a 10 year old child. My father took me to their home in New Windsor many times. They were amazing.