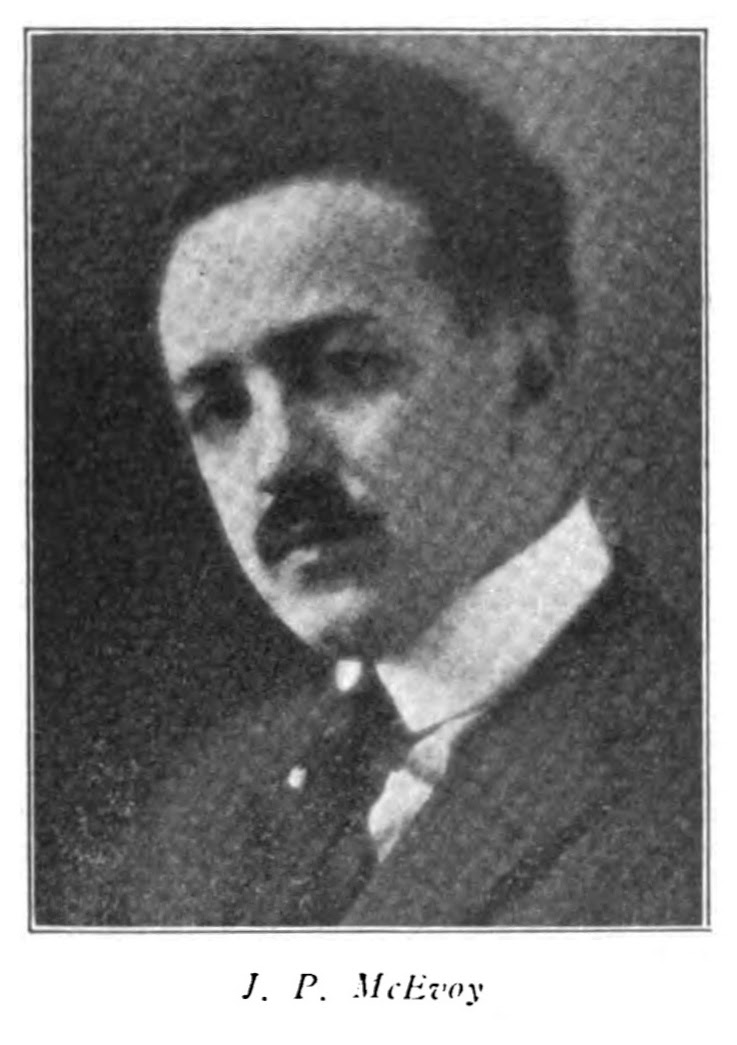 
…J.P. McEvoy doesn’t remember where he was born—but he has been told that it was New York City and that the year was 1894. He doesn’t know whether this was a good year to be born in or not, and is glad now that nothing can be done about it. He didn’t go to school—he was dragged. This went on for a number of years, during which time McEvoy grew stronger and stronger—until finally he couldn’t be dragged any more. This was officially called the end of his education….

According to the New York Times, August 9, 1958, McEvoy was the adopted son of Patrick and Mary Anne McEvoy. The 1900 U.S. Federal Census recorded the couple in New Burnside, Illinois. He was an Irish emigrant and school teacher who came to America in 1868. She was an Illinois native. They married in 1875. A male servant was in their household. The Bridgeport Post (Connecticut), August 8, 1958, said: “…Patrick Griffin McEvoy, was a mathematical astronomer who taught for a time at Trinity College in Dublin, Ireland.” It is not known when McEvoy joined them.

I believe the 1910 census, which was enumerated in April, recorded McEvoy’s birth name, Joseph Hilliek or Hillick, who was 15 years and born in New York state. His relationship to the head of the household, “Marry McAvoy”, a widow, was “helper.” Patrick passed away June 18, 1908. The other resident was Mary’s niece, Nellie “Hanagan.”


Joseph Hilliek/Hillick became Joseph Patrick McEvoy when he enrolled at the University of Notre Dame in Fall 1910. The Bulletin of the University of Notre Dame: General Catalogue 1910–1911, listed him in the section, “List of Students Matriculated During the Scholastic Year from September, 1910 to June, 1911.” Who Was Who said he was a student from 1910 to 1912. At Notre Dame, he met his future collaborator, artist John H. Striebel.


It is interesting to take a peep into Mr. McEvoy’s past. He early acquired the art of hustling—perhaps that is why he is able now to do the work of two or three men. At Christian Brothers’ College in St. Louis he was the star bed maker. One hundred and fifty a day was his regular chore. Later, at Notre Dame University, he was a “waiter” at meal times and a newspaper man in the evenings. He worked on the South Bend News from six in the evening until two in the morning. When pay day came he required no guard to protect him—$4.00 constituted his salary!

When he came to Chicago, after graduating, he obtained a position as cub reporter in the sporting department of the old Record-Herald.

The Indiana Marriage Collection at Ancestry.com said McEvoy married Mary Crotty on April 14, 1915. Crotty was previously married to Arnold Benjamin Wurnelle who had changed his surname from Wurm. Their son, Reynold Thomas Wurnelle, was born in Cleveland, Ohio and, years later, would be known as Renny McEvoy. McEvoy and Crotty, who used the surname Wurm, married again in Chicago on April 3, 1916, according to the Cook County, Illinois Marriage Indexes at Ancestry.com.

At some point, McEvoy left the Record-Herald for the Chicago Tribune. He was with the Tribune when he signed his World War I draft card June 5, 1917. McEvoy resided at 5841 Prairie Avenue. He named his wife and child as dependents. His description was short and stout with brown eyes and black hair. Around that time, McEvoy also served as editor at P.F. Volland Company, publisher of books, post cards and greeting cards. Geyer’s Stationer interviewed McEvoy about his work at Volland. McEvoy discussed the greeting card business in American Magazine, January 1922.

In 1919, Volland published two collections of McEvoy’s writings: Slams of Life: With Malice for All, and Charity Toward None, Assembled in Rhyme and The Sweet Dry and Dry, Or, See America Thirst! Both books were illustrated by Frank King.

McEvoy collaborated with Notre Dame schoolmate, John H. Striebel, on his family serial, The Potters, for the Tribune, which mentioned the serial in its advertisement on the cover of Editor & Publisher, April 30, 1921: “‘The Potters,’ a new weekly humorous satire in verse on married life in a big city”. 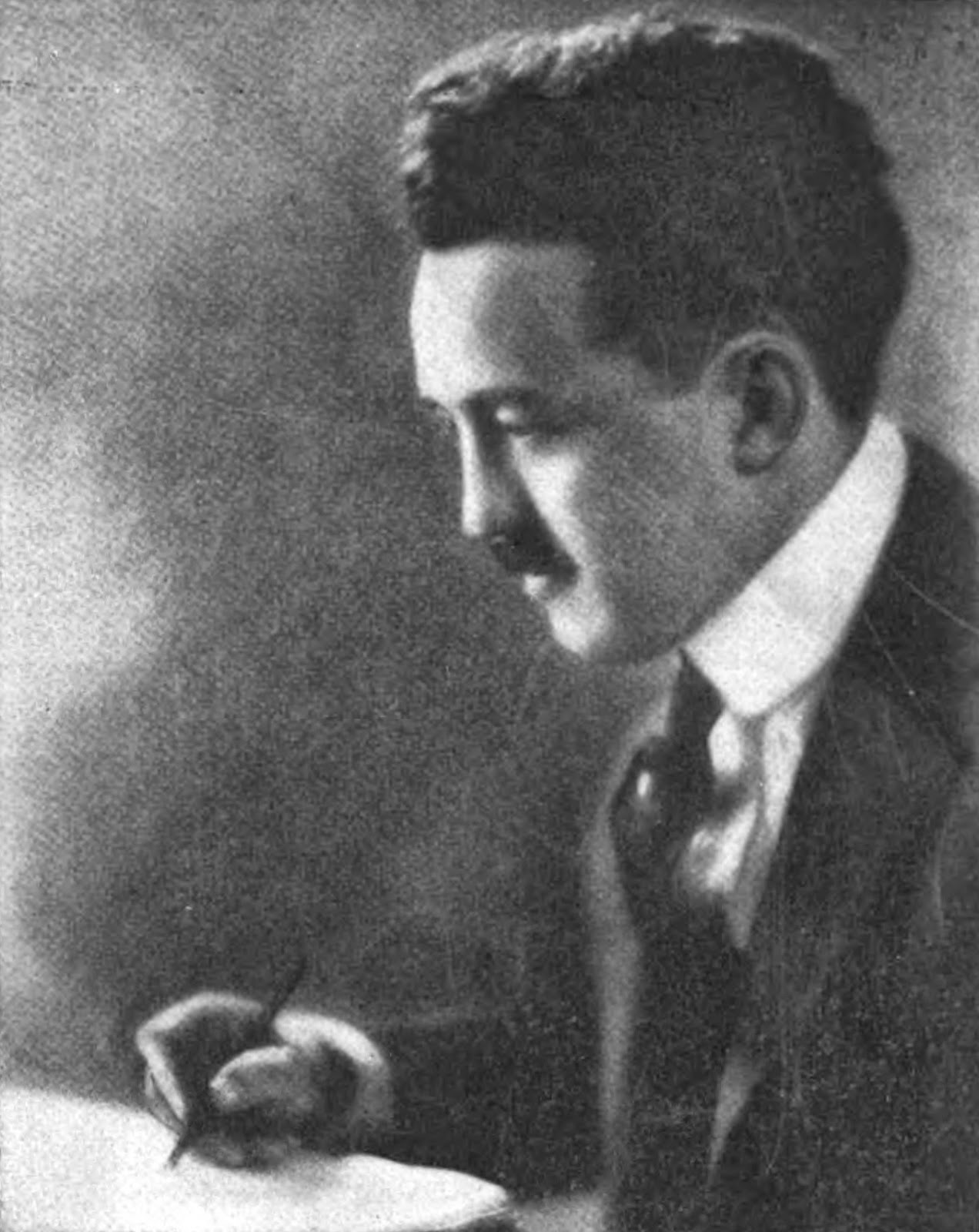 
J.P. McEvoy, author of “The Potters” in the Chicago Tribune and of the “Merely McEvoy,” essays for Associated Editors, has resigned his position as editor of the P.F. Volland Co. in order to devote more time to his newspaper features.


Chicago, Aug. 26.—J.P. McEvoy, well-known writer, appeared in the Lake county court at Waukegan Thursday with his attorney, and made charges that his wife, Mrs. Mary E. McEvoy, isn’t taking proper care of her two children on her alimony of $65 a week. He made the charges in support of his suit for divorce on a cross bill and also accused his wife of gay “carryings on” in her home at late hours after the children had been put to bed.

The wife in her bill charged that McEvoy was too friendly with other women. He is reputed to be earning between $400 and $700 a week from his writings. McEvoy charges that his wife is living beyond her income.

The Potters was adapted for the stage and was a hit according to the Tribune, December 10, 1923. Due to the success of The Potters, the New York Times invited McEvoy to write about himself. “Concerning Myself” was published on December 16, 1923.

According to American Newspaper Comics, the comic strip version of The Potters was produced by L. Franklin Van Zelm in 1924. The book version, The Potters: An American Comedy, was published by Reilly & Lee Company, in 1924. 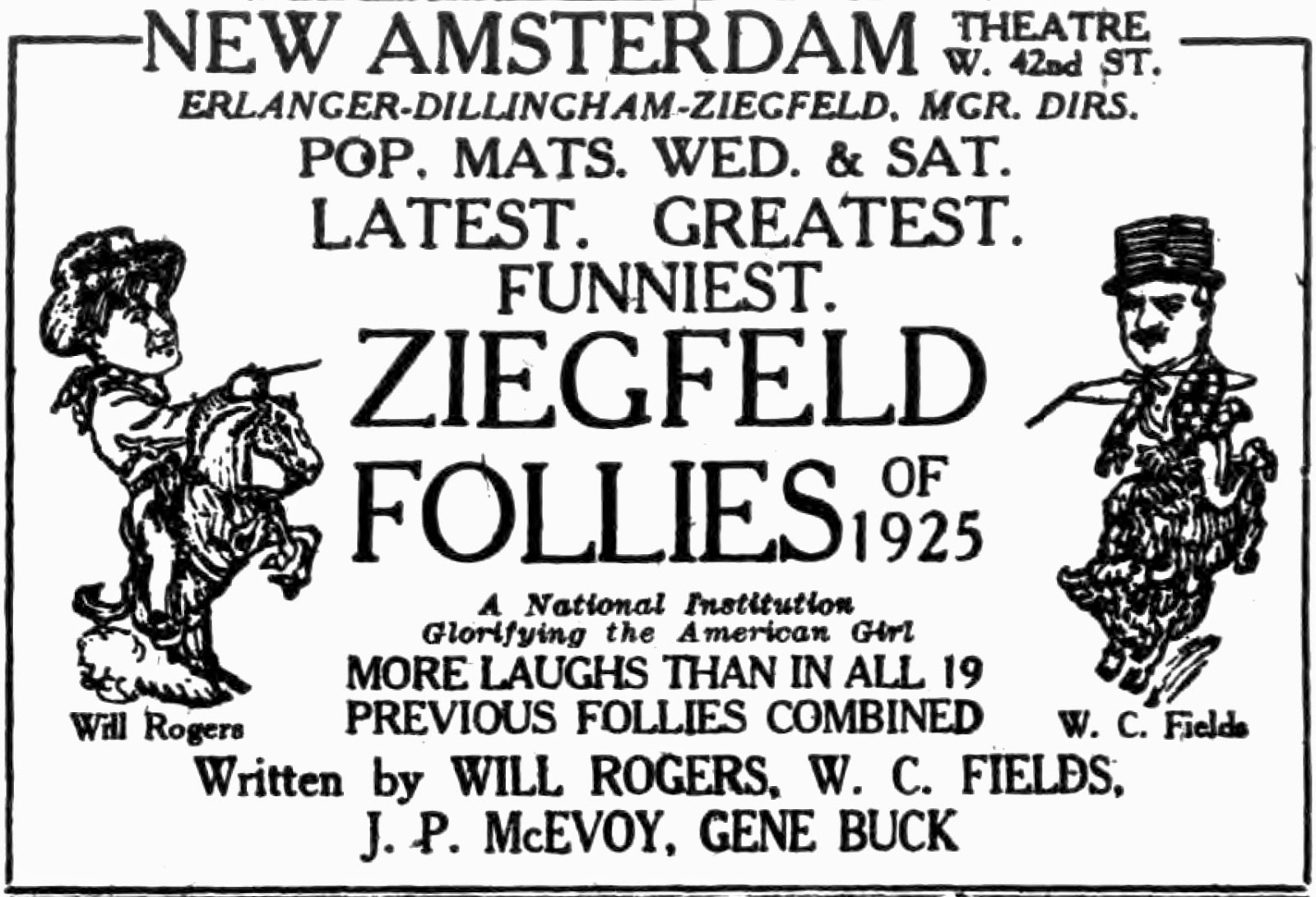 McEvoy used his comics experience to write a revue called The Comic Supplement. In Man on the Flying Trapeze: The Life and Times of W. C. Fields (1999), Simon Louvish devoted a chapter on the making of The Comic Supplement which starred W.C. Fields and was produced by Florenz Ziegfeld. A photograph of McEvoy and Fields is here.

McEvoy and Striebel teamed-up again on Show Girl which was serialized in Liberty magazine from January 28 to March 24, 1928. It was followed by a Show Girl novel, Ziegfeld production and two movies. The comic strip adaptation of Dixie Dugan, by McEvoy and Striebel, ran from October 21, 1929 to October 8, 1966. 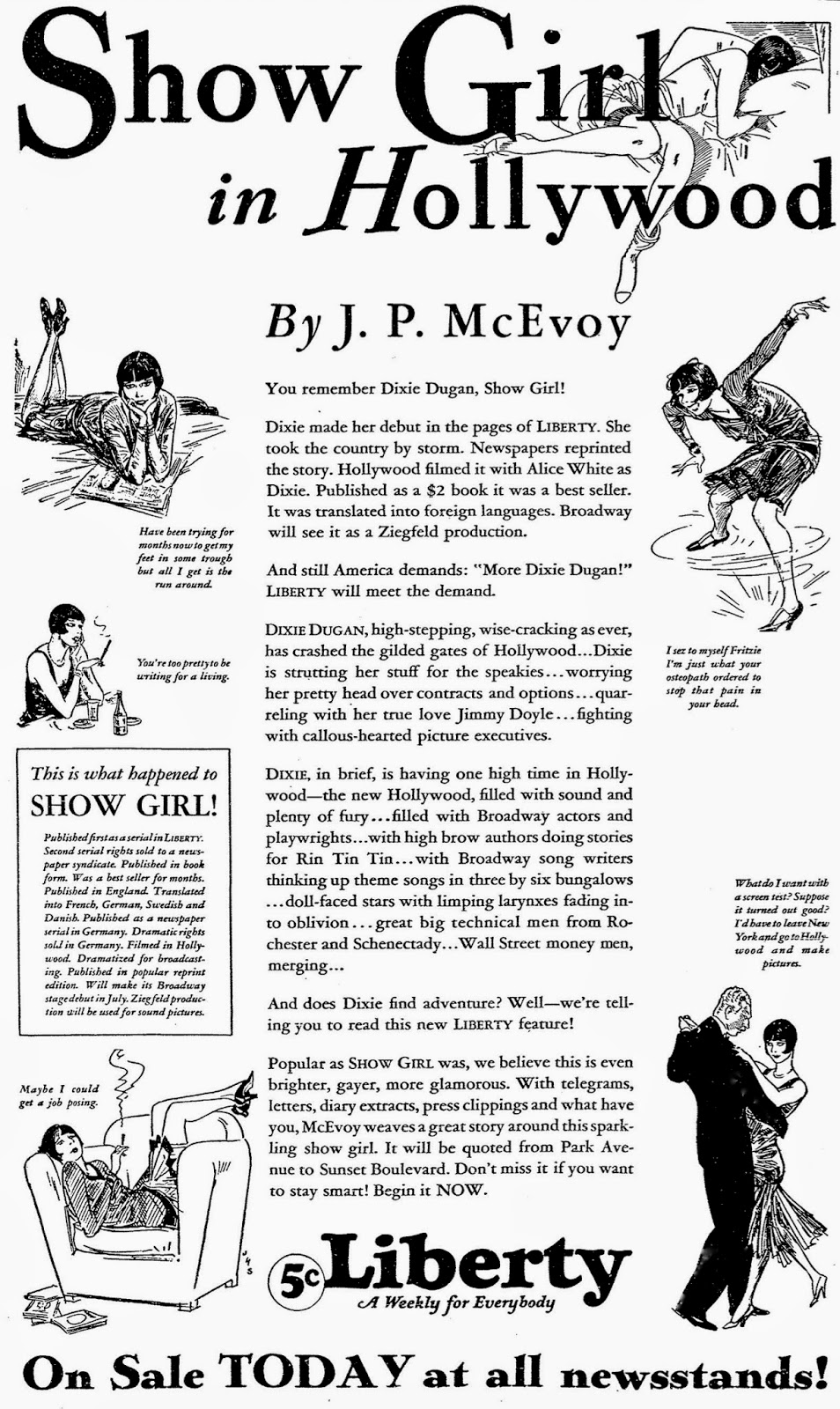 McEvoy turned up in the Dixie Dugan strip as reported in The Daily Picayune (New Orleans, Louisiana), October 17, 1939 (below). McEvoy said: “About three years ago, I turned the strip over to my son Denny and Striebel, and I’m not in it any more. That is, I’m not in the writing of it. I’m actually in the strip. Denny and Striebel made Mr. Brudway look like me as a joke. I think it’s funny, too.” American Newspaper Comics said Renny scripted Dixie Dugan beginning in the mid-1940s. 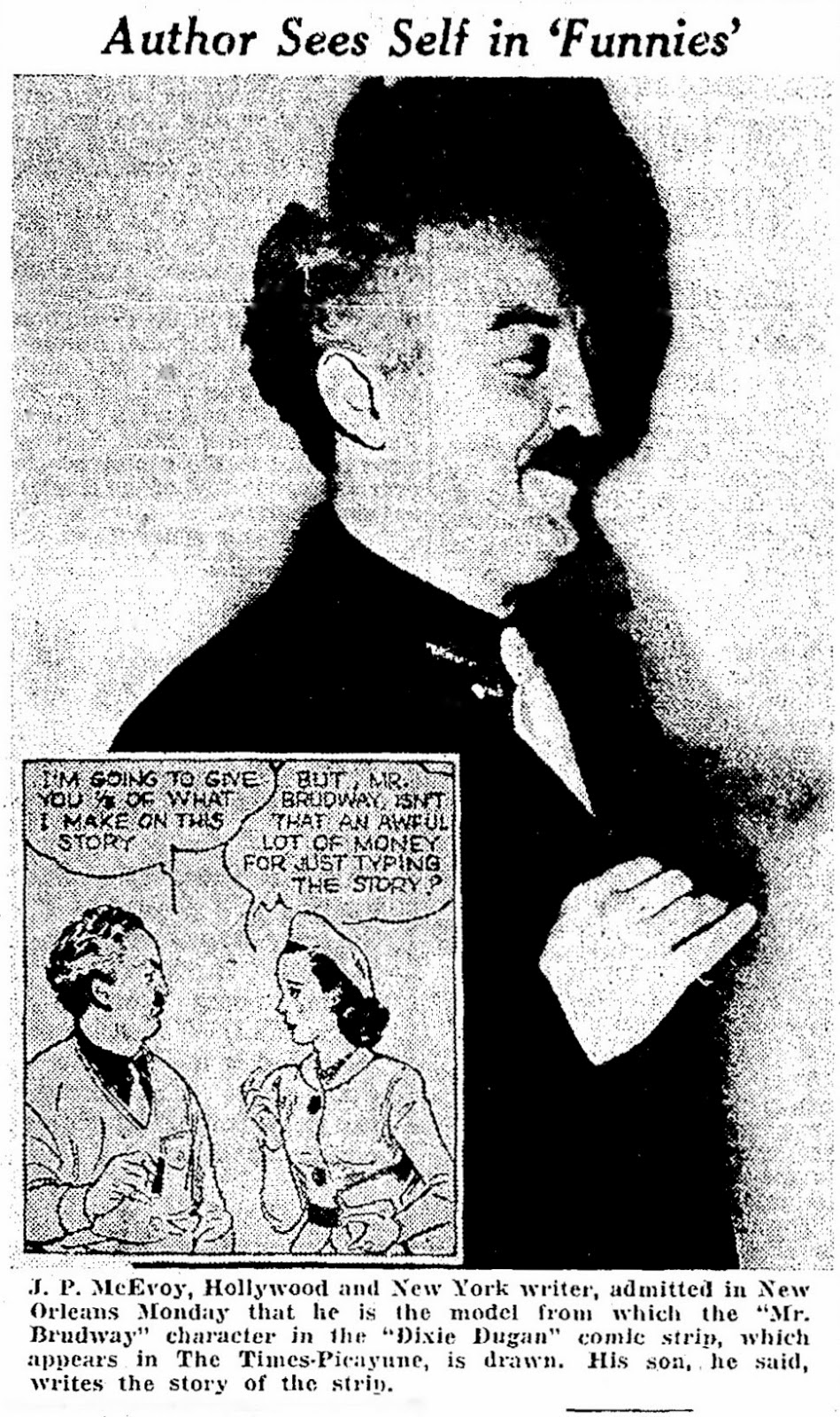 The 1930 census recorded McEvoy and family in Manhattan at 5 Prospect Place. His occupation was writer of theater books. Passenger ship lists from 1930 to 1932 said his address was Woodstock, New York. In 1932, McEvoy copyrighted his book, Why I Live in Woodstock. At some point McEvoy moved to Hollywood, California.

McEvoy’s third marriage was to Margaret Santry on December 19, 1936, in Las Vegas, Nevada. In the Oakland Tribune (California), December 22, 1936, McEvoy said: “I have great hopes that this marriage will be a success, principally because in all the years I have known my wife she has always had a pencil. Besides she will never be able to make me feel inferior, because she can’t spell either.” 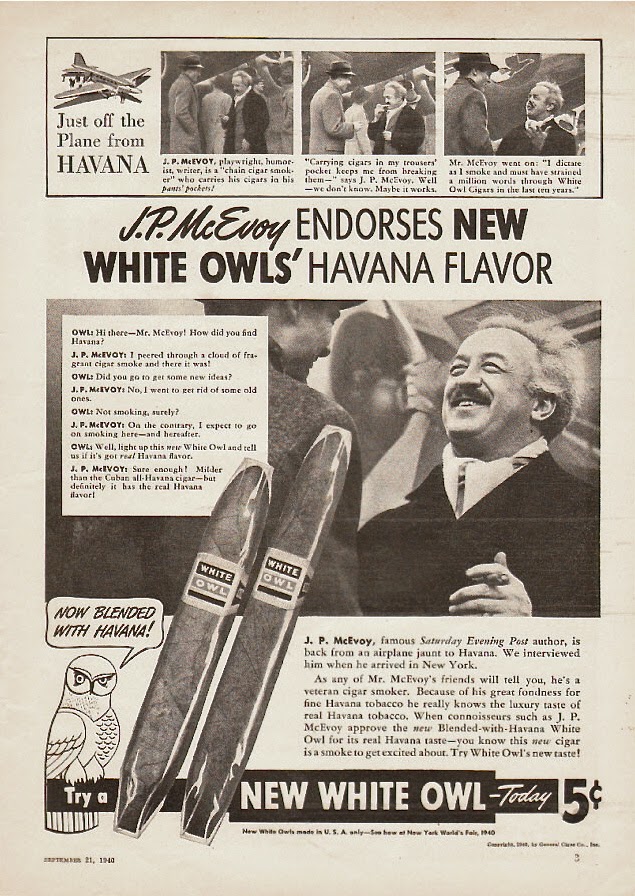 1940 advertisement appeared in magazines and newspapers.

According to the 1940 census, McEvoy and Margaret resided at Essex House, Central Park South, in New York City. The New York Times said McEvoy was a roving editor, beginning in the late 1930s, for Reader’s Digest and traveled all over the world.

On May 2, 1942, the New York Times reported McEvoy’s foster mother had passed away the previous day at her home in New Burnside.

McEvoy passed away August 8, 1958 at his home on South Mountain Road, New City, New york. His death was reported the following day in the New York Times and Bridgeport Post. The Kingston Daily Freeman, October 10, 1959, reported the second sale of McEvoy’s estate and told of its history.


The former J. P. McEvoy estate, one of the largest and most impressive properties in the Woodstock vicinity,…is located on Route 212, a short distance from the heart of Woodstock.

This beautiful property consists of three dwelling units, numerous outbuildings, swimming pool, tennis courts and many other luxurious features located on some 22 acres with extensive frontage along the Bearsville Road….

…J. P. McEvoy built the fabulous estate from an humble beginning, starting in 1924 when he first came to Woodstock. The original property consisted of a small farmhouse, a garage and an old barn. In due time, McEvoy, a nationally prominent playwright and fiction writer, was to pour more than $75,000 into additions and renovations.

…In short time, the burgeoning McEvoy residence was busting at the seams with a steady influx of prominent personalities from the world of art, music and letters. McEvoy...continued to make additions and improvements.

…An early associate of McEvoy’s relates that during one hectic weekend almost the entire membership of the American Society of Artists and Illustrators attended a fabulous weekend party. In his constant search for one bit of space for a private studio of his own, McEvoy kept building additions that were promptly pre-empted by distinguished guests. The place just grew and grew.

…The list of names who made frequent trips to visit with J. P. included the literary giants of the day, among the many who knew him were members of the famous Round Table group of The New Yorker—Dorothy Parker, Monty Woolly, Woolcott Gibbs, Franklin P. Adams and John Striebel, a budding cartoonist who went on to earn fame as the creator of the cartoon strip, Dixie Dugan. Striebel has been a resident of Woodstock for many years.

…From outside the literary world came Frank Lloyd Wright, the famed architect; the great criminal lawyer. Clarence Darrow; Rube Goldberg, the cartoonist; Jeff Maccamber, a cartoonist: George Antile, noted composer who spent a whole summer in Woodstock, and many others. McEvoy’s was the social and cultural center of Woodstock, a symbol of an era that has passed forever.

Some of the books McEvoy authored are here. A list of his work adapted to film is in The Complete Index to Literary Sources in Film (1999).

Comments:
I am a grandson of JP McEvoy and loved the tales my mom (Margaret McEvoy, child of 3rd wife) used to regale us with. Thanks for filling in many blanks in our family history!