Amilcar Ruben Moreira aka Rubimor was born in Fajardo, Puerto Rico on July 27, 1922, according to a 1945 passenger list at Ancestry.com. Wikipedia said, “…Moreira moved with his mother to New York City when he was 4….” A record of their entry has not been found.

The 1930 U.S. Federal Census recorded Moreira in Manhattan, New York City, at 2–4 West 116 Street. His mother, Josefina, a stenographer at an export house, had remarried to Juan Gonzalez, who was a laborer on the I.R.T. Subway.

In the 1940 census, his mother had remarried, to Antony Cataldo, who was a mail order clerk. They lived at 914 Union Avenue in the Bronx, New York. Moreira’s name was misspelled as “Amilier Malira”. On July 26, 1945, he returned, with his mother and maternal grandmother, from Puerto Rico. Their address was 941 Simpson Street in the Bronx. Who’s Who of American Comic Books 1928–1999 said he attended Cooper Union and Pratt Institute. According to Wikipedia, his career began in 1942 in the comic book industry. “…He took over the Tarzan sunday page from Burne Hogarth in [December 2,] 1945. He was the sole artist and writer of it until [August 3,] 1947, using the pen name Rubimor.” Heritage Auctions has a few of his original Tarzan pages. 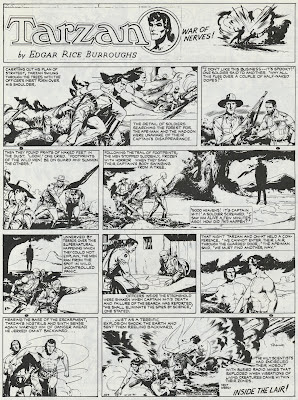 After Tarzan, he resumed his comic book work into the early 1960s. In the book, The Life and Art of Murphy Anderson (2003), Anderson said Moreira attended the Grand Central School of Art. His comic book credits are at the Grand Comics Database. Who’s Who of American Comic Books has an overview of his career.

When Moreira returned from a visit to Puerto Rico in December 1950, he gave his address as 213-18 110th Avenue, Queens, New York. He ghosted the strip Casey Ruggles for a brief period. It’s not clear when he moved to Puerto Rico permanently; Wikipeida said it was in 1958, while Comic Vine said it was in the early 1960s. The book, Puerto Rico—Arte E Identidad (1998) said Moreira participated in


The Workshop of the Institute of Puerto Rican Culture, organized by Lorenzo Homar in 1957 at the behest of Doctor Ricardo Alegrfa, would assume the philosophy and ideals of CAP [Center of Puerto Rican Art] and DIVEDCO [Community Education Division], thus giving momentum to the processes of engraving and silkscreening, particularly in reference to the art of the poster, the island’s most significant form of graphic expression. Freedom of expression was to characterize the evolution of the Workshop, which at different moments brought together under its aegis prominent artists and apprentices such as Myrna Báez, José Alieea, Francisco Rodón, Rafael Rivera Rosa, Luis G. Cajiga, Rubén Moreira, Antonio Martorell, Rafael Tufiño, José Rosa, Luis Alonso and Jesus Cardona.

An undated Moreira poster is at Puerto Rico 1952–85 in Posters. The Catalog of Copyright Entries: Third Series, Volume 18, Part 1, Number 2, Books and Pamphlets July–December 1964, named him as a contributor to Heroes in Fact and Fable, which was produced by the Puerto Rico Department of Education.

Moreira passed away in May 1984, in Puerto Rico, according to the Social Security Death Index.

Comments:
Moreira also did the cover pencils and the art in Showcase No. 9 starring Lois Lane (1957). It's worth looking up -- he was a great artist!

One of my favorite artists! He did Alex Raymond-like pencils and Joe Kubert style inks :)
I discovered him on Roy Raymond at DC Comics and his covers for Jack Schiff's House of Mystery / Secrets and Tales of the Unexpected.
He somehow managed to do DC covers right through 1963, apparently via the postal service.

Alex, a question came up at the GCD Facebook page. In your bio bio of Ruben Moreira you mention that his mother remarried a guy called Anthony Cataldo, not an artist. Antony Cataldo is a signing artist with many credits on the GCD, some of which have been identified as having been inked by Moreira. Was Cataldo a pseudonymn for Moreira? Was there a relationship between them? Do you know? Could you find something in the records?

It’s hard to say if Cataldo had any artistic talent since his 1940 employment was department store mail-order clerk. Maybe Moreira brought Cataldo into comics. Or perhaps Moreira had some affection for Cataldo and used that name for a pseudonym.