News of Yore: The Brownies and Palmer Cox 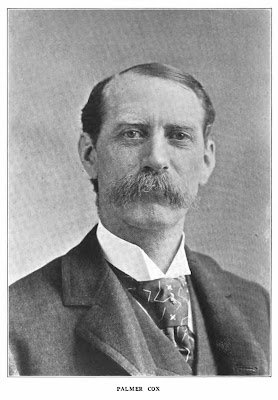 The Bookman
August 1908
Not only countless children, but very many grown persons as well, will be interested in the news that a new Brownie book, Brownie Clown of Brownietown, is to be published next month. in a way the publication may be regarded as a kind of anniversary, for the first Brownies made their appearance just twenty-five years ago. Palmer Cox has been asked on a great many occasions how he came to draw the little elfish creatures that have been so closely associated with his name. So the tale is not a new one; yet there are one or two details which we think are comparatively unfamiliar. Although Mr. Cox was forty-three years of age before he drew his first Brownie, he had heard of the strange people in his earliest childhood. He was born in Granby, Quebec, a Scotch settlement lying within sight of the Vermont mountains. The first settlers of this little Canadian colony had brought with them from Scotland much of the folk-lore of the Grampian Mountains. Of all the creatures that figured in the fairy tales which the women of Granby were wont to relate to their children, the Brownies had the greatest charm for the future artist. Despite their mischievous tendencies these Brownies were held to be the busiest and kindliest of sprites, whose aim in the world was to lighten the labor of tired housewives. They worked by night, each Brownie choosing some farm house whose mistress was noted either for her good disposition or her good looks. In certain regions of Scotland and Canada the superstitious still make it a habit to leave food on the table placed close to a window to induce the industrious Brownie to abide in the house over night.

Before he won recognition and success as the historian of the Brownies, Palmer Cox lived an adventurous and somewhat precarious life. At the age of seventeen he left his Canadian home and came to the United States with the intention of succeeding as a business man. After a few years he became convinced that the Eastern States did not offer sufficient opportunities, so he started for California. This was at the time of the Civil War, and as there were no transcontinental railways, Palmer Cox went to San Francisco by way of Panama. the journey being considerably enlivened by the pursuit of the vessel on which he sailed by a Confederate cruiser. In California Palmer Cox found employment in a railroad office, where he achieved no great amount of success. He already felt a strong leaning toward art, and the loss of several thousand dollars in a financial venture went far toward convincing him of his unfitness for a business career. The unfortunate loss leaving him without sufficient money to devote his entire time to the study of art, he turned to newspaper work. In San Francisco he wrote for the Examiner, the Gold Era and the Alta California, at the same time joining the famous sketching club, the Graphic, of which Benoni Irwin, the marine painter, was instructor. Among other members of the club at that time were Marjot, the French painter, Thomas Hill, and Bradford, later celebrated for his Arctic scenes. In San Francisco Palmer Cox remained until 1878, when he returned East and made his home in New York.

In telling of this period in the life of Mr. Cox, Malcolm Douglas, who later wrote the songs for the theatrical representation of the Brownies once said: “During this period of his life his animal drawings especially won the fancy of the critics and found an eager audience among the readers of Little Folks, Wide Awake, Harper’s Young People and St. Nicholas. Yet in depicting the humouristic side of the animal world he found that his work lacked that individuality which—he knew it must possess to attain true success. He saw that he must hit on something distinctive, that would make his creations stand out from those of other artists—something that bore the stamp of originality, that was all his own. For years he searched his mind for a new theme to which he might devote all his energies, and at last he bethought himself of the Brownies of his childhood. The idea came to him as an inspiration. All at once it occurred to him that these jolly little elves, who had endeared themselves to the children of his native village, although they existed only as formless creatures of the imagination, might be aptly portrayed in tangible face and figure and be made the heroes of exploits which, through the pages of periodicals, would win the affections of the little ones of the whole country. His belief proved true. The Brownies, which he first began to draw in 1883, when he was forty years old, became popular from the start.”

The International Who’s Who in the World 1912
H. L. Motter, Editor
International Who's Who Publishing Company, 1911
Cox, Palmer:
The Brownie man. Was born in Granby, Quebec, Canada, on April 28, 1840. The town is near the United States border, and from it may be seen the Greco Mountains and the Adirondacks. His father was a pensioner of the British Army, having seen service when a youth in the War of 1812. Early in life Palmer left home, and after a short stay in the Eastern States went to Lucknow, Ontario. After two years he drifted to San Francisco by the Isthmus of Panama, and followed railroading, but in the meantime contributed articles to the local papers, and after a few years his first book appeared. On being encouraged to return to New York and take up the pen and pencil for a livelihood, he reached that city in 1875. His articles for children attracted the most attention, and he took up that sort of literature as his life work, and it was not long until the Brownies made their appearance. The following books have been published: “Squibs of California,” later enlarged and rewritten as “Comic Yarns”; “Hans Von Pelter’s Trip to Gotham”; “How Columbus Found America”; “That Stanley”; “Queer People”; “The Brownies, Their Book”; “Another Brownie Book”; “The Brownies at Home”; “The Brownies Around the World”; “The Brownies Through the Union”; “The Brownies Abroad”; “The Brownies in the Philippines”; “The Brownie Primer”; “Brownie Clown in Brownie Town”; “The Brownie Year Book”; “Calendar”; “Portrait Gallery,” etc. Mr. Cox has also produced two Brownie plays, one a spectacular extravaganza, and the there a cantata for children. He has traveled extensively in America, and through Europe, visiting England, Ireland, Scotland, Holland, Belgium, Germany, Switzerland and France. Address, 134 W. 23rd St., New York City.


The Sun
(New York, New York)
July 24, 1924
Brownie Books’ Creator Is Dead
Palmer Cox Made Fortune by his Quaint Conceits.
Lived Long in This Country
End Came in the Canadian Town of His Birth.
Palmer Cox, the creator of those mischievous little elves, the Brownies, who have delighted children the world over, died to-day at his home in Granby, Quebec, according to word received by friends here. He was 84 years old and had only been ill for a short time.

His death brings up visions of hosts of drawings and stories of spindle legged, wide eyed figures, which constituted his “Brownie” series of books. Published between the years of 1893 and 1918, they became internationally known. They were illustrated as well as written by Mr. Cox

Death came to Mr. Cox in Brownie Castle, his famous home, which was the wonder of the village of Granby. Mr. Cox was born in Granby and was a graduate of the Granby Academy. In 1863 he went to San Francisco and engaged in literary work there. He was a born draftsman, always making pictures, in addition to writing.

His first book was published in 1875. Soon he came to learn that he was most successful at children’s stories. After publishing several books of children’s tales he bethought himself of the Brownies. Taking to definition from the Encyclopedia Britannica, he made his queer little characters conform to it.

“I found the Brownies were all males.” he said one day years ago. “I found they delighted in harmless pranks and helpful tasks and that they never held conversations with people. I found, too, that whatever tasks they began they must finish, and that whenever the sun’s rays struck one he lost his mystic power.”

And those were the characteristics of Palmer Cox’s Brownies. After he began to be famous with his little folk he cams to New York. Later in his life he returned to Granby and built his castle.

On his seventieth birthday all the children in Granby trooped to his home to pay their respects to the only “Granbyite” to ever win fame and fortune. Before they went they wrote him postcards containing their conceptions of the way he should have drawn the Brownies. During a big feast he had prepared for his little visitors the mail came in and the cards, with every conceivable form of Brownie pictured caused gales of merriment.

Cox never used a name for a single Brownie, but each was named by his character and was known individually. There was the Indian, the Scotchman, the dude, Uncle Sam, Eskimo, Irishman, Turk, student, policeman, sailor and many more, thirty in all.

Cox was six feet two in height and had broad and robust shoulders, and was anything but Brownielike. Once he was asked why he didn’t write of other things besides his Brownies. He replied:

The Canadian Encyclopedia
Palmer Cox, caricaturist (b at Granby, Qué, 28 Apr 1840; d there 24 July 1924). At the age of 17 Cox left Granby to work in Massachusetts (1857–59), Ontario (1860–63), California (1873–76) and New York City (1876–1904). He had published his first caricatures in California, but it was the appearance of the Brownies, elfin characters derived from Scottish lore, in the noted American children’s magazine St. Nicholas in February 1883,  that launched Cox’s career. He would publish 15 books of the Brownies’ adventures from 1885 to 1918 as well as numerous stories in St. Nicholas (1893–1914) and Ladies' Home Journal (1891–1910). The Brownies appeared in their own theatre company and on toys, games, porcelain, cutlery and numerous advertisements, the most notable product being the Brownie camera launched by Eastman Kodak in 1900. Cox retired to Granby in 1904, where he had constructed his Brownie castle.

Comments:
"Town Hall Tonight" by Harlowe R. Hoyt includes an account of a local production of a Brownies musical in 1896. Cox had written the book and lyrics; scripts, costumes and a director were provided in a package deal to the local church group.

Also, one of WWII-vintage "Moffat" books by Eleanor Estes has its small hero playing a game called "Find the Duke in the Palmer Cox Brownie Book", evidently still on library shelves at that late date. The "Moffat" books themselves are still in print.