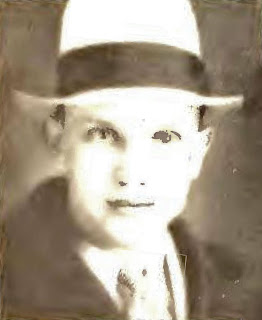 James Blakely Trapp was born in Oklahoma on August 15, 1905, according to the California Death Index at Ancestry.com. Trapp has not yet been found in the 1910 and 1920 U.S. Federal Censuses. Little is known about the first two decades of his life and education.

The 1930 census recorded Trapp in Wichita, Kansas at 139 North Market Street. He was married but his wife was not home at the time of the enumeration. Trapp was a U.S. Post Office clerk. In the mid-1930s, Trapp created the cartoon panel, Postal Oddities, for the Union Postal Clerk, official magazine of the National Federation of Post Office Clerks. Radio Mirror, August 1936, told how it began:


…Trapp enlisted the services of a friend, Ed McGlynn*, as cartoonist, and sent a sample installment of the Oddities, in cartoon form, to Gilbert E. Hyatt, editor of the Union Postal Clerk, which is the official monthly magazine published by the National Federation of Post Office Clerks. Hyatt published it at once, and asked for more.

The Journal of Electrical Workers and Operators, January 1936, explained how the cartoon spawned the radio version.


Post Office Clerks “Tells the World”
The other publicity feature of the Post Office Clerks’ Federation is a series of radio broadcasts under the title of “Post Oddities by Trapp.” This sets forth, in the fashion of Ripley’s “Believe It or Not,” curious facts concerning the postal service. Starting as a cartoon feature in the Union Postal Clerk, official magazine of the National Federation of Post Office Clerks, it was picked up by a radio station in Wichita, Kansas, as a feature. It made such a hit that its author, J. B. Trapp, a post office clerk in the Wichita office, and a member of the clerks’ federation, has been offered numerous other engagements.

The Richmond Times-Dispatch (Virginia), February 21, 1936, announced the upcoming radio broadcast of Postal Oddities and said the idea began with the strip by “Cartoonist Trapp.” Other newspapers referred to Trapp as the author.


Rochester Local No. 215, National Federation of Post Office Clerks, is sponsoring a broadcast through station WHAM of Rochester, which is entitled “Postal Oddities.” Every Saturday morning, from 8:15 to 8:45 o’clock Trapp will tell many stories and experiences in the postal service of interest to all users of Uncle Sam’s big communication business.

In 1937 the Brooklyn Daily Eagle (New York) carried Trapp’s column Postal Oddities. American Newspaper Comics (2012) said Postal Oddites began appearing in newspapers in the late 1930s. The panel was drawn by John M. Baer. A collection of Postal Oddities cartoons were published in a book by National Federation of Post Office Clerks in the mid-1940s. The panel continued into the 1940s. 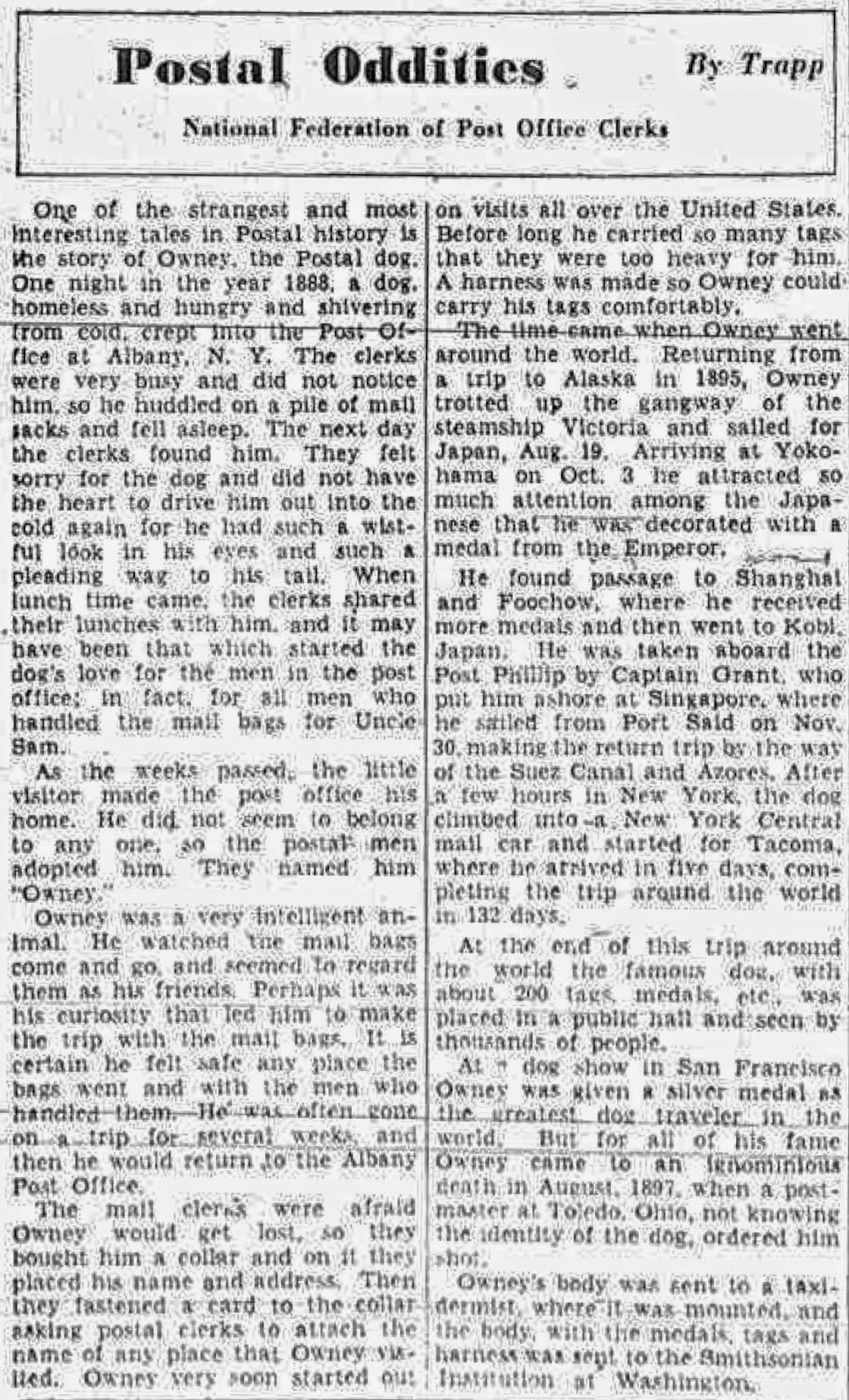 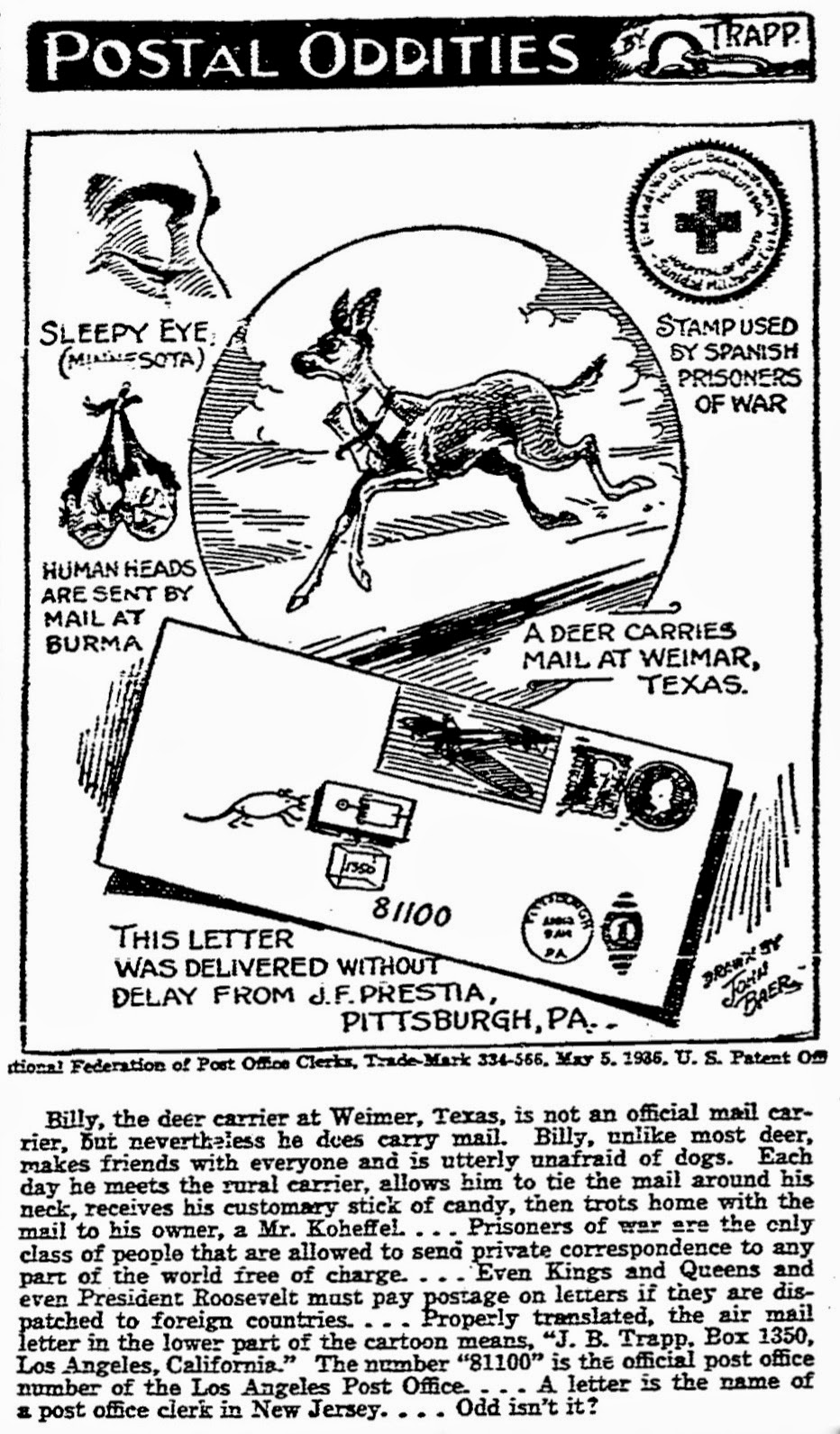 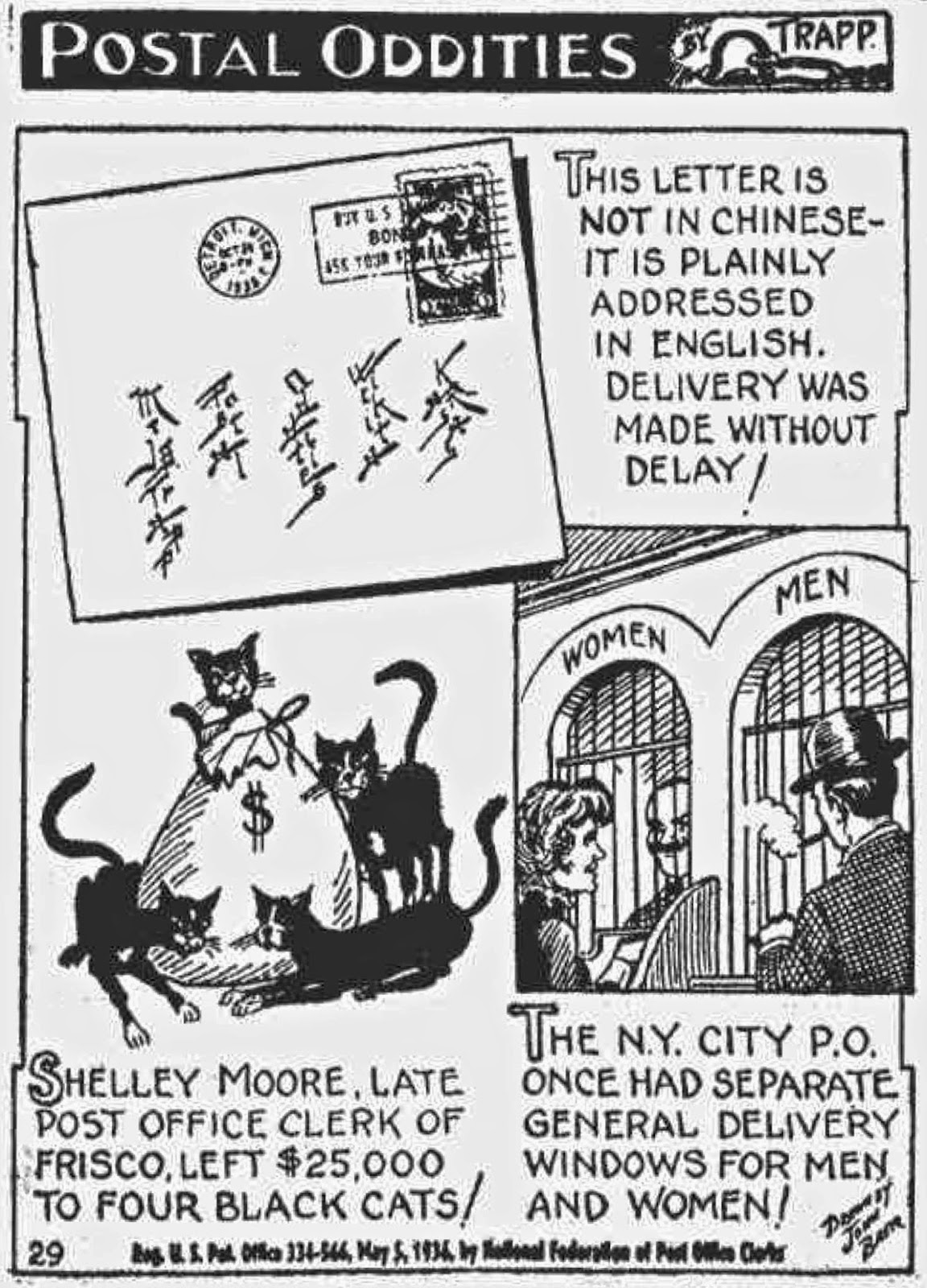 In the 1940 census, Trapp resided in Los Angeles, California, at 3619 West 59th Street. He had an eighth grade education and worked in the information department of the U.S. Post Office. His wife was named Bertha and daughter, Charlotte. Trapp served in the military but the record at Ancestry.com did not identify the branch.

Trapp passed away October 5, 1979, in Oakland, California, according to the California and Social Security Death Indexes.


* Edward Patrick McGlynn was born in Cheltenham, Missouri, on January 29, 1889, according to his World War I draft card. In the 1930 and 1940 U.S. Federal Censuses, his occupation was post office clerk. Evidently he was an amateur cartoonist when Postal Oddities appeared in the Union Postal Clerk. McGlynn passed away July 19, 1973 in Wichita, Kansas.