Enos Benjamin Comstock was born in Milwaukee, Wisconsin, on December 24, 1879, according the the Wisconsin Birth Index at Ancestry.com and his World War II draft card.

In the 1880 U.S. Federal Census, Comstock was the youngest of four children born to gardener Henry and Canadian-born Mary. They resided in Greenfield, Wisconsin.


…In what is now a populous part of Milwaukee’s residential south side, the boy’s home was on a huge celery farm with plenty of farm animals. The deeds to the Comstock homestead go back to 1846. The family was of Connecticut origin, notable among Milwaukee pioneers.…

…Comstock was a South Side high school boy whose prowess on the football field and the track won games and made records for his school. He always insisted that his high school art studies under Miss Alida Goodwin…provided the solid foundation that he relied on all of his life. Since his teacher was a graduate of the school of the Art Institute of Chicago, it was natural for young Comstock to go there after his high school graduation in 1898. After his graduation at Chicago came several years of study in France, Italy and Holland….

The 1900 census and 1905 Wisconsin state census recorded Comstock at Greenfield in his parent’s household. He was a student.

On June 22, 1905, Comstock married Frances C. Bassett in Chicago, Illinois, as recorded in the Cook County, Illinois, Marriage Index at Ancestry.com. The Journal said they met at school and traveled to Europe. The couple left Milwaukee in 1906 and moved to New York City. A postcard, postmarked August 15, 1907, was sent to Comstock’s wife at 556 West 186th Street in New York City.

According to the Journal, Comstock “wanted to paint pictures with story telling implications” and found work illustrating for magazines and books. His favorite genre was westerns.

According to the 1910 census, the couple and their son, Henry, resided in Englewood, New Jersey on Lake Street. Comstock’s occupation was illustrator, and Frances’ artist.

Comstock signed his World War I draft card on September 12, 1918. His address was 178 Highwood Avenue in Leonia, New Jersey. The self-employed artist was described as tall, medium build with light brown eyes and black and gray hair. The Comstocks were at the same address in the 1920 census.

Mrs. Frances Bassett Comstock, an artist, wife of Enos B. Comstock, also an artist, died yesterday of pneumonia at her home in Leonia, N. J. She was 41 years old.

A History and Genealogy of the Comstock Family in America (1949) said Comstock married Nellie Juline Warner on August 13, 1924.

The 1930 census said the occupations of Comstock and son, Henry, were artists, illustrators and authors. During the 1930s, Comstock illustrated Lena B. Ellingwood’s Cubby Bear which appeared in the periodical, Comfort. 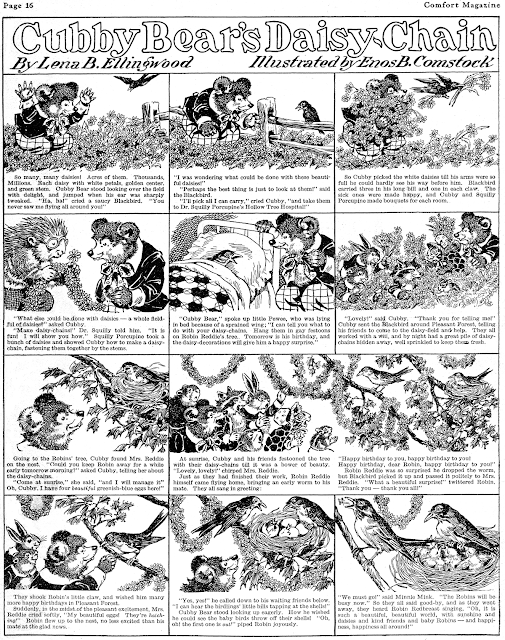 Comstock’s address in the 1940 census and on his World War II draft card was 176 Highwood Avenue, Leonia, New Jersey. He was a self-employed artist whose description was six feet, 190 pounds with hazel eyes and gray hair.

A History and Genealogy of the Comstock Family in America said Comstock passed away March 19, 1945, in Leonia, New Jersey.