John Miller Baer was born in Blackcreek, Wisconsin, on March 29, 1886. Baer’s full name was on his World War I draft card and his birth information was recorded in the Wisconsin Birth Index at Ancestry.com.

In the 1900 U.S. Federal Census, Baer was the son of John and Libbie. His father was a store manager. They resided in Appleton, Wisconsin at 443 State Street. Information about Baer’s art training has not been found. The 1905 Wisconsin state census recorded the return of Baer’s older sister, Addie.

According to the Syracuse University Libraries’ profile of Baer, he graduated “from Lawrence University in Appleton, Wisconsin in 1909,…moved to Beach, North Dakota…[and] worked as a civil engineer, a farmer and postmaster and began submitting cartoons and articles to newspapers.” The Bismarck Daily Tribune (North Dakota), January 17, 1914, published Baer’s drawings of several newsman.

Baer has not been found in the 1910 census. The biographical sketch at the Elwyn B. Robinson Department of Special Collections, Chester Fritz Library, University of North Dakota, said Baer married Estella G. Kennedy, on December 28, 1910.

Baer, his wife, Della, and son, John, were recorded in the 1915 North Dakota, Territorial and State Census. They lived in Beach. Syracuse University Libraries said he resigned as postmaster in 1916, relocated to Fargo and was the Courier-News cartoonist. Baer entered the race for a Congressional seat in the House of Representatives. An advertisement ran in the Wahpeton Times (North Dakota) July 5, 1917. Baer’s victory was reported in many newspapers including the Bismarck Tribune, July 11, 1917; the Ogden Standard (North Dakota), August 16, 1917; and the Broad Ax (Salt Lake City, Utah) September 8, 1917. 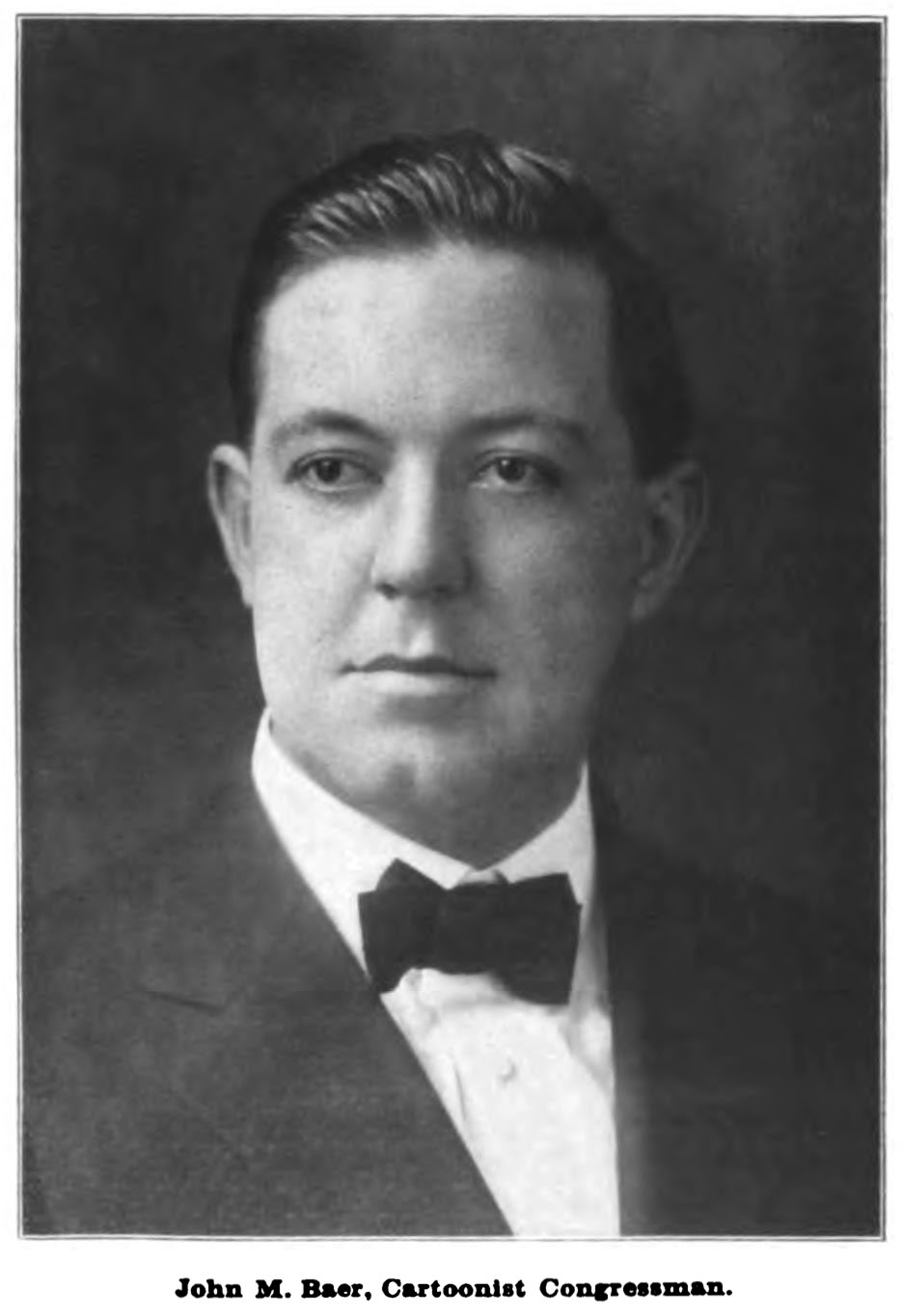 Around 1918, Congressman Baer signed his World War I draft card. He was a Fargo, North Dakota resident. The description on the card said he was tall and stout with brown eyes and black hair. In 1918 Baer began his reelection campaign with advertising in newspapers such as the Wahpeton Times (Washington), October 17, 1918.

According to the 1920 census, Congressman Baer remained in Fargo with his wife and three sons. The New York Times, July 3, 1920, said Baer lost his re-election bid.

Baer continued cartooning and moved to Washington, D.C. The 1929 city directory listed Baer at 630 Allison N.W. and cartoonist at the Labor Co-operative Educational and Publishing Society. 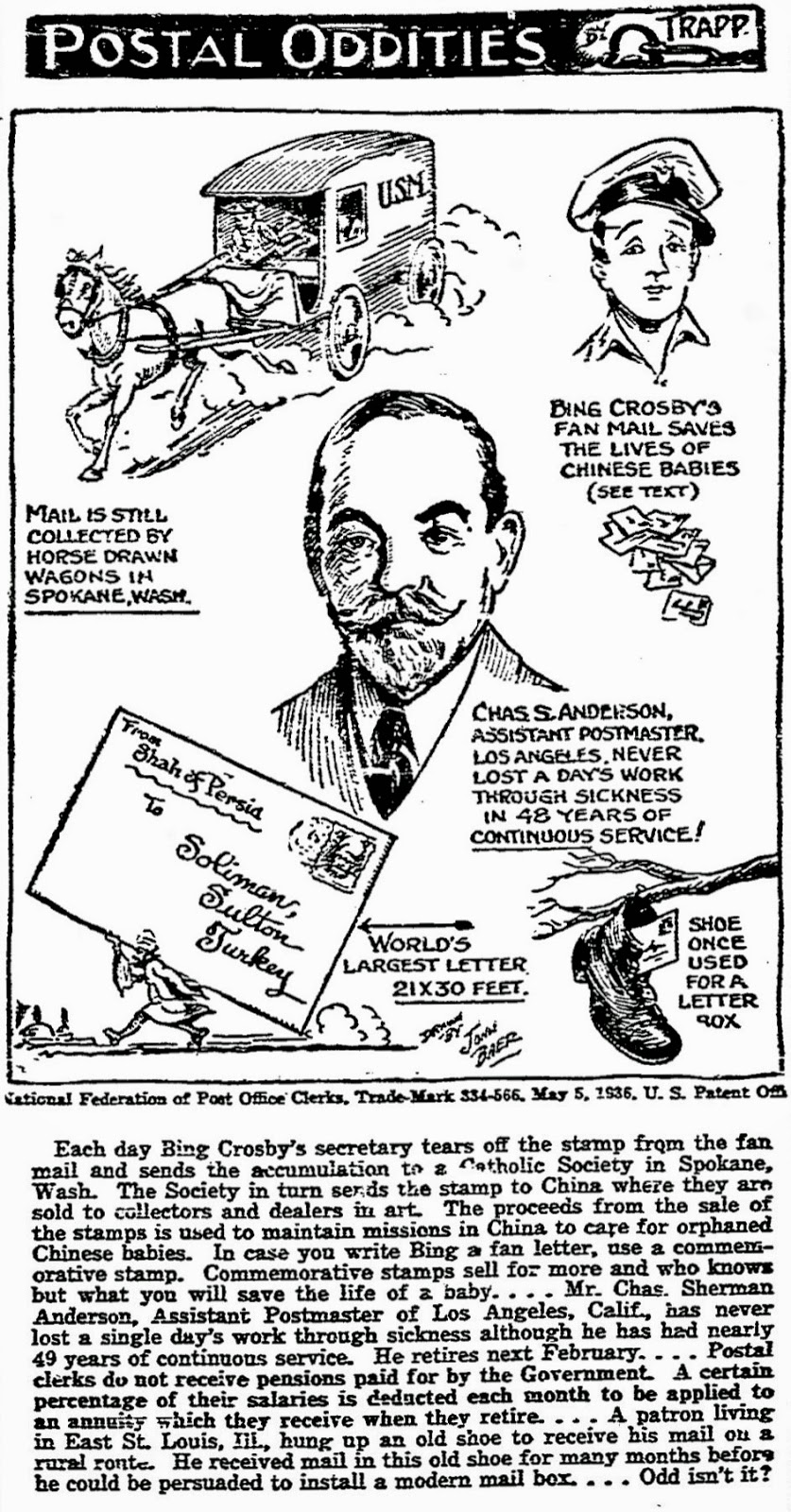 According to American Newspaper Comics, in the late 1930s, Baer drew the panel, Postal Oddities, which was written by James B. Trapp. A 1941 report from the National Federation of Post Office Clerks said: “…I recommend also that this convention adopt a resolution commending Honorable John Baer for his work in production of the Postal Oddities cartoons.”

The 1958 Silver Spring, Maryland city directory listed Baer at 3809 East West Highway. He was a commercial artist at the Labor Co-operative Educational and Publishing Society. The 1960 directory had the same address for Baer who was a cartoonist at the Union Label Trades & Labor Newspaper.

A family tree at Ancestry.com said Baer passed away February 18, 1970, in Washington, D.C. He was buried at Gate of Heaven Cemetery.

Comments:
Baer drew several cartoons for the Non-Partisan Leader of Fargo before and after his single term in Congress, and for its successor newspaper, the National Leader (Minneapolis) after that. Both papers are available at the Library of Congress's chroniclingamerica.loc.gov archive.

Baer also drew for Labor, the journal of the National Railroad Union, in the 1920s.