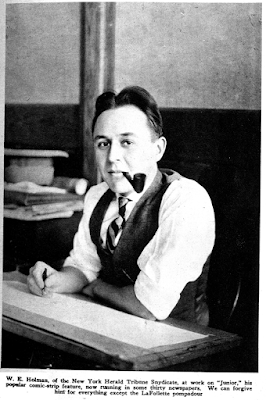 Bill Holman Spills the Beans about Himself

When the editor of "Cartoons" asked me for an account of myself since I started in the cartoon game, you can bet I had to stop and think before grabbing a pencil.

Getting down to brass thumb tacks, Indiana is the state of my birth and where I spent my boyhood days  -- which I can truly say were real ones. Somewhere around my fourteenth birthday the folks decided for no reason at all that Chicago was the place for us to live, so then we moved -- and at that time the cartoon bug hit me. I'll probably never recover. Advancing to my third year in high school and, at the same time attending the academy of fine arts I broke into the art department of the Chicago Tribune in the capacity of office boy -- which looked like a much bigger job to me than that of managing editor.

This opportunity came through a tip from Quin Hall, my teacher at the academy, who was then sports cartoonist at the Chicago Daily News, and who has recently joined the King Feature Syndicate in New York City.

My job as office boy was a short one for I took advantage of every opportunity and less than a year later really surprised myself when I sold my first full page idea to a nationally-known magazine, then published in Chicago. I lost no time in parading this before Bill Wisner, my boss, and art manager, -- and was again surprised when I was called on the green carpet and not fired but given a job on the art staff, where I remained for the next two years illustrating comic stories, assisting Frank King on Gasoline Alley, and everything else pertaining to the work in an art department. Unable to land a feature on that paper at that time, I continued to mail my drawings to various other syndicates and newspapers with the result that I connected with the Newspaper Enterprise Association.

During my several years as one of their comic artists, I drew a number of features, the most original and popular being a strip called Billville Birds., which received quite a run. However, it was handicapped by the fact that the human angle was missing -- which is essential to put a thing over nowadays. Up to this time everything was running smooth except for my being gently eased out because of various fights over ideas that didn't end in a draw.

Having a little ready cash on hand, I packed my ink pen and pencil, along with three features I had worked up and several mornings later woke up in the world's largest city, generally referred to as New York. It was several days before I got my bearings  -- and when I did, I set out to see the Woolworth building. While roaming around in that section I dropped in on several syndicates in Park Row, where I met and had quite a talk with the N.Y. Tribune Syndicate manager -- joining this organization a month later, drawing Junior, a daily feature that in the past three years has steadily climbed and enabled me to work with such men as Briggs, Voight, Winsor McKay (sic), Ted Brown, Ding, McBride, and last but not least, Pete the Bootlegger.

My advice to young men with ambitions to become cartoonists is based on my own experience -- and that is to get into any art department where the work is being done, if only as office boy -- draw continually -- always be open to criticism -- try at all times to get your work in print and once you get a feature before the public half the battle is won. I have noticed "Cartoons" has done a lot to encourage amateurs, not only by publishing their work, but by printing interesting pictures, features and articles about those whose work you see daily.

In regard to correspondence schools, I think them a huge asset, as they enable one to learn the fundamentals of comic art -- but as for teaching you to get ideas, they are out of the question, for one must be born with a sense of the comic -- and that can only be developed through hard work.

I am a personal friend of C.N. Landon, of the Landon School; have been through his plant and advise his course.

One of the best books published in years that no one in or out of the cartoon business should miss is "How to Draw Cartoons," written by Clare Briggs of this paper. It should be especially helpful to amateurs.