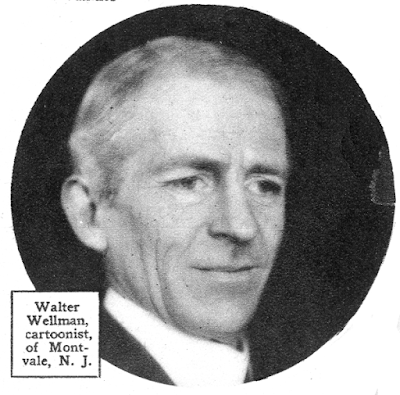 Walter Wellman was born in Dublin -- in Dublin, New Hampshire, May 25, 1879. Had it been Dublin, Ireland, things would probably have shaped up differently, for he would have become a policeman, or a politician. As it was, he became a cartoonist -- but we're getting ahead of our story. Passing over the earlier years, he entered Murdock High School, Winchendon, Mass., in 1896, and graduated at the head of his class in 1898. He then entered Massachusetts Institute of Technology, choosing the course in architecture.

During the four-year course at M.I.T., Wellman became the art editor of the weekly college publication, The Tech, and held that position for the last two years of his course. As art editor of this publication, he designed the special covers, and furnished most of the matter for the rest of the magazine. He also contributed to the annual publication of the college.

It was during the course in architecture in Boston that he met and became acquainted with one of the editors of The Boston Globe. Through this connection, he began producing picture puzzles for The Globe, and these were the first drawings actually sold by him. On graduating from Tech in 1902, as a full-fledged architect, it was natural to suppose that he would start designing such structures as the Woolworth building, but no! That editorial position on The Tech and the work for The Boston Globe had shown him a more congenial field. Life class was a part of the training at Tech, and that also stimulated the desire to draw pictures for a living.

During the summer of 1902, he started shooting comic "pitchers" to Life and Judge and Puck. Life, Judge and Puck reciprocated, and shot 'em right back. Finally, in desperation, he wrote to a school of caricature in New York and mailed some of his work. The reply was surprising. It advised that the work was salable, and urged Mr. Wellman to come right on. Packing a bottle of India ink and a pair of pajamas and a little cash, Wellman started for the big town. At the end of three weeks, he still had the pajamas.

Shortly afterward he landed his first work, and was soon contributing, as a free lance artist, to most of the daily papers published at that time. He was soon contributing a daily comic strip to The World, and Sunday pages to the colored comic sections of The Boston Globe and The Boston Herald. At about that time he also connected with The International Syndicate, and has been selling them his work regularly ever since. 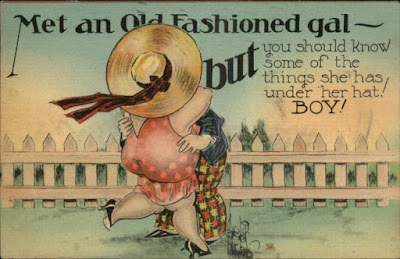 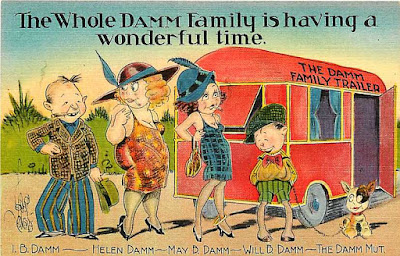 In 1905 Walter took an office in the World building, New York, and started designing comic postcards for the larger publishers, and soon started publishing his own designs as postcards. At that time the demand for comic postcards was very large, and many editions of cards ran to several millions. During this time, he kept on with his newspaper and magazine work. When the bottom fell out of the postcard business, he again gave his entire attention to cartooning.

After spending about ten years in New York, he built a home in Montvale, N.J., and has been there ever since. During the last several years, he has probably designed many comic greeting cards, and most of the largest publishers of greeting cards look to him for new material every year. During the last year he has added a line of stock cuts of his own designs, and the business in this line is growing month by month. The stock cuts are being used by house organs, plant publications, advertising agencies, printers and in direct mail material all over the country and in Canada. Competition in the stock cut game is very keen, however, and one must have exceptional cuts to get away with it. Mr. Wellman's line now consists of hundreds of snappy little cuts.

Wellman states that, at the time he started in the comic game, women actually wore clothes, and it was comparatively easy to draw the flapper of 1899. His study of anatomy came in very handy, he says, when the ladies started to discard. He has followed the flapper through many evolutions, and has always tried to keep he just a little ahead of herself all during that time. It has now reached the point, however, where he has got to let her catch up before he dares to go ahead.

Walter seldom visits the big city now, as his work is practically all done through correspondence, and his kept so busy that it is next to impossible to get away. Over his two-car garage, he built a studio last year, and now does all his work there. He also handles his stock cut business from this office. He is married and has a bull terrier and a cat, and is living the life of Reilly in the hills of northern New Jersey. He has consistently refused to tie himself down to a cartoonist's job, preferring to free lance, and be his own boss.