Alexander Wilson “Alex” Kurfiss was born in Kansas City, Missouri, on November 16, 1900. His full name and birth information were found in a family tree at Ancestry.com. According to the book, Christopher Reynolds and His Descendants (1959), Kurfiss’s parents were Shelby Harney Kurfiss and Addie Brown Smith.

Student Kurfiss and his architect father were listed in the 1909 Kansas City, Missouri city directory. Their home address was 2114 Amie.

Kurfiss had the same address in the 1910 U.S. Federal Census. He was two years older than his sister, Virginia. Kurfiss attended Northeast High School and was in the class of 1918. A photograph of him was found the 1916 school yearbook, The Nor’easter. 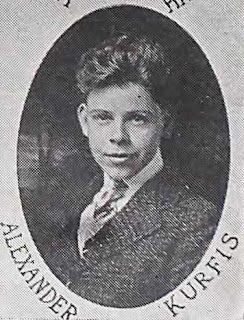 The family tree said Kurfiss attended Kansas City Art Institute in 1918. The following year Kurfiss was a student at the University of Kansas.

The 1918 Kansas City, Missouri city directory said the Kurfiss family resided at 320 North Chelsea Avenue. They were at the same location in the 1920 census.

The alumni page in the 1922 Nor’easter yearbook said: “Alex Kurfiss, ’18, is doing art work at the Kansas City Journal.” Also in 1922, Kurfiss was hired by Walt Disney. The Jackson County Historical Society Journal, Summer 2014, published “The Roots of Animation in Kansas City” which reproduced a March 1922 classified advertisement from the Kansas City Star:

The article said Disney hired five young men of various backgrounds including “a trolley motorman, a baker, and a draftsman. Three of the five animators he hired had drawn cartoons for their high school yearbooks” About Kurfiss, it said “he had worked as a meter reader for Kansas City Power & Light.”

In the book, Walt Before Mickey: Disney’s Early Years, 1919–1928 (2011), Kurfiss’s role at Disney was described by Rudy Ising who said Kurfiss was “a successful commercial artist, but [at Laugh-O-gram] did mostly the posters; we used to make a poster for each one [of the shorts].” Kurfiss’s printed signature was on the Laugh-O-gram Little Red Riding Hood poster.

The 1924 city directory said Kurfiss was an artist at the Kansas City Star. His occupation was artist in the 1925 directory. The 1927 listing had Kurfiss as an architect at the firm W. E. Gillham. In all three directories, his address was 320 North Chelsea Avenue.

Kurfiss has been credited as the artist of the comic strip, The Connoisseur, which was recorded in the Official Gazette of the United States Patent Office, December 13, 1927:


Ser. No. 256,493. Standard Publishing Company, Chicago, Ill.
Filed Oct. 22, 1927.
The Connoisseur
Particular description of goods. — Fashion Strip and Cartoon Published in the Form of a Mat to be Used in Newspapers for Advertising Purposes.
Claims use since Sept. 5, 1927.

The Connoisseur ran in the Philadelphia Ledger from November 21, 1927 to December 8, 1928. The strip also appeared in the Greensboro Daily News (North Carolina) in 1928.


Kurfiss’s marital status was divorced in the 1930 census. He continued to live with his parents. At some point, he moved to Chicago.

According to the Christopher Reynolds book, Kurfiss’s first wife was Fleda Wamsley. They married around 1923. The 1930 census recorded Wamsley and her six-year-old son, Robert Kurfiss, at 429 Tenth Place in Kansas City, Missouri, which was the home of her parents.

The family tree said Kurfiss graduated from the Chicago Art Institute around 1935. Kurfiss was in Chicago during the 1940 census. He resided at 838 Dearborn Street and was a commercial artist. Later that year Kurfiss married Margery Maud Knapp.


In 1941 the couple lived on a farm in rural Minnesota. The family tree said they made their home “in an 1860s farmhouse on 80 acres of land” in Blue Springs, Missouri, from 1948 to 1980. Walt Before Mickey said: “Kurfiss worked as a commercial artist and his wife Marjorie was a schoolteacher.”

Their unnamed son was born November 9, 1948 and did not survive.

According to Walt Before Mickey, “the couple retired to Marjorie’s native Iowa…” Kurfiss passed away December 29, 1983, in Westfield, Iowa.