Clyde Gordon Yeadon was born in Bark River, Michigan, on July 13, 1909, according to a family tree at Ancestry.com. His parents were James Williams Yeadon and Mary Ellen Boutilier, both Canadian emigrants.

In the 1910 U.S. Federal Census, Yeadon was the youngest of six children. They resided in Bark River where their father was a farmer.

Ten years later Yeadon and older brother, Benjamin, who worked at a lumber camp, were in their parent’s household. They lived in Hudson, Michigan. A 1928 Grand Rapids, Michigan, city directory listed Yeadon at “127 Mt Vernon av NW”. He was a clerk at The Illustrated Service.

The 1930 census said Sagola, Michigan was the home of Yeadon and his father, a widower. Both worked at the lumber mill. On June 5, 1931, Yeadon married Rose Mary LaCost at Crystal Falls, Michigan. At the time both were residents of Iron Mountain, Michigan, according to the Michigan Marriage Records at Ancestry.com.

Editor & Publisher, September 4, 1948, profiled Yeadon and told of his early love of cartooning.


A love of drawing, first fulfilled with strips of charcoal from burnt stumps, won him his first cartoon publication at the age of 11 in St. Ignace newspapers. He amazed lumberjacks and took a place among them as mascot by illustrating their stories as they told them. But there were rude shocks in store for him before The Mighty Bunyan took life on the pages of daily newspapers.

At 16 he took a job in the slab-wood yard and put his first earnings into a correspondence course in cartooning.

Opportunity knocked early—he thought. A Fond du Lac, Wis., candy company offered a $200 prize for the best cartoon. He tucked his drawing under his arm and went to the candy company to collect the prize.

The company accepted a number of the drawings, and Yeadon went home to wait for his prize. It came about a month later in the mail—a check for one dollar. The major prize went to Pat Sullivan, creator of “Felix the Cat.”

Yeadon felt he had lost face in his hometown. Joined a carnival and was soon made into a chalk-talk artist. When the ventriloquist quit the sideshow, Yeadon manufactured a dummy out of beaver board and took over.

The show went broke and Yeadon was stranded.

Back home in Michigan he tried again and again with his drawings. Rejection slips were the result. Then his mother died and Clyde, youngest of 14—eight lumberjacks and five sisters—took his father to his home at Iron Mountain.

It was not until 1936 that Clyde was able to attend art school in Chicago. Meantime, he had acquired other responsibilities, a wife and eventually as many daughters as Eddie Cantor.

After the second year of training Yeadon sold “Stubby [sic] and Trinket" to a New York comic book publisher. [Stubbie and Trinket were separate features. According to Who’s Who of American Comic Books 1928–1999, the characters were together in 1940s Dell comic books.] He drew this feature for 18 months. The firm disintegrated and Yeadon lost several months’ pay, but was not discouraged. He felt the publisher had given him his first real break.

The 1940 census recorded Yeadon, his wife and two daughters in Kingsford, Michigan, at 308 Dickinson Boulevard. He was a self-employed sign painter. Editor and Publisher explained Yeadon’s interest in Paul Bunyan.


His daughter illustrated a Bunyan lecture at school with her father's drawings and reopened his eyes to the possibility of “The Mighty Bunyan.’

He started drawing again. His attorneys said he could never get a trade mark because Bunyan was a legendary figure. But after the panel ran in series for a year in 40-odd papers, he got the trade mark and Bell Syndicate got the material.

To Dot Yeadon, his wife, he owes something for his start. Yeadon had earned his living for several years as a sign painter. Mrs. Yeadon led with her chin. She ran the Yeadon Sign Shop and told her husband to go ahead with his dream. “This,” she told him, “is what you've always wanted. From now on I’ll take over the sign shop.”

Mostly, his drawings gathered dust in his Iron Mountain workshop, where he produces the polished continuity of today.

He needed publicity. So he discovered the Paul Bunyan Diar-ee. It was found in Iron Mountain after weeks of search. Yeadon finally came upon it by following hodad tracks into a cave. It required 45 lumberjacks and boom and tackle to open the cover. Disappointment was supreme. The diary was written in oomph-phang, a sort of baby-babble.

It was at this juncture that newspaper stories on the diary led Les Kangas, then a University of Michigan student and now a public relations whiz, to Yeadon. Kangas could translate. Kangas could read oomph-phang. The combination is terrific, and The Mighty Bunyan received its final necessary accretion.

Yeadon took a number steps to secure his cartoon creation. His Ol’ Paul Bunyan cartoon, printed in The Iron Mountain News, May 7, 1947, was copyrighted. Also in May 1947, he copyrighted two The Mighty Paul Bunyan strips.


The Official Gazette of the United States Patent Office, May 18, 1948, showed Yeadon claimed usage of The Mighty Bunyan, since June 6, 1947, and filed with the Patent Office on September 23, 1947. Yeadon made two more copyright applications, in 1948, for “Designs and plans for construction of proposed ‘Paul Bunyan’ figure.” and a drawing published in the Powers-Spalding Tribune, November 5, 1948 (probably the same one shown above from the Winnipeg Tribune).

Editor and Publisher said The Mighty Bunyan dailies began October 11, 1948 in Michigan papers [Allan sez: but that date was probably wrong; see my post about The Mighty Bunyan]. The Mighty Bunyan Sunday ran in the Milwaukee Journal (Wisconsin) beginning February 13, 1949. (Enter 127 in the page box.) The Sunday strips were also copyrighted. Ger Appeldoorn has collected the Sundays on his blog. 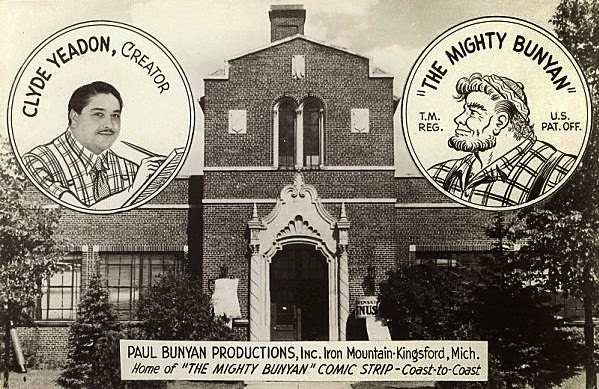 The family tree said Yeadon passed away July 8, 1955, in Iron Mountain. He was buried at Channing Cemetery, in Channing, Michigan.

Comments:
I went to school with his son, Paul Bunyan Yeadon in Kingsford,MI class of 1969