Sheldon Hubert “Shelly” Stark was born in Brooklyn, New York, on September 7, 1909. Stark’s full name was found in a family tree at Ancestry.com and the Brooklyn Daily Eagle newspaper. His birth information was recorded in the New York, New York Birth Index also at Ancestry.com.

The 1910 U.S. Federal Census, recorded Stark in Brooklyn at 1044 40th Street. He was the youngest of two sons born to Abraham, an attorney at law, and Olga, both Russian emigrants.

Stark’s home in the 1915 New York State Census was in Brooklyn at 1456 55th Street. Two more sons had joined the Stark family.

According to the 1920 census, Stark resided with his parents and four brothers (Malcolm, Elliot, Wilbur and Richard) at 1430 49 Street, in Brooklyn. The family was at the same address in the 1925 state census. Stark had a sister named Margery.

In the book, On His Own Terms: A Life of Nelson Rockefeller (2014), Rockefeller and Stark were classmates and friends at “Lincoln School. An offshoot of the Teachers College of Columbia University….” After graduating Lincoln School both of them attended Dartmouth.

The Jamestown Post-Journal (New York), January 30, 1954, profiled Stark and said: “When Sheldon Stark was not playing basketball, soccer or lacrosse at Dartmouth College, he was specializing in physics and chemistry and won for himself a science degree.”

Stark attended the wedding of Rockefeller and Mary Todhunter Clark on June 23, 1930.

New Fun Magazine for Juveniles Out

New Fun is the title of a juvenile magazine that appeared for the first time today on the newsstands of the principal cities throughout the United States, according to an announcement made by Malcolm Wheeler-Nicholson, president of National Allied Publications, Inc., 49 W. 45th St.

Major Nicholson has secured the co-operation of The Eagle for the publication of this tabloid-size monthly periodical which is designed to please “boys and girls from 2 to 90” with its predominant pictorial contents of new comic strips and special departments devoted to aircraft, sports, the radio and the movies.

Lloyd Jacquet, formerly on the staff of The Eagle, is the editor of New Fun, which is to be converted from a monthly to a weekly in the near future. He is assisted by Sheldon H. Stark as cartoon editor. Dick Loederer, who was art director in charge of animated cartoons for Van Beuren-RKO Film Corp., is art director of New Fun.

Stark’s marriage was reported in the Brooklyn Daily Eagle, July 20, 1935.

Miss Margery Hamilton Winchell, daughter of Mrs. Walter Barnard Winchell of 137 Berkeley Place and the late Dr. Winchell, was married this morning to Sheldon Hubert Stark, son of Mr. and Mrs. Abraham I. Stark, in the Supreme Court Chambers, with Justice John MacCrate performing the ceremony. A wedding breakfast for the immediate families and close friends, followed at the Hotel Bossert.

The bride is a graduate of Adelphi Academy, class of ’29, and Smith College, class of ’33.

Mr. Stark was graduated from the Lincoln School of Teachers College with the class of ’26 and from Dartmouth College, class of ’30.

Apparently, Stark and Margery went to Bermuda for their honeymoon. A passenger ship list recorded their return from Bermuda on August 5, 1935. Their address was 137 Berkeley Place, Brooklyn, New York.

According to The Billboard, February 13, 1943, Stark resided in Detroit, Michigan, where he scripted a number of radio programs.


Sheldon H. Stark, who has been in Detroit for the last four years writing for Lone Ranger, Green Hornet, Ned Jordan and Federal Ace, will return to New York in April at the conclusion of his contract.

In 1952, Stark was accused by Paul R. Milton, a founder and director of Aware, Inc., of being pro-Communist. Stark lost his writing job on the radio show “Treasury Men in Action.” Milton became a writer on that show. The New York Times, June 16, 1962, reported John Henry Faulk’s libel suit against Aware. Faulk was a CBS entertainer who lost his job in broadcasting after being linked, by Aware, to a Communist conspiracy. During the trial Milton “testified that he had made the charge against Mr. Stark, who shortly afterward was dismissed as a writer for a radio show sponsored by the Borden Company. Mr. Milton subsequently became a writer for the show.”

Stark “pointed out that he was cleared of the charge by a Government loyalty board in 1955.”

In a letter to The New York Times, Mr. Stark, who lives in California said:

“Those were hysterical times. In the three years it took me to catch up with and refute Mr. Milton’s false charge I suffered monetary and emotional damage from which, while not as great as that suffered by many, many others, I still bear scars.”

“Jet Scott” was a daily and Sunday comic strip written by Sheldon and drawn by Jerry Robinson and produced for the New York Herald-Tribune. According to American Newspaper Comics, the strip began September 28, 1953 and ended September 25, 1955. 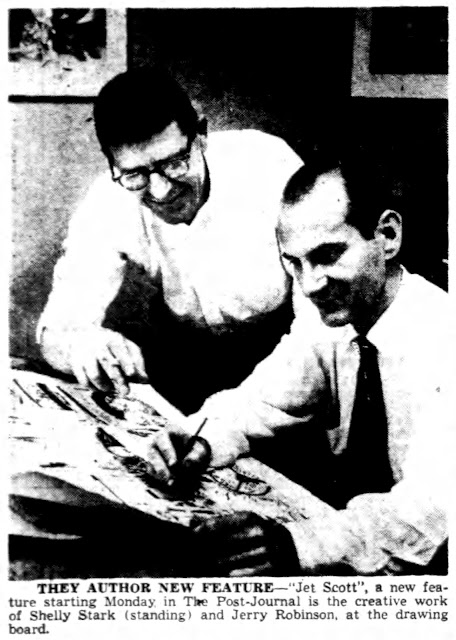 
…As much of his time as possible has been spent outdoors making frequent scientific field trips to places like Hudson Bay, the Mohave Desert and Macchu Pichu, Peru. He is a tophand with a gun and holds a pilots license.

In recent years, he has written more than 3,000 scrips for such popular radio and television programs as “The Lone Ranger,” “Straight Arrow,” “The Lux Theater,” “Studio One,” “The Big Story,” “The Ford Theater,” “Theater Guild on the Air,” “Grand Central Station” and “Rocky King, Detective.”

For over eight years, the writers of America have elected him to serve on the council of the Authors’ League of America, a board which concentrates on writers’ problems. Other council members include Oscar Hammerstein II, John Hersey, Rex Stout, Howard Lindsay and Russell Crouse.

Mr. Stark lives, with his wife and four children, a dog, a cat, some rare cross-bred songbirds and scores of tropical fish, near the shore of Long Island where he pursues another favorite interest, fishing.

According to the New York Times, January 27, 1954, Stark’s play, “Time of Storm”, would open on at the Greenwich Mews Theatre on February 18. The Brooklyn Eagle’s review of “Time of Storm” appeared February 25, 1954.

Stark’s 1954 crime novel, Too Many Sinners, was published in the Ace Double-Mystery Series.

The California Marriage Index, at Ancestry.com, said Stark married Jacquale M. Murphy on June 1, 1966. The date of Stark’s divorce from Margery is not known.

According to the California Death Index, Stark passed away February 6, 1997, in Los Angeles, California. His death was included in Obituaries in the Performing Arts (1997):


Screenwriter Sheldon H. Stark died in Los Angeles on February 6, 1997. He was 87. Stark began his career writing for radio, scripting episodes of such adventure series as The Lone Ranger, Green Hornet and Batman. He began writing for television in the early 1950s, scripting episodes of such series as Wagon Train, Ben Casey, Hawaiian Eye, Batman, Green Hornet, The Man from U.N.C.L.E., The Virginian and Quincy. Stark also wrote the 1954 play Time of Storm and authored the novel Too Many Sinners.

The Los Angeles Times obituary said: “…Stark helped form the Radio Writers Guild, which later merged with the Writers Guild of America, and held several offices in each organization. He taught screenwriting at UCLA and Santa Monica College.”

Stark, who was blacklisted in the early 1950s, wrote the Off Broadway play “Time of Storm,” which explored the dangers of McCarthyism.

…He is survived by his wife, Jacquie, as well as a brother, a sister, two sons, a daughter and eight grandchildren.