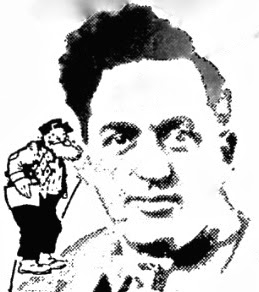 Oscar Samuel Hitt was born in Nottingham, England, on March 22, 1892, according to his World War I draft card which had his full name. Lambiek Comiclopedia said “Hitt was an American cartoonist of German descent…” International Journal of Comic Art, Volume 10, Issue 2, 2008, said Hitt was a German cartoonist.

The 1901 England census recorded Hitt in the household of Oliver Altree, his maternal grandfather. Also listed was his mother, Edith, one-year-old sister, Beatrice, and uncles Percy and Alfred. On September 26, 1901, Hitt and his mother sailed from Liverpool to Boston, Massachusetts. They were on their way to Salt Lake, Utah. It’s unclear how long Hitt stayed in Utah.On June 5, 1917, Hitt signed his World War I draft card. His address was 4832 Winthrop Avenue, Chicago, Illinois. Hitt was a Chicago Herald artist who was married and had a child; the names are not known.

After a lingering illness extending over a period of nearly five months, William Powe, a pioneer resident of Salt Lake, died at his home, 171 Third East street, late yesterday afternoon.

Mr. Powe came to Salt Lake from England twenty-six years ago, and had been engaged as a hatter in this city ever since. He was connected for some time with the firm known as the Taylor Hatters, but in late years had been in business for himself.

He is survived by a widow and stepson, Oscar Hitt.

Hitt has not yet been found in the 1920 U.S. Federal Census. According to the Ogden Standard-Examiner (Utah), Hitt was a cartoonist in New York City.


Oscar Hitt, noted cartoonist, of New York, was a guest during the early part of the week at the residence of Mr. and Mrs. V R Reeder, Jr. Mr. Hitt will Join his wife at Springvllle. Mr. and Mrs. Hitt are to spend the summer in Utah. They will visit frequently in Salt Lake and Ogden.


Mr. and Mrs. Hitt of New York are spending two weeks at the Virginia. Mr. Hitt is connected with the New York Times


Oscar Hitt, cartoonist for the New York World, pleased the guests with cartoons which he drew upon large sheets of paper in view of his audience. Miss Fay King offered vocal selections.

During the 1920s, Hitt drew Captain and the Kids; Ever Since Adam; Seezem and Sqeezem; Ambitious Ambrose; Hi-Way Henry; Uncle Eph Says; Wally and His Pals; and Mack and Marx (credited as Sam Hitt).

In the 1930 census, Hitt lived alone in Manhattan, New York City, at 48 West 70th Street. The whereabouts of his wife and child are not known. He married at age 23 and was naturalized. His occupation was newspaper comic artist.

Hitt’s longest running series was Neighborly Neighbors which spanned from March 17, 1930 to August 27, 1938. It was one of several new cartoons introduced in the Sarasota Herald (Florida), on March 16, 1930. (Editor & Publisher, February 8, 1930, was first to announce the lineup.)

Hitt went on a short voyage from February 29 to March 3. The passenger list said his home was the Hotel St. George in Brooklyn.

The 1935 Florida Index listed Hitt, his wife, “Sanford May Hitt”, and son, Robert, in Miami Beach.

In July 1939, Hitt filed his Social Security application which identified his parents as Samuel Hitt and Edith M. Altree.

According to the 1940 census, Hitt was institutionalized at the Mountain View Farm, the Home for Homeless, in Sanford, Maine. It was noted that he had four years of college education. It is not known when Hitt passed away. An obituary has not been found. Presumably, Hitt died at the institution.