Arthur Robert “Art” Krenz was born in Middletown, Connecticut, around 1905. Most of the U.S. Federal Censuses recorded his estimated birth year as 1905. Krenz’s birthplace was on his marriage record and his middle name appeared in some copyright catalogs.

The 1910 census listed Krenz as the youngest of five Connecticut-born children whose parents were Louis and Annie, both “Russ-German” emigrants. Krenz’s father was a weaver at a narrow webbing factory. The family resided in South Farms Village, Middletown, Connecticut at 9 Douglas Avenue.

According to the 1920 census, the family lived in Cleveland, Ohio at 3274 73 Street. Krenz’s father was the proprietor of a grocery store. Information regarding Krenz’s childhood education and art training has not been found.

At some point Krenz moved to Miami, Florida where he was a staff cartoonist for the Miami Herald in the mid-1920s. 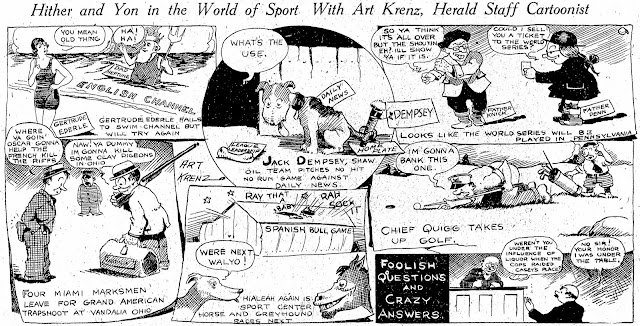 A 1927 Miami city directory listed Krenz’s home address as 1026 SW 4th Street and occupation as artist for the Miami Herald.

Krenz was a golf enthusiast who produced a number golf-related items for NEA. 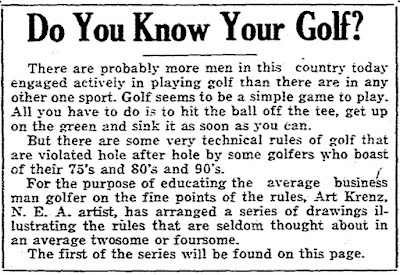 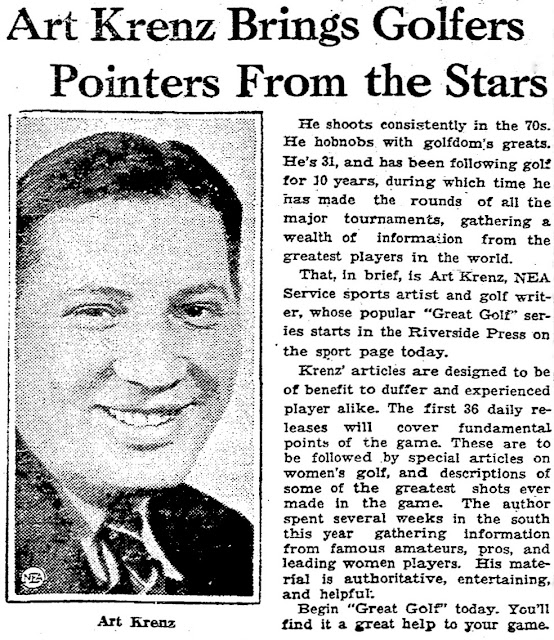 The 1930 census said newspaper artist Krenz lived his parent in Cleveland where he worked as an NEA sports cartoonist and writer.

The Owosso Argus-Press (Michigan), May 2, 1934, published this item: “Art Krenz, NEA Service sports cartoonist and golf writer has been granted a student pilot’s license to cut capers in an airplane, please omit flowers.”
According to American Newspaper Comics (2012), Krenz also produced, for the NEA, the following: Book of Knowledge (took over from P.V. Bessey), In This Corner aka Do You Know?, 100 Years of Baseball, Tale of the Turf and Baseball’s Big New Names.

In 1940 the couple owned their home at 4191 West 63rd Street in Cleveland. The census said they lived there in 1935, and Krenz had two years of college. 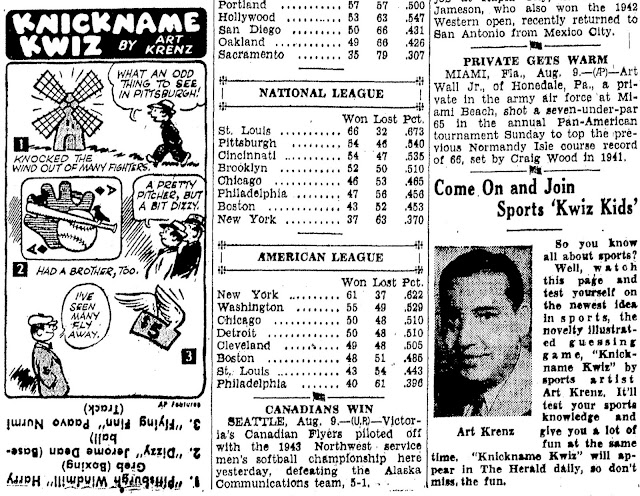 Krenz’s departure from NEA was noted in the sports section of the Greensboro Daily News (North Carolina), January 9, 1941: “Art Krenz, the talented cartoonist, has left NEA Service after 14 years….Krenz made many friends here last spring when he covered the Greater Greensboro Open and also with his cartoons which have appeared in this newspaper from time to time.”

Krenz passed away in May 1961, in Orange, Florida, according to the Florida Death Index at Ancestry.com. The Hartford Courant, July 10 and 11, 2015, published an obituary for Krenz’s son, Arthur Ludwig.

Comments:
Thank you for this information! Uncle Art died when I was just a little girl, so there's much of this I never knew about him - especially the stuff about his family. I was related to him through his wife, Hazel (my father's sister), so I can add one correction to your great article: Uncle Art never had children. He would've been a great dad though; he was a wonderful uncle. My aunt discouraged us from bothering him when he was in his studio, but if he saw us watching from the door, he would always invite us in and show us what he was working on. One of my favorite memories is sitting on his lap when he was at his easel creating the Christmas stencil book. He pointed at the manger and said, "Do you know who that is?" And when I responded "the baby Jesus" he said, "Oh good, I got it right."

You got me wondering about the possibility of Uncle Art having a child I was unaware of (Ludwig), so I did a bit of research and learned that Ludwig’s dad was also named Arthur Krenz and he, too, was from CT. However, Ludwig’s dad died in 1989, and his parents (Arthur and Anna) are buried in the Pine Grove Cemetery in Middletown, CT; whereas Arthur Robert Krenz (the subject of your article) died in 1961, and is buried alongside his wife Hazel, in Woodlawn Cemetery, Orlando, Florida.
Thank you again for your wonderful tribute.