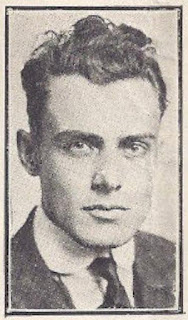 The 1900 U.S. Federal Census recorded Locher in Cerro Gordo, Illinois. He was the oldest of four children born to James, a retail druggist, and Capitola. His father was born in California and mother in Illinois.

In Artists in California, 1786–1940, Edan Hughes wrote: “Locher lived in Chicago before moving to southern California in 1921. Self-taught, his only art training was a correspondence course taken from Landon Cartooning School.” City directories and the census show that Locher lived in Los Angels much earlier.

Los Angeles city directories for 1907 to 1909 list three different addresses for Locher, a stenographer: 214 South Fremont Avenue; 514 South Figueroa; and 917 West 5th Street. The 1910 census has Locher and his wife, Etta, in Los Angeles at 1931 Darien Place. Locher was a stenographer for a paving company. A 1910 city directory named the business, Barber Asphalt Paving Company. In 1912 Locher was at 1318 Colton and two years later at 511 South Boylston. Locher was the assistant secretary at the California Arizona Construction Company in the 1915 city directory with his residence at 557 South Fremont Avenue.

According to American Newspaper Comics (2012), Locher’s earliest work was An Embarrassing Moment which he drew from March 2 to 8, 1916 and August 25 to October 1916. It was followed by There Was a Time (1916), The Pest Family and Barnum Was Right, both in 1917. All four had brief runs in the El Paso Herald.

On June 5, 1917, cartoonist Locher signed his World War I draft card. He lived at 1133 South Hope Street. Locher named William Randolph Hearst as his employer and wrote, “Work at home mail cartoons to N.Y.” His was described as tall and slender with gray eyes and dark brown hair.

The 1920 census listed Locher, but not his wife, in Chicago, Illinois, at 1726 West South Prairie Avenue. He was doing “cartooning advertising.”

Locher produced Cicero Sapp from 1921 to 1928. Every Man for Himself was the Sunday topper which began in 1926.

It’s not clear what happened to Locher’s wife, Etta. A 1927 passenger list has Locher and new wife, Jeanne, sailing from Havana, Cuba to Key West, Florida. New York City was identified as their home.

The couple has not been found in the 1930 census. During this year, Locher started the long-running Homer Hoopee on March 17. His involvement ended April 10, 1943; the strip was continued by others. Homer Hoopee was one of several new cartoons introduced in the Sarasota Herald (Florida), on March 16, 1930. (Editor & Publisher, February 8, 1930, was first to announce the lineup.) 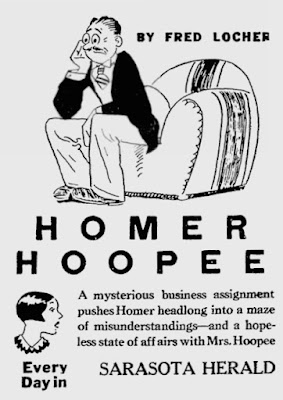 A 1938 Los Angeles city directory has a Fred Locher at 1817 Hillcrest Road.

Santa Monica was Locher‘s home in the 1940 census. He resided at the Charmont Apartment on “California & 4th.” The freelance cartoonist had completed four years of high school but no college.

Locher signed his World War II draft card on April 25, 1942. At the time he resided at 1201 North Crescent Heights Blvd. This address was crossed out and written in its place was 111 South Carondelet Street with the date September 28, 1942. Locher named the Associated Press as his employer. His description was five feet, ten inches and 125 pounds, with gray eyes and brown hair.

Mr. Locher started in the newspaper business as a child, at Cerro Gordo, Ill., his birthplace. His father, the town druggist, also published the weekly paper, and as Mr. Locher himself put it, “I made myself generally useful about the place.”

Comments:
I just came across a small drawing of Cicero Sapp by Fred Locher that he did for my grandfather's autograph book. The page survives, the book did not (long story.) I am looking to see if there is any value in this or should be donated someplace. Does anyone have a suggestion?