VISITORS' DAY AT THE JOKE FARM

From Pluck and Luck, Henry Holt, 1925 by Robert Benchley 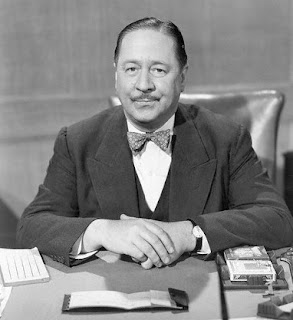 The wind blew gently along the porch of the Home for Aged Jokes. It was a pleasant time for sitting about and recalling the old days, the days when Puck and Judge were championing Grover Cleveland and the Full Dinner-pail respectively, and when Life had the same cover-design every week.

"I remember," said the heavy tragedian, who wore a shabby fur-trimmed ulster with one hand thrust in at the breast, and whose name was Junius Brutus Ham fat, "I remember the time when I was held to be one of the leading features of the magazine and was placed in a preferred position on the right-hand page following the poem of Cupid. It was the rather absurd pleasure to depict me walking along the railroad ties by a mile-post reading, 'New York—2ooM,' but I assure you—"

"Say, dat don't go wid me," said Dusty Rhodes, the tramp with a tomato can tied around his waist. "Me and my pardner Weary Wttlie seen you practically every day hittin' de ties when we wus cookin' our meals down in de hollow by de tracks. An' you was aluss in de same place, two hundred miles from Noo York. A fine walker, you wus. Nit!"

"Aw weally, you chaps make me vewwy ill," came a voice from behind the back of a large rocker where Cholly Sapleigh was sitting with the end of his cane in his mouth. "I was considered—aw-weally-don-cherknow—to be the-aw-best thing in the whole bloomin' field. A gweat many times they wan me in colors, with a weal yellow chrysanthemum in my button-hole of my box-coat, doncherknow. I have that box-coat upstairs in my trunk now. Shall I go up and put it on? Just for fun, you know?"

"If you do that," said Dr. Goodbody, the missionary, "I shall go out into the barn and get my old cauldron which I haven't been cooked in for twenty-five years. I understand that the cannibal chief who used to work with me in the pictures (by the way, he never returned that silk hat of mine that he used to wear) has a job over in town at a restaurant and we might persuade him to come over for an afternoon when he has his day off. He was really a good chap at heart, and in spite of the skulls and things scattered around his place, I don't remember his ever really eating me."

"It would have been all right with me if he had," muttered an angry man who came in from the street rubbing his toe. "That's the five thousandth time I've kicked that old hat out on the side-walk without guessing that the boys might have put a brick under it. You'd think that I'd have learned by this time not to give in to my impulses like that. It used to be only on April Fools' Day that the boys did it, back in the old funny-paper days, but the town boys here have got wind of my failing and never let a chance slip by to humiliate me."

"I used to be like that, heedless. I used to skate, day after day, just as near as I could come to the sign marked 'Danger.' But here I am to tell the tale." The fact seemed hardly worth boasting of, however, as the speaker hadn't even a name. He was just The Man Who Used to Skate Near the Danger Sign, and was sitting with The Man Who Used to Turn His Back to a Charging Bull and Say, "I Have a Feeling That I Ant Going to be Raised Today." Nameless heroes both, and soon forgotten.

As the sun grew hotter, the talk fell off. From the field in back of the house came the sound of pistol shots. Little Willie Bostonbeans, seated on a large volume of Browning, became philosophical. "Isn't it incongruous," he said, "that, deprived of a means of obtaining sustenance, we should be thrown thus on an eleemosynary institution, while those ordnance vibrations in the back yard would indicate that Alkali Ike the cow-boy is out there practicing shots at Willie Tenderfoot to make him dance, hoping that some day they may be called into service again. When one reflects, there is a bitterness about it all which—"

"Lydia, hasn't that young man gone yet?" called the Irate Father from the top of the stairs. "It's past eleven o'clock."

But there being no Lydia to answer, and no Young Man to go, the rest of the characters looked at each other silently and tapped their heads, indicating that the Irate Father was having another one of his spells.

Suddenly there came the sound of tiny feet pattering down the hall-way and across the porch and down the steps tripped a little girl holding onto her mother's hand. As she swept by with the cruel aloofness of youth, the pensioners heard her ask:

"Muvver, what did Daddy mean when he said—"

The rest was lost in the slamming of the door of the limousine into which the ever-young joke had flung herself.

"Where is she going, like that?" asked the tragedian.

"They are making up the first February number," said Dr. Goodbody, "and the editors have sent for her to come over and help them out."